This was on our wish list for a while now. Travel to Lapland, above the arctic circle, experience the snow and the cold, the wide open space and nature. Also, snowshoeing, dogsledding, going out in the wilderness with snowmobiles had also something to do with wanting to go to Lapland.

We chose to book our trip with Askja, they arranged our trip perfectly and to a location of our choosing. We really wanted to go far above the Arctic circle, the more north the better. We stayed near Inari, close to the lake, in a really nice hotel – Inari Wilderness Hotel.

We arrived in the dark after our flight from Amsterdam to Helsinki and onwards to Ivalo. By the way, I was really surprised that the domestic flight from Helsinki to Ivalo was about 950km. I figured this would be a short airplane ride, it turned out to be a 1 hour and 15 minute flight.

We were really really way up north and I loved it! Arriving at our hotel we had a nice warm welcome and dinner was already prepared. That night we quickly went out to the lake to look at the sky and see if there were any northern lights – no such luck – but it sure was cold, -25C.

Reindeer Farm
The next day we picked up our extra clothing, provided by the hotel. Extra boots and suit, winter gear to cope with the extreme cold. Although later I heard that the temperature was actually not that extreme, normal temperature this time of the year would be around -30/35C . So later we would actually experience “summer” as it was only -2C. That is an extreme jump in temperature.

The day started out quite relaxed. We went to a reindeer farm, the owner greeted us outside his home and directly introduced us to the reindeers. He really gave us an insight about the reindeer, the life in the wilderness and what the farmers do to protect the animals and the nature and area that they own.

After a considerable time outside it was time to warm up and get some nice hot coffee and cookies. The farmer had additional interesting stories about the indigenous people the Sami and the different groups of Sami in the area. This was a really nice story about the culture, language and the survival of this way of living. Really appreciated the time and effort he took to explain and tell his history and culture.

Snowshoeing
After a relaxing morning it was time for some action and adventure. That meant go out with a guide and group into the wilderness and do some proper snowshoeing. This was the first time for me and I really had fun after a few minutes of adjusting. The fun started with the group running through the snow and finding our own path, no restrictions! Really nice to go wherever you want. That gave me the opportunity to get some nice photos with the Fujifilm X100F, a nice companion that fits easily in a jacket pocket and powerful enough to get some epic shots!

With the sun low in the sky, the afternoon was a constant golden hour, so I wasn’t complaining. Our snowshoe adventure led us, with a detour around and over the hills (man that was a though challenge),to one of the many Finnish huts. I arrived there soaking wet and exhausted of our long hike – I had too many layers on and got too hot – so even in -25C you can get too hot! Once there we chopped wood, made fire and prepared a lovely local reindeer kabab style meal. This was a really nice treat to an even nicer afternoon hike.

Night safari & northern lights
All of the nights were filled with some sort of aurora – northern lights – hunt. We were lucky enough to get one really clear night with the northern light in the sky. This night was a night safari which meant going out by sleds and snowmobiles that, thanks to our lovely guide choosing a different route than normal, brought us to a small island with at tipi style tent and camp fire. This made for a really special and remote feeling, that this place was only and especially for us and no one else.

The northern lights started out quite faint, not the epic spectacle I witnessed in Iceland (series I & II), but after a while it came to life. The best part was that this time there was no moon, which makes the surrounding area a bit too dark to my liking, however the positive effect is that the milky way can been seen and was in the right place together with the northern lights. How cool is that!

Lake Inari
The next morning started out slow with a nice breakfast and a walk out on the lake. The sky was bluish with some clouds that were blown away by the wind. Together with the low sun and the white snow made for some really nice almost pastel like photos. The frozen trees, the fallen snow and the houses made the landscape perfect! I was in luck, the sun was out and due to the clouds and the snow the photos again have something special, almost painterly like.

Dog sledding
The afternoon of after the relaxing lake walk was all about dog sledding and how the trainers and dogs lived together in this wilderness camp. All the dogs were really well looked after and were more than happy to get us on the sleds and forwards through the backcountry. To be fair it is a set route which the dogs know with their eyes closed I guess. Nevertheless it was really cool to see the dogs up and go when they were in front of the sled. These dogs only have a full on or off. It’s laying down or going like speedracer.

The group of dogs are specially prepared and trained as some dogs go are better with some than others. In an extreme case, if given the change, they would literally kill each other – they’re just like humans, were not everyones best friend right? Sometimes it seems that they’re fighting or being really grumpy even during running, but in the end the dogs themselves towards humans are really relaxed. As hyper as they seem just before the ride, the relaxed they are when we were back and you could really cuddle them and take a closer look.

These were Alaskan huskies, they’re a cross-breed, perfect for lighter and longer rides. They even can go up to a whole day of running. However they are not as strong as the iconic Siberian husky. This breed is much bigger and stronger, but can’t run the distances the Alaskan ones can.

All in all a very fun and informative afternoon. I would really would love to do dog sledding again. It’s so much fun, hard work and a real kick when you can work together to get the best ride.

Snowmobile into the wilderness
The last day was all about adventure on snowmobile. The morning we went out to go ice fishing. It was really fun, did not catch anything, but with our really friendly and relaxed guide we had a blast!

This was the setup for an additional afternoon of going out and going fast on snowmobiles. I’d asked the guide if he had anything to do that afternoon. If not then he could take us on a private tour on the snowmobiles. He said that he was fully booked already that afternoon and that left me a bit bummed. On the way back he managed to take us to a small group of reindeer, where I could shoot some nice winter reindeer photos in the wild.

When we arrived at the hotel, our guide already talked to the desk and arranged to go out with us on snowmobiles. How cool! The level of service and friendliness was top notch. Ow and the other group which he was planned for, got a really nice guide as well – we didn’t steal him away – well sort of. Sorry.

That meant we were off with the snowmobiles from mid afternoon till the beginning of the evening. When went on a 2-ish hour ride. Which took us into the wilderness, small paths through forests and onto other lakes, where we were able to hit the gas and get the snowmobiles up to real speeds! It was an epic afternoon. I even had time to take some winter landscape photos.

We were in Lapland for only 3,5 days, but with the excellent care, hospitality and the adventures it felt like we were away for a week! I really really recommend you do something like this if you like cold, snow, wide open landscapes – just go and experience this unique area in Finland (or Sweden or Norway). 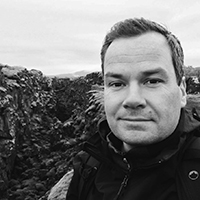 Robert Doeleman, self educated photographer, photo lover and gadget freak. I like to roam around in nature and really get immersed in the landscapes I photograph. I do this because I love this, because it’s my passion and trying to capture the world as I see it.
In daily life I’m a Business analyst and UX strategist, creating new websites, new digital processes and help companies in general to transform their business into a digital one.

Robert Doeleman, self educated photographer, photo lover and gadget freak. I like to roam around in nature and really get immersed in the landscapes I photograph. I do this because I love this, because it's my passion and trying to capture the world as I see it. In daily life I’m a Business analyst and UX strategist, creating new websites, new digital processes and help companies in general to transform their business into a digital one.

Posted on November 11, 2020November 11, 2020by Jakub Gráf
Hello everybody, let me introduce myself. My name is Jakub Gráf, but you may find me as @zahorizont and @grafworks_leathergoods on Instagram. My main focus is portrait photography…
END_OF_DOCUMENT_TOKEN_TO_BE_REPLACED
Categories INSPIRATION

Building myself as a better photographer

Posted on December 13, 2020December 11, 2020by Stefan Panaitescu
Sometimes you are lucky. Sometimes you don't search for anything and you have a small moment of inspiration. I will enter here, I will try this, where does this road lead? Surp…
END_OF_DOCUMENT_TOKEN_TO_BE_REPLACED
Categories INSPIRATION

Posted on January 1, 2021December 29, 2020by Lin Qi
My name is Lin Qi, and I am from China. I live in New York. I am a photographer, but I also do other jobs to fund my photo projects. I love photography more than anything else.…
END_OF_DOCUMENT_TOKEN_TO_BE_REPLACED
Categories INSPIRATION

Who do I take pictures for?

Posted on November 5, 2020November 4, 2020by Marcelo de Coghlan
When I began to train in photography 30 years ago, in Buenos Aires, one of the almost obligatory steps was to belong to a photography club. In addition to technical training, atte…
END_OF_DOCUMENT_TOKEN_TO_BE_REPLACED