My wife was surprisingly OK when I mentioned I was after a new companion to keep me company on a daily basis. She probably knew before I did that the time was coming where a new camera would enter the household – the companion I wanted was to help eradicate those moments where I’d remark “if only I had a camera with me”. Until now I’ve been getting by using my mobile phone, there are some very good cameras on mobile phones but sadly the one on mine, the otherwise very good Moto G, isn’t amongst them. So the search has been on for a little while for a compact camera to fit the bill (n.b. I know I could have upgraded my phone but I wanted to keep the separation).

My initial intention was to buy a genuine pocket camera that allowed full manual control and should I want to, the ability to edit RAW files – I was looking to spend in the region of £200-£300. This was to be a camera that would compliment my existing camera, the Fujifilm X-T1. I love my X-T1, I have no regrets about my decision to trade in my DSLR for it however despite its smaller size, it’s not quite proved to be a camera for every moment. This isn’t completely the fault of the X-T1, the reality is that when I take it anywhere the temptation to bring filters, a tripod etc means there’s a lot to carry. So the search was on and at that price I was looking at cameras such as the Canon S120 which a relative of mine uses and I know to be a good camera and the Fuji XQ1. My wife is getting into photography herself and so we bought an XQ1 for her, which I was going to try to see how I got on with a pocket camera. Pretty well it has to be said, though I was starting to come to the conclusion that I wanted a camera with slightly more immediate control.

Around this time my criteria started to widen. Perhaps a bit more money could be found for a camera I intended to use regularly. Perhaps it didn’t have to quite fit in my jean pockets. Perhaps I didn’t need a zoom. Perhaps the X100T from Fujifilm was an option. Perhaps, perhaps, perhaps….

Three things caused me to give serious consideration to the X100T.

Firstly, a number of photographers I know/am aware of swear by it for certain applications – it’s hugely popular amongst street photographers for example (n.b. I don’t shoot street – I did though start this year thinking I should photograph the people in my life more often). Now I could have just bought the 27mm pancake lens and used that on my X-T1 but that brings me to the next reason. Sometimes choice can be limiting – ‘what lens should I take’, ‘if I take that, should I also take this’, ‘do I really want to be carrying all of this, ah, I’ll just leave it all behind’. The problem with my X-T1 as I stated above is that it never comes alone. The desire to buy a compact was about the separation of the two sides of photography in my life – the more serious one about creating and the other about just recording things on the fly as I see them, both of which are hugely important to me. I find being behind a camera incredibly relaxing and enjoyable – I welcome more opportunities to be in that position. Finally, I’ve also never owned a fix focal length camera (camera phones aside) – I knew I’d either love it or hate it but it felt like a challenge I was ready to take on creatively. So finally, I did what I always do and refer to my good friend Gordon Laing and his review of the camera was the final nudge that pushed me over the edge. No more perhaps.

So how have I got on. Well, the camera was bought just before a trip to Portugal. It was primarily a pool holiday so there wasn’t going to be a massive amount of photography opportunities – perfect for my new camera. I travelled light. 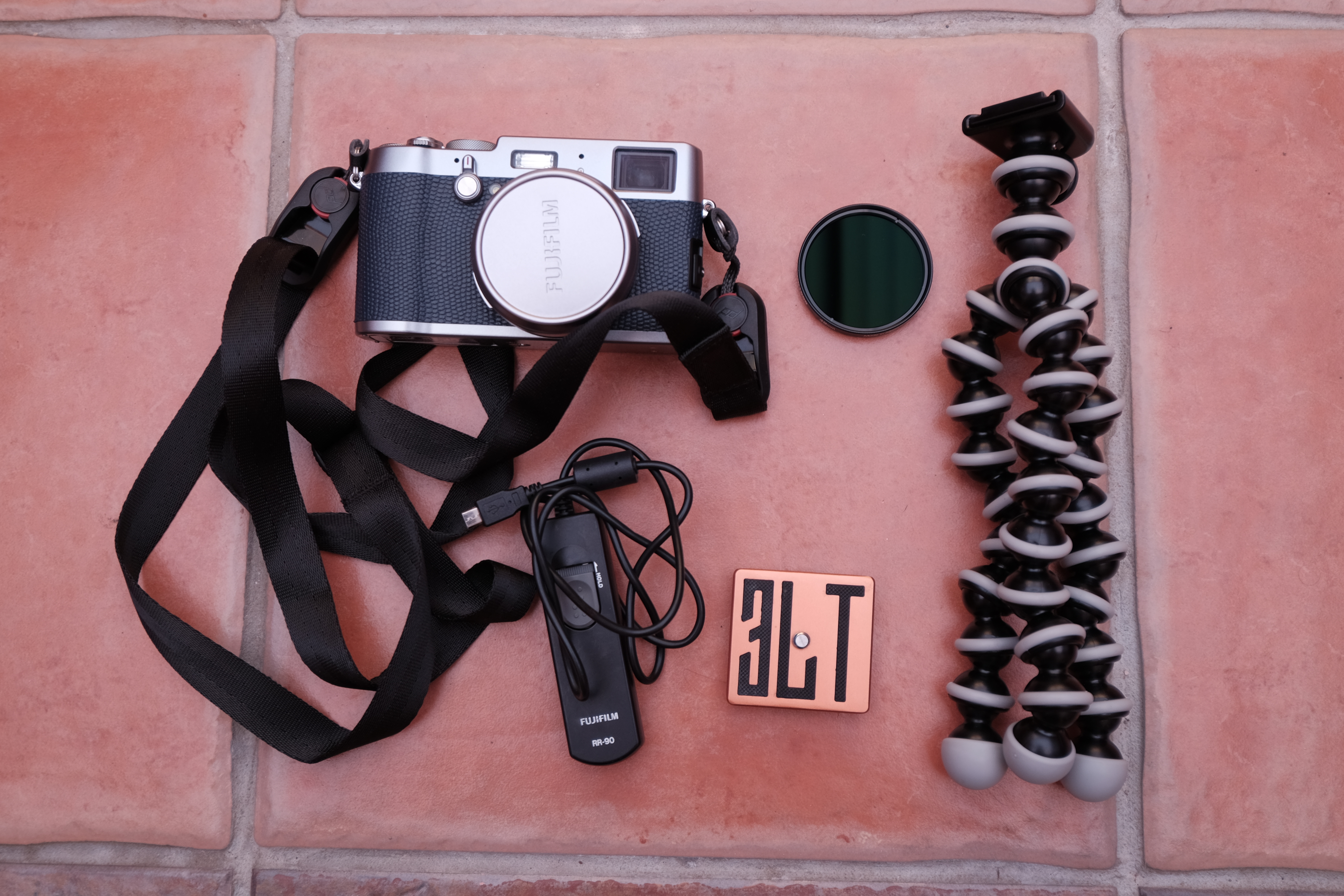 A couple of points to note, yes, there was a 3LT tripod in my case which isn’t shown in this, so perhaps not that light but certainly much lighter than last year when we visited the same location and I had my full camera gear – a bit more on long exposure photography later but note how small that 10 stop ND filter is! Also, one down side to Fuji cameras is the cost of genuine accessories, however I was pleased to discover the remote shutter release was the same for the X100T and X-T1 (unfortunately, the batteries aren’t).

So I mentioned it was a pool holiday right?

The camera was nearby throughout the week and when the clouds rolled in on this particular day the reflection on the water which I’ve photographed a few times was particularly good.

Where the X100T came into its own was when I visited the little Quarteria fish market. It’s unusual for me to go around photographing strangers so I was a little self conscious but the T just seems the right tool for the job in this application. Conscious of my own lack of skills (note to self, learn how to zone focus), I relied on the camera AF here. Unsurprisingly a few photographs missed focus but the keep rate was pretty good all things considered and I really like the ones I’ve kept. Perhaps a bit more of this type of photography is in my future. 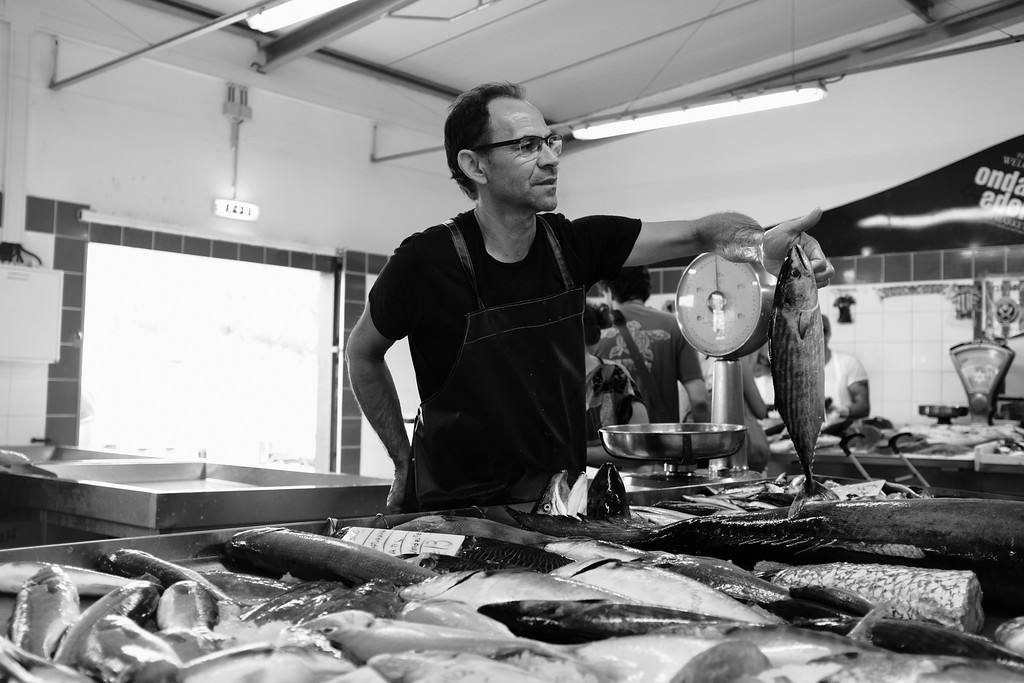 Unlike the pool photograph, where I edited the RAF file at home on my PC using Lightroom and Photoshop – the photographs above were out of camera jpgs using the black and white R film style and adjusting the shadow and highlight settings. There’s a few more from the trip here.

I’m looking to use instagram more these days – I know it’s not for everyone but I like it as a ‘sketch book’, something that is separate from what I see as my main photographic interests (though I do post some of my LE on there), it’s more a social every day thing – this is your queue to hook up with me on there! This first photograph is one of the holiday photographs I took (I took more holiday photographs this time out than any holiday I can remember for years).

It also allows me to capture things like this (back home, this is the ceiling of a local tapas bar), those little things that catch your eye where previously I’d have gone “if only I had a camera with me” – which, if you remember, was one of the reasons for wanting a camera. So its working out so far.

So I said I’d talk about long exposures. One of the first things I did when I got the camera was headed to the beach to try out the 10 stop filter I’d just picked up. A note on that, thanks to Matt Hart for the tip that you can just put a filter on back to front rather than having to buy the adaptor if you don’t have/want/need the additional lens hood.

The above is an edited RAF and the results were as impressive as I have come to expect from my X-T1.

So it’s all been good then? Well, not completely. The first isn’t the fault of the camera necessarily – it’s designed to have a fixed focal length, so it isn’t a flaw. However from time to time I did wish it was a little bit wider or a bit longer. For example, when I visited the beach for the long exposure, the original subject I planned to photograph was an old pipeline but it just didn’t suit this focal length. I know there are converter lenses available but my thinking is that if I was to buy those, then I’m moving down the line of an interchangeable lens camera and that isn’t the intention. That said, there were times when I loved the focal length, the trip to the fish market was a prime example, forcing me to get into the action rather than taking advantage of a zoom and being that bit distant. To my mind, this was expected and it is something I’m starting to live with, no scratch that, it is something I’m starting to enjoy. It’s a serious consideration though when buying this type of camera – if you’re not prepared to use your feet and/or get close, you’re probably not going to enjoy the experience.

There’s the occasional wobble where the electronic overlay on the optical viewfinder doesn’t seem to display properly and I’m forced to fiddle around with the on/off switch for a moment – I haven’t had chance yet to check whether this is a common issue or perhaps a fault in the camera I have. Whilst I’m mentioning the EVF/OVF, as a glasses wearer, I do find at times the sensor doesn’t pick up the fact that I’ve the camera to my eye so I have to push it a little closer. I’ve not mentioned the really cool OVF picture in picture function to help with focusing (and to hide the lens creeping into the corner). It’s incredibly clever, it’s one of those things that I’ll never get bored of showing to people who share a bit of technology geek tendencies – it’d be wrong to call it a gimmick but I must admit I don’t use it as often as I thought I would. That might be due to getting used to its existence – perhaps I’ll update this in future when I’ve used the camera more.

The biggest draw back though is the lack of an articulated screen (and to a lesser extent weather sealing). This is something I love on the X-T1 and it is sorely missed here. In the fish market it would have been ideal being able to review the photographs, similarly with the photograph of the pool, I was effectively shooting blind as I had the camera just a centimetre or two off the ground.

So how is the X100T fitting as an every day companion? It has to be said, really well so far. It has gone with me every where I’ve gone since I bought it. It weighs next to nothing so it’s no burden having it on my shoulder and when I do stop off, say in a cafe, I don’t have the trouble of trying to find somewhere to put my camera bag and the rest of the gear. Which reminds me of the last point. Cameras have always just been a tool for me. I have a good friend who’ll tell you about the beauty of cameras.

I’ve never seen it. However, you put the X100T on a table in a cafe and you can be sure it’ll catch the eye of someone. I’m starting to understand why people hold cameras as objects of aesthetic value.

Here are some other random photos from the past month or so…. 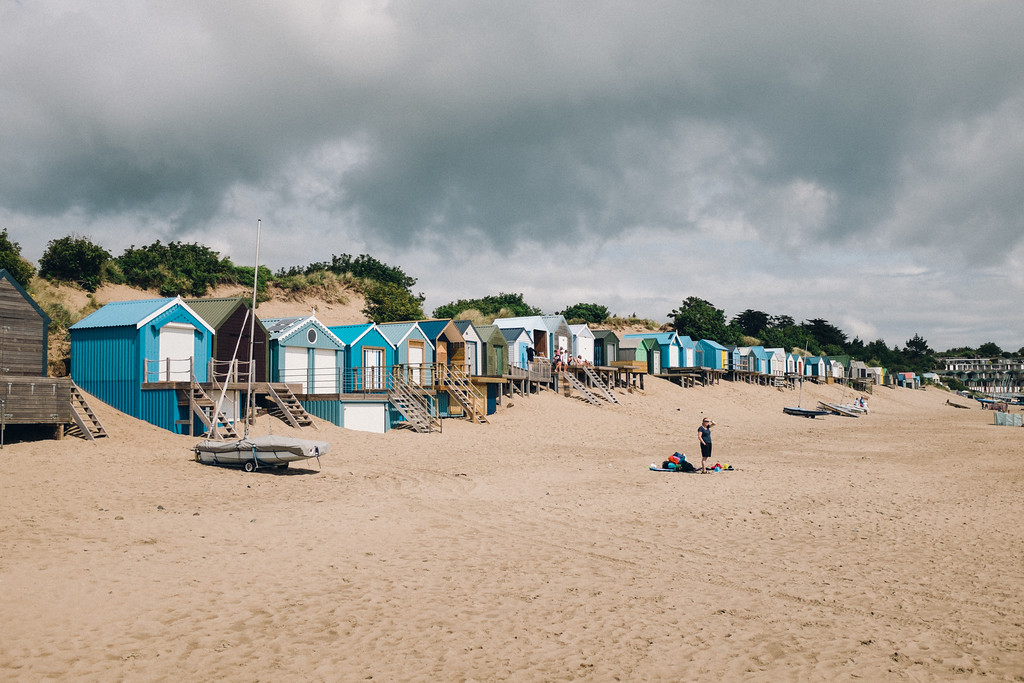 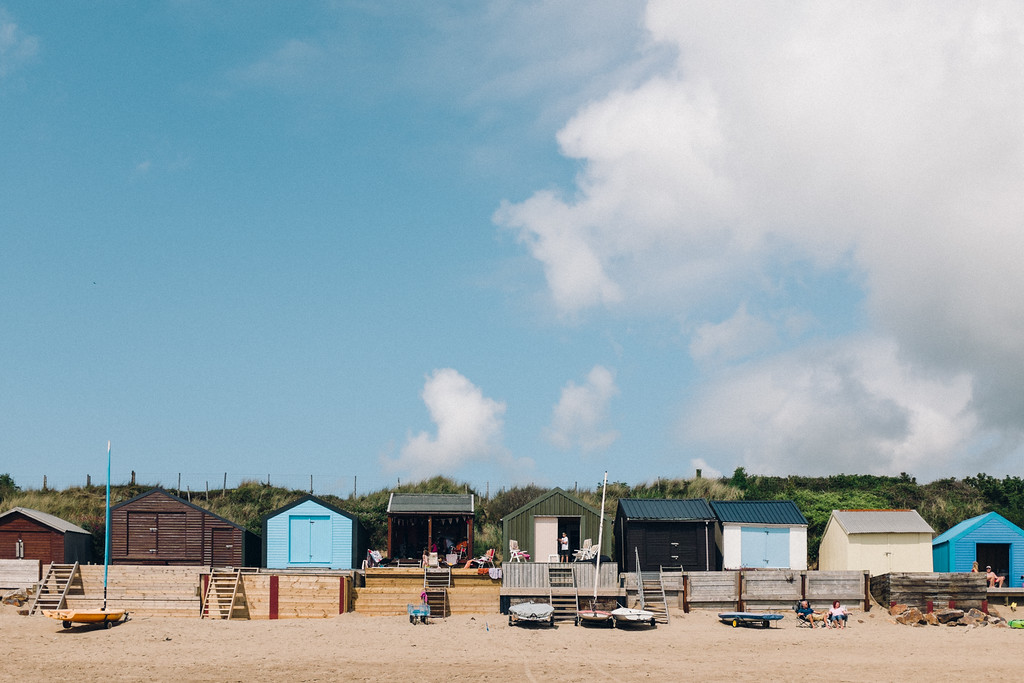 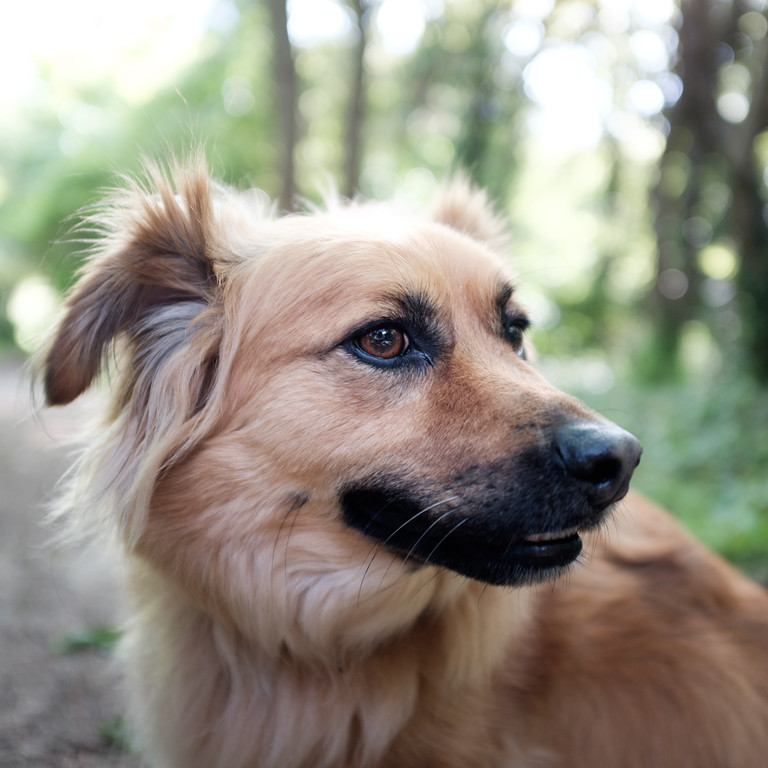