I’d wanted to do a star trail shot for quite a while but never really got around to it as the only places I’ve been to where the sky is dark enough and I have been far away enough from light pollution have all seemed to be freezing cold, and not really the kind of places you want to spend an hour or two waiting around to record the stars moving across the sky.

Last year however I went to Indonesia and was planning to shoot the volcanic caldera of Mount Bromo, which is a long way from any light pollution and also isn’t freezing cold (although despite being on steamy Java is still high enough to be pretty cold at night, and I was thankful to have layers and a lightweight down jacket).

The secret to any night time shot is to get as much light onto the sensor as possible using a combination of a wide open aperture, a long shutter speed and a high ISO. I decided to use the XF 14mm f2.8 lens as it would allow me to shoot at a slightly lower ISO than I would with the 10-24mm f4, and therefore have slightly more quality in the final image file.

To get the trails to have a decent length you need to capture at least an hour of the stars moving across the sky. As I was planning to shoot exposures of 30 seconds with no interval between each image, that works out at 120 exposures. Just to make sure though, I arrived a little earlier to give myself time to shoot 150 exposures. I was a little concerned about the battery running out, so I made sure I had a freshly charged battery (as well as a couple of spares just in case) and to save as much power as possible I switched view mode to EVF only with eye detection, so the camera wouldn’t use the LCD, and would only activate the EVF if it sensed my eye close to it.

I aimed to start the exposures around two hours before sunrise, which meant while the majority of the images would be taken in complete darkness, the last images would be in the blue hour of pre dawn giving me some colour in the sky and a little indirect light on the volcanic peaks.

When I arrived at the location I’d scouted the day before, although the stars were incredibly bright I couldn’t see anything of the caldera in the darkness of night which made composing a little difficult. I upped the ISO to 3200 and took a 30 second exposure. The resulting image gave me a clear silhouette of the peaks so I could orientate my composition, and through trail an error I was eventually able to make sure my camera was pointing where I wanted it to be with nothing obstructing the view. It also meant I could check the focus, although the only thing I could do here was switch to Manual focus and set it to infinity. I ensured that I had lots of sky in the frame as I wanted the star trails to dominate the image.

When the camera was composed and focused exactly where I wanted it to be and the tripod was completely secure and stable, I set the ISO to 1000, which I knew would be enough as the stars were so bright In other situations without such a dark sky I would probably use a higher ISO of around 2000. I then set the shutter dial to T and set the shutter speed to 30 seconds with the aperture opened on the lens to f2.8

Before started shooting the images with the intervalometer I ensured that Noise Reduction was turned off (I always keep it turned off, but it doesn’t hurt to check) as this slows down the camera and stops the shots from being continuous.

The X-T1 (and other X series cameras) have a really intuitive intervalometer which is easy to set up and start. In the second screen of the Menu, I selected Interval Timer Shooting, and then in the next screen selected the interval between shots and the number of shots. It’s impossible to set an interval of 0, so I just set it at 1 second and then the number of shots to 150. 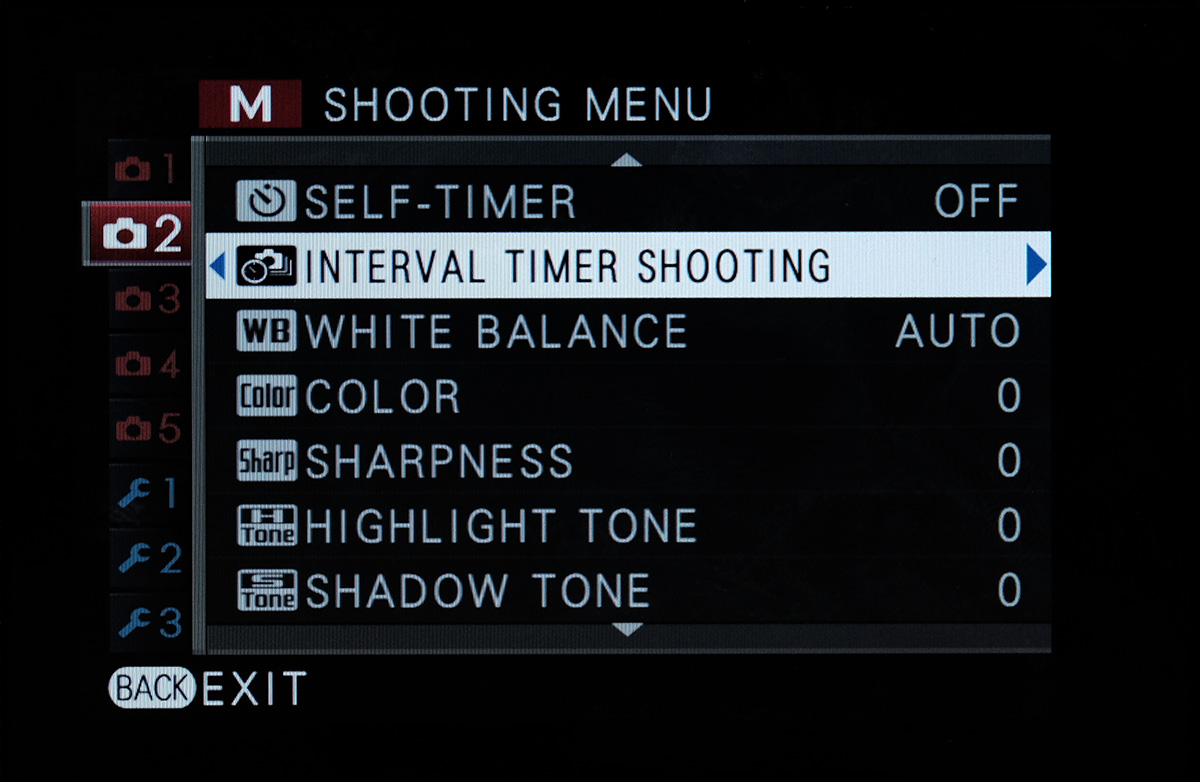 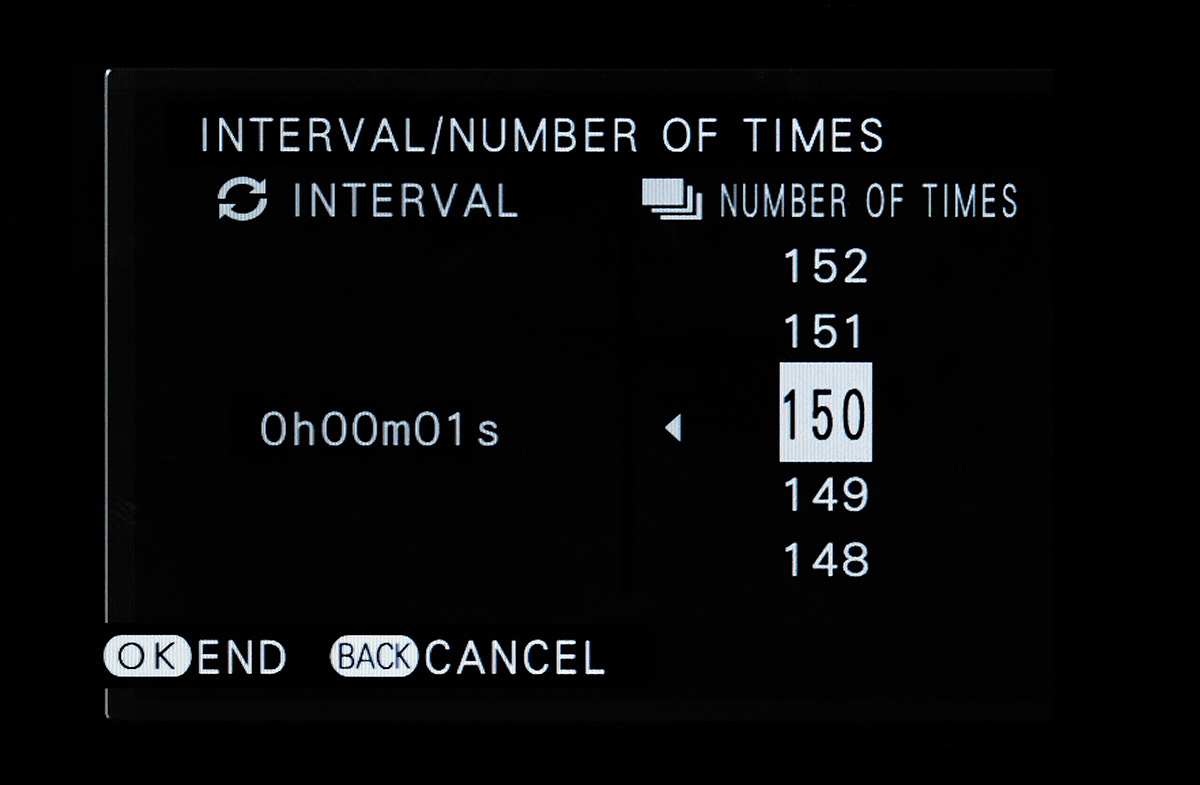 In the next screen I set the Start Waiting Time to 0.00, which means the sequence started shooting the moment I pressed OK. 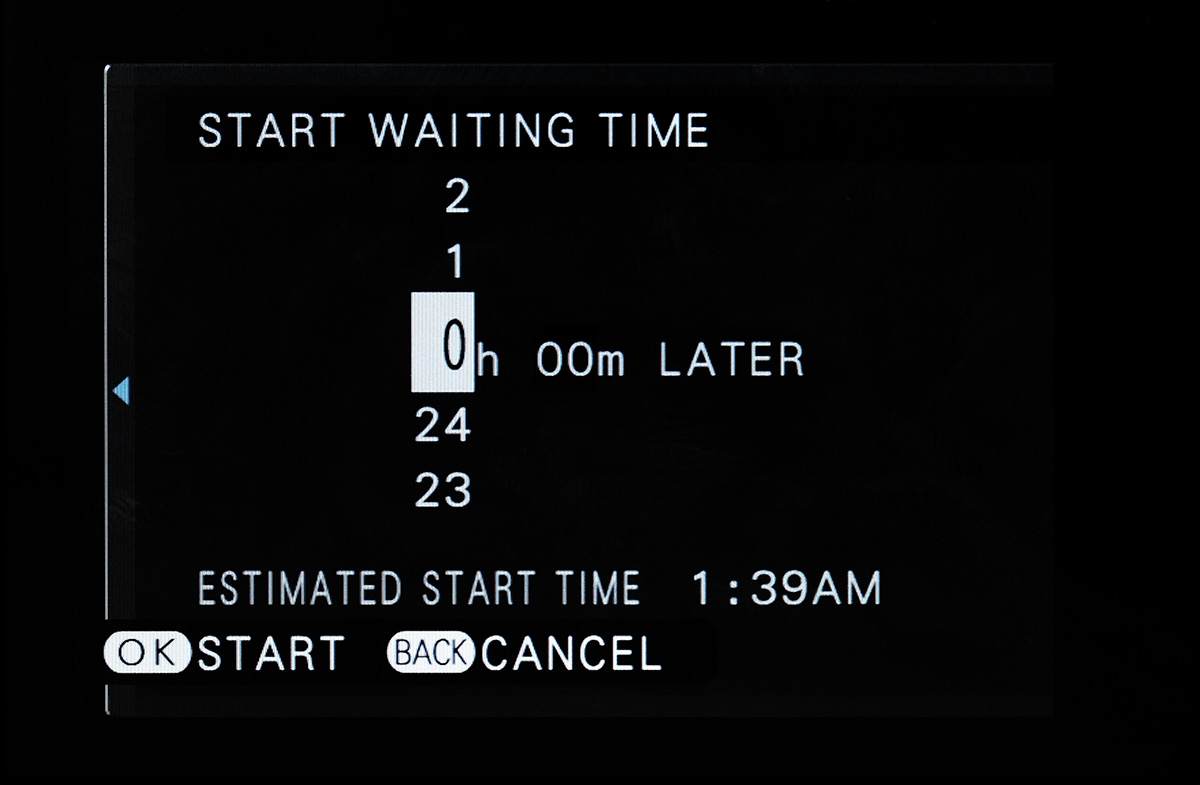 After that, I just sat back and waited for the time to pass while the camera kept shooting it’s exposures making sure not to nudge the tripod or camera in any way.

After an hour or so the waiting was over and the sky was getting brighter. Before moving the camera I checked all the exposures were there, then carried on shooting the sunrise as I would a normal dawn.

The next step was processing and putting together the star trail image. After uploading the files to Lightroom I made some adjustments to the images before exporting. I boosted the Blacks to +25, increased the Contrast to +40, and than increased Clarity, Vibrance and Saturation a little. I then went to the Detail section and increased Sharpening and then both Luminance and Colour Noise Reduction. I made these adjustments to one RAW file and then used Synchronise Settings to copy the adjustments across all 150 images.

The next thing is to convert the images to JPEG. I’m not sure whether Photoshop can import 150 TIFF images as it would be a massive amount of data, and even processing all the images as JPEGS takes a lot of processing power and RAM. I know of some photographers who, when doing star trails, only export the JPEGS at 72 pixels per inch and reduce the image size. This is fine if you only ever want to use the images on the web but I knew I would want to print this image so I exported all the images at full size and 300 pixels per inch. This takes quite a while, so you have to be patient here.

At this point you have a choice, you can assemble the star trails in Photoshop, or if you have some specialized software like StarStaX, you can use that. I used Starstax, but I’ll describe the process for both.

StarStaX is a great piece of software for doing star trails. First I selected all the JPEGS and then dragged and dropped them into the software. Then just click Start Processing and watch the image being created. By deselecting images on the left it’s possible to keep adapting the image a little, for example I deselected the last 20 or so images taken during the blue hour as they were making the image too bright and diminishing the star trails.

There are also some options on the right hand side of the software under Preferences that can be tweaked. I ticked the Comet Mode box, which makes the star trails gradually fade away 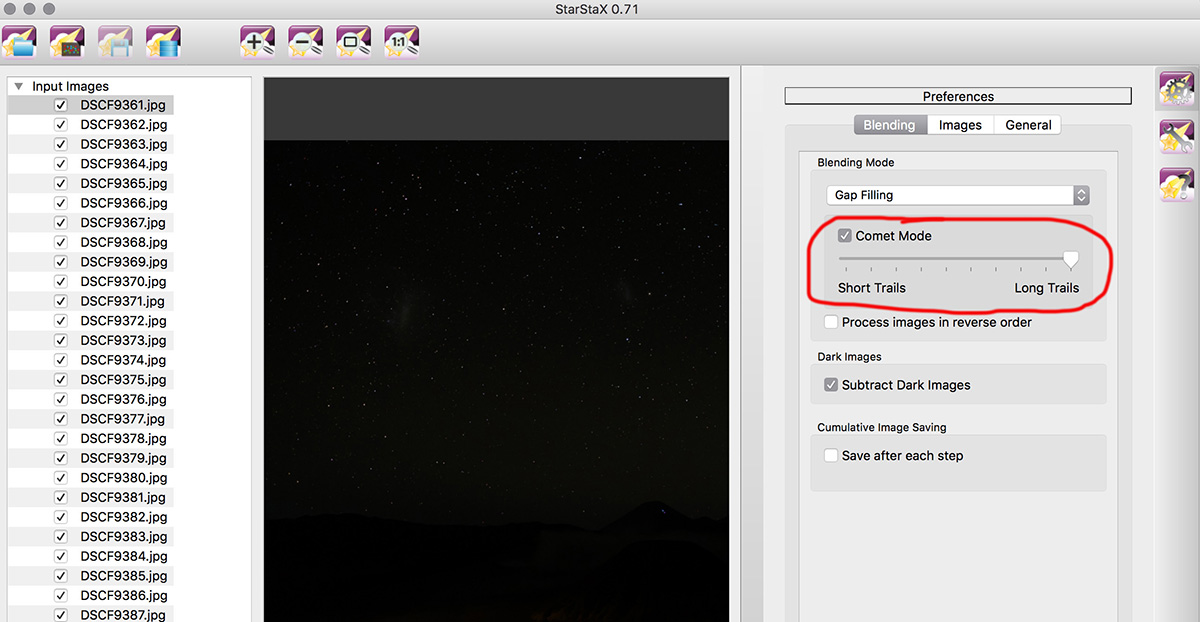 And that’s it, just hit save and the base image is done and ready for final processing.

If you don’t have StarStaX then you can assemble the star trails in Photoshop. First, reimport all the JPEGs you created back into Lightroom, then select them all and then right click. Select Open As Layers in Photoshop 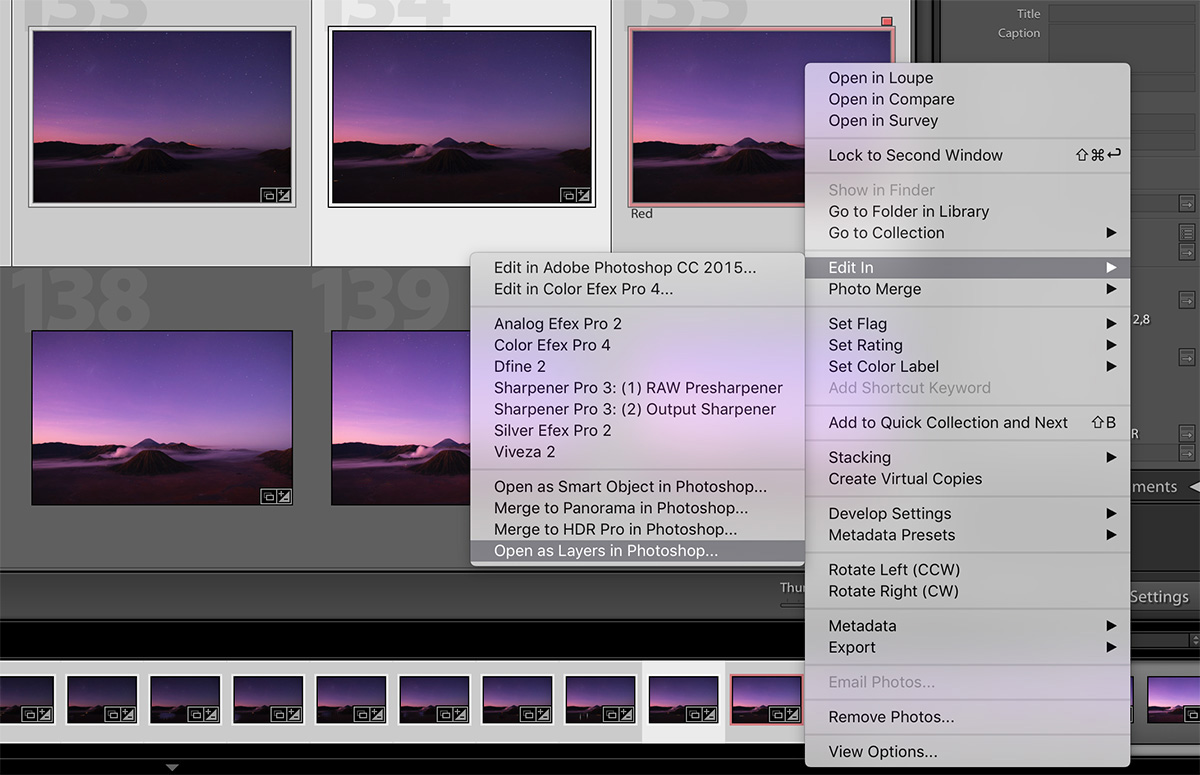 Again, this might take a while, but when the process is finished you’ll see all your images saved as different layers. The next step is where you change them into star trails. Select all the layers by clicking on the top layer, holding down Shift, then scrolling to the bottom layer and clicking on it, and then just changed the Layer Blend Mode to Lighten.

That’s it! All the layers will blend together giving you star trails! If you want to try to create the commet effect, then you can reduce the opacity a little more in each layer. When you’re happy with how it looks, merge all the layers and you’ll have your final merged file ready for processing.

From here on, whether you’ve done the image in StarStaX or Photoshop, all that remains is final processing of the image. I worked on contrast of the mid tones and lights using Tony Kuyper’s Luminosity Masks, and then did a little colour work using the Brilliance/Warmth filter in Nik Color Efex Pro. All of this was done on separate levels in Photoshop until I was happy with the final image. Then I just flattened the image and it was ready to print or resize for the web.

The intervalometer on Fuji X Series along with free software like StarStaX make shooting star trails really easy. All you need is a dark place away from light pollution and a tripod and you can give it a try!

How to edit and apply ‘sharpen’ to pictures from Fuji X-T1 in the Lightroom Fuji X70: The little street shooter that punches above its weight class