Even the very name is redolent of past times, often characterised by sticking an e one the ende ofe everythinge. It’s a small, picturesque pre-Domesday Book village in the Surrey hills, largely famous for some of the rules of cricket being first applied there in the 1720s. Today it is a sleepy, partly privately owned hamlet that looks like something out of an episode of The Avengers (the proper ones, not the costumed clowns); one expects Steed and Emma Peel to stroll around a corner at any moment.

I was in Peper Harow last weekend because the Surrey Union Hunt host Point-to-Point horse racing meets there. For the uninitiated, Point to Point is like steeplechase, but tends to be run cross-country. Steeplechase itself got its name from jockeys using the steeples of nearby churches as navigation points while racing. 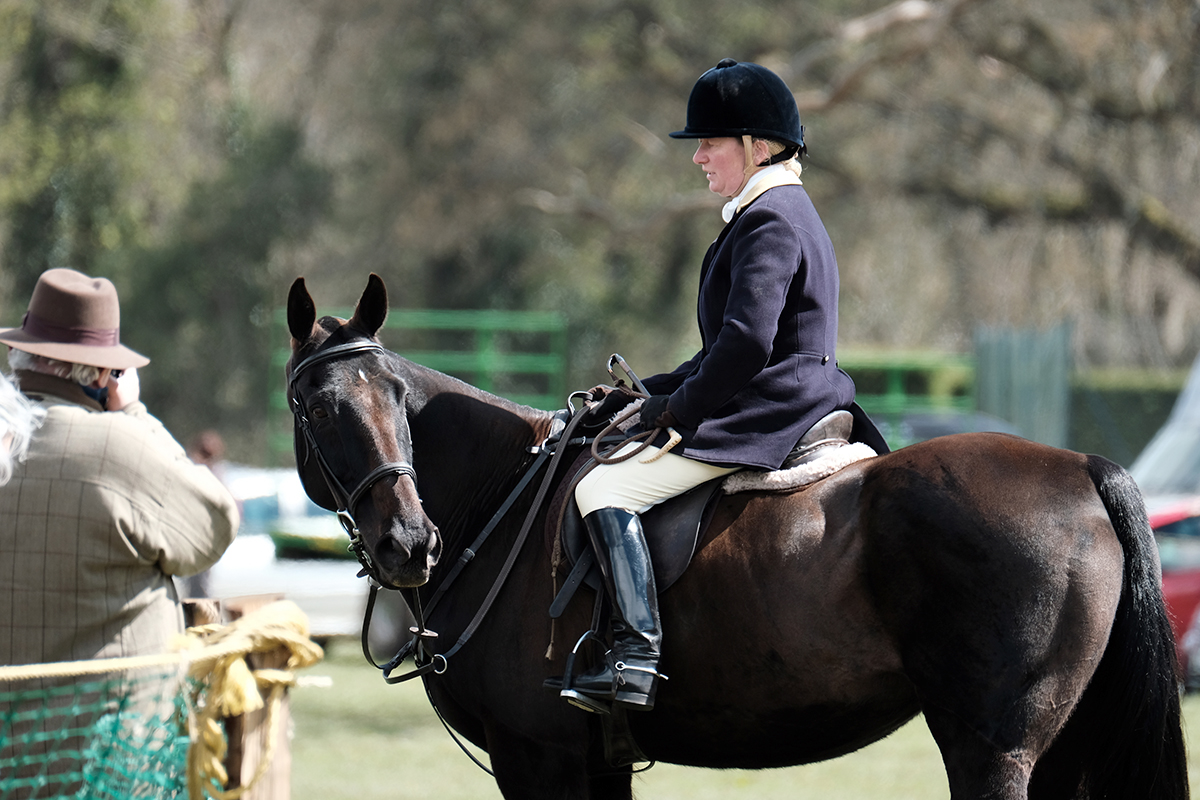 Now, I confess I have never been a horse racing person. I drew the winner once in a Grand National office sweepstake and that is the limit of my involvement. I know that it is very popular but it has never really appealed to me. Likewise the closest I have ever got to actually placing a bet on anything is listening to Kenny Rogers’ “The Gambler”. However, this seemed like a good opportunity to give the X-Pro2 and the XF100-400 an outing to capture some fast-moving action. 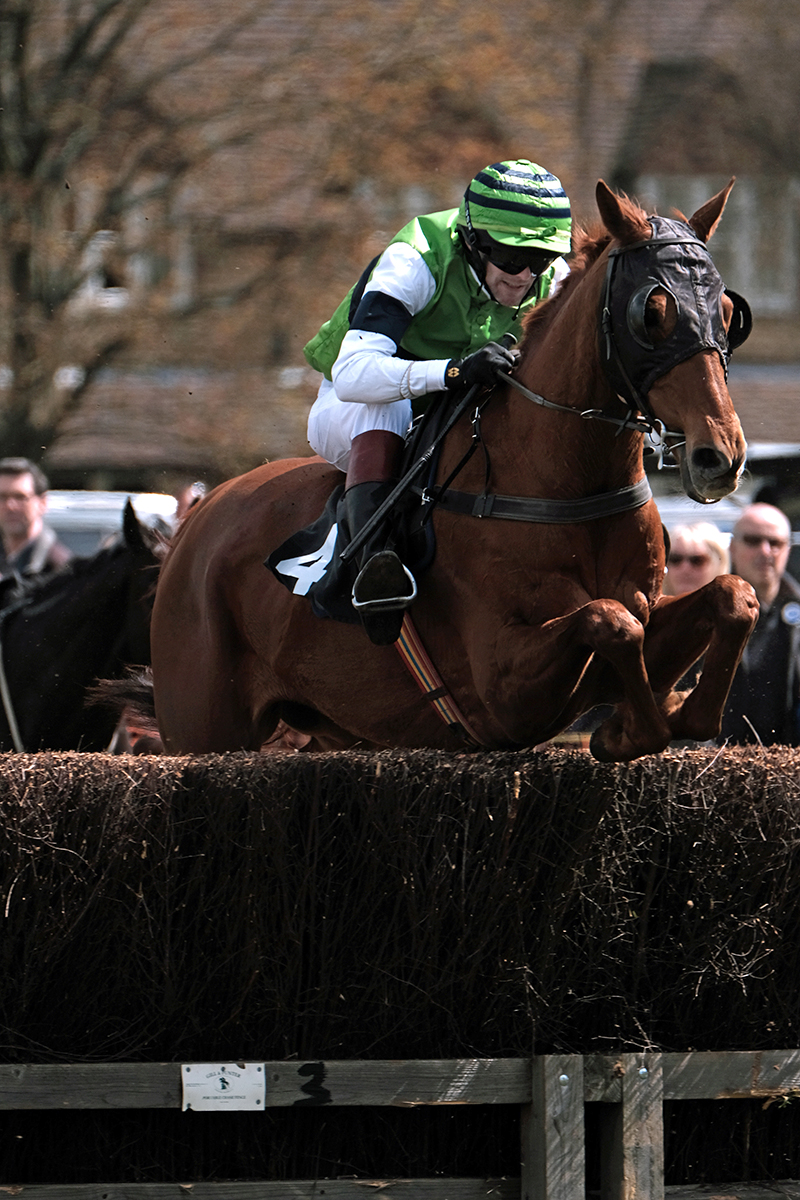 I know some have queried the wisdom of sticking a bazooka like the 100-400 on the relatively diminutive X-Pro. Surely, they reason, it is better with a DSLR-style form factor such as the X-T1 and soon-to-be 2? Probably—but this has always been my intent to the extent that I actually sold my X-T1 to finance said lens.

My logic is, I think, sound and certainly more unimpeachable than a Brazilian President. I am not an SLR-person. I enjoy and am very familiar with the “rangefinder” form factor. To that end I really only used the X-T1 at airshows, cricket and rugby matches and so forth where the snappier autofocus and faster drive gave me an edge over the X-Pro1. Even then I am at heart a sniper rather than a machine-gunner and only ever fired short bursts rather than “spray and pray”. 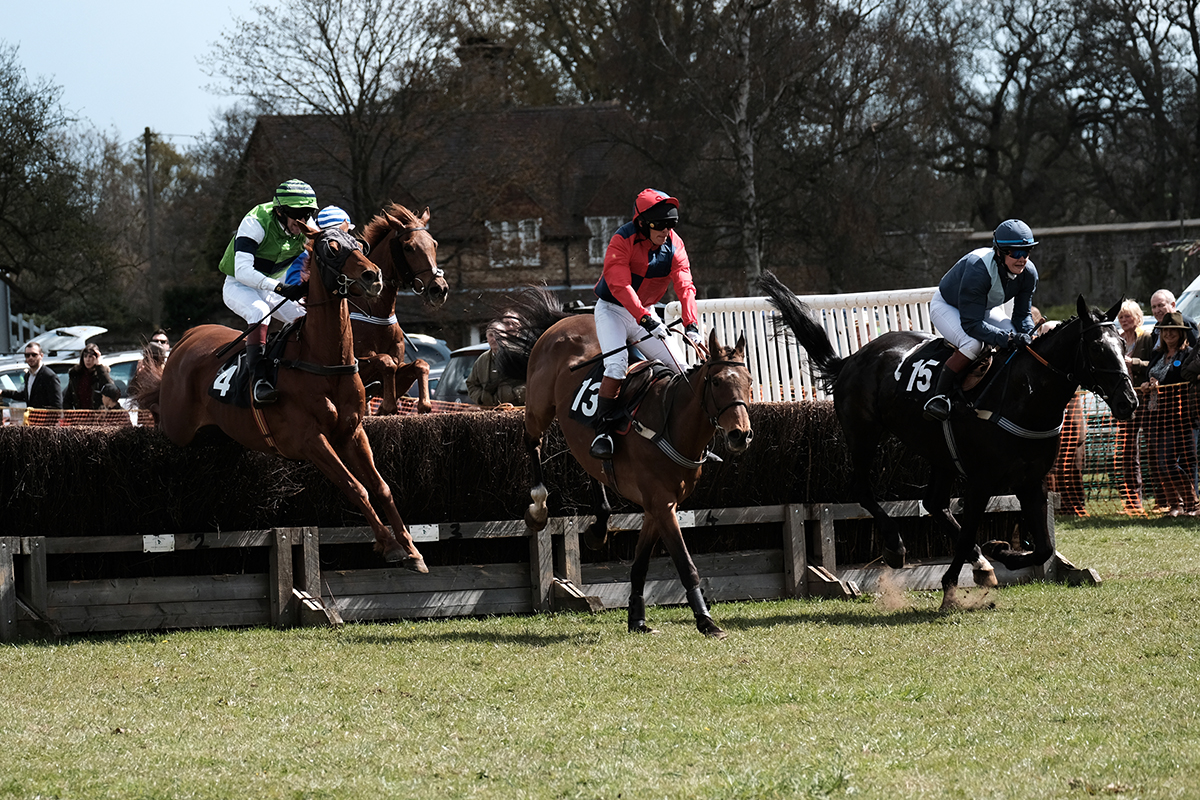 Two things really count against the X-Pro2 when it comes to long-lens action photography; grip and battery life. Let’s explore them one at a time, although to an extent they are related.

I had the vertical grip for my X-T1 and very good it was too. The addition of a chunkier hold, vertical release and extra battery life was welcome, and I confess I was disappointed that the X-Pro2 has no such capability to the extent that I think Fuji missed a trick—either that or it’s a deliberate decision to keep it an X-T only feature to help differentiate the two ranges. 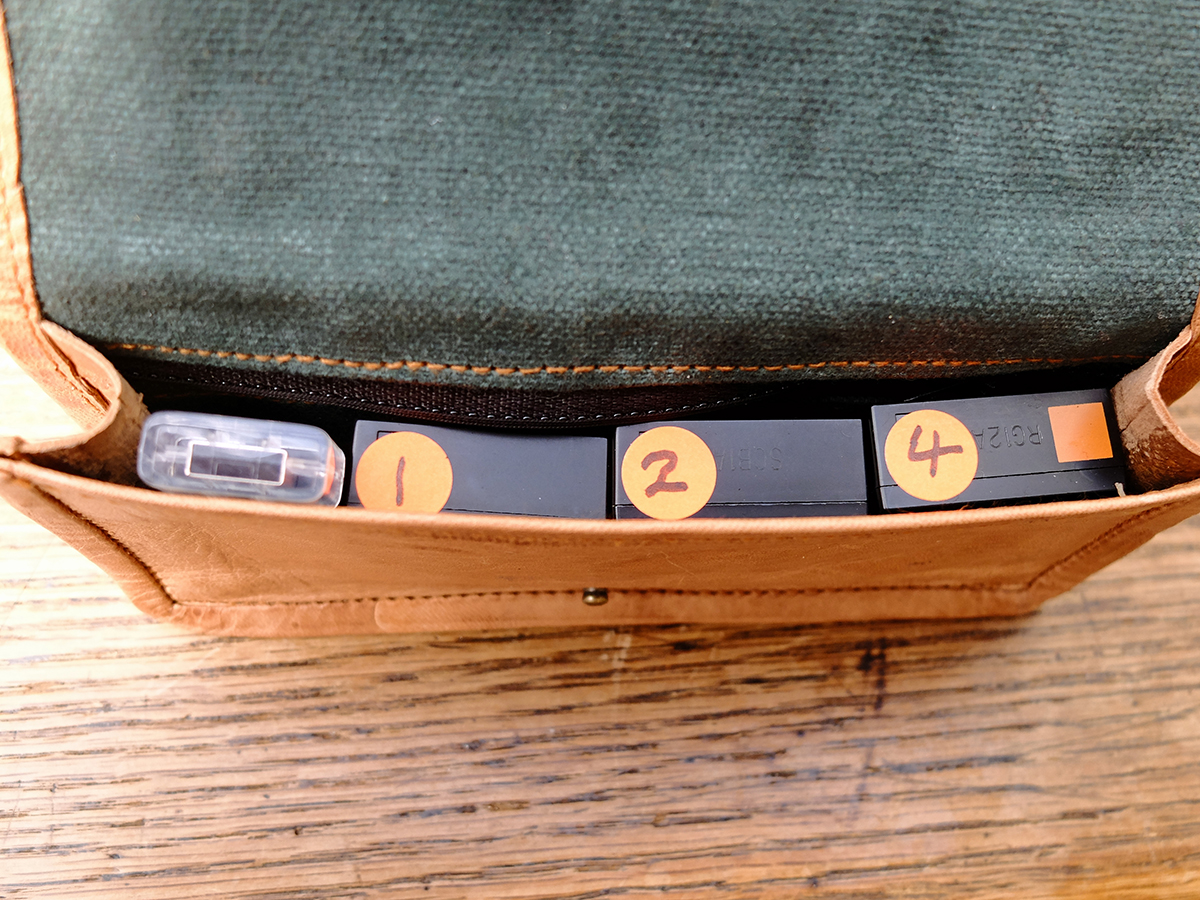 I have solved the issue to an extent by adding the Fuji grip to my X-Pro2 and the Lensmate thumb-rest from my X-Pro1. That latter is a temporary measure since it sits uncomfortably close to the rear thumbwheel. I know Lensmate are hard at work on a new version to overcome this and I will test it shortly. Combined, the grip and rest make hand-holding such a heavy combination a more viable proposition. Vertical shooting? It’s not the end of the world to adopt the time-worn “ape hanger” position.

Power is a bit more of an issue, I confess. We all know by now that the X-Pro2 is a bit more greedy than its siblings. My current (geddit?) solution is three spare batteries, suitably numbered, in a handy pouch. The day at Peper Harow accounted for one-and-a-half of them.

The day itself was breezy and clear, with good light. I went to shutter priority, 3fps bursts and hand-held the rig, with the irritatingly pointless tripod mount removed and left at home. 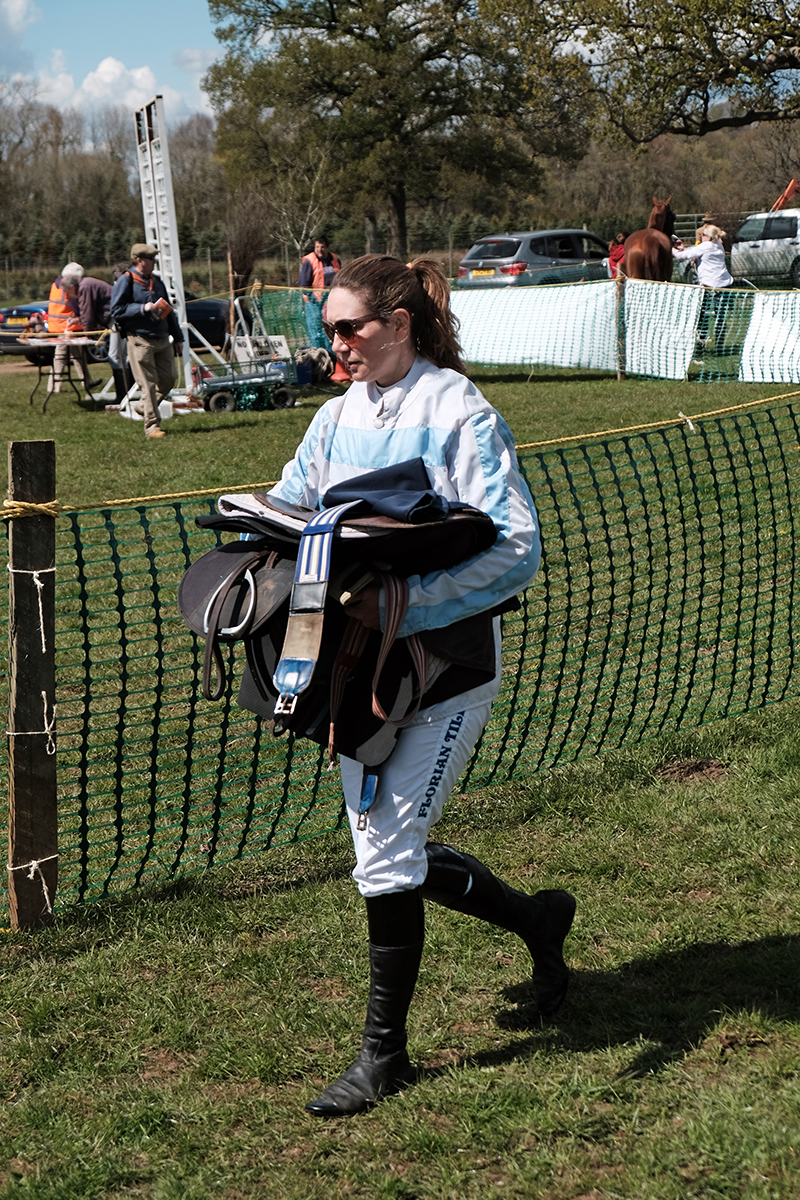 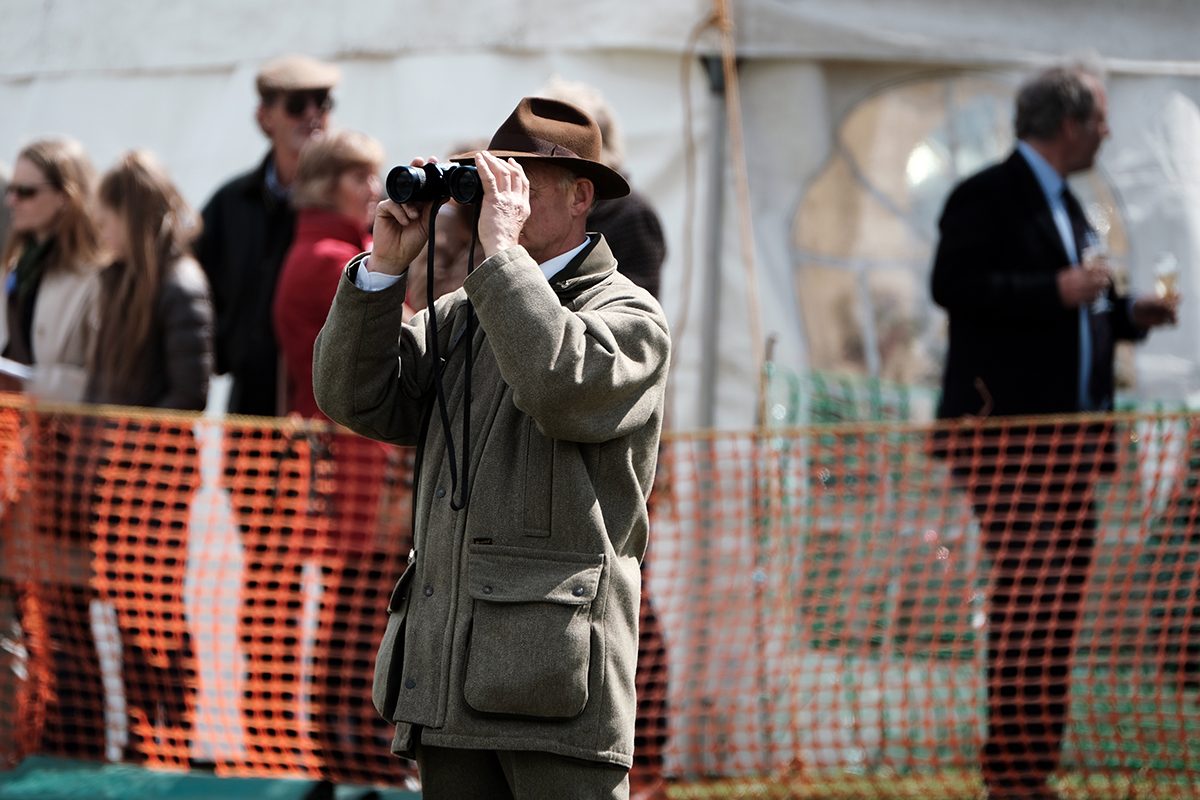 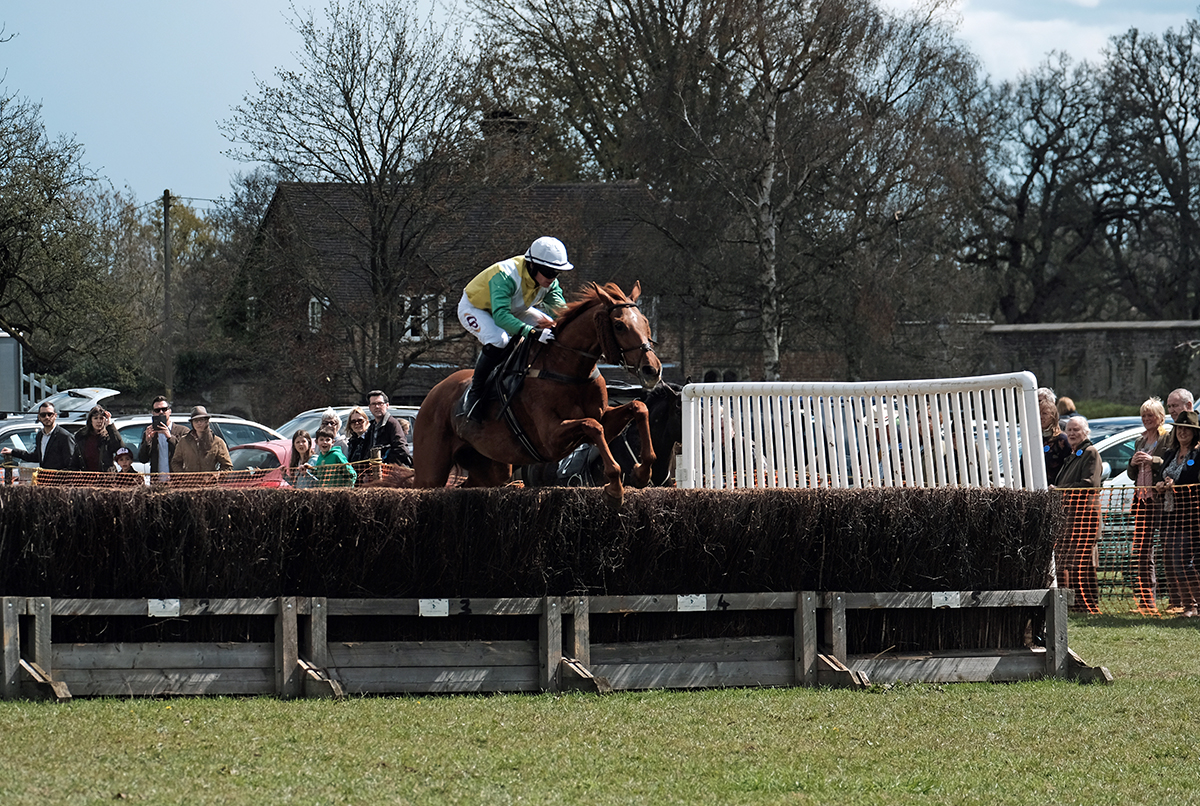 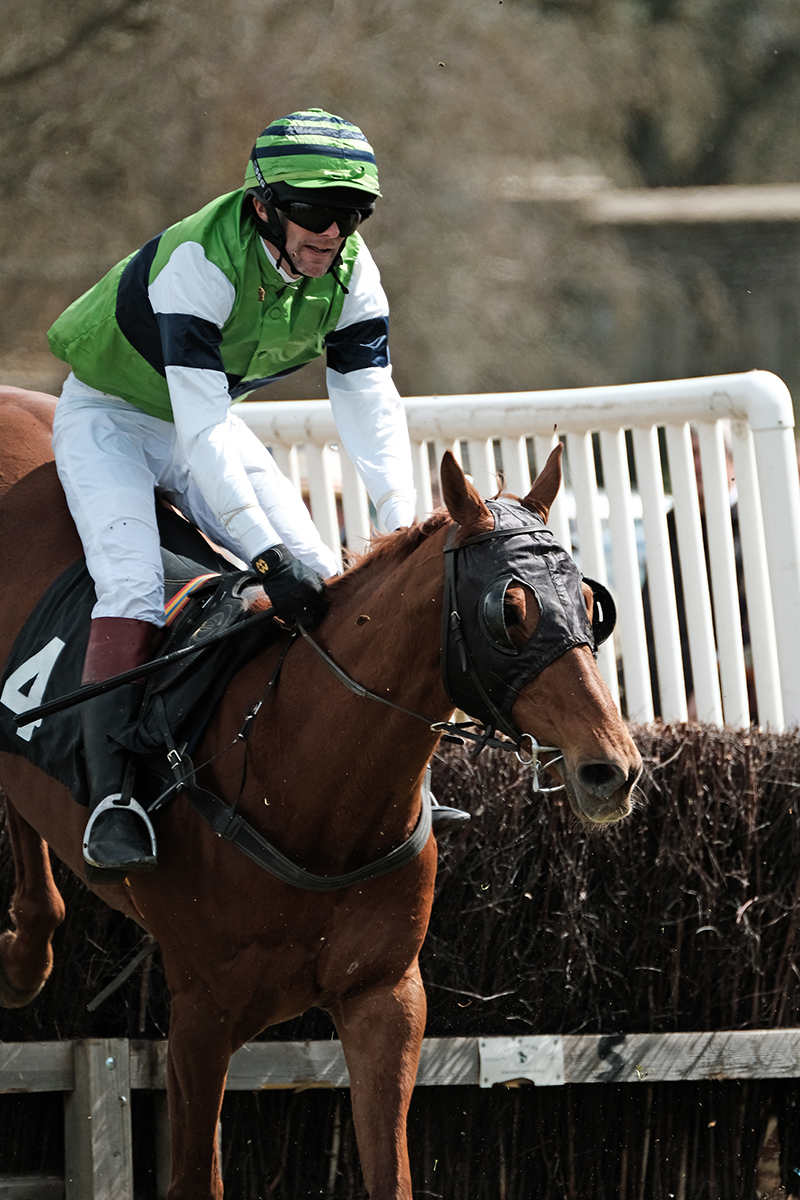 Lessons learned. Well, for starters, I should have had an each-way bet—my horse came in second. As far as the camera and lens combination is concerned, it performed well, as the images attest. However, when I do it again I shall fit a wider neck-strap. My customary braided one was not quite up to the job of comfortably spreading nigh on two kilos of kit. The other lesson was that, yet again, “ye cannae fight the laws of physics”—that lens is a big lump to swing around to follow fast-moving, close-up action. And you can forget about zooming in the thick of things too—it takes too long. I had about twice as many misses as hits, or to put it another way I have a fine collection of horses disappearing rapidly out of right frame.

But—and it’s a big fat significant but— for many of us, the combination of X-Pro2 with it’s luscious 24mp sensor and rangefinder handling and the intimidatingly large 100-400 (one spectator asked if I was shooting the moon…) is entirely viable for those who, like me, occasionally want to shoot the action without going back down the SLR route. In fact, I’d go as far as to say that prior to the advent of the X-T2 it’s the Fuji action photographer’s choice du jour.