São Gabriel da Cachoeira is a municipality in the interior of the state of Amazonas, bordering Venezuela and Colombia. Looking at the map of Brazil, the region has the shape of a dog’s head. The city has about 45 thousand inhabitants, of which more than 75% are of indigenous predominance. Far from the capital – Manaus, at 852 km. To get to the municipality there are two options: via the Rio Negro, whose trip lasts in average 30 hours going up river, or by plane where the trip lasts in average 2 hours.

The boat / express boat trip is very tiring and uncomfortable. The boat armchair doesn’t tilt so it stays in 90 degree position for almost 30 hours. It is possible to walk along the boat from time to time to stretch your body and enjoy the beautiful scenery, perhaps this is a rewarding factor of the trip.

As for equipment I chose to take the Fujifilm X-Pro2 and X-T1, with the following lenses: Fujinon XF 55-200mm, XF 10-24mm, XF 35mm f/2 WR and XF 56mm f/1.2 and 4 batteries reserves, although the consumption has been even lower than expected. I walked about 7 km a day, so the camera with the lenses did not weigh so much, which made it much easier on a daily basis. About 90% of the photos were taken with the Fujinon XF 55-200mm lens. One of my favorites to do street and nature photos, since it has a very fast and precise auto focus and is perfect for making portraits as well. This lens helped me getting some candid portraits, which wouldn’t be possible if photographing closer.

I have 3 Fuji cameras: X-Pro2, X-E2 and X-T1, but my main camera is undoubtedly the X-Pro 2. Every trip I make I will always have a backup camera. The X-Pro2 is perfect for my style (street and documentary). I usually use backpack with rain cover (here it rains almost every days) and I try to protect the lenses to the maximum. Not all lenses I have are weather sealed so, some extra care should be taken with them. After all it rains almost every days in the Amazon and the humidity index of the air reaches 90% for most of the year.

The main advantage of my Fuji cameras is their small size and lightweight, which makes people feel more comfortable on the streets, or at least they intimidate less. The more vintage aspect seduces people on the streets and makes them think it’s a film camera. After I migrated from Nikon to Fuji, the amount of photos was greatly reduced due to the keepers rate, that is, when I take a photograph, I am sure that it was good to the point of not having to take 2 or 3 of the same scene just to guarantee that I captured it.

Since 2016 I’ve just been capturing in JPG format and most of the time I edit them in my smartphone and upload to social networks. When it comes to photographs for exhibitions or contests I edit the Jpegs in Lightroom and the results please me a lot, especially when I want to keep the Acros film simulation or the Classic Chrome (the ones i prefer for my taste).

The city was the first in Brazil to recognize 3 other official languages ​​besides Portuguese, being: Nheengatu, Tucano and Baniua. In the municipality there are about 20 ethnic groups of the indigenous people, being the Brazilian municipality with greater concentration of natives of the country.

The region is located in the National Park of Neblina, the highest point of Brazil. Great mountains where the Rio Negro is born, one of the tributaries of the Amazon River. The beautiful landscapes contrast with the reality of the riverside where the indigenous people live. According to surveys, about 67.5% of indigenous people suffer mental disorders and 15% even commit suicide (Jornal A Critica 07/11/2017). The rate of alcoholism is very high among the Indians.

Because it is a region of frontier, there is a large presence of the Brazilian military (Army), but the minimum assistance that could be given to the natives is almost null. There seems to be two cities, one abandoned – for the native population, and another full of stewardship and perks for the military. As if there was a vacation colony in the middle of the forest for the military while the population lacks basic health, education and sanitation.

The city is bathed by the Rio Negro, one of the largest rivers in the world, but lacks piped water for most residences. People are forced to move long distances to reach potable water distribution points with buckets, to meet their basic needs.

The predominant economic activity is fishing. A region that could have a strong investment in eco tourism is not worthy, after all, it’s one of the most exuberant regions of the Amazon where the Pico da Neblina and other rocky and mountainous formations, as well as internationally famous indigenous villages like the Yanomamis. To get to the peak of the mist is necessary to have authorization of some what hinders tourism in the region. Usually the expeditions are guided by the army.

In the Amazon the seasons are divided into: rainy season and torrential rains. In the same proportion as the full and ebullient period of the Negro and Solimões rivers, both tributaries of the Amazon River, the largest freshwater river on the planet.

Although the name of the city is São Gabriel da Cachoeira there is no waterfall in the city, only a fairly strong volume of water that forms strong currents. In a nearby municipality called Barcelos there is the largest waterfall in America. 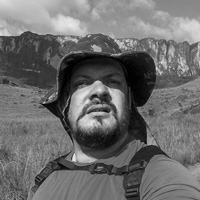 37 years old, father, Civil Engineer and photographer. Lives in Manaus (Amazonas) since 1992. Dedicated to street photography, documentary, portraits based on the Amazon themes. Lately, he has dedicated himself to three photographic projects: 1- Nativos – About the indigenous communities of the Amazon; 2- Retratos do Beiradão – daily portraits in the Port Zone of Manaus; 3- A Outra margem – Reality and social contrasts of the municipality of Cacau Pirera, metropolitan region of Manaus.

37 years old, father, Civil Engineer and photographer. Lives in Manaus (Amazonas) since 1992. Dedicated to street photography, documentary, portraits based on the Amazon themes. Lately, he has dedicated himself to three photographic projects: 1- Nativos - About the indigenous communities of the Amazon; 2- Retratos do Beiradão - daily portraits in the Port Zone of Manaus; 3- A Outra margem - Reality and social contrasts of the municipality of Cacau Pirera, metropolitan region of Manaus.

Posted on June 25, 2020June 25, 2020by Stefan Panaitescu
When I switched from Sony to Fuji, I had no idea how much photography would actually grow on me. Of course, I wanted to get better and take nicer shots, but since that first tr…
END_OF_DOCUMENT_TOKEN_TO_BE_REPLACED
Categories INSPIRATION

Posted on June 22, 2020June 22, 2020by Jeremy Roschelle
On March 10, 2020, our San Francisco Bay Area office closed. Suddenly, we were all working from home. On the 13th, I noticed the lovely tulips in the front of my house and took a …
END_OF_DOCUMENT_TOKEN_TO_BE_REPLACED
Categories INSPIRATION

Posted on June 18, 2020June 18, 2020by Marcelo de Coghlan
Photos of motorcycles and their owners are undoubtedly my favourite thing to shoot. Oftentimes, having someone show their essence and their relationship with their vehicle takes t…
END_OF_DOCUMENT_TOKEN_TO_BE_REPLACED
Categories INSPIRATION

Posted on June 15, 2020June 15, 2020by Jonathan White
Me, Myself and IMy first love and introduction to photography started at a young age where my dad used Minolta film cameras for all our holidays where he enjoyed street scenes, es…
END_OF_DOCUMENT_TOKEN_TO_BE_REPLACED