Antelope Canyon – The Magic Vs The Reality

I would like to share my recent experience I had where I finally visited the magical and infamous Antelope Canyon, a location I have been eyeing ever since seeing the canyon in books over ten years ago.

If you intend on going to see Antelope Canyon like I did there are a few things you need to be aware of. One, you will need to book a guided tour from tour companies run by the Navajo Native Americans. Two, there are two types of tours, the standard cheaper tour where there are no tripods, bags or pretty much anything allowed or the Photography tour, which is a smaller group of around 8 to 12 people, where tripods, camera bags and pretty much anything you can carry on you are allowed, oh be aware the photography tour is double the price. Sadly the fact is, if you want to get ‘the shot’ or pretty much any shot without people in them then you will need to do the photography tour.

Booking is essential and you will need to book at least a week in advance and if you are going in peak season which is the summer months where the light is optimal for those magical light beams you will need to book months in advance. I went at the end of September which is the start of the off peak season, which means less people but as you will see in this post that still is a lot of people. I would hate to see how busy it is during peak season.

Considering this is a Fuji blog let’s first talk about the gear. When on the back of the trailer into the canyon I eyed my fellow photographers, a bunch of lovely photographers of all ages with different equipment and experience levels. There was the cool calm and collected older couple, the Sony shooters. There was the confident Canon guy who was holding his tripod and camera with his foot!

When he looked at me, he could see I was mortified by the rough use, but he said to me “my Canon can go through anything and never lets me down”, he puzzingly had the 70-200 telephoto on his 5D Mark 3. There were other Canon and Sony shooters and then last of all there was me, the Fuji guy!

The body I shot with was the X-Pro2 (X-T3 has been purchased recently which will be my new main landscape shooter but more about that another time). My lens of choice for this experience was the 10-24mm F4 which was the only choice as the 8-16mm had not been released.

I didn’t even bother considering any other lenses, I was however very worried about the non WR and all the dust, so I put a rain cover over the lens which didn’t last long on the camera as it got in the way from the stress and quick shooting experience.

Glad to say though the 10-24 continues to be the workhorse no matter if its rain, dust or wind. My tripod is the Really Right Stuff travel tripod and ball head, they are super expensive but for me, the best. You don’t need to upgrade tripods very often if at all, so I went all out.

To get into the canyon there is a short and bumpy road on the back of a trailer then it’s time for business where the guide will warn you to be ready. You won’t have much time so make sure you know your tripod and camera settings as it’s going to be a stressful experience. When you get off the trailer you will see this giant crack in the landscape and it is impressive. I started to get nervous as I really wanted to make sure I got two or three great shots and make the most of the opportunity in front of me.

The group entered the canyon and it was quite calm, I could hear lots of people but us photographers were in awe. We got our tripods out and shot the first composition. It was a little tight but manageable with a bit of teamwork it went well, I thought to myself ‘this isn’t so bad, first great shot done and dusted, this is going to be easy….. I thought. 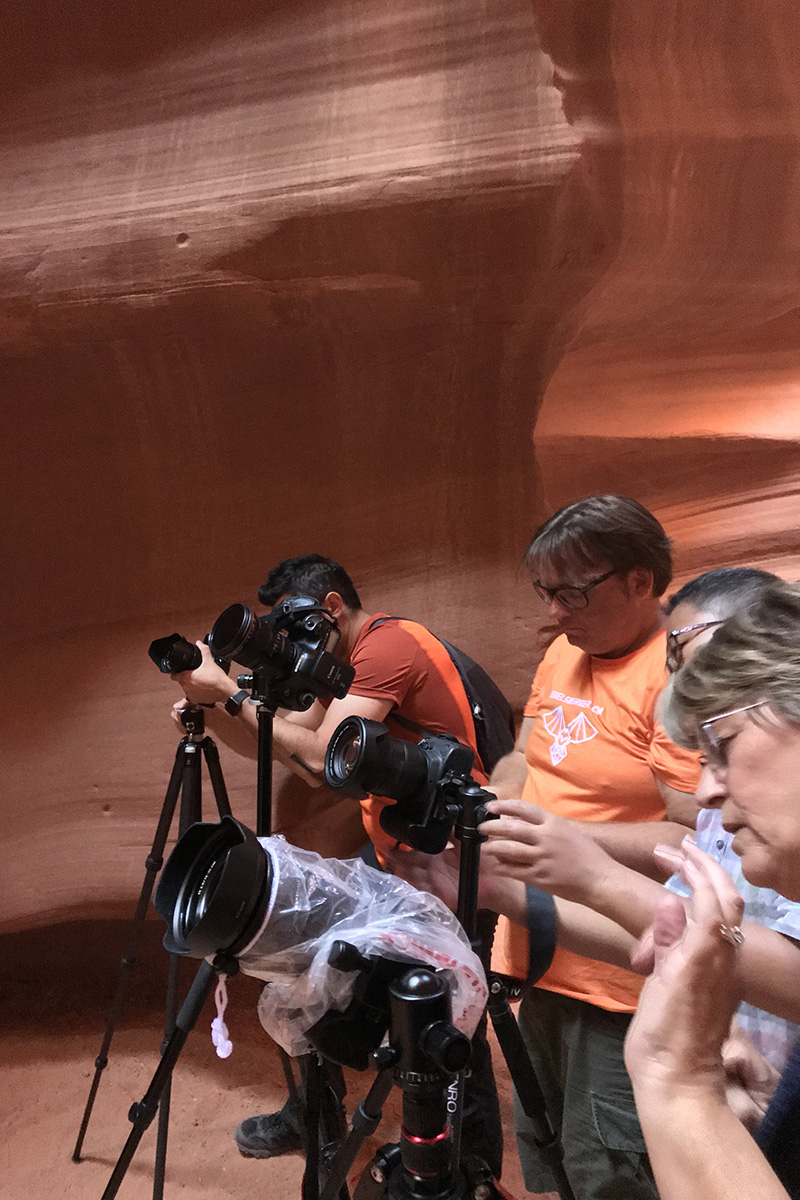 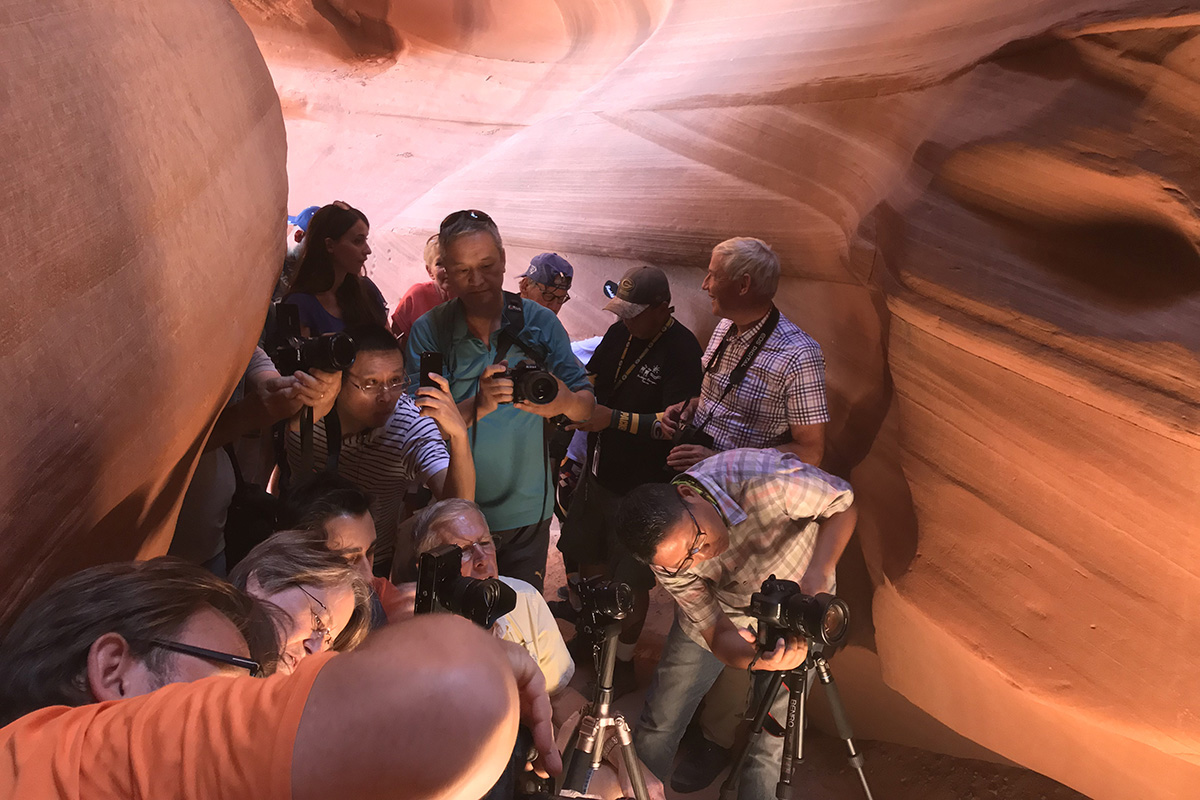 Once we all got our shot it was off to the next ‘photo spot’ in the canyon. This is where the experience turned for the worse and I started to figure things out. As we are being instructed which shots to take, it really is chaos as we were being rushed and pretty much the guide telling us where to point the camera. The guide would say “quick we don’t have much time, get your shot we gotta keep moving!”

On several occasions the guide would get frustrated as we were not following instructions and we were quote stressed to try and get a composition or form our own unique shot with people everywhere. I remember doing ok but some others started to fumble with tripods or camera settings, where the guide even grabbed one of the attendees cameras and took over as they were overwhelmed for one of the shots.

I had no issues thankfully due to X-Pro2’s tactile dials which really help in a situation like this. It was very easy to move the exposure triangle although I must say this was the first time in a long while where the ISO dial on the X-Pro2 started to annoy me. I only made one mistake leaving the ISO a little high for a few shots until I realised.

When shooting the canyon my general approach for settings was 2 second timer, 5 brackets (⅓ stop intervals although I would change this to 1 stop and 3 brackets) F8 or F7.1. ISO 800 and auto white balance as I knew I would be shooting in RAW and adjusting it in post.

This worked most of the time although I had a few issues with the 4th or 5th bracket which would take too long and because we were being rushed it was touch and go to get through all the bracket frames, so sometimes I would have to abort the last one or two bracketed shots.

When walking through the canyon you will be taken through the middle part of the canyon which is super narrow and it was horrendous, no real room for shots, just chaos and bumping into people. After the middle section, our guide said we would have a chance for a potential light beam, so we raced through the canyon to catch one and I was very lucky to see the only light beams for that day. They disappear quick so you must get into position.

On my second attempt I got the shot before it was too late, the light beam only lasted probably 3 minutes and it really was amazing and magical to see that in person even in the current situation with all the people everywhere. I remember others in the group missed out as they were fumbling around, so you must be quick and well prepared. After this we had a few more scripted shots and then we got the hell out of there, once out of the canyon everyone was relieved including myself as the experience had taken its toll.

I was honestly glad to get out of there, unfortunately this magical place isn’t so magical because of the experience. The canyon is photogenic, you can get such great shots but it is ruined by the scripted movement from the guides and the sheer amount of people. I would never go there again however if you asked me should you do it? Well that’s a tough one, I kind of knew it was going to be not the best experience but I really wanted to see it, so I still went through with it. I think for the amateur photographer like me it was ok to get some shots but I feel if I was a bit more of a pro and had a big portfolio of work the maybe I would give this a miss purely down to the experience and because it has been shot so many times and there is little room for creativity.

My suggestion would be for the owners to charge more and decrease the amount of people so they can make the same amount of money but improve the experience. I can only imagine if this canyon had not so many people it would be absolutely amazing. They do lottery systems elsewhere to preserve some of the sights in Arizona, so that could be an option but I don’t know how all that works as this is native land.

BUT WAIT THERE IS AN ALTERNATIVE…

I decided the next day to go to another canyon, the canyon they call Horseshoe Canyon. This canyon was in all honesty not as photogenic or as amazing as Antelope Canyon but the experience was much better. I had the canyon to myself for about 20 minutes so I could walk up and down, enjoying the beauty of this canyon. I have also heard there is another canyon called Antelope X Canyon and others, so I would encourage you to possibly look into those or prepare yourself for the chaos of the Antelope.

Amateur travel photographer, Fujifilm fan and passionate product manager based in Melbourne, Australia. Photography is my creative outlet that drives me to continue to see the world and journal the experiences.