On holiday with the the Fuji X10

There is now a folder of scans of old photographs, some of them very beautiful. They go back to the time of my birth and run through my late teens. All the early ones are by my father, a civil engineer, now retired. Then there are some weird ones from the time I was 16 or so, and I think that’s when I picked up my first camera — an Agfa ‘Click 3’, as I recall. There was other equipment around, and I soon began experimenting with that: a twin-lens Rolleiflex, a Pentax K1000 SLR, a large format Mamiya.

There was, I think, an old Leica, but I don’t remember using it. There was a strange Russian model that swept a vertical slit over the lens sideways to produce faux panos. In college, in my late teens, I started a small darkroom with a Durst enlarger, and loved the shimmer of prints in the trays, the red light in the room, the mixing and shaking. It was all black and white stuff, of course.

But the fixation was beyond the taking-and-making of images. I devoured books on photography, everything from self-teaching to books by masters. Then I got my first Nikon, an FG-20. Came the digital age, and I was in right away, with a Nikon DX90, then a DX100, a DX200 and finally a DX7000. By then, I’d added several lenses, two or three zooms and some primes.

Until 2013, I was in independent practice as a litigation lawyer, but managed to find time to follow my interest in photography. In June 2013, with an appointment to a different position, though still in law, I was forced to reduce the time for photography — less time for the actual photography, and a greatly tightened or stripped-down post-processing workflow. By now, in my late 40s, the Nikon was just *The Beast*, an extraordinarly heavy thing to lug around.

I bought the Fuji X10 as a standby carry-around, mostly in situations where The Beast was too obtrusive, too intrusive, or just too darn heavy. I needed something that I could put in a pocket, whip out, but had a reasonable tele-zoom, shot RAW and had viewfinder.

The X10 seemed to fit the bill. It served me well over many years, and only gradually began to deteriorate — the sound went, beginning with the shutter sound, and then all sound, and no firmware upgrades could fix it. But it kept going, taking photographs, and while it didn’t have the present ACROS modes, its in-camera BW conversion was very good.

On a holiday in and around Geneva and then through Barcelona, Granada, Seville and Ubeda, I abandoned The Beast altogether. I think I got reasonable results, both in colour and black and white. They required the most minimal adjustments — some exposure tweaking, minor sharpening, not much else.

There’s been no light painting. Most of all, I loved the fact that I was, quite literally, *unburdened*. I was free to walk, to pause, to see, and whip out the small X10, twist the barrel to start it, and shoot.

Some of the street shots I got were literally because of this: no messing around, no complex controls, just the camera as an extension of the hand and the eye. Frankly, I think _this_ is the model they should have worked on and continued. A good quality compact lens with just enough zoom to be useful in most situations, intuitive controls, quick and easy to use.

I’ve never used the X20, and I’m told it’s even finer, with a much improved sensor. The new series with the fixed 28mm lenses seem to me to needlessly impose the equipment on the photography, forcing a different visual sensibility. Sometimes you do need to get in just a little closer.

Perhaps Nikon and Canon and the others should understand this: with cellphone cameras getting better and better, and increasing restrictions on air travel, weight is becoming a determinant. There’s a whole generation now out there that _doesn’t_ use cameras at all, and prides itself on the quality of its cellphone photography.

The Big Boys are in danger of rapidly becoming indulgences, and lightweight cameras that deliver — like Fuji — are probably the future. Consider this: _both_ the XT20 and XT100 with lenses mounted together are lighter in the hand than a Nikon D7000 with an 18-300 everyday use zoom.

I’ve recently switched over: got the XT20 and now the new XT100, with a complement of lenses. I ran a series of test shots with all three: The Beast v the other two, and Fuji just returned incredible results in varied light conditions.

I believe the low-light comparisons are misleading: one doesn’t invariably shoot then. You have to see how they work _on the average_, and the Fuji cameras returned top-end results. I have little need for The Beast now; but I will await Nikon’s long-promised mirrorless.

The dinky Fuji X10 (or, if you have it, the X20) is a perfect little travel camera. It has no disadvantages I can think of, except the technology has now outpaced it. It doesn’t perform terribly well at high ISOs, and the exposure compensation dial on the top right can be a nuisance because it rotates when the camera is pulled from a pocket that’s too tight. 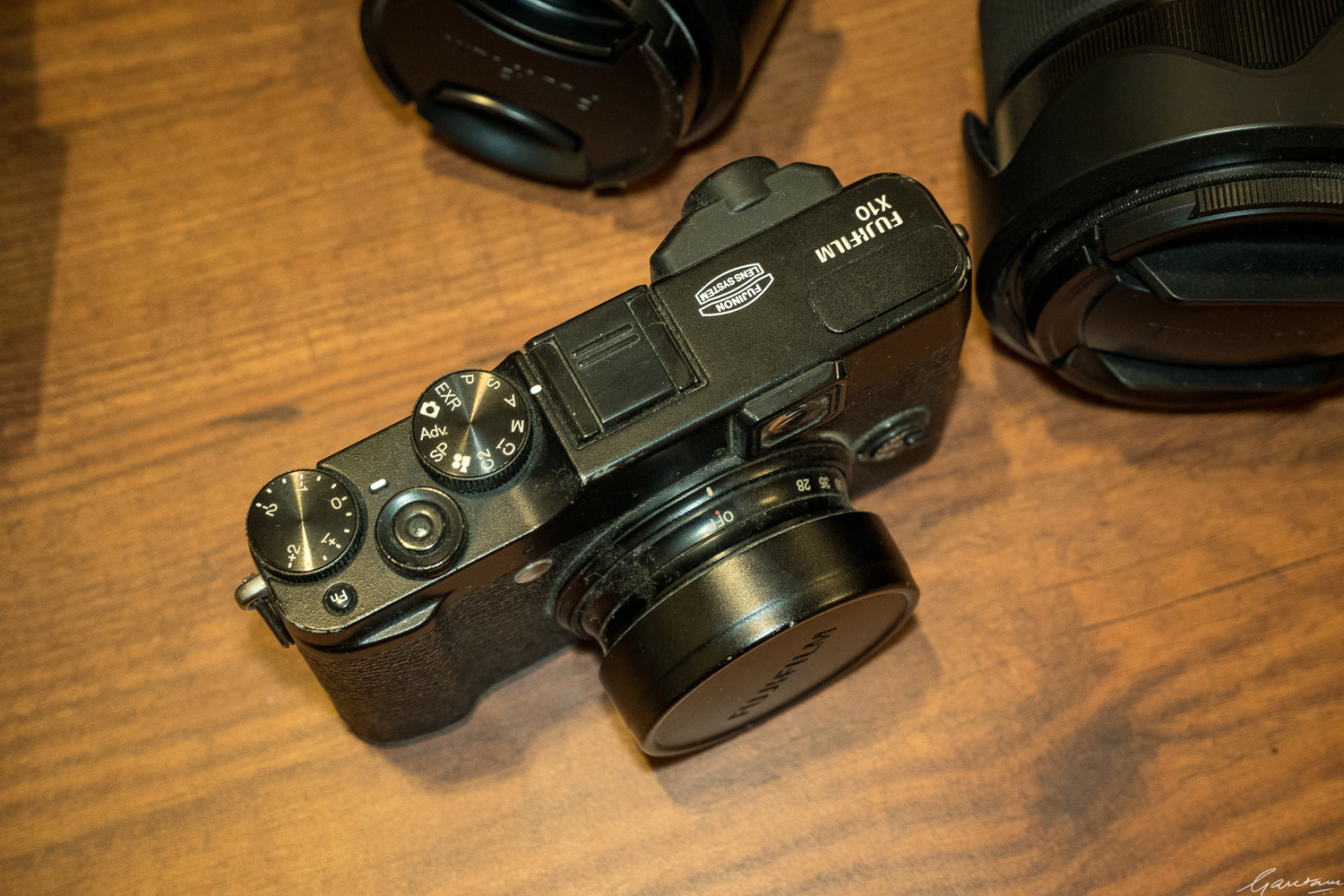 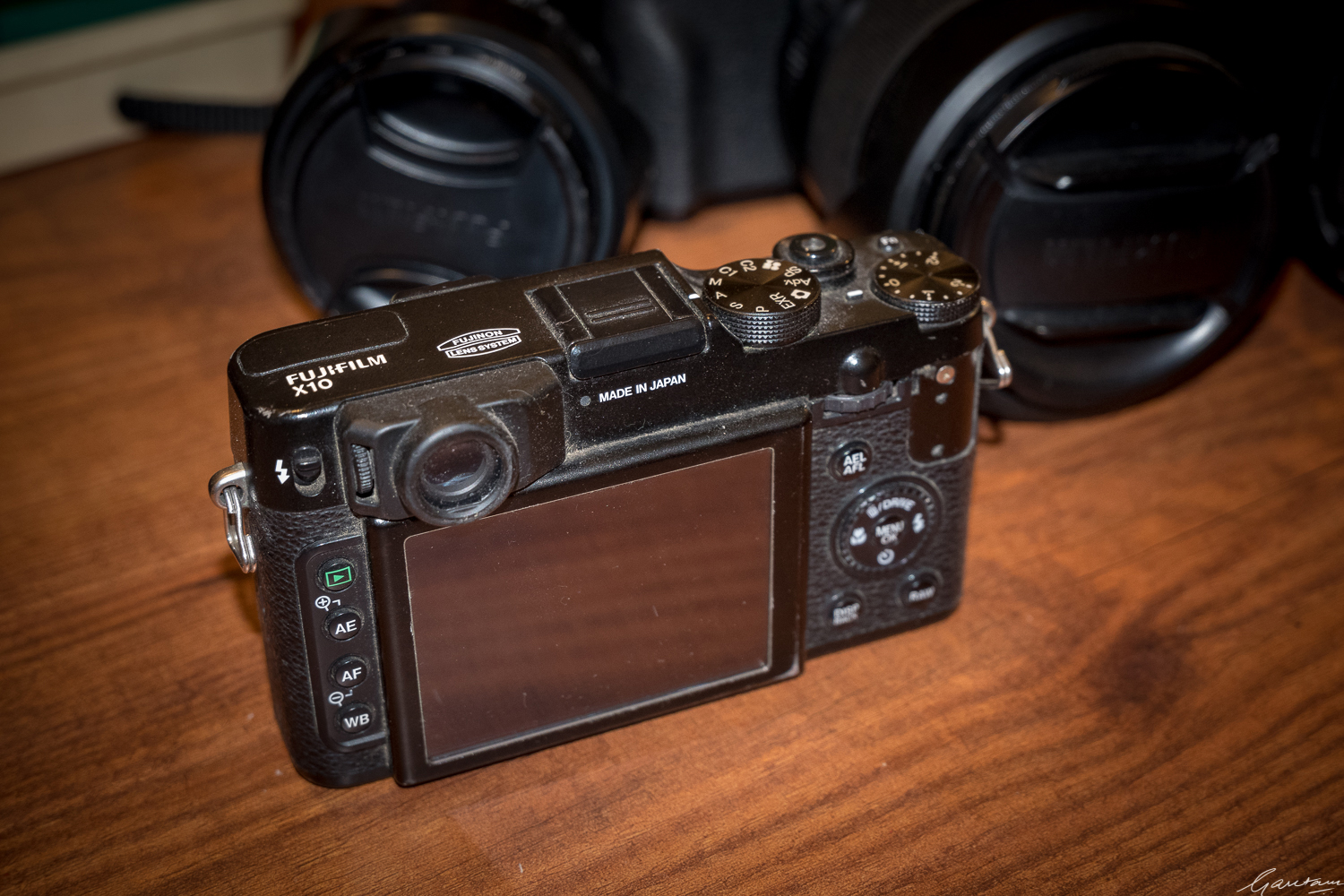 I like the fact that it has so many modes — I usually shoot aperture or shutter priority — though I don’t use the built-in special modes at all. Like most of the Fujis it’s infernally slow in rendering RAW (the Nikon is crazy good here); but the top advantages for me are the ability to shift between the rear screen and the viewfinder, the lightness and the fact that it’s so inconspicuous.

It’s suited to my workflow, too. I use LR almost exclusively with the odd foray into Photoshop or OnOne Raw or Luminar. I no longer convert to DNG, but work directly with the RAW files. Typically, I scan through the lot and flag the ones I want to work on, deleting the obvious rejects, and moving the rest to another folder. My marker is to retain about 10-20% of the shoot.

In LR’s develop module, there’s a quick look to see if I want it in BW or colour; then the profile adjustment, manual tweaks of exposure, contrast, blacks, highlights, whites, a little sharpening with an unsharpen mask, some dehaze. Straightening etc., is always first. I keep the brushwork to a minimum.

Over time, my ‘seeing’ has changed. Perhaps it’s part of growing older. There’s much less tight telephoto stuff, and more in the frame; overall, the emphasis is on light, structure, rhythm, pattern. I want these to be strong elements in the frame. The end result must be something on which the eye wants to pause. If a viewer has to struggle to find something in the frame, then the photograph is a failure.

I find that it’s a fashion these days to treat as ‘art’ even a really terrible photograph. Writers in newspapers go on and on about how great the image is, when it’s little more than mundane. Some, I think, are overawed by the aura of the photographer, usually dead.

That cannot be a legitimate way to assess a photograph, if you accept that it *is* an art form. It’s like saying a particular book is good not for its writing or insight but because it was written by famous so-and-so. That’s just flat-out wrong. For me, photography is about something else. It’s no longer about preserving a slice of time, or a memory. It’s about freezing a moment scene, a moment of a particular way of seeing.

“I am a Mumbai-based amateur photographer. Even more than taking photographs, I have always enjoyed reading about and studying photography as an art form (still terribly under-rated, in my view). I presently work in a court in Mumbai.”