Do you question the quality of variable zoom lenses? I’ve been able to take the Fuji 18-135mm lens on some fun adventures and have this practical review.

Reviewing Fujifilm’s 18-135mm lens out in the wild
I’ve been meaning to get to a review of Fujifilm’s 18-135mm variable aperture zoom. I’ve taken it on a few adventures with me in the past six months, and after a few days on California’s Lost Coast Trail, I think I’m ready for a verdict.

I was presented with a challenge on the Lost Coast. There are spectacular ocean vistas and diverse wildlife, and plenty of photographic subjects in between. There’s also strong wind blasting fine sand and sea spray that sticks to everything, especially camera sensors. It makes changing a lens a risky endeavor.

Sensor placement is one of the big disadvantages of mirrorless cameras. You need to think about protecting it in environments like this. Avoiding any lens changes leaves no doubt about keeping the sensor clean. Is there just one lens that would work for wide skyscapes and wildlife close-ups?

This review looks at the Fujifilm 18-135mm lens as an all-in-one adventure lens. I’ll just look at it from a more practical outdoor travel perspective – will it work as the only lens you take?

Here’s a few photos from the trip first. Photos have been downsampled for embedding in this blog.

They just always seemed soft and prone to awful fringing. There was that one focal length and aperture combination that was sharp, but everything else just wasn’t good. And they were usually breaking due to the cheap construction to keep the prices down.

I’ve been warming up to them lately. If I had told myself ten years ago that today I’d be a professional photographer shooting a variable aperture zoom lens on an APS-C camera and optimizing my camera’s JPEG output to minimize RAW processing…ha, that’d never happen, but it is! 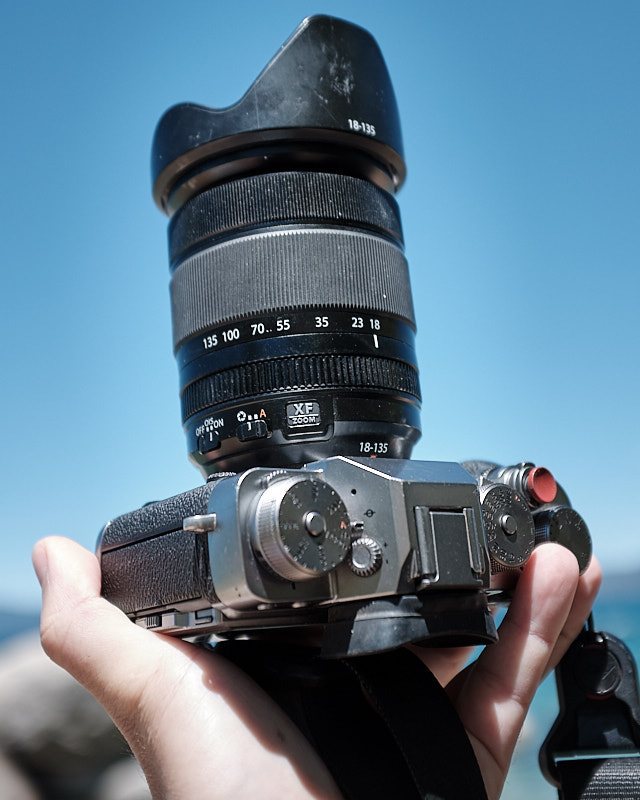 As of this writing in June 2019, the lens retails new for $799. You can check either B&H Photo or Amazon for current deals & prices.

A summary of this Fuji 18-135mm review
If you don’t want to read the rest of this review, here are the highlights:

And now in further detail.

Lens focal length
The 18-135mm focal range gives you an equivalent focal length of 27mm to 206mm when mounted to the APS-C Fuji X cameras.

27mm isn’t really considered “wide” by most photographer’s standards. We usually prefer something wider when photographing epic skyscapes and in tight spaces like tents & campsites. I’d wish for at least 24mm (16mm for APS-C) but we can’t have it all. 27mm is close enough.

The telephoto end at 206mm is an ideal length for your average adventure. Most photographers heading out on backpacking trips don’t carry anything longer than 200mm unless there’s some kind of specialty wildlife purpose.

Fuji 18-135mm lens construction
The Fuji 18-135mm f/3.5-5.6 lens is mostly constructed out of high-quality plastic to keep the weight down. It’s durable and doesn’t feel “cheap” like other plastic lenses.

This particular lens has a ventilation system that Fuji claims blows air out of the joints when you zoom the lens. This keeps dust and water particles from entering when you zoom. I’ve yet to get any fine dust from the Sahara or trails like the Lost Coast inside the lens.

I wouldn’t go as far as to submerge the lens, but it’ll still perform if you’re caught in a downpour.

Optical Image Stabilization
OIS is an invaluable asset to have on this lens for a couple of reasons.

Fujifilm claims that this OIS system gives you five stops of performance. Let’s look at the following image (this one from Morocco) to see if that’s true. This handheld image was taken at 41mm (equivalent to 65mm), f/8, for a 1/2 second. The inverse rule tells us that we can handhold this focal length up to 1/60 second and still get a sharp image most of the time. A half second is five stops slower than 1/60 second. It works! 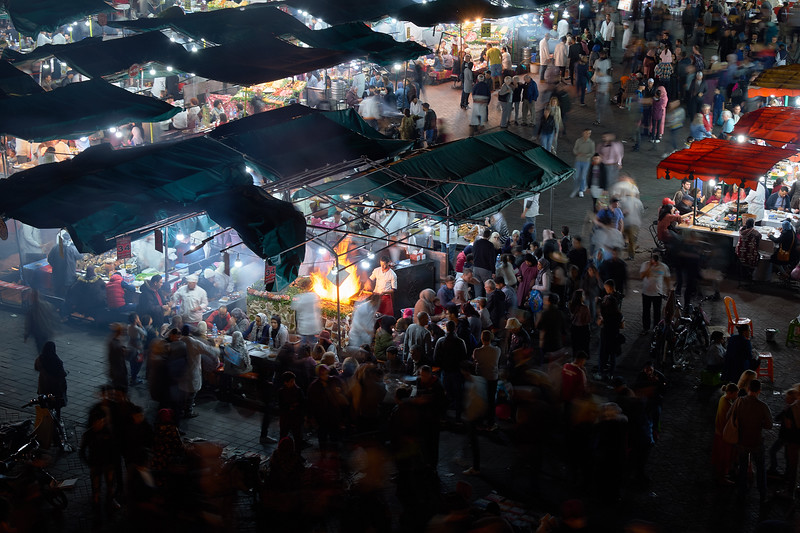 Ergonomics
The Fuji 18-135mm lens has a small aperture control ring on the back of the barrel. This ring electronically controls the aperture. It doesn’t have numbers on it like other Fujifilm lenses, so you’ll have to look at the display to see what’s set. It’s a little loose and I’ve accidentally bumped it a third of a stop now and then.

The focus ring is in front of the zoom ring and is just wide enough to quickly grasp when you need it. It’s an electronic control, meaning it controls the focus motor instead of the glass directly. This is also super smooth for fine control.

The glass
It’s a little chunker of a lens with 16 glass elements – but I think that’s a good compromise between quality and weight.

You’ll see in the specs that this lens includes four aspherical lens elements and two extra-low dispersion elements. In English, this means that the lens contains higher-quality glass design that ensures sharper focus throughout the frame and at all focal lengths. They also reduce that ugly purple fringing that occurs in high-contrast edges.

This lens also contains a coating that increases contrast and reduces flaring when shooting into the sun.

All of this increases both the cost and weight of the lens, but considering what you’re getting in a “kit” lens, it’s a great value.

Disadvantages of the Fuji 18-135mm lens:

Focus
There are lenses out there that focus much faster than this lens. They’re expensive. Maybe I’m just used to those, but this lens isn’t terribly slow. I just think there’s room for improvement. It’s still fast enough for continuous autofocus to keep up with fast-moving approaching subjects.

For what I do, I usually keep the lens in MF and use the AF-L button for quick focus. For backpacking trips I find I like to use the focus peaking assist to confirm the AF-L focus and help with manual focus.

Length
The lens nearly doubles in size when you zoom it. Be mindful of this when using the lens next to objects, like shooting through a window. 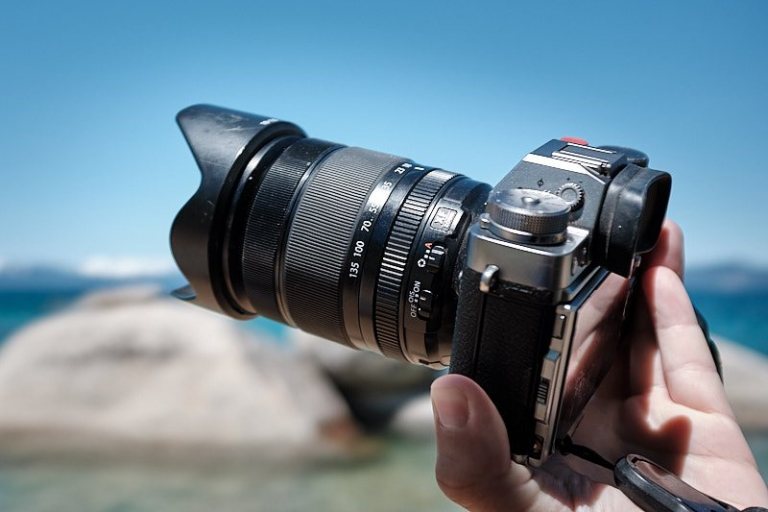 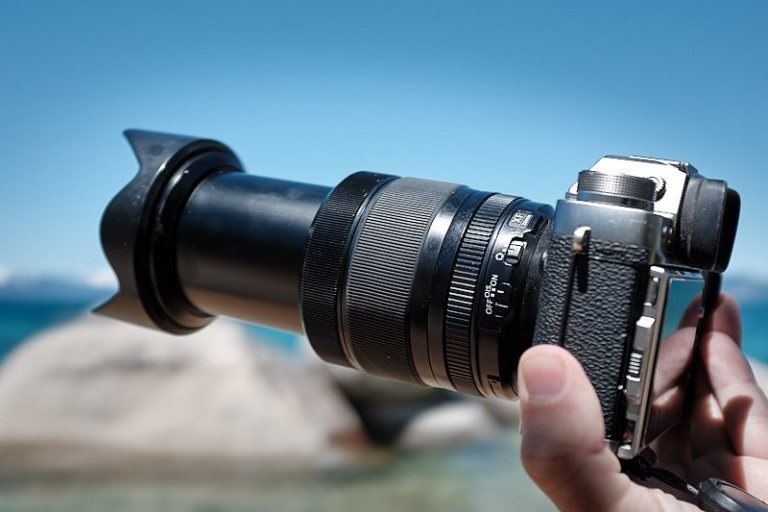 I was initially hesitant about this being the only lens I brought on my last backpacking trip.

But when you consider taking only one one-pound lens worth $799 – as opposed to multiple lenses to cover an equivalent focal range – it’s a great deal. One of the many methods to keep your pack light.

Are there lenses out there that could have done those things better? Of course, but not all in one lens. This one has great sealing, stabilization, and produces sharp images throughout the long-range.

Know its limitations and how to optimize the images and you won’t believe it’s a kit lens.

Tip: I tried to keep it at a maximum of f/8 up to about 90-100mm, then I’d increase it to f/11. This seemed to produce the sharpest images, despite longer shutter speeds (thanks OIS!) and a higher ISO when I needed faster shutter speeds.

“I’m an Air Force combat veteran and pilot by trade. Towards the end of my career, I realized that I needed a different pace in my life, so I bought a 27-foot sailboat and sailed from North Carolina to the Caribbean. It was a life-changing adventure, one that I still continue on a part-time basis.
Somewhere along the way, I started volunteering more of my time to help people and causes I believe in, and it feels great. I’m an accredited associate at Photographers Without Borders, have worked with a handful of environmental conservation groups, and volunteer on two search and rescue teams when I’m home.
I call Lake Tahoe home and enjoy all of the year-round activities offered in this mountain paradise. These include backpacking, hiking, skiing, snowshoeing, sailing, and kayaking.
I realize how powerful photography can be and my goal is to use it as a tool to help people. That could be to motivate them to get outdoors more for the health benefits; to help preserve land for that purpose; or to assist with non-profits and NGOs in their missions to bring a better life to others.
I am a self-sufficient traveler, often embarking on journeys with just a small backpack and a shoulder bag. I embrace learning new cultures, traditions, and languages. My experiences in Air Force survival training, with two alpine search and rescue teams, and as a current wilderness first responder mean I’m ready for any challenge.”