Fuji mirrorless ruined me for other brands and I can’t stay mad.

Before I even held my first Fuji X series camera, an X-T20, I caught feelings. I have boxes of vintage cameras in my closet and I am a sucker for anything that doesn’t try to look modern or space-age, so the aesthetics were highly appealing to me.

I am not one to be won over on looks alone however. I need the full package, and my livelihood depends upon it. Compromises of any significance would be a dealbreaker for me, even with a compact camera like the X-T20. If a camera can’t perform the way I need it to, I will always reach for what I know will, even when it might be inconvenient to do so.

That being said, starting with the mighty little X-T20 and later the X-H1, I walked away from a tried-and-true pro-level Canon full-frame ecosystem in exchange for the Fuji X Series and haven’t missed a beat.

In fact, I am better than ever.

The electronic viewfinder (EVF) was an immediate gamechanger for my work. I can’t speak for everyone, but the exposure simulation makes an optical viewfinder look inferior in my eyes. Besides the obvious and immediate benefit that is a real-time preview of your exposure, the enhancements capable with an EVF are staggering.

I don’t buy the argument that it isn’t as pure of an experience as an optical viewfinder. Despite my adoration for the vintage camera look, as a really, really serious photographer, the ability for my camera to function in the most effective way as a tool for photography is the paramount goal.

After switching my X-T20 into the rotation, my photojournalism and (of course) street were the very first things to benefit from my new and different tool.

Anyone who has carried a full-frame DSLR around can tell you that people notice. The little Fuji camera was far more disarming to people on the street and on assignment. Sensitive stories involving tragedy must be handled with care and respect, and I found time and time again I could build a rapport and begin authentic discussions sooner without a giant camera giving people the psychological “stink-eye.”

All the benefits inherent in a smaller, lighter, more discreet camera package were at my fingertips, and I was never sacrificing image quality or functionality.

Even in difficult lighting scenarios, the X system had my back with great high ISO performance. That fact, combined with a small speedlight meant there was literally no high pressure journalistic situation in which I ever felt like I couldn’t get my shot.

After my initial happiness with the Fuji’s competency, I was blown away when my landscape images were beating out my full-frame gear as well. Even starting out with the “kit lens” (we’ll discuss that understatement later), the colors, the contrast and the look were all clearly superior in my eyes. I was even getting astrophotography results I was ecstatic over.

That is when I started thinking, “maybe it’s just my preference. Perhaps other people wouldn’t feel the same.” I had just about accepted that until I noticed my Fuji prints were selling better than my others.

It was such a pleasant surprise I stopped flying my drones for a long while and had a love affair with ground-based landscape photography reignited.

As I realized I never wanted to go back to a DSLR, I began investing more heavily into the system with better bodies. The Fuji X-H1 was available for a song and it was a worthy upgrade for more serious purposes.

The real nail in the coffin for my conversion to the Church of Fujifilm was the glass. The quickest way to a serious photographer’s heart is with killer glass at a price they can afford. Fujifilm accomplished all these things, with all but their most specialized lenses (such as the awesome XF 200mm f2) well within reach of someone with a full time income.

I was fortunate enough to buy my X-T20 with the well-loved but value-priced XF 18-55mm f2.8-4 OIS. This is a focal range not often associated with quality, but the little powerhouse zoom offers a faster-than-normal f2.8-4 aperture range, combined with great optical image stabilization and image quality on par with an entry-level prime lens. To this day, despite having purchased a wide variety of X series lenses, the 18-55 does 75 percent of my heavy lifting and it does not desire the ire usually reserved for the dreaded “kit lens” in most camera bundles.

The rest of the time I do have a favorite, however. The Fuji XF 35mm f/1.4 is the full-frame equivalent of one of my beloved full-frame lenses, the Sigma 50 1.4. If you hold both lenses in your hand it feels almost like comparing a golf ball to a softball. The tiny and light Fuji lens manages to outperform the Sigma for me, something I thought it could never do.

Perhaps most surprising to me, the Fuji’s became my go-to wedding and portrait cameras. With amazing lenses like the aforementioned XF 35mm f/1.4, I was happier with the images I was making for my clients and they were happy too. With the availability of excellent off-camera flash systems for Fuji, such as the popular and affordable Godox lineup of speedlights and strobes, I had nothing left with which to justify remaining in the full-frame camp.

Even when shooting for a statewide portrait competition, Fuji didn’t let me down. At first, I thought, “this is a competition, maybe I should get out the full-frame”, but something in my gut told me no. My initial worries faded quickly, especially once I was contacted to inform me of my first place win.

Since I began shooting Fuji I have booked clients at a higher rate than usual, and began winning awards more frequently. I would be a fool not to attribute that to my own personal growth, and I do, but I am not ashamed to admit that I think Fujifilm helped me grow as a photographer. 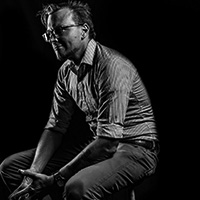 Robert Stevens is a multi-award winning photographer and journalist who saw the light and jumped ship from Canon full-frame gear when he realized the Fuji X series was a better tool for his needs. Stevens runs Beehive Imagery Studios, a photography business in Manti City, Utah. In addition to his love of the camera, he also runs a decorated 125 year-old rural weekly newspaper, the Sanpete Messenger, and stays busy between work and his wife and daughter.

Robert Stevens is a multi-award winning photographer and journalist who saw the light and jumped ship from Canon full-frame gear when he realized the Fuji X series was a better tool for his needs. Stevens runs Beehive Imagery Studios, a photography business in Manti City, Utah. In addition to his love of the camera, he also runs a decorated 125 year-old rural weekly newspaper, the Sanpete Messenger, and stays busy between work and his wife and daughter.

Posted on January 5, 2021January 5, 2021by Ben Wagner
On Thursday March 12th I got the call from my local camera shop: my new, black, Fujifilm X100V — which I had pre-ordered months ago — was finally here. The night before, the Utah …
END_OF_DOCUMENT_TOKEN_TO_BE_REPLACED
Categories INSPIRATION

Posted on December 4, 2020December 4, 2020by Earl Goodson
Last May, I ended up putting my X-T2 and interchangeable lens collection up for sale on eBay. Not because I was dissatisfied with them but because I was considering something dari…
END_OF_DOCUMENT_TOKEN_TO_BE_REPLACED
Categories INSPIRATION

Posted on January 1, 2021December 29, 2020by Lin Qi
My name is Lin Qi, and I am from China. I live in New York. I am a photographer, but I also do other jobs to fund my photo projects. I love photography more than anything else.…
END_OF_DOCUMENT_TOKEN_TO_BE_REPLACED
Categories INSPIRATION

Finding the value of X

Posted on October 27, 2020October 26, 2020by Fabian Reinke
We all have a story. Mine begins in 1989. Since then my perspective has been influenced by the many places and people I’ve come across. With photography as a medium, I hope to sha…
END_OF_DOCUMENT_TOKEN_TO_BE_REPLACED