I started photography in Greece where I was born and raised and immediately I knew I would be a landscape photographer. Don’t ask me how I knew it, it could be my love for nature or my antisocial behavior could be both I just did. Back in 2005 when digital was creeping in the photography world I made my first leaps in photography documenting the beauties of Greece, a country photographically unexplored until then, at least within the context of contemporary landscape.

I was and partly kind of still am a Nikon guy and my first digital camera was a Nikon D70s but soon I realized its limitations, moved to a D200 and after it met a tragic death falling off the rocks of Meteora I moved to a D3s to end up with the megapixel monster the D810. By then my camera bag, adding the lenses the tripod my filters, batteries and all that comes along, would weigh more than eight kilograms and I was getting tired of it.

Fuji came into my life the summer of 2014 in the form of an X-T1 which I had kept until recently and the timing couldn’t have been better. By that time in my life and after the boom of Facebook and Instagram landscape photography as I knew it and started was dead inside me. It just wasn’t fulfilling anymore. I have put places of Greece on the landscape map and they had been copied a thousand times with each variation trying to be “original” by searching for even more extraordinary conditions and when that wasn’t enough Photoshop came to the rescue.

I just didn’t want to be a part of this niche anymore with the same mentality dominating photographers’ minds all around the world. By then I have left the capital Athens where I have lived for thirty three years and relocated in a small village of ten people up in a mountain called Tymfi in north western Greece near the border with Albania. I told you I was antisocial.  I was already in my third year of photographic inactivity because I just couldn’t find a way to express myself. I didn’t know how.

All I knew was hope for great light and epic weather get my tripod set my camera find a foreground, find leading lines, match the foreground with the background, take the shot edit, repeat. I desperately wanted something different and I desperately wanted to photograph because photography is everything to me. It is my catharsis, my visual prayer and confession.

At first I dug deep into me in search of me, then I went back into my archives and found all those images that started to mean something to me, that had a connection and felt to be more than just random collection of pretty images. Those were images that I had overlooked as non-important back in the days where likes and appraisal were higher priorities than the inner connection I was slowly discovering between myself and my photographs.  And I started photographing again.

If this was a Greek tragedy the X-T1 would be the “Deus ex Machina” that always comes in the darkest hour to save the day. In order to be myself I needed to be mobile. Ditched the mentality that a tripod is a necessity and also never used any filters again. High ISO and noise? Sure why not? I started using the Fuji more and more until it became my number one camera. Coupled with the 23mm f/1.4 I didn’t need anything else. Finally I had just what I wanted that allowed me to photograph everywhere I was.

The beauty of just being yourself and not trying to follow trends or squeeze your mind and wallet on ways to be unique other than being you, is that you can photograph anything and everywhere proving that that the subject interest you. When you reach the point of knowing who you are and knowing what you want you don’t need Vestrahorn or Matterhorn or any other horn in order to be you.

I can be just a bush in the right lighting conditions or in my case just shade. I don’t need anything else. Iconic locations help but they can also lure you back to epic and just like the Sirens their song is sweet and welcoming. But I was unaware of it and until 2015 I have never left the confines of Greece to explore the world photographically but I had to know. So I travelled.

My first stop was Tuscany trying to set up a workshop with the company Light=Explorers.com that two fellow photographers and me had set up. For the first time in my life I travelled with just a carry on backpack that also included my photographic gear. The X-T1 the 23mm, the 56mm, a couple of batteries and a charger. I was in heaven.

I was determined to hear the Siren song and resist it. But; I failed. Well for the first two days at least. The scenery was overwhelming and I was photographing it but I wasn’t happy with my images. Not that they weren’t good, they were just not me. Anyone could have taken the same and everyone did. Until I snuck into a garden surrounded by tall walls secluding me from all other surrounding and I found myself again. Right there a project was born in my mind and I made four images that noon that spoke straight to my heart.

Thinking back at those days I know for sure that if I had taken the D810 I never would have made those images because I wouldn’t bother taking it out of my bag, mount a lens and hold that heavy thing for two hours going around trees and bushes. Not to mention Classic Chrome. I just love that profile and it reduces my editing time in Adobe Camera Raw to minimum. All I need to do is make some lighting adjustments add a vignette and I am done. Well kind of. I have a few tricks up my sleeve but this is for another article.

After Tuscany then came Iceland where we would camp for nine days on a trip around the south and the southern highlands. For that trip I used the Nikon and I kind of regretted it but back then I trusted Nikon built quality more than the Fuji to tell you the truth and it was a rough trip for sure. By then I learned my lesson and found a simple solution. Get the iconic shot out of my system early on and then focus on me and find ways to connect with this alien landscape in an internal level. It worked and it kept on working ever since.

My ultimate challenge both mentally and gear wise was our Lofoten workshop last February where just like Tuscany I grabbed only the Fuji and the 23mm. It was liberating. It was my most productive trip, I never used my tripod once and believe me the temptation was strong but I ignored it and only listened to my heart. And when the aurora was strong right above us and everyone else has gathered in a line trying to capture it, I just laid back lit a cigarette and thought of how I wish my girlfriend was here to see this with me.

I have enjoyed many years of happiness with my Fuji X-T1 but by 2019 it was showing her age and I needed to upgrade. So I bought a Nikon Z7.

People who know me would understand if I ended this article with the above sentence but since this is a Fuji related magazine please let me explain myself before you stone me to death. I wanted image stabilization in a body that suited me and the X-T line doesn’t have one. The X-H1 isn’t the right camera for me and I just loved the Z line viewfinder.

I miss classic chrome though and this is a good enough reason to buy an X-T30 which is in my immediate plans. When I do I know it that this will be my go to camera for photography and have the Z for video mostly. So like I said in the introduction, I might also use Nikon gear but my heart lies with Fuji. It has played an integral role in shaping the photographer I am today and for that I am grateful. 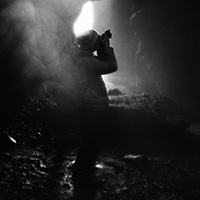 Konstantinos Vasilakis is an international award winning landscape photographer based in Greece. His love of photography lead him to his favorite Greek mountain where he lives and teaches photography. He is also part of the Light-Explorers company where he co-leads workshops around the world. His work can be found on his personal website and on popular social networking platforms.

Konstantinos Vasilakis is an international award winning landscape photographer based in Greece. His love of photography lead him to his favorite Greek mountain where he lives and teaches photography. He is also part of the Light-Explorers company where he co-leads workshops around the world. His work can be found on his personal website and on popular social networking platforms.

Posted on June 25, 2020June 25, 2020by Stefan Panaitescu
When I switched from Sony to Fuji, I had no idea how much photography would actually grow on me. Of course, I wanted to get better and take nicer shots, but since that first tr…
END_OF_DOCUMENT_TOKEN_TO_BE_REPLACED
Categories INSPIRATION

Posted on June 22, 2020June 22, 2020by Jeremy Roschelle
On March 10, 2020, our San Francisco Bay Area office closed. Suddenly, we were all working from home. On the 13th, I noticed the lovely tulips in the front of my house and took a …
END_OF_DOCUMENT_TOKEN_TO_BE_REPLACED
Categories INSPIRATION

Posted on June 18, 2020June 18, 2020by Marcelo de Coghlan
Photos of motorcycles and their owners are undoubtedly my favourite thing to shoot. Oftentimes, having someone show their essence and their relationship with their vehicle takes t…
END_OF_DOCUMENT_TOKEN_TO_BE_REPLACED
Categories INSPIRATION

Posted on June 15, 2020June 15, 2020by Jonathan White
Me, Myself and IMy first love and introduction to photography started at a young age where my dad used Minolta film cameras for all our holidays where he enjoyed street scenes, es…
END_OF_DOCUMENT_TOKEN_TO_BE_REPLACED