An addiction to “storytelling” moments in Sports Photography

Meath vs Cork in the All Ireland Final 1988. Meath player, Gerry McEntee (on the right) professes his innocence after fouling a Cork player in the centre of the image. Four other Cork players (arranged in a semi-circle) are pointing at Gerry McEntee, as the guilty party. 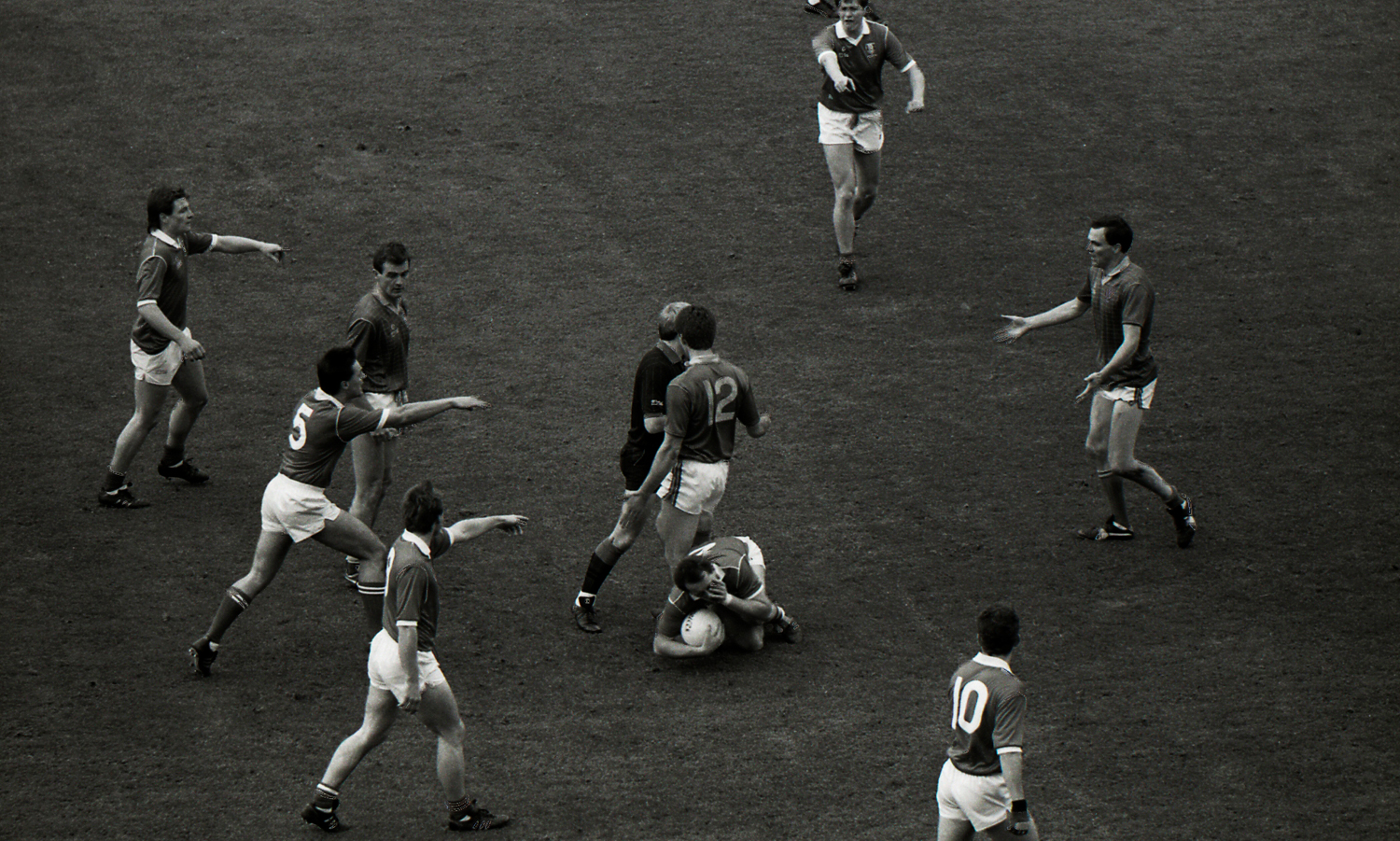 In sports photography, capturing the passion, the determination and indeed the frustration is the bread and butter of sports photographers. It has long been accepted that “peak of the action” moments convey a sense of these emotions, however these moments come and go in fractions of a second. Capturing peak of the action sporting moments requires a degree of anticipation combined with skill and in many cases – a little luck!

A fast moving sports car photographed with a high shutter speed will look static in the image and fail to inform the viewer of the exhilaration, the energy and the excitement that existed at the moment when the image was captured. On the other hand, if a slow shutter speed is used, and combined with a panning technique, the fast moving vehicle conveys energy, motion and hence excitement. An additional tilt, either in camera or in-post will add a diagonal compositional element which also increases the energy of the image.

A combination of a very slow shutter speed with flash can convey motion, but also sharpness to give the image an arty look.

The techniques used for storytelling in sports photography vary depending on the type of sport. In fast paced ball sports, where the story is captured through the facial expression, or the tension in the players body …. moments which are generated and gone in fractions of a second, the emphasis is on “peak of the action”. This technique requires fast shutter speeds, typically greater than 1/1000sec.

In cycling, horse racing and road / cross country athletics, the “peak of the action” moments may be confined to the home strait run to the winning post, but the story of these sports – the energy and the excitement can be conveyed through fast and slow shutter speeds and also through composition viewpoints.

In conclusion, you could ask the question, “Are all `peak of the action` images the same?” I think the answer to this question is subjective. If you can convey a sense of action, energy and exhilaration through your images, then each event will be different and the addiction to “catch the moment” and tell the story through images will be an endless quest.

“My name is David Mullen, and I am a photographer based in County Meath, Ireland. I have always had a somewhat passive interest in sport, but in 1988, I captured an image at a gaelic football game which told a story without words. From that day, I have tried to freeze the “peak of the action” moments that happen many times during sporting events, but can be fleeting, elusive and difficult to capture.
This addiction to try and “catch these moments” makes every event different.
I have used Canon equipment for many years, but I am currently transitioning to the Fuji X-T3.”

What focal length are you?

Trying to capture the potential