Hello! My name is Kris Desautels and I’m a 43 year old street photographer from Chicago who’s been shooting for almost 2 years. My wife and I have an apartment located on the North Side, a short walk to the shores of Lake Michigan, and just a few stops on the ‘EL’ train to the downtown Loop. For work, I’m a production Supervisor at a stainless steel service center on the South Side.

I grew up spending a lot of time on my own, listening to music, drawing, or putting model cars together. Film cameras were always around, as well as digital point and shoots when they became available. What I remember most about the film camera was choosing the right ISO setting for the type of light I planned on shooting. I suppose the seeds of photography were laid very early, but it would be years before I picked it up again.

During the last 10 or so years, having a solid day job, I found I was restless, in search of an outlet to satisfy me creatively. I became a trained actor, did some small commercial and independent film shoots, but realized the industry was not for me. I considered music, having taught myself how to play guitar, but still felt lost, and unfulfilled. I started to do some online research of different cameras, found the Fuji system, and started to read about it. The more I learned, the more it seemed that it was a perfect fit for me.

The Beginning
I purchased the X100T, bought a tripod, and set out to capture long exposure cityscapes. Having discovered the work of some local photographers, I became obsessed with different locations in Chicago, and began for the first time, to walk the streets with my camera and gear. I didn’t know anything about street photography, and had fun meeting some new people, setting up a tripod, and learning all about light, shutter speeds, and aperture.

After many outings shooting long exposures, I no longer enjoyed carrying around a tripod, and sought instead to minimize my gear, and explore shooting carrying just the camera. I explored light and how it interacts with people on the street, and in my spare time listened to podcasts on the techniques of photography, and committed as much as I could to memory.

I was bursting with ideas I didn’t know how to express. I discovered the work of Ray Metzger, and it forever changed how I see the city. I came across works by Fan Ho, Junichi Hakoyama, and a local named Frank Bell. The black and white work of Jason Peterson and Josh Rose came into my awareness, and this world of infinite possibilities consumed me. I was hooked! 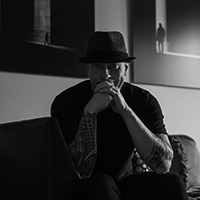 Kris Desautels has been making photographs for the better part of 2 years. He grew up in the south suburbs of Chicago, and has lived on the North Side for 20 years. His influences include Ray Metzger, Alan Shaller, Fan Ho, Frank Bell, and Januchi Hakoyama.
You can find him out on the streets of Chicago on the weekends, or running a shift of metal workers during the week on the south side of Chicago.

Kris Desautels has been making photographs for the better part of 2 years. He grew up in the south suburbs of Chicago, and has lived on the North Side for 20 years. His influences include Ray Metzger, Alan Shaller, Fan Ho, Frank Bell, and Januchi Hakoyama. You can find him out on the streets of Chicago on the weekends, or running a shift of metal workers during the week on the south side of Chicago.

Posted on May 18, 2020May 19, 2020by Facundo Santana
Facundo Santana, one of the most acclaimed Wedding Photographers today, granted us this interview, in which he describes his career, the development of his style and his approach …
END_OF_DOCUMENT_TOKEN_TO_BE_REPLACED
Categories PREMIUM

Posted on May 4, 2020May 5, 2020by Maurício Reis
The title may lead you to think that I am isolated and that I have finished all Netflix series, all magazines and books, on paper or virtual. Or that I spend my life running to th…
END_OF_DOCUMENT_TOKEN_TO_BE_REPLACED
Categories PREMIUM

Premium “Dealing with the unknown is a big part of landscape photography.”

Posted on April 14, 2020April 14, 2020by Anthony Robin
My name is Anthony, I just got 34 this year and I am a traveller, a coffee lover and a French landscape photographer. I totally fell in love with photography in my mid-twenties an…
END_OF_DOCUMENT_TOKEN_TO_BE_REPLACED
Categories PREMIUM

Posted on April 2, 2020April 13, 2020by Sebastian Boatca
As many of us already know and feel, making photography with Fujifilm is a powerful, pleasant and liberating experience. I will try to explain the best I can what is this sort of f…
END_OF_DOCUMENT_TOKEN_TO_BE_REPLACED