“I’m a Nikon guy,” I thought as I browsed through the list of Fujifilm X-T4s. “However, they do look really cool and geez, look at those video capabilities! Maybe it’s finally time to make the jump?” It took some arguing with myself in the mirror, but I eventually jumped the Nikon ship and am now the proud owner of a mirrorless Fujifilm X-T4.

Confession time, I haven’t completely jumped the Nikon ship. I work for the Navy as a Mass Communication Specialist, hence my ship references (wink wink). An MC is essentially a photographer, designer, videographer, writer, computer wizz, and genius/superhero. So whenever I’m requested to do a photoshoot requiring two bodies, I’ll bring along a Nikon D850 with a AF-S NIKKOR 70-200mm f/2.8G ED VR II lens and my Fuji X-T4 with a FUJINON XF 16-55mm F2.8 R LM WR.

On said shoots, I find myself comparing the two cameras in capabilities and it’s hard to compare a beast of a camera like the Nikon D850 to the Fuji X-T4, because it’s full frame, isn’t mirrorless, and did I mention the price tag? I didn’t? Well it’s almost $1000 more for just the body.

Yes, the D850 is a fantastic camera, but on shoots with these two bodies I tend to lean towards my X-T4 in pinch moments. To illustrate a pinch moment, let’s say you, the reader, were shooting a graduation for the Naval Academy in Annapolis, Maryland. It’s a little cloudy outside so the diffused light makes it easy to keep a good exposure on their black and white uniforms. The graduation comes to an end, they throw their covers into the air, and begin to congratulate each other.

Friends are shaking hands, hugging, and taking group selfies. In the corner of your eye you see a graduate on one knee, praying in front of his deceased friend’s chair that holds nothing but his football helmet. What camera do you pick and why did you pick the X-T4? Well, I was in this situation and I picked the X-T4, shot continuous high, and nailed the frames.

If I would’ve picked the D850, odds are I would’ve gotten the shot, but I knew the X-T4 could give me almost double the frames per second. This thought process happened instantaneously, I trusted the X-T4 to get the shot even after owning it for only a few days.

Let’s back up a bit though, you don’t really know me, the writer, as a person or a photographer. In college, I inherited my mom’s digital camera for a college class. She had fallen out of love with photography and I needed to pick up some credits to graduate from Murray State University, so I thought Art Photography should be an easy A, because anything can be art, right? Boy, was I dumb.

Even though I didn’t excel in the class academically, I began to see photography as an art form and a way to capture a feeling. I took a couple more photography classes before graduating and realized that I probably should’ve changed my major a long time ago. However, classes are expensive and I couldn’t stay in school forever.

I graduated from Murray State University, and immediately got a high paying job at National Geographic as a staff photographer… yeah, just kidding. I graduated, sat on the couch for about 9 months looking for jobs in my field, then jobs neighboring my field, then just any job. I soon found out that my way of life wasn’t going to give me the results that I wanted and I needed an abrupt change. Most importantly, I didn’t make any photos during this period.

I joined the Navy.

Shortly after joining the Navy I became an MC, deployed 3 times in 3 years, got accepted to the Military Photojournalism Program, got a masters degree in Multimedia, Photography and Design from Syracuse University and now I work at All Hands Magazine, the premier magazine for the Navy. In a way, photography turned my life around.

Now back to this awesome camera!

I got the X-T4 so I could start building work outside of the military and photographing my family inspired by work like Terra Fondriest and Matt Eich. These factors helped push my decision towards Fuji, but I was still a little uncomfortable completely switching camera systems. I thought, “what if the settings are SO different that I’m unable to transition smoothly, what if, what if…” Luckily, they included a camera manual to put people like me at ease. However, what really shoved me into buying a Fuji was admittedly the film profiles (that I actually hardly ever use), that sexy Fuji color science, and the video capabilities that, well, I’ve begun to use quite a bit.

I haven’t really been into shooting video that much in the past, but this camera makes it fun and effortless. The focus tracking is remarkable, the internal body image stabilization is great, and the ability to shoot 4K resolution at 60fps when rival cameras are at 30fps makes this camera a must. However, whenever put under a strenuous workload this bad boy heats up quite a bit. For instance, shooting 4K for 15-20 minutes at H.264, alternating between 30-60fps and HD at 240fps with continuous focus. It might be normal, but as someone new to the Fuji/mirrorless system it was rather alarming. It could be due to a number of factors, like the quad core processor, the battery, the LCD screen, etc. It doesn’t halt its performance, I just thought it was a bit odd.

Ok, now my favorite part is that sexy Fujifilm color science. I use Lightroom to catalogue and tone my imagery before exporting to .jpg files. The natural “special sauce” profile is just what I’m looking for in an image. The reds are naturally vibrant, the greens seem rich and deep in tone, and the blues are smooth. When it comes to post processing images for our magazine or for work outside of the Navy, I find myself making fewer adjustments because I personally love the images straight out of the camera. Before I bought the X-T4 I was used to spending a few hours toning my images, just to make them seem like an accurate representation of what I saw through my own eye. They look so good straight out of the X-T4 I hardly do any toning at all, I even brag about it.

I’ve had this camera for 6 months and I think it’s safe to say that I’m a “Fuji guy” now. There are tons of factors of why I will put this camera against any one of its rivals. It’s not heavy, making custom profiles is a breeze, its ergonomic, glass is comparatively inexpensive, the battery life is decent and above all else, I trust it. 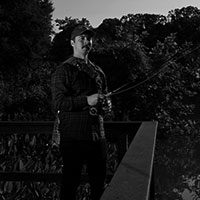 Levingston Lewis is a Mass Communication Specialist 2nd Class Petty Officer in the U.S. Navy. He is a photographer, a videographer, journalist, and Sailor, but above all else, he is a storyteller. As a devoted husband and proud father, much of his work revolves around relationships and how those relationships are part of the bigger picture: community. This approach to his work largely stems from his family, but also as a small-town-boy from Kentucky.

Levingston Lewis is a Mass Communication Specialist 2nd Class Petty Officer in the U.S. Navy. He is a photographer, a videographer, journalist, and Sailor, but above all else, he is a storyteller. As a devoted husband and proud father, much of his work revolves around relationships and how those relationships are part of the bigger picture: community. This approach to his work largely stems from his family, but also as a small-town-boy from Kentucky.

Posted on December 4, 2020December 4, 2020by Earl Goodson
Last May, I ended up putting my X-T2 and interchangeable lens collection up for sale on eBay. Not because I was dissatisfied with them but because I was considering something dari…
END_OF_DOCUMENT_TOKEN_TO_BE_REPLACED
Categories INSPIRATION

Posted on October 16, 2020October 16, 2020by fujixpassion
When we first saw Loïc Casanova's work, we were blown away. We confess that we have always been fond of black and white photography, but Loïc's images have something special, myst…
END_OF_DOCUMENT_TOKEN_TO_BE_REPLACED
Categories INSPIRATION

Posted on January 5, 2021January 5, 2021by Ben Wagner
On Thursday March 12th I got the call from my local camera shop: my new, black, Fujifilm X100V — which I had pre-ordered months ago — was finally here. The night before, the Utah …
END_OF_DOCUMENT_TOKEN_TO_BE_REPLACED
Categories INSPIRATION

Posted on February 12, 2021February 9, 2021by Mariana Cheoo
Mariana Cheoo was born and lived in Lisbon, Portugal. She was a restless and curious child, willing to explore the world. Miss Engineer, to the delight of her parents (and she jus…
END_OF_DOCUMENT_TOKEN_TO_BE_REPLACED