November 2015. I had been working as a professional photographer for almost 25 years. Due to my busy schedule, and since I switched to digital photography in 2001 with the Nikon D1X, my personal work had taken a back seat. The fact that I didn’t find a digital camera that was both appealing and delivering good image quality at the same time, didn’t help in that respect.

Admittedly, the Nikon D1X (and the future D-upgrades) did what it had to do, but it was too big to be toting around in my free time. At first, I still took my Leica M6 with me but since there was no need to set up my darkroom for my professional work anymore, it more and more became a hassle. So after a while, the Leica M6 too started collecting dust on a shelf.

But then, in November 2015, my lovely wife surprised me with a fabulous gift that shook my world: a Fujifilm X-Pro1 Big Deal Set. Consisting of the X-Pro1, the Fujifilm XF 18mm F2 R, Fujifilm XF 27mm F2.8 and a leather case. It was a game-changer.

Early days
I was born into a family where photography was always present. The first camera I took a picture with was a Voigtländer Vitomatic III CS, the poor man’s Leica. And when I was twelve, I for the first time saw an image appear on a previously white paper in the darkroom. I was hooked for life.

After high school, I enrolled in Art School and studied graphical arts and photography. At that time I was shooting a Minolta XD5 which I soon swapped for a Nikon F3HP (the photo of the Russian soldier in the Red Square in Moscow is shot with that F3HP). It was the start of a very long relationship with Nikon, that still was very much alive that day in November 2015.

That doesn’t mean I didn’t use any other equipment. After finishing Art School I worked for a while as a graphical designer and kept on shooting the F3HP. When I travelled to Spain to make my first travel reportage it was the one camera I took with me, accompanied by a 35mm f/2 and a 50mm f/2 lens.

A year later I became a professional photographer and invested into Pentax. The 67 system to be more precise, with lenses ranging from 55mm to 200mm, including a 75mm shift lens. At the same time, I bought a Leica M6 and a Summicron 35mm.

So in 1993, I made plans to document the popular culture in Mexico. I focussed on three expressions of that popular culture; the lucha libre (professional Mexican wrestling), mariachi music and the omnipresence of Catholicism. After a lot of preparation and contacts with local organizations, I packed my two Pentax 67’s and the Leica M6 and left for Mexico City.

It wasn’t for very long before the Leica got stolen from my hotel room in Mexico City. For the rest of the trip I had to rely on the two Pentax’s, and they performed outstandingly. I met with mariachi bands, hung around the Basílica de Santa María de Guadalupe – the most visited Catholic pilgrimage site in the world – and attended several lucha libre arenas.

I even met with Mexican photographer Lourdes Grobet, who is famous for her portraits of wrestlers. She gave me valid tips and opened doors for me. But then something unexpected happened. The Mexican football team qualified for the coming world cup and fans celebrated in the streets of Mexico City.

I hadn’t planned for that but I joined the fans and shot one roll after the other. I enjoyed it extensively. Despite the fact most of my photographs in Mexico were taken in the streets, I still saw myself as a documentary photographer and not a street photographer;

I can’t determine a single point in time, or a pivotal moment but my emphasis started shifting from the great novel to the short story, from the rigid document to the spontaneous impression. And it all fell into place during my visit to Japan around the turn of the century. Just like before I had meticulously planned my subjects; I was fascinated with Kyudo, the Japanse martial art of archery in which the goal is to reach true shooting, and as always I would focus on religion too.

But when I arrived in Tokyo I found myself dwelling the streets more often than not. I strolled through the public parks and gardens, and met with homeless people along the banks of the rivers crossing the metropole. I no longer worked from within a well-defined concept but I tried to keep an open mind and photograph the unexpected, the wonder and astonishment. In hindsight, it seems I already was aware of that shift to happen before I actually knew.

The gear I had packed pointed in that direction too. I had left the Pentax’s at home and travelled with a (new) Leica M6 paired with a Summicron 35mm, and a Nikon F5 with a 24-70mm f/2.8 zoom. In the end, I shot almost exclusively with the M6.

Japan was the last of my personal projects for quite a while. I became a father, started shooting digital and my newspaper job took up all of the time. I still did a couple of short trips with the M6, to Turkey, Scandinavia and the USA but nothing very substantial. That was the situation in November 2015.

Passion and pleasure
My wife had read the situation far more precisely that I had done. She knew exactly what I needed. The Fujifilm X-Pro1 she gave me brought back the pleasure, passion and excitement that I first felt when I shot the family Voigtländer as a young kid. But as great as the X-Pro1 was (and still is), it could never replace my Nikon gear for my professional work.

Furthermore, I never was convinced of the idea that the so-called full-frame route was the way to go. Since the D300, the APS-C format had grown on me and very soon I regretted buying the D800. So I waited for the D400 to appear. Which never happened.

At that moment Fujifilm Belgium contacted me and asked if I wanted to try out the newly announced X-Pro2 and X-T2. Of course I was interested. Not so much in the X-T2 but I sure was looking forward to hold and shoot the X-Pro2. Boy, was I wrong. As soon as I laid hands on the X-T2 I was sold.

I barely gave the X-Pro2 any notice and the idea grew to replace my Nikon stuff with the Fujifilm X-T2, and to use the same gear professionally and for my personal work. Travel light was my new mantra and instead of zoom lenses, I would choose primes only. So that was what happened, I ordered two X-T2’s, and four primes, ranging from 23mm to 90mm.

Fuji didn’t offer a pro flash at that time, so I also ordered two Nissin i60A’s and an Air 1 remote commander. I also bought the Fujifilm Vertical Power Booster but I have hardly ever used it.

Since the full switch to Fujifilm, I do a lot of shooting on the street again and I finally came to terms with the concept street photography. I have just finished a project called Eight-bar Blues in Open G. It is shot in the streets of my hometown Ghent and I focus on sole individuals in the open space of an almost generic city (G for Ghent).

The subjects are on the move, they seem to be looking for their own space, a place to belong, both in the photograph as in the city they live in (and the world as a whole). Perhaps somehow just like I am as a photographer looking for my own place in the canon of photography. In that regard, and to some extent, these photographs can be seen as self-portraits.

To upgrade or not to upgrade
Today I’m still very happy with the X-T2 system. I don’t feel the urge to upgrade to every new model that hits the shops. The X-T3 offered in my opinion too little of a step up to the X-T2. And probably the same can be said about the X-T4. I’m more tempted with the X100V, if any. But I think I’ll stick to my trusted X-T2s for some time to come. They are my highly valued companions. 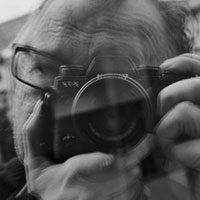 “I’m a Belgian photographer living in Ghent, married and father to a son. I was introduced to photography as a young kid in the early 70’s and later studied graphical arts and photography. During my studies, I got hold of the darkroom course by Belgian Magnum photographer Carl De Keyser and together with the Ansel Adam’s books on zone photography it made me very confident in printing black & white. Since 1992 I’ve been working as a professional photographer, mainly shooting environmental portraits for magazines and newspapers, alongside my personal uncommissioned work.

Besides photography I’m interested in literature and music (both as a listener and a player). I strongly believe there are a lot of similarities between music and visual arts. All is based on relationships between different elements within the song/picture and they both thrive on rhythm and cadence.”

"I’m a Belgian photographer living in Ghent, married and father to a son. I was introduced to photography as a young kid in the early 70’s and later studied graphical arts and photography. During my studies, I got hold of the darkroom course by Belgian Magnum photographer Carl De Keyser and together with the Ansel Adam’s books on zone photography it made me very confident in printing black & white. Since 1992 I’ve been working as a professional photographer, mainly shooting environmental portraits for magazines and newspapers, alongside my personal uncommissioned work. Besides photography I’m interested in literature and music (both as a listener and a player). I strongly believe there are a lot of similarities between music and visual arts. All is based on relationships between different elements within the song/picture and they both thrive on rhythm and cadence."

Posted on November 19, 2020November 17, 2020by Corrado Fulvi
There are places in the world whose origins are intertwined with stories and legends with a golden thread. Prague, with its smoky atmosphere, the baroque churches that stand sever…
END_OF_DOCUMENT_TOKEN_TO_BE_REPLACED
Categories INSPIRATION

Posted on January 1, 2021December 29, 2020by Lin Qi
My name is Lin Qi, and I am from China. I live in New York. I am a photographer, but I also do other jobs to fund my photo projects. I love photography more than anything else.…
END_OF_DOCUMENT_TOKEN_TO_BE_REPLACED
Categories INSPIRATION

Posted on November 11, 2020November 11, 2020by Jakub Gráf
Hello everybody, let me introduce myself. My name is Jakub Gráf, but you may find me as @zahorizont and @grafworks_leathergoods on Instagram. My main focus is portrait photography…
END_OF_DOCUMENT_TOKEN_TO_BE_REPLACED