Last May, I ended up putting my X-T2 and interchangeable lens collection up for sale on eBay. Not because I was dissatisfied with them but because I was considering something daring. Something that had been on the back of my mind for nearly 6 months before but I didn’t dare try.

I came to realize that I was spending way too much time reading about camera technology. If I spent as much time shooting and watching tutorials as I did browsing tech specs, my portfolio would be fantastic.

And I realized that by using an ILC I would never truly feel like I had enough. There would always be some other lens to tempt me, to whisper about possibilities still uncaptured. “What if you had the 16mm f1.4? Imagine a shallow depth of field on a wide-angle!” Or “why did you sell the 35mm f1.4?…Remember the magic pixie dust? Looks like there’s a good deal on a used one on eBay!”

So I decided to take a break from the lens treadmill. Weather resistance had been the one thing keeping me tied to my X-T2 because I definitely put it to use. But when the X100V was announced as a weather-sealed compact, I realized I finally had no excuses left. One camera, one lens, one year, and a big stack of batteries. Why not? Everyone who I could find that tried it said it was fantastic for their photography.

“One camera, one lens, one year, and a big stack of batteries. Why not?”

When my new camera arrived, I immediately put it through its paces. It was a substantial adjustment for me because I’m much more at home with a comparatively tight, clean 35mm prime like the XF 35mm f1.4 than I am a 23mm. Still, the extra bit of width was appealing because it let me include that little bit of environmental detail, challenging me to consider composition in a different way.

I’m still shocked by what the exercise has done for my work. The X100 series really is something special. The size of the camera ensures you’ll never have much of an excuse not to bring it with you. While it’s not truly pocketable like an X70 or a Ricoh GR, it still fits snugly into a side satchel or coat pocket.

And the image quality is top-notch because the X100 series uses the latest generation Fujifilm tech. The V is basically a miniature X-Pro3 with a fixed, redesigned 23mm f/2 lens attached and one less card slot. I suppose that’s enough camera for me to work with…

As a documentary photographer, I was concerned that a fixed prime compact camera might not be up to snuff for field work. A good zoom or a series of quickly swappable primes really is ideal because sometimes you just can’t zoom with your feet. But I quickly discovered why the 35mm equivalent is considered the classic photojournalist’s field of view.

It is incredibly flexible. Crowds, portraits, architecture, and anything else fit into the frame very naturally with easily controlled perspective distortion relative to wider lenses. There were very few times I was held back from capturing a specific shot because I’ve always preferred using normal focal lengths anyway with my work. They create a sense of place and intimacy that telephoto focal lengths don’t. That said, I don’t shoot war photography, otherwise I’d have to reconsider.

During the protests in the wake of George Floyd’s shooting, I found the X100V to be well up to the task. The lens focuses and tracks quickly, is sharp and contrasty, and the onboard flash adds just the right amount of fill light in TTL mode. When working in the heat of the summer, I was concerned about the warmth it generates but not once has it ever overheated or shut down, even with constant use in the sun.

I’m still unlocking the possibilities offered by the leaf shutter as flash photography has never been my strong suit. Being able to shoot at shutter speeds faster than 1/250ths of a second allows me to shoot daylight portraits wide open at f/2. And of course, there’s the built-in 4-stop ND filter to make f/2 shots in broad daylight even easier.

The number of tricks this camera has under its tiny hood is incredible really. While there isn’t a polarizing filter Color Chrome Fx/Blue helps tease out additional tonality in most scenes so long as you don’t mind using the in-camera JPEG suite.

The hybrid EVF/OVF is a nice trick as well. I haven’t had an OVF since my last DSLR. But covering a couple night protest marches in Kenosha reminded me just how useful they can be compared to an EVF.

I think the greatest shift over the past 6 months has been how much closer to my subjects I tend to get using this camera. The small, unobtrusive size of the X100V and wide-normal view encourages me to move in, giving my images an impact that I think was lacking before.

If I’m being honest though, there were times I did crave a 50mm or 28mm equivalent. I found the X100V’s 35mm equivalent tight for crowd work especially. There were rare moments where it simply wasn’t possible to back up a step or two. Still, I went into the challenge knowing there would be those times so I can’t complain.

Far more importantly, it’s fun walking around with a small camera. I wanted to recapture the feel that I had when I first started photography. 20 years ago, before I cared about money and people liking my work, I had a simple digital compact that went with me everywhere. I took photos of anything that caught my eye. It was a style that was innocent and playful.

Bringing my X100V to the grocery store, the park, the gas station, or wherever else I’m going opens up chances to take photos of daily life that are uninteresting to anyone but myself. But by taking those images, I’m honing my artistic vision just that little bit more, even if it’s just a street portrait, leaf, or cigarette butt.

I’m officially 6 months into my project and looking back, I can happily report that I rediscovered the fun factor I was craving. And when I do documentary work the X100V enables my creativity even better than my X-T2 ever did.

It provides everything I need and then gets out of my way. ND filter, flash, customizable buttons and menu, dedicated exposure dials, top-shelf sensor… The camera is such an extension of my will that I can mostly operate it without looking.

Despite this glowing review, I’m actually somewhat ambivalent on whether I will continue. On the one hand, I’ve captured some of the best images of my life and found out that a bit of wide-angle really is lovely.

On the other hand, I do miss the classic tight-normal view, especially for portraits. While I see better with the wide-ish native lens than I did before, I sometimes peek at the digital teleconverter, just to see how it looks.

6 months in I still frame more naturally with the tighter view. Do I swap back? Grab the TCL-X100? Stick it out another 6 months and see how I feel?…Decisions, decisions…

But for now, with winter at hand and few projects to work on, the X100V remains my daily companion. Every day, it encourages me to get out and simply look for beauty. To simply pay attention to what’s happening in the moment and think less about “if only I had X lens.”

I’ll probably always crave a different view, a newer camera. I’m still a bit of a gearhead. But it’s harder to pretend now that I actually need said gear with such a capable companion in my bag! 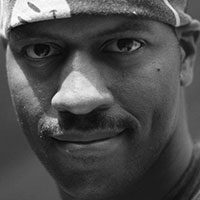 After discovering a love at a young age for digital photography, Earl Goodson has kept a camera in hand throughout his years of world travel. Documentary, travel, and street photography are what captivate him: the human experience in all of its permutations and expressions. And the closer he can get to his subjects the better.

After discovering a love at a young age for digital photography, Earl Goodson has kept a camera in hand throughout his years of world travel. Documentary, travel, and street photography are what captivate him: the human experience in all of its permutations and expressions. And the closer he can get to his subjects the better.

Posted on April 9, 2021April 9, 2021by Leroy Souhuwat
It is the year 2018, I moved to Iceland, the land of fire and ice. Everyone might know it holds astonishing beauty in its nature. That also triggered me in buying my first camera …
END_OF_DOCUMENT_TOKEN_TO_BE_REPLACED
Categories INSPIRATION

Posted on April 15, 2021April 15, 2021by Alwin Kok
First of all, I would like to thank Mr. Keitaro So, Divisional Head of Fujifilm for providing the loan for X-S10 and XF18mm F1.4. The units were loaned from Fujifilm Asia Pacific …
END_OF_DOCUMENT_TOKEN_TO_BE_REPLACED
Categories INSPIRATION

Posted on April 6, 2021April 6, 2021by Anh Vu Nguyen
My name is Anh Vu Nguyen, and I'm a 27-year-old mechanical/industrial engineer. I grew up and currently live in Pilsen, Czech Republic. As a second-generation immigrant from Vietn…
END_OF_DOCUMENT_TOKEN_TO_BE_REPLACED
Categories INSPIRATION

Posted on March 31, 2021March 30, 2021by André Wagenzik
My name is André Wagenzik and I live as a photographer in Berlin. My main areas of activity include congress and conference photography. However, due to the corona pandemic since …
END_OF_DOCUMENT_TOKEN_TO_BE_REPLACED