Along the West coast of Ireland, the iconic Cliffs of Moher in County Clare, loom large against the harsh Atlantic shore. The spectacle draws tourists from around the globe, each hoping to capture this geological marvel in bright sunlight. Only today, the forecast predicted otherwise. Before leaving, I knew the cliffs were likely to be shrouded in fog. I sensed an opportunity and set out in hope.

For equipment, I brought the Fujifilm X-Pro2 with my choice of glass, the Fujinon 23mm f2 lens. I suspected that swapping lenses would be difficult because of the weather and, as much as I love the XF35mm F2 lens, the 35mm field of view is more versatile. The wider angle allows for a more panoramic scene. One camera and one lens combined with weather sealing were ideal.

As I passed the visitor car park and tourist building, I was full of excitement. Can you imagine the scene when I scaled the walkway and stepped out as close as is permitted to the edge? Nothing! I saw nothing. In stark contrast to so many images I had previously seen.

Yet, it was still the most intense spectacle to behold. Though the wind was strong and the rain sporadic, you could hear the crushing force of the waves below. The only way to describe it is power – the awesome power of the elements.

A scattering of people was dotted along the stone and mud trail, some covering their faces, others peeking through ponchos, all trying their hardest to catch a glimpse of the cliffs and sea below their feet.

To witness this landscape – eerie, haunting, melancholy under a blanket of fog – was a truly gratifying experience. A marvel indeed with something majestic to offer in all kinds of weather. Senses heightened, camera in hand, my eye seized the day.

I am naturally drawn to the look of film. It could be something that stems from childhood and gazing at old family photos. For post-production, images were brought into Adobe Lightroom and I applied a Fujifilm Superia emulation.

Depending on the photo, I slightly underexposed with a few minor adjustments on shadows and highlights. That’s it. No complicated editing, long hours arched over a laptop.

Photography, for me, is subjective, an intuitive art. It’s the vision that counts. The editing is secondary. While it’s good to have options (I have the 35mm F2 and 50mm F2 glass, which I really like), sometimes using one camera and one lens can be liberating. Placing the viewfinder up to your eye, you see the shot. It’s a matter of instinct, accepting what appears – a split-second gift. 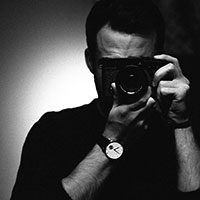 “I was born in Dundalk in the North East of Ireland in 1985. My first step into photography was in 2011 at my local college where I studied black and white film photography. After, I gravitated towards digital. My preferred genre has always been Street but I have shot a wide variety of work over many years from Weddings to Portraits. Depending on the environment or scene, I’m captivated by light, shadows, lines and strong composition.”

"I was born in Dundalk in the North East of Ireland in 1985. My first step into photography was in 2011 at my local college where I studied black and white film photography. After, I gravitated towards digital. My preferred genre has always been Street but I have shot a wide variety of work over many years from Weddings to Portraits. Depending on the environment or scene, I’m captivated by light, shadows, lines and strong composition."

Posted on December 15, 2020December 14, 2020by David Lowcher
Asbury Park, New Jersey, or the historic “City by the Sea”, is a crowded sea shore town with a bustling, picturesque boardwalk. Springsteen seems to like it quite a bit. In the he…
END_OF_DOCUMENT_TOKEN_TO_BE_REPLACED
Categories INSPIRATION

Posted on December 8, 2020December 7, 2020by Ahmet Parlak
First of all, thank you very much for this opportunity! My Name is Ahmet and I’m from Munich, Bavaria in South Germany. Maybe you know the biggest Beerfest in the World called …
END_OF_DOCUMENT_TOKEN_TO_BE_REPLACED
Categories INSPIRATION

Posted on December 24, 2020December 23, 2020by Nicolas Wauters
With a longstanding passion for Japan and its culture, it was a love story that took Belgian photographer Nicolas Wauters to Tokyo in 2013, where he has lived ever since and becam…
END_OF_DOCUMENT_TOKEN_TO_BE_REPLACED
Categories INSPIRATION

Posted on January 5, 2021January 5, 2021by Ben Wagner
On Thursday March 12th I got the call from my local camera shop: my new, black, Fujifilm X100V — which I had pre-ordered months ago — was finally here. The night before, the Utah …
END_OF_DOCUMENT_TOKEN_TO_BE_REPLACED