It is the year 2018, I moved to Iceland, the land of fire and ice. Everyone might know it holds astonishing beauty in its nature. That also triggered me in buying my first camera at the start of 2020, the Fujifilm X-T30. Living in Iceland has been a magical ride so far; I’ve got to see and capture many waterfalls, canyons, glaciers, black beaches, an active volcanic eruption and many more purchases of Fujifilm cameras + lenses haha!

Fast forward to February 2020, scientists discovered heavy seismic activity at Fagradalsfjall in the Reykjanes peninsula which is about a 25 km drive from Reykjavík. In just 2-3 weeks time we started experiencing over 50.000 earthquakes up to a 5.6 magnitude with lava also quickly rising to the surface and it turned out that an eruption was imminent. It would be the first known eruption in this area in 800 years where Fagradalsfjall actually has been dormant for over 6.000 years! So if we were to witness this, one might say it is the experience of a lifetime!

But nothing to be worried about if it comes down to our safety, because this volcanic area is mostly uninhabited and they predicted that the lava was not going to reach any of the nearby settlements.

March 19, 2021, at 9:30 pm. I was working at Loft Bar / Hostel in the heart of Reykjavík and I heard the words ‘eldgos, eldgos, eldgos!’ being shouted out by locals (eldgos means ‘eruption’ in Icelandic). Everyone was immediately looking at their phones and saw pictures of a fiery red sky above the volcanic site as if the doors to hell just opened.

Minutes later we saw aerial footage of a pilot who flew over the volcano and showed us the raw beauty of mother nature, that’s when it really got confirmed, the eruption is happening right now! I can’t describe how excited I felt because this could be a great opportunity for me to capture the erupting volcano too.

The day after, I wanted to visit the eruption site immediately, but it involved a 7-hour difficult hike through lava rock fields and mountains without a path. Was that going to hold me back? Hell no! Since the weather here in Iceland is known to change every 10 minutes. I am packing my X100V (with the adapter ring and filter to make it WR) and the X-T3 accompanied with the newly released XF70-300mm F4-5.6 R LM OIS WR, which made me have a weather-resistant setup. Yayyy, plus point!

My friends and I drove to the infamous Blue Lagoon, parked our car literally on the side of the road and started the 7-hour hiking adventure. Since I hadn’t shot anything with the XF70-300 yet, it was even more exciting to see what this glass was capable of, and guess what… it completely blew my mind!

The moment I could spot the volcano from a distance, I immediately took out my X-T3 with XF70-300 and started firing away. Euphoria, no words could describe this moment. I was even pinching myself. Am I really witnessing an active volcanic eruption? I usually see this on National Geographic or Discovery Channel and now live with my own eyes!

It was then time to get closer and closer and actually see how close we could possibly get, and it was unbelievable. Since the lava wasn’t flowing that quick, you were actually able to stand right next to it, feel the immense heat and see the earth giving birth to its own. You do have to make sure you stand out of the wind because it can blow toxic gas in your face and will significantly make breathing more difficult.

Always remember; safety first; no shot is worth more than your own life. That is where the 300mm reach came in handy, being able to shoot from a distance is a blessing. The fact that it is also capable of astonishing ‘macro’ shots, having that relatively close focusing distance, made me fall in love with the lens even more.

Next to my X-T3, I have the X100V to take some shots at 23mm to capture some wider moments, and it worked like a charm. The X-T3 hangs around my neck with a Peak Design slide lite strap, and my X100V is attached to my wrist with the Peak Design cuff strap.

By the way, my hands and fingers were definitely struggling with the strong cold wind that felt like -10 degrees Celsius! I don’t own any gloves for photography, and I probably should. But really, the excitement of seeing an erupting volcano totally made me forget about my freezing hands, not until I sat down for a bit to grab a snack and drink, that is when I realised how cold it actually was (tip: when you sit closer to the lava, you actually feel the warmth and it will heat up your body which feels incredible.). In the end, it all didn’t matter because I just witnessed and was able to capture a once in a lifetime experience, I guess…

Coming from the XF55-200 (which I sold after purchasing the XF70-300), I immediately noticed how happy I felt with that extra 100mm reach. To me, it really makes a difference being able to zoom in just a little bit more but not giving that much up on size and weight. Given that it also carries the WR tag, it has earned its spot as my new go-to telephoto lens for outdoor adventures and hikes!

Anyway, scientists here say that the volcano might continue to erupt for months or even years. Yes, they said years!

So when are you booking your flight to Iceland? 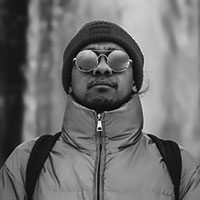 “Photographer from the Republic of South Maluku (RMS), now living in Iceland. The beauty of the nature here in Iceland made me purchase my first camera in 2020; the Fujifilm XT30. I really wanted to capture and share the magical views. That moment also marked the start of a new passion of mine… Photography!”

"Photographer from the Republic of South Maluku (RMS), now living in Iceland. The beauty of the nature here in Iceland made me purchase my first camera in 2020; the Fujifilm XT30. I really wanted to capture and share the magical views. That moment also marked the start of a new passion of mine... Photography!"

Posted on April 22, 2021April 22, 2021by Alessandra Santangelo
My name is Alessandra. I was born in Sicily, Italy, and moved to Denmark with my family when I was 9 years old. I am currently living in the suburbs of Århus, with my two children…
END_OF_DOCUMENT_TOKEN_TO_BE_REPLACED
Categories INSPIRATION

Posted on April 20, 2021April 20, 2021by Miro Maršík
Miro Maršík, music composer and producer, started using his images as covers for his music. Photography quickly became a passion, and with his X-T4, he captures wonderful landscap…
END_OF_DOCUMENT_TOKEN_TO_BE_REPLACED
Categories INSPIRATION

Posted on April 15, 2021April 15, 2021by Alwin Kok
First of all, I would like to thank Mr. Keitaro So, Divisional Head of Fujifilm for providing the loan for X-S10 and XF18mm F1.4. The units were loaned from Fujifilm Asia Pacific …
END_OF_DOCUMENT_TOKEN_TO_BE_REPLACED
Categories INSPIRATION

Posted on April 6, 2021April 6, 2021by Anh Vu Nguyen
My name is Anh Vu Nguyen, and I'm a 27-year-old mechanical/industrial engineer. I grew up and currently live in Pilsen, Czech Republic. As a second-generation immigrant from Vietn…
END_OF_DOCUMENT_TOKEN_TO_BE_REPLACED