My entry into the world of infrared photography was through trial and error, with an emphasis on error. I wanted to give this form of photography a try, and in the beginning, that’s all I really knew. My first attempt was by way of a filter, and my first lesson was to NOT buy a $10 filter on eBay.

I had no idea certain lenses failed to produce anything usable. I was unaware I’d need to rethink my approach to light, contrast and post-production all together. No matter the learning curve, my love for black and white photography would compel me to make it work.

I was already using a Fujifilm X-T20 when I saw a used version of the same camera for sale online. Its sensor had already been converted to infrared. “Heavy abrasion around the tripod mount” the ad said. “No problem” I said. Already acquainted with the settings of this model, I figured I’d be prepared to start playing with my new scientific toy. I was wrong.

I quickly learned the hard way about hot spots, how certain lenses had a whitish burn in the center of the frame. To remedy this, I began testing all of my lenses, and researching which lenses worked best for IR photography. Luckily, I already owned a few vintage Konica lenses for my existing Fuji system. In its heyday, Konica was one of few companies producing IR film stocks, so no hot spots on most of their glass.

My next hurdle was discovering when to use the camera. When light is “bad”: when it’s the middle of the day, it’s wildly bright outside, or there are big puffy clouds, that’s when this camera shines its brightest. When most people are saying things like “I’ll wait until golden hour,” or “too bad the light is so harsh,” that’s when IR seems to work best for me.

At first, the files from my new sensor appeared dull, soft, and gray. By overcompensating my editing sliders and dragging them further than ever before, I was able to correct the issue to my liking. These settings, which would make almost any regular color image look ridiculous, were making my IR images look much better.

It wasn’t long until I began to notice what could be done with the use of ultra-wide-angle lenses. I shot a few B-roll wedding photos with the XF 16mm f/1.4, and I couldn’t believe the textural surrealness when processing those pictures. Next, using the Laowa 9mm f/2.8, I shot some videos of my friends skateboarding.

It was a strange, but visually pleasing look that I hadn’t seen before. I was drowning in new information and sticking my camera in the faces everyone I knew to see what they looked like through my new eye.

I would like to share a few tips I’ve picked up along the way. I personally recommend that when shooting portraits, take a few extras of your subjects looking at each other, or looking off in the distance, rather than directly at the camera, as people’s own appearances can certainly be off-putting.

Next, when shooting most scenes, you’ll likely need to add quite a bit of contrast later, so meter for your shadows accordingly. Also, among other things, rainbows don’t show up correctly, tattoos appear more vibrant and punctual, veins can be seen through fair skin, and the light from a laser pointer is invisible.

I’d be remiss to not mention the “false color” aspect of infrared photography. Although popular, it’s frankly just not appealing to me. I enjoy the way this format creates black and white like no other.

I shoot the majority of my color images on film, or at least I try to if my wallet agrees. I still enjoy black and white with my normal X-T20, especially in those early morning hours. However, I’ve included one color infrared image just to showcase the possibilities.

I’ve found that this camera stays in my bag quite a bit, it’s certainly a special occasion rig, to say the least, but the patience and diligence certainly paid off. The way I look at scenery, compositions, and perspectives have changed drastically since the start of this venture.

Now, the skies, eyes, autumn leaves, trees, cemeteries, lights, abandonment, ivy, and decay, all look more ominous than I could have ever imagined. I have unlocked a realm where dark nights become darker, and oh yeah, greens become white.

I want to thank Fujifilm and Fuji X Passion Magazine for their continuous contributions to this community.

Posted on October 15, 2021October 14, 2021by fujixpassion
We hope everyone is doing well and with a huge desire to photograph. To help you with your inspiration, we've made the weekly selection of the best photos tagged @fujixpassion on …
END_OF_DOCUMENT_TOKEN_TO_BE_REPLACED
Categories INSPIRATION

Backpacking as a photography philosophy

Posted on October 22, 2021October 22, 2021by James Thornton
I imagine I am not alone in that it was a life event that really sparked this creative outlet for me. Nobody would have called me a particularly artistic child but something about…
END_OF_DOCUMENT_TOKEN_TO_BE_REPLACED
Categories INSPIRATION

Posted on October 19, 2021October 19, 2021by Jesse Yardley
In the mid ‘70s, my dad walked into a department store and, a few minutes later, walked out with a shiny new Argus TTL 35mm SLR camera. It wasn’t an expensive camera, but it did h…
END_OF_DOCUMENT_TOKEN_TO_BE_REPLACED
Categories INSPIRATION 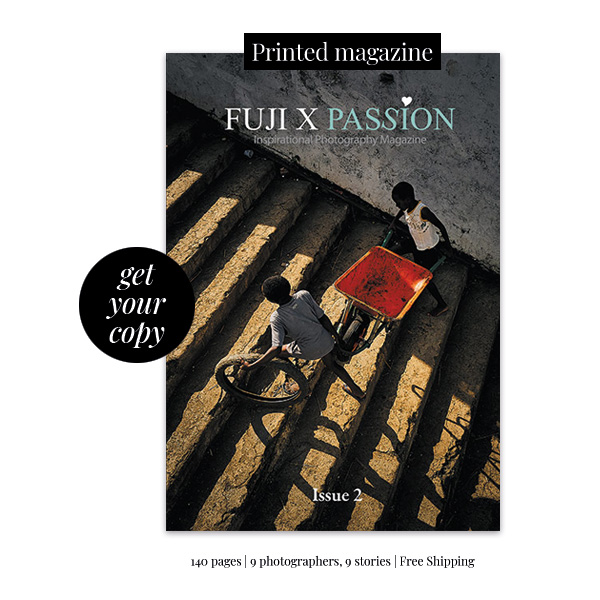