It’s been a little over a year since I switched to using the Fuji X System and one of the many things I still love is how small and lightweight the system is, and of course a small, light camera and lenses means that other equipment can also become smaller and lighter too.

Like many landscape photographers I’ve gone through my fair share of backpacks since I started, and one of the main criteria has always been that I want the bag to be as small as it can possibly be and still fit my needs. When I’m out on a landscape shoot my kit typically consists of an X-T1, the 10-24mm and 55-200mm lenses, a couple of spare batteries, three filters, a cable release and a tripod. Additionally I’ll have a bottle of water and some kind of outer shell for if the weather changes, along with a head torch, a fruit bar or two and wallet, keys and phone. When I’m travelling I tend to use a Lowepro Photosport 200, which I’ve reviewed on my blog, and while it’s a great bag it’s still larger than I need to carry the dayhike kit I outlined above. So, when I switched to Fuji I started to look for the smallest backpack I could find but pretty much anything smaller than the Photosport doesn’t have hip straps, which for me are vitally important as I like to get the weight off my shoulders as much as possible. Then it occurred to me, if I wanted a small bag where I could carry the weight on my hips, why not just look at waist packs? I’d always ruled them out before as they are not really effective for carrying a full frame dSLR kit, even if it’s only two lenses, but for the Fuji system it’s a different matter altogether, so I started to look at what was available.

Pretty soon I came across the Lowepro Inverse 100, and right away it looked to be ideal. I ordered one and as soon as it arrived and I started putting my kit in it, I knew it would be absolutely perfect. It was almost a “eureka” moment…”why had I never thought of waist packs before?” (well, obviously because I’d never have been able to fit a D800 and a couple of lenses in there, let alone a tripod). If you’ve ever thought of waist packs before and then disregarded them, then think again. They are ideal for landscape photography with a mirrorless camera.

First of all I can fit all the kit I described above in it easily. The bag is split into 3 sections, and the X-T1 fits comfortably into the centre section with either lens attached. There’s plenty of room in one of the other sections for another lens, and you could easily fit a third lens in the remaining section if you’re willing to forego some of the other items I generally take. In that third section I generally put the spare batteries, head torch, fruit bar, phone, wallet and keys. There’s a front pocket where I put the cable release, filter holder and lens cleaning clothes, and then there’s a section between the main body of the bag and the front pocket which is perfect for my filters. On either end of the bag there are two pockets, one that carries a water bottle, and the other where I put a rain or wind shell. Finally, beneath the bag there are a couple of straps where I can secure a Gitzo traveller tripod (which I’ll talk about below). 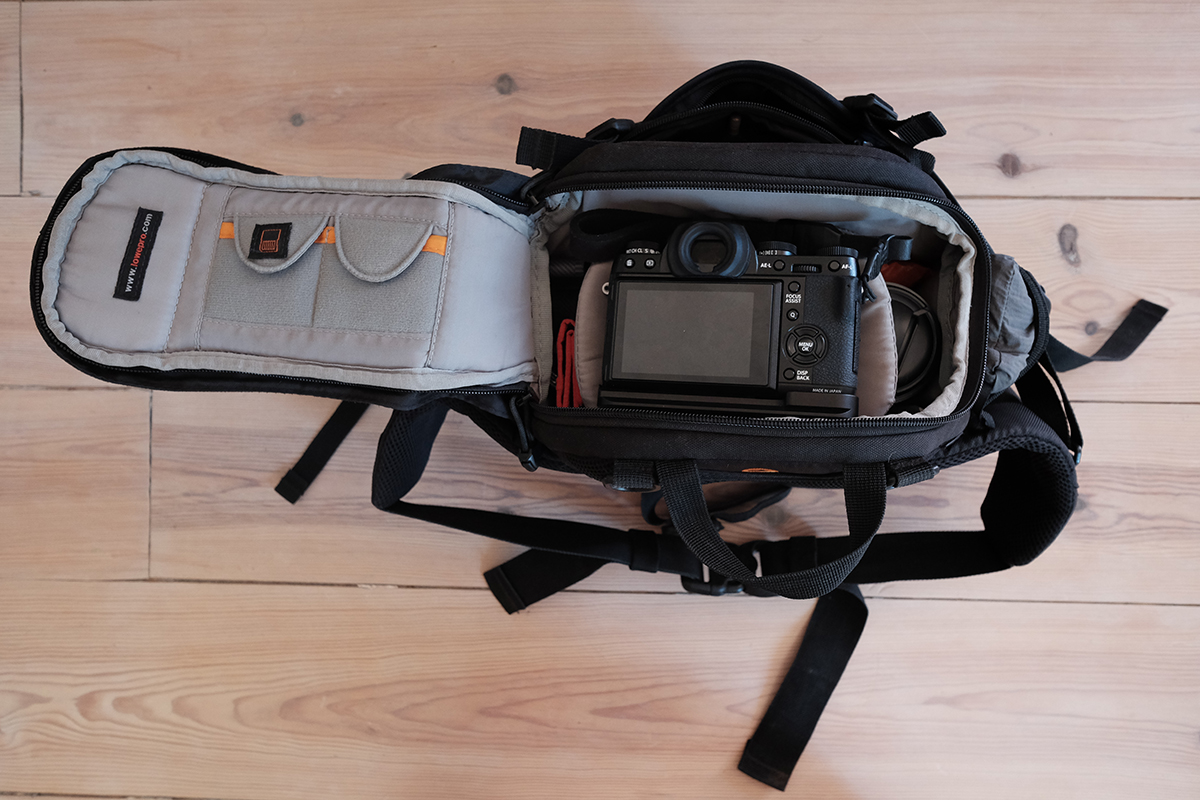 While this amount of kit generally isn’t particularly heavy (I weighed the bag at 6kg with all the equipment described above included in a litre of water), carrying it like this strapped around the waist makes it practically effortless. All that weight is on the hips, leaving the back and shoulders completely free. I’ve been using this set up since the beginning of the year and have done some very long hikes and some steep climbs up cliffs and found it to be a really great bag. I barely know it’s there even after hours carrying it.

Another advantage of the waist pack is that when I’m at the location I can twist it around to my front and work from it without putting it down. I can access different lenses, filters, cleaning cloths…pretty much everything in the bag without moving away from the camera and without having to put the bag down. This is particularly useful for working in places where I’m standing in water, like at the beach or in a river.

The Inverse is every bit as durable as a regular backpack, it comes with a rain cover, and the straps and zip are really strong, making the bag and it’s contents feel really secure. It’s just the perfect solution for landscapes with a small kit.

When it comes to tripods, I’ve also been able to shave off a lot of size and weight since switching to the Fuji system. Previously I used a Gitzo Mountaineer Series 2 with a small Gitzo ball head, which was a pretty light setup at 1.8kg but strong enough to comfortably support a Nikon D3 and 80-400mm lens. With the Fuji X-T1 I simply don’t need that level of support, so I switched to the Gitzo Traveller Series 1 with a Really Right Stuff Ultra Light ball head, which weighs a little over 1.1kg but easily supports the camera and any lens I use with it.

It also folds down to around 42cm long, which makes it incredibly easy to pack in luggage, but also means it can be attached to the Lowepro Inverse waist pack without sticking out sideways too much. 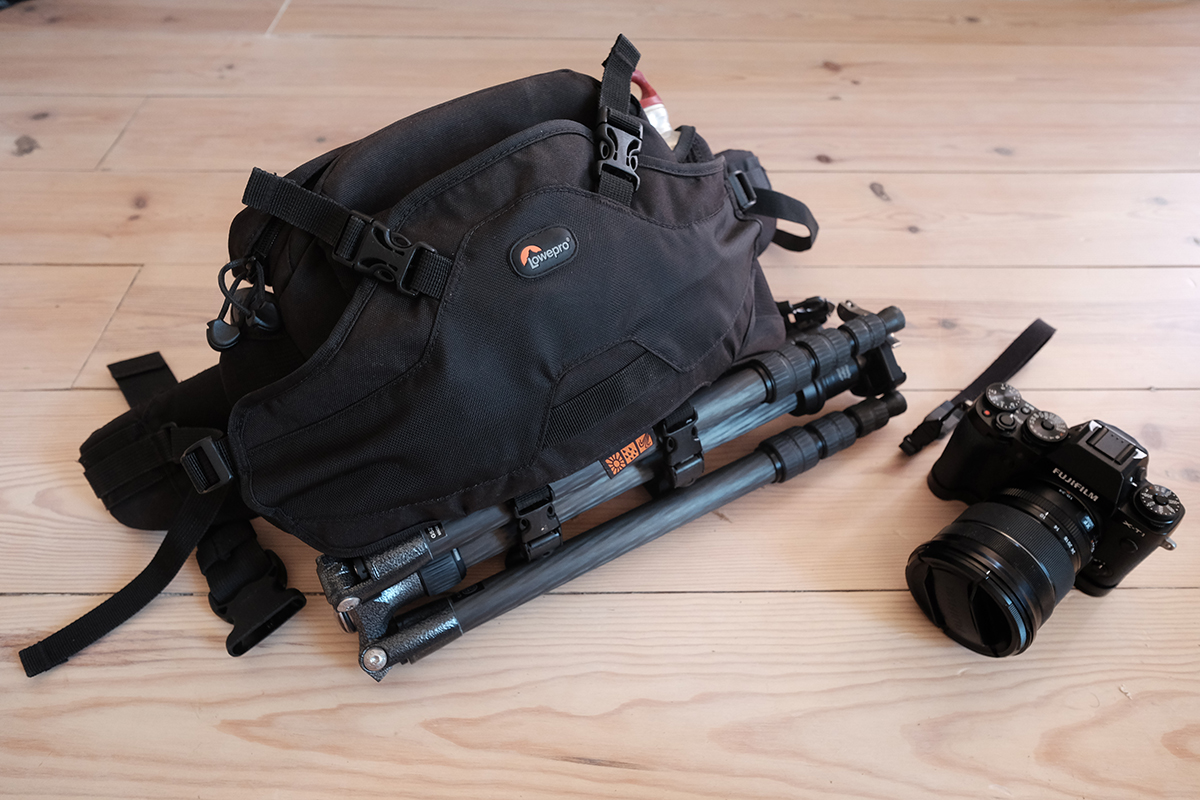 Of course, the one thing you lose with such a short tripod is height when fully extended, but with the X System I don’t really find this to be a problem as I can flip out the LCD screen which saves me from having to bend down to look through the viewfinder.

The Really Right Stuff ball head has an Arca Swiss style clamp and so connects perfectly to the grooved Arca Swiss compatible bottom of the Fuji Handgrip that I have on my X-T10 without the need for a separate base plate screwed to the bottom of the camera. On my X-T1 however I don’t use a grip, so for that camera I have a Really Right Stuff L Bracket. It’s a brilliant bracket, although when using it in portrait mode it’s impossible to open the door on the side of the camera where the cable release attaches. I’ve had to unscrew and remove the side part of the L bracket, which is a shame, although as the X-T2 has a threaded shutter for a cable release, this will no longer be a problem with the new camera. Another example of Fuji listening to feedback from their customers and X Photographers!

The final aspect of my photography kit are the filters. I use Lee filters and was hoping that when I switched to Fuji I’d be able to start using the smaller Lee Seven5 system, but sadly that’s not been the case. The 10-24mm lens has a filter diameter of 72mm, which is just 3mm smaller than the 75mm width of the filters. There’s just no way that they can be used at 10mm without the filter holder appearing in the corners of the frame, so I’ve had to stick with the larger 100mm wide filters. Fortunately, over the years I’ve cut back the number of filters I use to just 3. There’s a 6 stop for long exposures of the sea and clouds, a 2 stop for slowing down water in waterfalls, and a 2 stop graduated, which is great for reflections and holding back brightness in the sky. The dynamic range on the Fuji cameras is so good that unless I’m shooting straight into the light, I never need more than a 2 stop, and if I do shoot straight in the sun, then additional filters don’t really help and I prefer to shoot multiple frames to blend the exposure later in post production.

So overall this is a really lightweight landscape photography kit that covers pretty much all my needs for a day hike and is almost unnoticeable to carry for long periods of time, as well as being incredibly easy to access.