Hi, I’m Tyler Grae. I’m a twenty-four year old, unemployed portrait photographer from north New Jersey. To be honest, I almost decided not to write this at all. Writing seems like such a hard means of communication when compared to the interpretive nature of photography. It’s particularly why I’m a photographer and not a writer. The images I’ve collected over the last few years have made a more articulate and emotional journal than I could ever hope to express in writing.

Why do I do it? How do I do it? What does it mean? I don’t have a clue. When I make a portrait of someone it’s like they’re trying to share their whole story in a single moment. Or I’m trying to share my whole story? Sorry, I can’t remember which. The truth is, nobody’s saying anything. A portrait captures a feeling with a bunch of shades of gray that doesn’t actually mean much. It’s just a nice way of expressing how I feel without ever having to talk about it. It says everything and nothing all at once.

When I started, I did it hoping that it might turn into a career. That was probably before I actually started to enjoy it – before I realized that it was paying itself off in satisfaction. The approval of some strangers money isn’t something I believe I’ll ever reach for. Even the word “approval” puts a bad taste in my mouth. I’m selfish about my photography and I’m not ashamed to admit it.

Around the time my mother gave me her old Rolleiflex was when I started enjoying the process. Looking through a waist level viewfinder for the first time was awesome. I wasn’t really aware how simply that beautiful photography could be made until I picked up that camera. All I needed was a quality film stock, a subject to photograph and the ability to see pretty light. It slowed me down and made me a more deliberate photographer. The bare-bones approach even made every session feel a little bit romantic. I sold the Canon DSLR I was using shortly after I started using the Rollei. If I could afford it I’d only shoot film. Unfortunately, I can’t and my Fuji X-E2 is the next best thing, as far as I’m concerned. It never gets in my way and it’s just fun to hold. I slap a VSCO film preset on my images in Lightroom and call it a day.

I’m not often interested in taking a photo without a person in it. I’m not sure why but it’s always been that way. People are fun to look at sometimes, I guess. Haven’t you ever seen someone that you wanted to keep looking at? I feel that way all the time. As a photographer I get to pose them, take a photo and then look at them a little longer. Visually I’m just drawn to people and I don’t think there’s a real reason for it. I’m always looking for new people to shoot and the best people to shoot are the ones that emote how I’m feeling at that moment. If the image doesn’t say anything about me then what’s the point? At the end of the day, every shot I take is about me and has almost nothing to do with my model.
In my opinion, natural light is the best light. Strobes and flashes take all the poetry out of it. Natural light in itself can be inspiring and I usually have to shoot as soon as it catches my eye. That spontaneity is part of my process and it usually comes at my sister’s expense when I interrupt whatever she’s doing so I can grab a shot. As a matter of fact, I’ve never photographed a professional model. All of my subjects are friends of mine – some more willing than others.

In shooting like this I’ve developed a style that I hope communicates, “less is more.” Connection and honesty make beautiful pictures not production value. A great location or a better camera isn’t going to make good photos. I think that’s important to understand about this artistic medium. I’ve always tried to make images that are honest with myself and I’m almost always satisfied with my results. If anyone else likes them, that’s cool too but it always starts and ends with me. 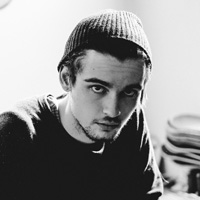 “Twenty-four year old self taught, poser photographer from New Jersey. I love shooting faces and almost strictly shoot natural light. It’s been roughly five years since I took up this artistic medium and I try not to take it too seriously. Also, I enjoy chain smoking cigarettes and consuming excessive amounts of coffee although recently I’ve been pretty into black tea.”

“Twenty-four year old self taught, poser photographer from New Jersey. I love shooting faces and almost strictly shoot natural light. It's been roughly five years since I took up this artistic medium and I try not to take it too seriously. Also, I enjoy chain smoking cigarettes and consuming excessive amounts of coffee although recently I've been pretty into black tea.”

Posted on July 28, 2020July 28, 2020by Pavel Rybníček
Originally published in 2018 on the 21st edition of our monthly magazine, this interview with Pavel Rybníček debates his work as a portrait photographer, the switch to Fuji and wh…
END_OF_DOCUMENT_TOKEN_TO_BE_REPLACED
Categories INSPIRATION

Posted on July 9, 2020July 8, 2020by Alwin Kok
Before having a Fujifilm camera in my arsenal, little did I know that "colour" actually plays an important role in my photography life, and that is motivating me to shoot. Why do …
END_OF_DOCUMENT_TOKEN_TO_BE_REPLACED
Categories INSPIRATION

Posted on July 4, 2020July 3, 2020by Thomas John
Currently, I happen to have both these cameras at home so I thought this is a good opportunity to do a small comparison – between the first and the current incarnation of Fuji’s E…
END_OF_DOCUMENT_TOKEN_TO_BE_REPLACED
Categories INSPIRATION

Posted on July 20, 2020July 20, 2020by Tarik Ahmet
As a street photographer I feel a sense of duty to document the world as I see it and how it constantly evolves by the day. However, what I never expected to see in my lifetime wa…
END_OF_DOCUMENT_TOKEN_TO_BE_REPLACED