Thoughts on the Fuji X-T2 for Video

I recently went on a trip to Canada and really got to put the Fujifilm X-T2 through it’s paces. I’ve played around with the video before but I feel like this trip was my first, real, intensive test of my X-T2’s video capabilities. Prior to this, I had a Panasonic GH3 (that I used exclusively for video work. I used an X-T1 for my photography), which I had sold when I got the X-T2. The following is a collection of thoughts I had regarding using the Fujifilm X-T2 for video work:

In my opinion, the video files look fantastic. Especially when viewing in 4k on a 4k display. I probably only used the Vertical Booster Grip for about half the shots.

I thought I wanted a firmware that added F-LOG internal recording. Now I don’t care as much. Sometimes it’s nice not worrying about having to grade too much. And if you record in a log profile in 4:2:0 I feel like you wouldn’t be able to push the image too much before you started getting banding and the image falls apart. Of course if they added it it’d be a nice option to have, but I don’t think it’s really necessary. But I’m no colorist, so maybe someone can correct me here.

Speaking of color, I barely touched the color of any of these files. The most I did was adjusting the color temperature in a few shots and add a bit of sharpening. That’s about it. The film simulations/color profiles built into the camera are amazing. I used the PRO Neg Standard color profile/film simulation in particular for this short video.

Most of these shots were handheld. I did add warp stabilizer to a few shots in post.

The X-T2 weather sealing, in my experience, is pretty rugged. Exhibit A (disclaimer – your individual mileage may vary!): 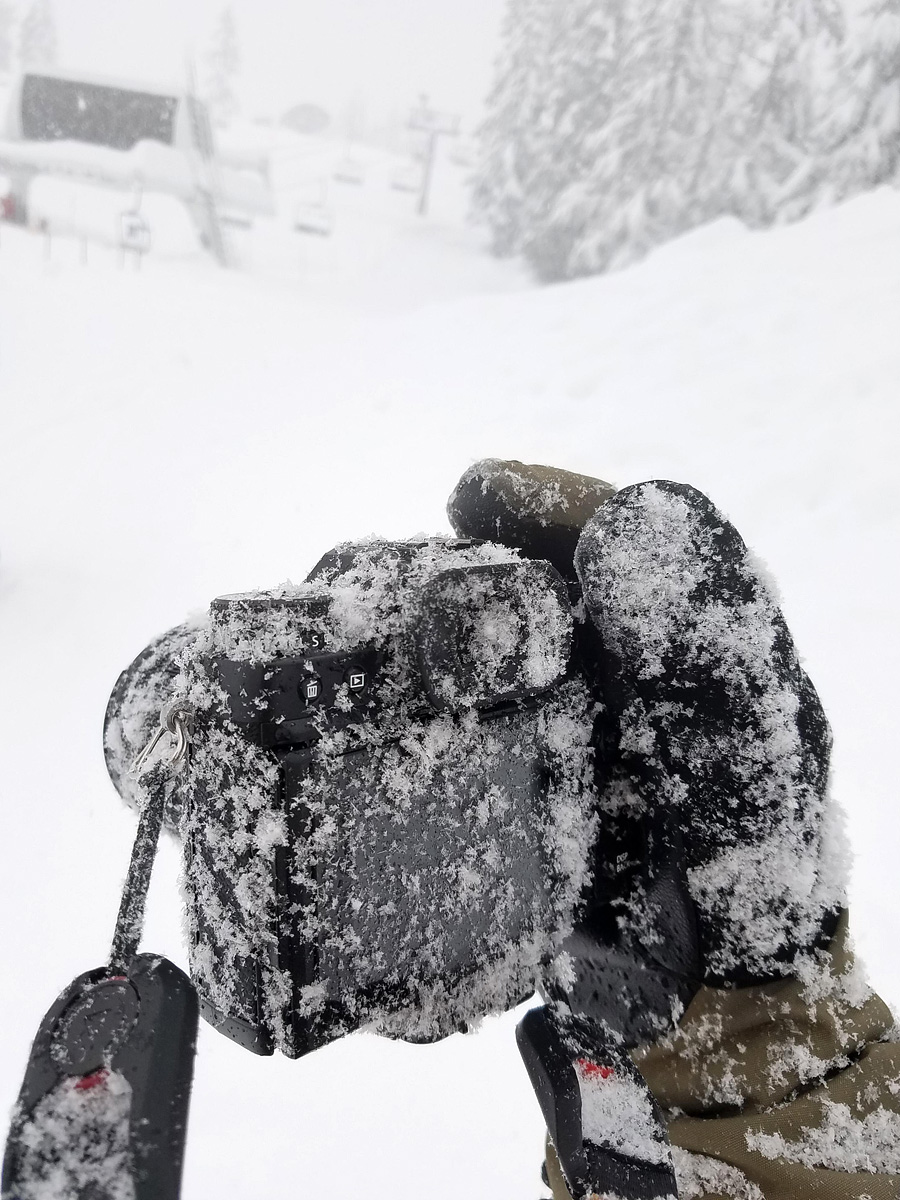 I tried using one Tiffen 77mm variable ND filter for both the XF18-55 and XF50-140 lenses, using adapter rings to fit the filter on the lenses. This was a mistake that led to missed shots. I’d try to swap lenses to get a certain shot, but then I’d have to unscrew the filter and put it on the other lens. By the time I had it ready, usually the opportunity was missed. I ended up buying another variable ND from The Camera Store in Calgary.

I would buy a Fuji XF18-55 f4 WR IS if they made it. The 16-55 2.8 WR looks great, but the IS is very nice to have when I don’t have a shoulder rig, which is most of the time. I take too many photos to usually ever want to use a shoulder rig. I generally tend to find it too cumbersome for me. I would even accept a larger/heavier lens if they could make a XF 16-55 f2.8 WR IS.

I’m actually not sure where the internal mic is on the X-T2. But it feels like I cover it up with my hands whenever I’m recording, as almost all my audio sounds muffled. Or the X-T2 internal mics are just that garbage. That’s also a possibility.

I wish the mic jack had it’s own, independent cover. I hated exposing all those plugs to the elements when all I wanted to do was plug in my Rode Videomic Pro. This led me to not use it very often. It kind of defeats the purpose of weather sealing in that regard.

The crop when shooting 4k was both a blessing and a curse. It was nice having a little extra crop when I was trying to record something far away. But it sucked trying to get a wide shot and not getting everything fit into the frame. Not a deal breaker, but worth noting.

I hate the fly by wire system of the Fuji lenses. It makes pulling focus/rack focus nearly impossible. Even the fly by wire focusing on my Panasonic 12-35 f2.8 seemed more bearable than this. I’ve heard the Fuji 23mm 1.4 and 16mm 1.4 both have pretty cool manual focus rings with hard stops (I don’t own these lenses, so I don’t know how well they work). That would be amazing if they could somehow incorporate it into all of their lenses. I know that likely won’t happen though.

Fuji shooters tend to naturally gravitate towards each other. A random guy walked up to me while in Capilano Suspension Bridge Park and asked if I was using a Fuji. Turns out he also had an X-T2 and we ended up talking shop for a few minutes. This would never happen when I had my Canon or even my Panasonic. Thinking back on it, I wish I got his name, seemed like a cool dude.

If anyone is wondering, the other cameras I used for this are the GoPro Hero 5 Black and DJI Mavic Pro. But probably 95% of the footage comes from my Fuji.

Alben Osaki is a US Navy veteran and graduate of the University of Hawai`i-Leeward College’s Television Production program. Since graduating, he’s worked in varying capacities for networks including Fox Sports, Time Warner/Spectrum, and The Lifestyle Network. He currently works in Honolulu, Hawaii as a freelance videographer and photographer. In his spare time, he enjoys pizza and writing about himself in the third person.