Earlier this month, I finally made up for a 20-plus-year missed opportunity: Seeing Metallica perform live. Long ago, the group performed in my hometown of Charleston, South Carolina, but this particular 7th grader was not allowed out that late on a school night. When I caught wind the band would stop by Seattle’s CenturyLink Field, I did two things immediately: 1. Buy tickets and 2. See if I could obtain photo credentials and turn this bit of wish fulfillment into a paying gig. After securing interest from a media outlet in Seattle Refined, I set about planning my gear and realized this would be an excellent test of my current photo arsenal: Fujifilm’s X-T2 and X100F. It was time to find out just how good these very different cameras were.

It’d been a while since my last big-name concert shoot — No Doubt in 2009 is probably the most recent if you don’t count a quick, Microsoft-funded Miley Cyrus concert. Since then, my camera gear has slimmed down considerably. Gone were the bulky Canon DSLRs and my L series zooms. In their place were the not-quite-as-bulky X-T2 and the diminutive X100F.

While my gear had changed. the pre-show wait followed the same rhythm — a mixture of photographers from various local, regional, and national outlets, each with their own gear and approaches. These major-label photo shoots generally limit your access at the edge of the stage to the first two or three songs, so there is plenty of time between acts for you to wait, or start processing your photos. It’s also a great time to take stock of your fellow photographers and see how they’ve approached the same event. Some brought portable footstools to see above tall areas of the stage. Some used a pro-level camera as their main shooter, and an entry-level model for backup. Others had special holsters for quickly accessing a selection of lenses.

By comparison, I kept my gear extremely simple: Just a 55-200mm lens on the X-T2 and the X100F’s fixed 23mm lens to handle the wide stuff. The only exception was my 10-24 ultrawide, which I slapped onto the X-T2 for one specific shot before switching back to the telephoto:

Other than that shot, I avoided the headache of juggling lenses. If the performers were keeping their distance, I relied on the X-T2 and my telephoto. And I had the X100F handy for when performers came close. Really, really close: 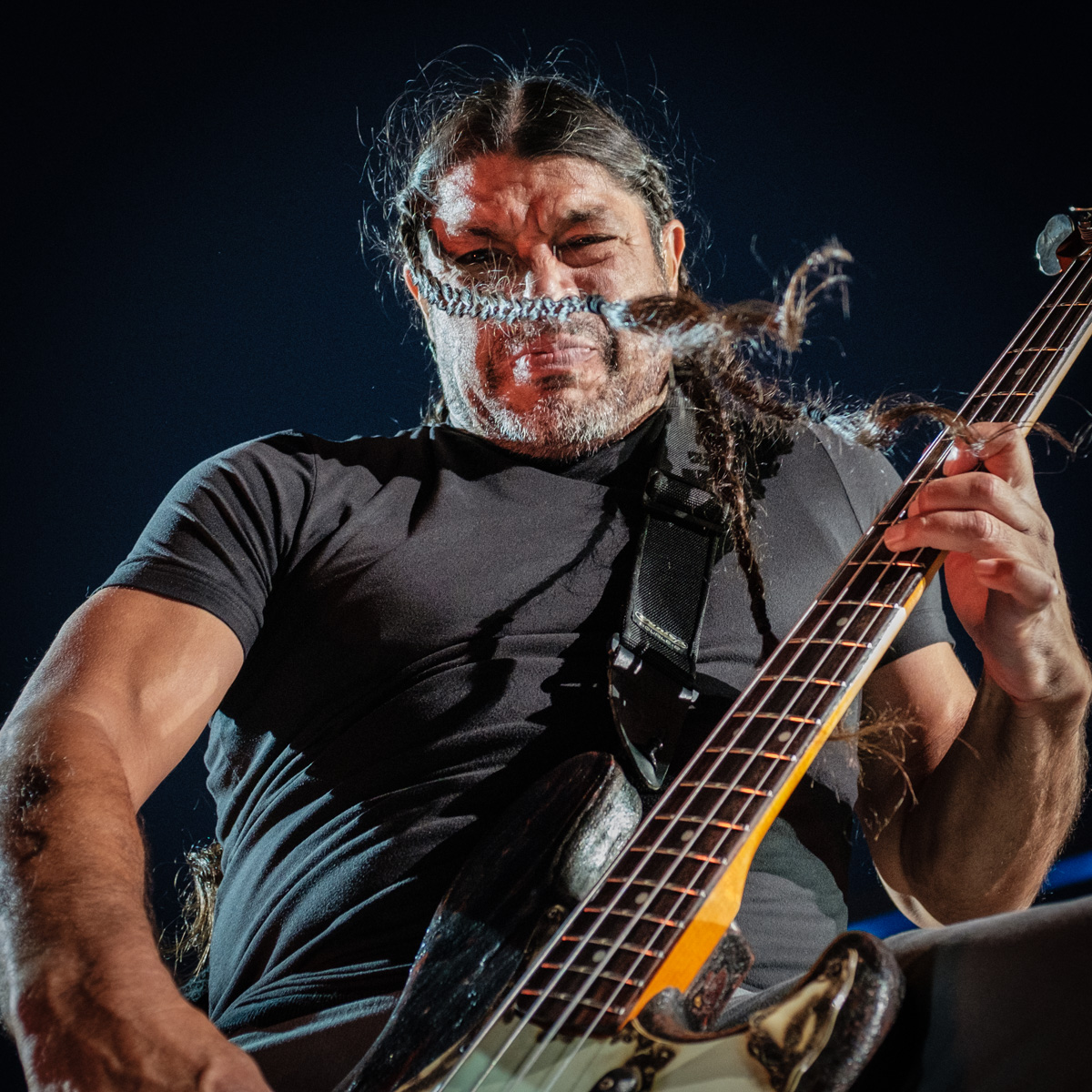 With the opening acts (Gojira and Avenged Sevenfold) starting things off in full daylight, I knew lighting levels would be constantly changing. Rather than try to adjust throughout, I just set my shutter speed to about 1/500 and my aperture to around f/4. With two-thirds of the “holy trinity” set, I let the Fujis determine whatever ISO levels it would need to maintain proper exposure. I trust these sensors well into ISO 6400 territory, so I wasn’t especially worried about seeing the ISO number creep ever higher as the night progressed.

One big reason for trusting the camera’s ISO judgment was so I could concentrate on, well, taking photos. With that in mind, I’m featuring some of my favorite shots from the concert along with the thought process that went into creating them. I hope you enjoy, and please let me know if you have any thoughts or comments! 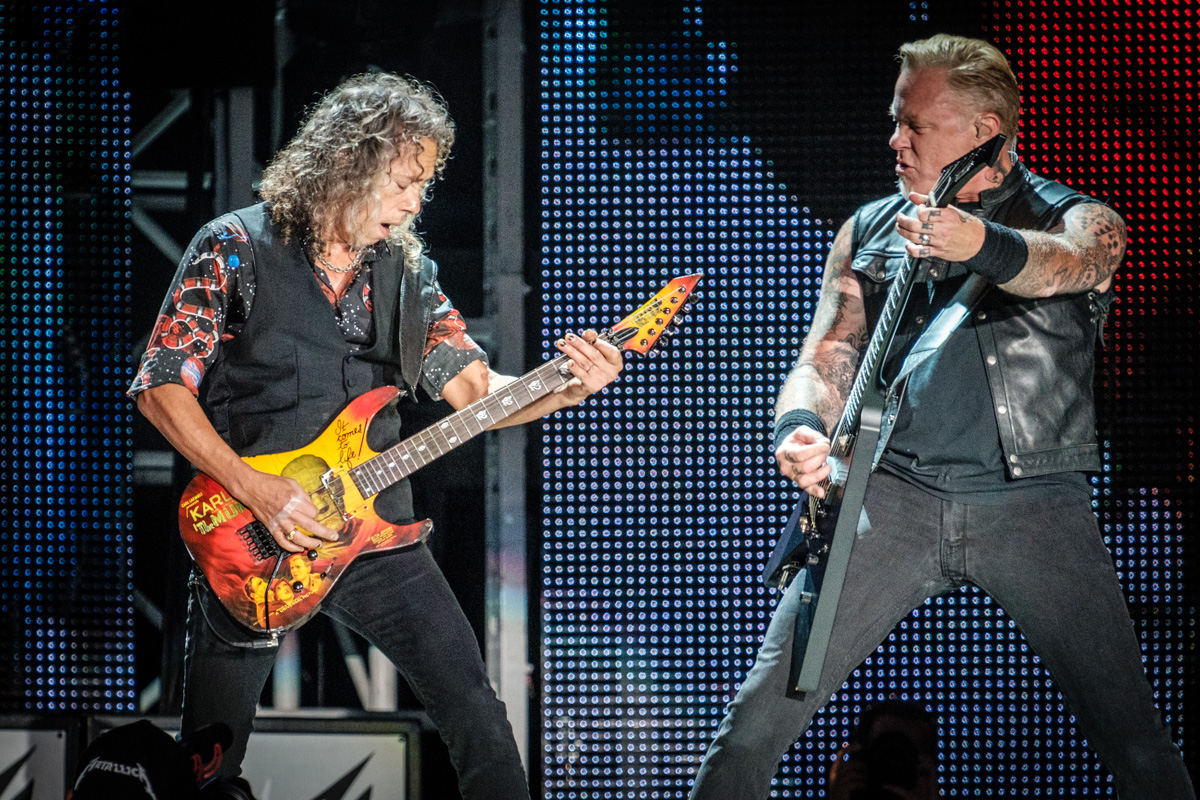 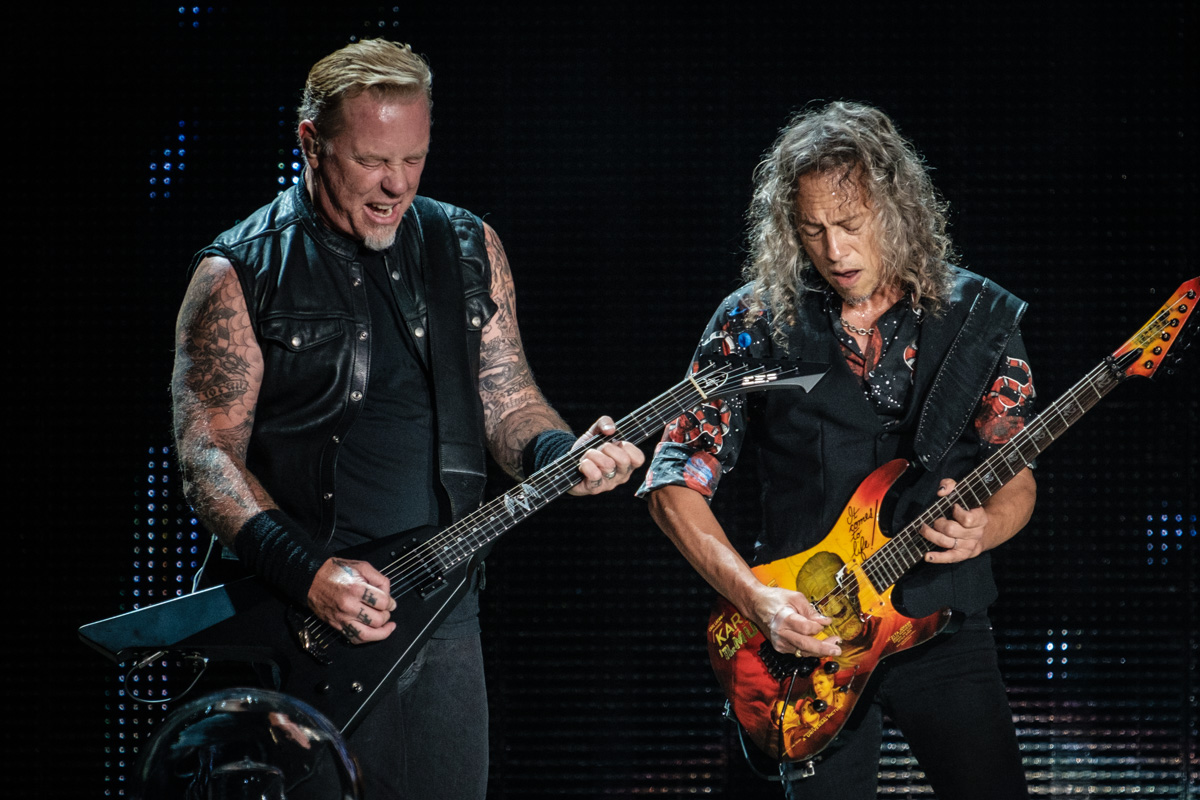 With such a limited window to shoot, it can definitely help to know a band’s songs and use that knowledge to predict what they’ll do on stage. In the case of the song “Atlas Rise,” James Hetfield and Kirk Hammett have a nice section of dueling guitar harmonies. And since Concert Theatrics Law states guitarists with dueling harmonies must stand right next to each other to visually emphasize there are two (count ’em!) guitar parts occurring at the same time, I knew to be on the lookout for a nice group shot. 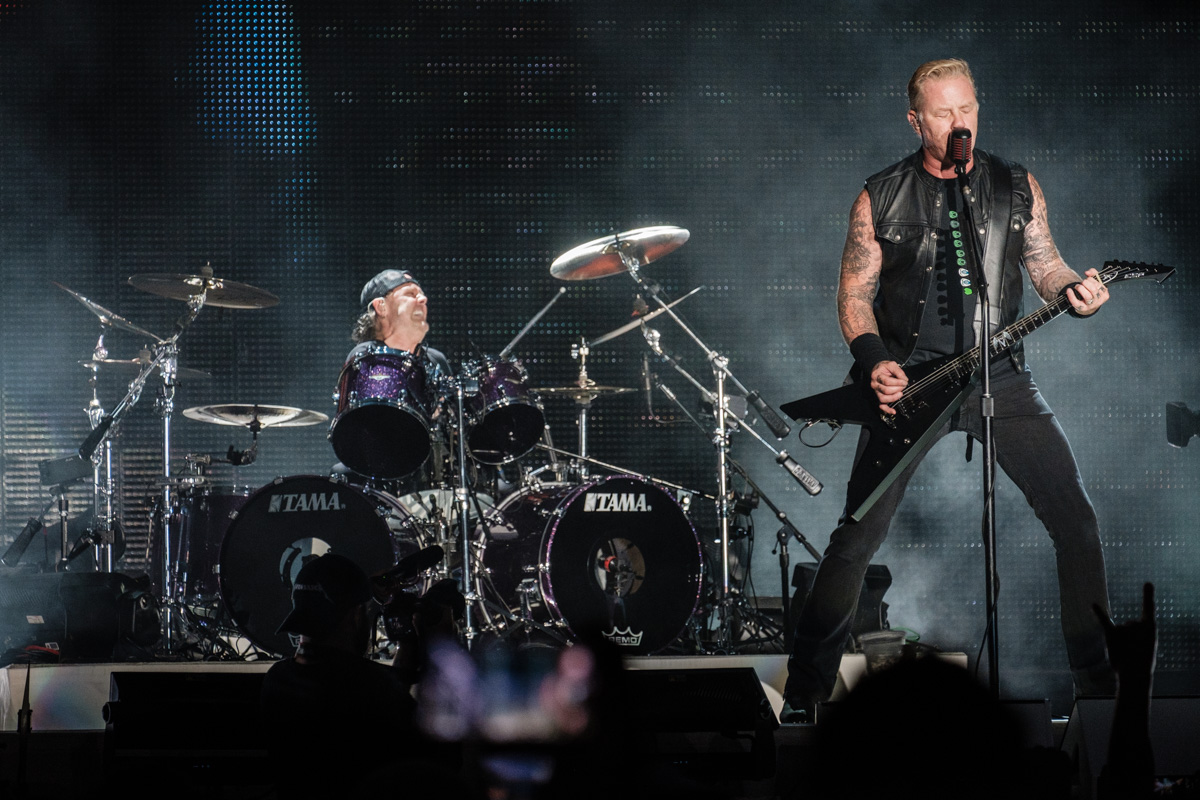 Depending on policies and the overall stage layout, you’ll have some room to explore while shooting. I managed to find a spot where the stage wasn’t too tall to shoot over (some sections forced me to shoot with my camera extended high overhead). Those dips in the stage also gave me the chance to position the center microphone just to the side of Lars Ulrich’s drums, leading to this group shot. 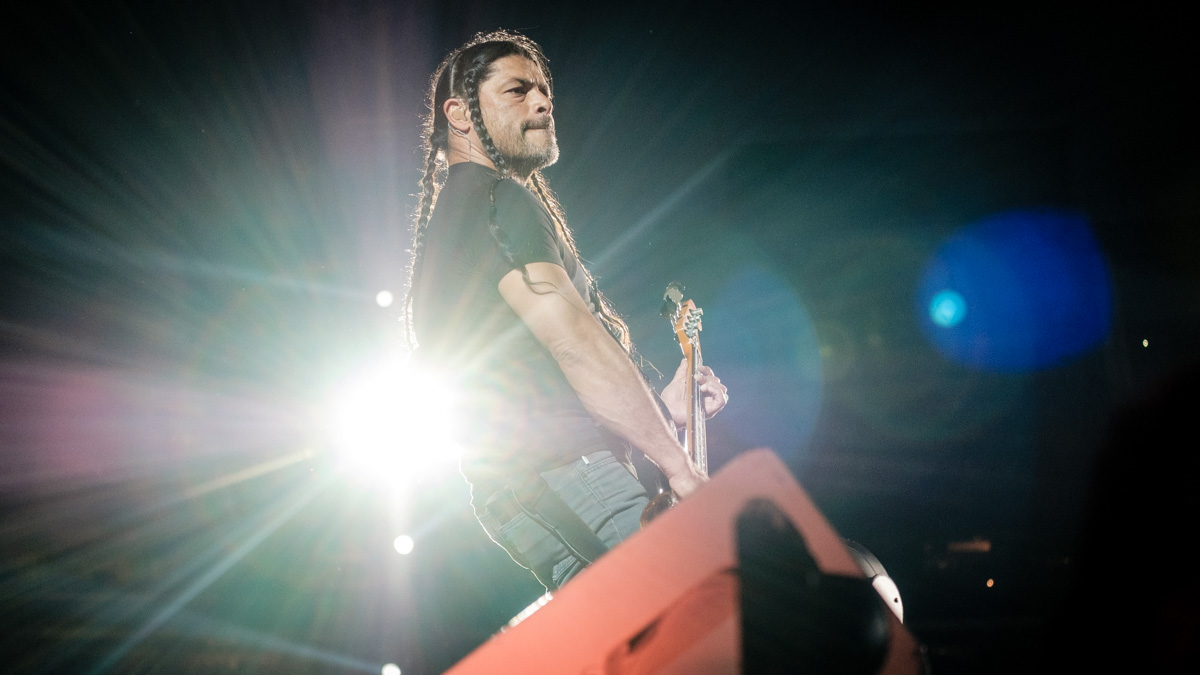 The stage lights are often constantly changing and it’s best to just roll with it. Sometimes, you’ll get some dramatic colorized shots and other times, you can position yourself so that lights themselves have a starring role in your shot. In this case, as Trujillo walked by, I actually increased the distance between us so I could get this intense light shining off of him for a J.J. Abrams-esque shot. 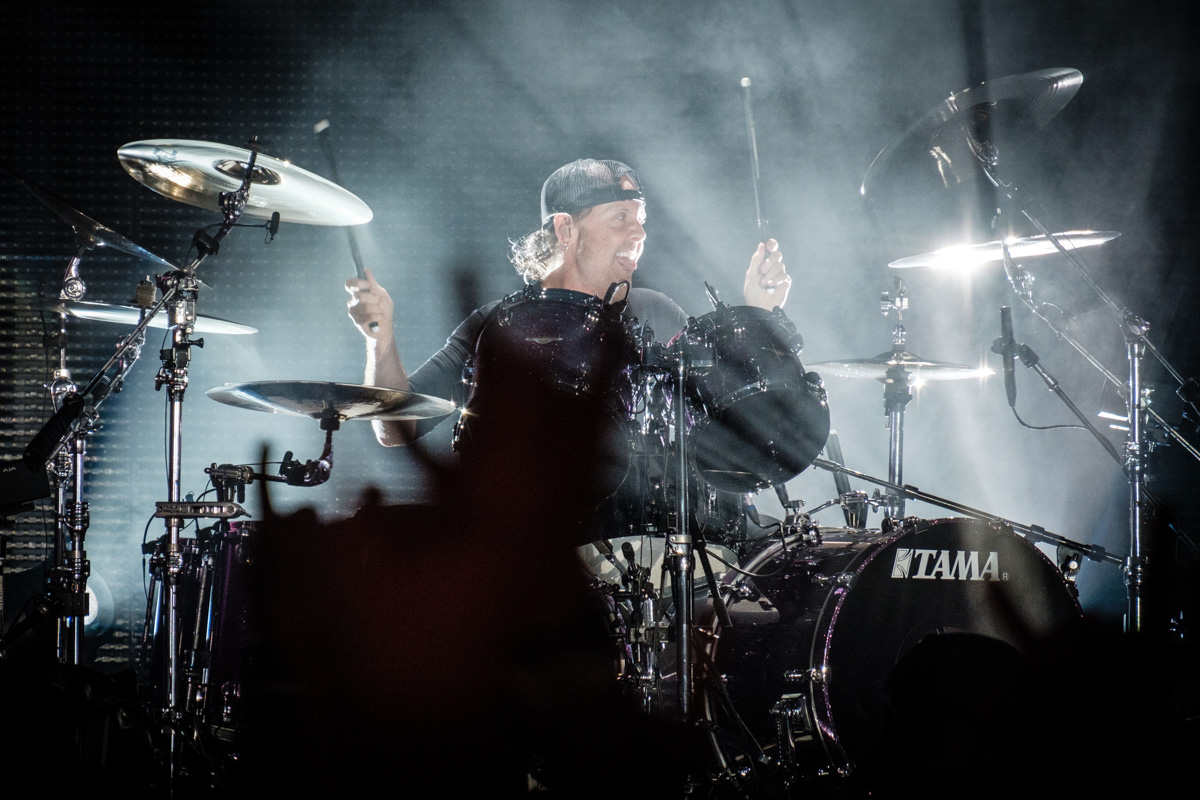 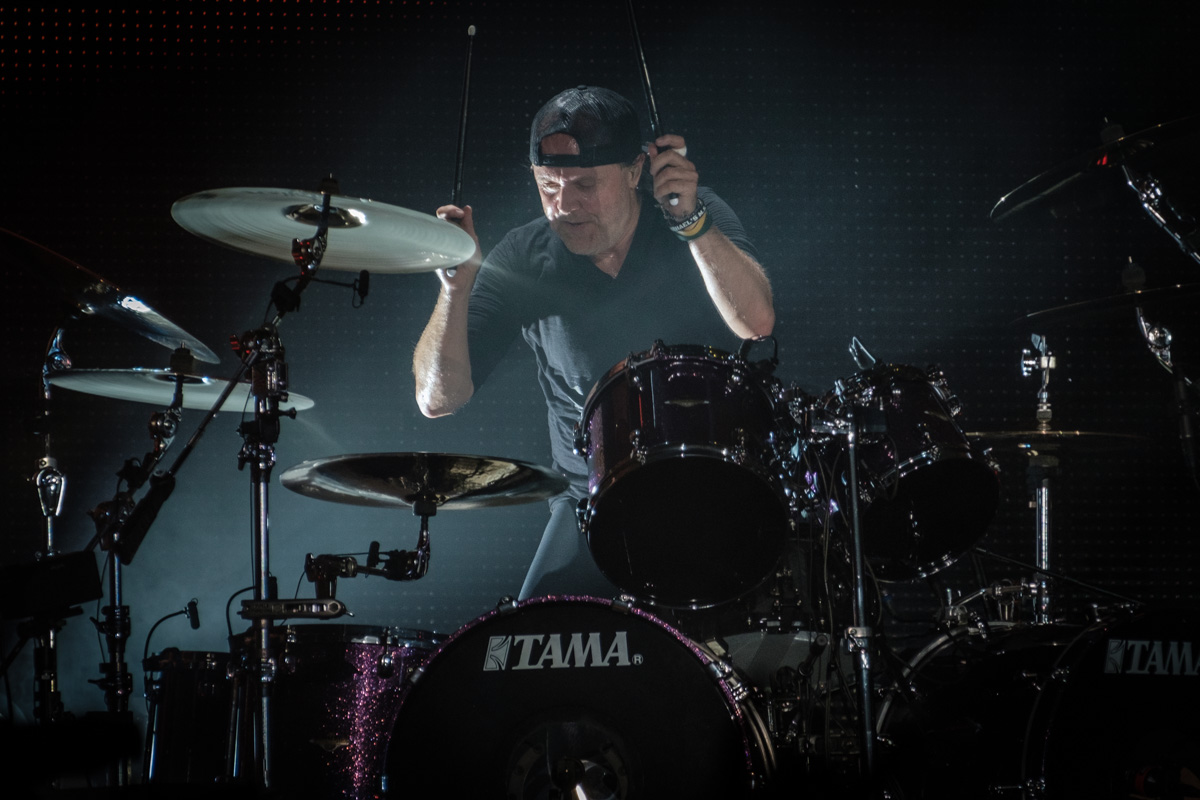 I’ve been memorizing drum parts since I was a kid, so I’ve developed a solid sense for when a drummer will stick to a single-cymbal hit and when they’ll opt for a more emphatic dual-cymbal exclamation point. A lot of drummers tend to keep their heads down for those smaller cymbal hits, but Lars loves playing to the crowd and will naturally sit up straighter, becoming more visible to the camera for these two-cymbal strikes. For even larger musical accents, he’ll actually get up from his drum throne. If you can time a shot for just before the cymbal impact, you can sometimes get a dramatic facial expression. 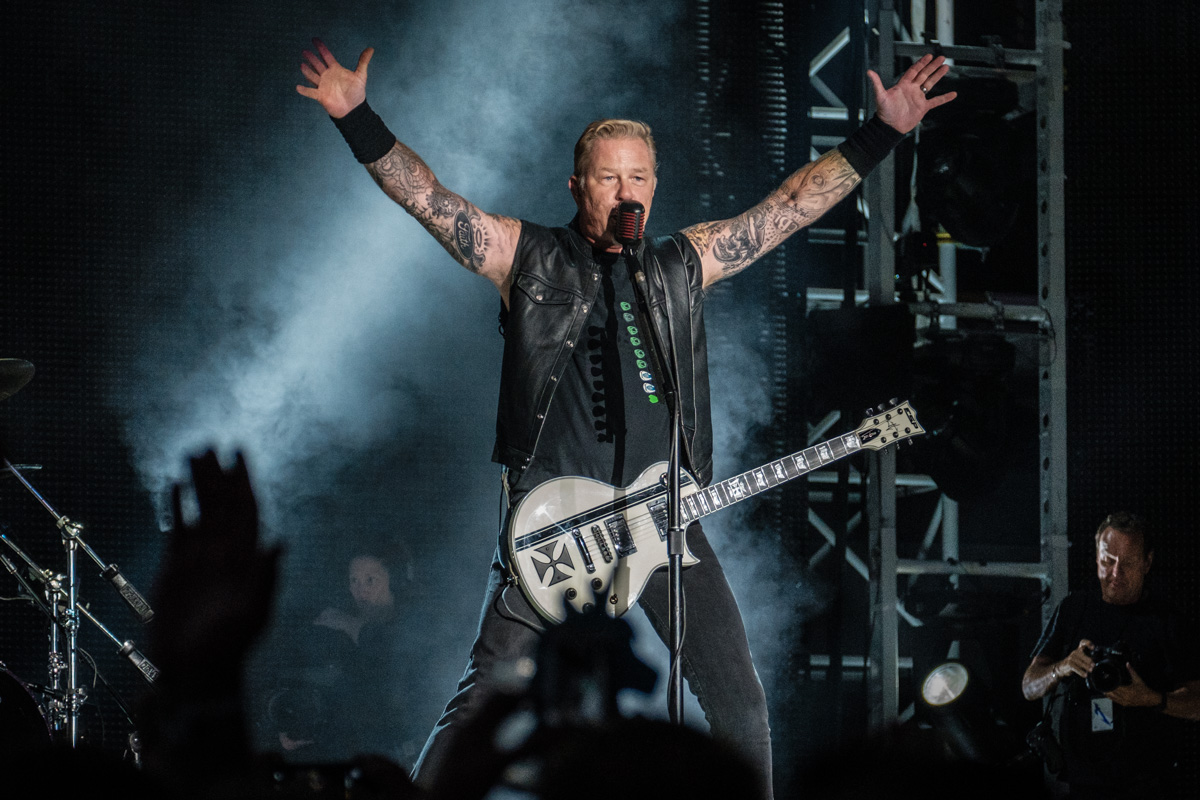 Don’t forget to keep shooting between songs, especially if band members take some time to talk to the crowd. They’ll likely be moving around less, and therefore easier to track, but still gesturing broadly for the fans. 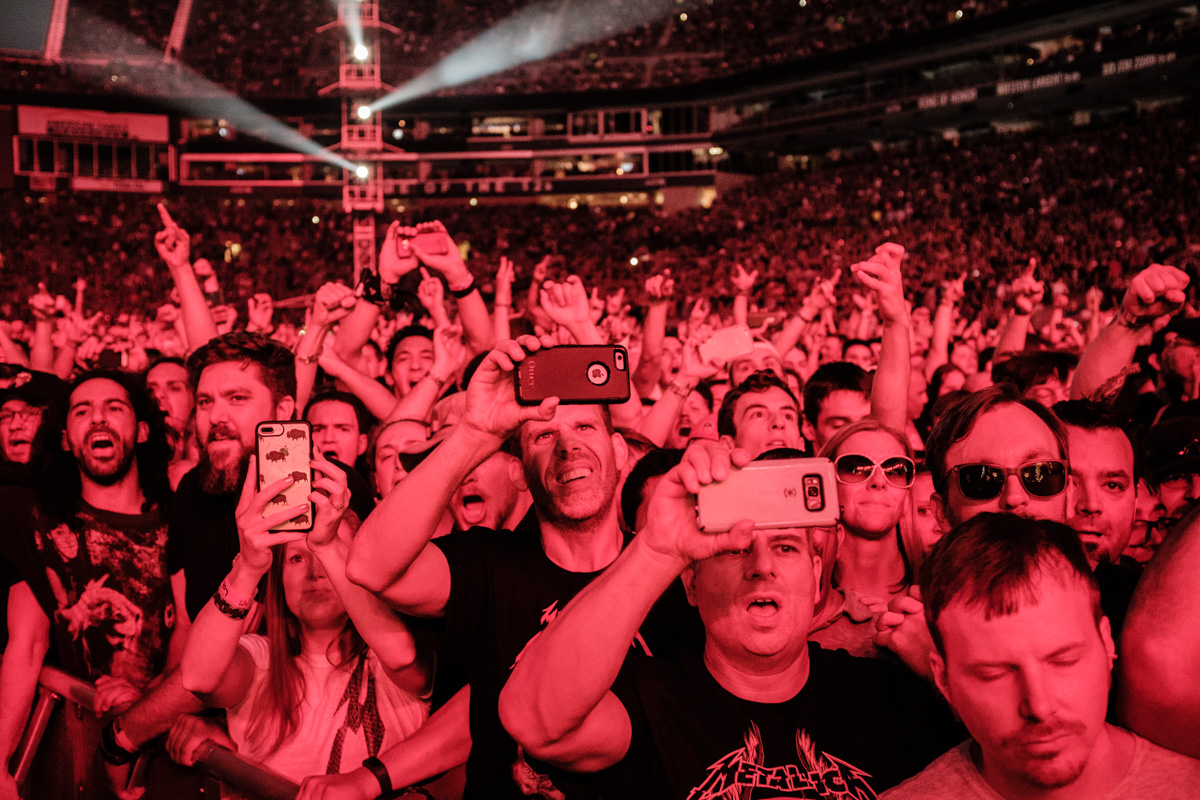 Lastly, don’t forget to turn around sometimes. Part of capturing a performance is documenting the fans out there to enjoy a band, or to Facebook Live a band, apparently.

Overall, I came away very happy with how my shots turned out. The constantly changing stage lighting gave the Fujis some autofocus challenges from time to time, but I never felt like I missed THE crucial shot due to slight focus hunting. They’re light and easy to handle in the field and the X100F proved more useful than I anticipated. I wouldn’t hesitate to bring these back to a concert stage in the future — though, hopefully I don’t have to wait another eight years!

Thanks for reading and big thanks again to Seattle Refined.

Philip Palermo is a freelance photographer and the Production Lead at Reviews.com. He’s also worked for Engadget, Big Think, The Unofficial Apple Weblog (TUAW), and several regional and local newspapers in the Puget Sound area.

philippalermo.wordpress.com/
Shooting in the real world with the Fujifilm GFX 50S Lisbon Street Photography Workshop With The Fuji X Series