Shooting in the real world with the Fujifilm GFX 50S

I have been using Hasselblad and Phase One medium format digital cameras for the best part of a decade. Being present for the unveiling of the new FUJIFILM GFX 50S at Photokina filled me with considerable hope that FUJIFILM would have come up with something special. I knew I had to stay grounded though, as it can be quite easy to get carried away in all the hype of a new product. Moreover, having been involved in the development of this camera for some time, I had an added ‘investment’ in the new camera. But would it live up to my expectations? For me, the moment of truth arrived over the Christmas holiday period. I was lucky enough to spend a couple of weeks using a pre-production prototype of the FUJIFILM GFX 50S, meaning I could really put this camera through its paces before the real deal was launched.

First Impressions
The first thing you notice is the weight – or should I say lack of it – and the camera’s DSLR type proportions. It was what stood out when I first handled the ‘finished’ pre-production bodies at Photokina. It is one thing to handle a camera in the controlled conditions of a booth, and quite another to use it in real world circumstances; yet it did not disappoint. It ‘slotted’ into my daily routine with no caveats whatsoever. Think of it as an upsized FUJIFILM XT2 and you won’t be so very far off.

Standout features which were not apparent on the pre-production samples at Photokina include the touchscreen LCD with its brilliant and intuitive ‘pinch to zoom’ on playback for its large LCD. Never has reviewing your shots been such satisfying child’s play. In fact it makes you wonder why so many other flagship cameras out there lack this feature, which many of us use so often in our daily lives on our smart phones. 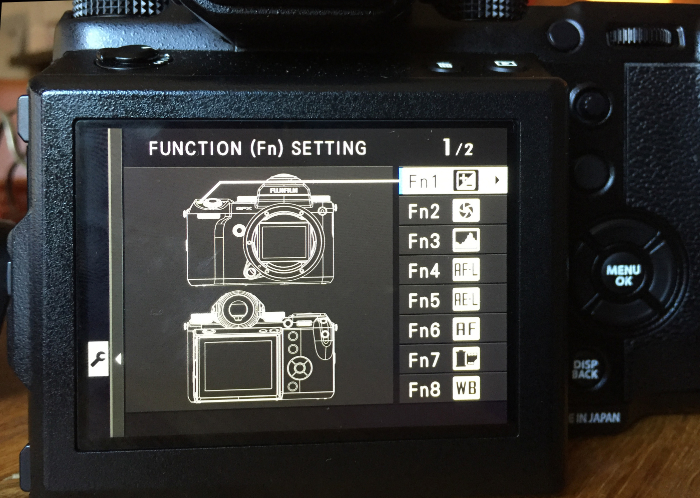 I also really like the way the camera info appears at the bottom of the LCD when you rotate the camera (just like the XT2). 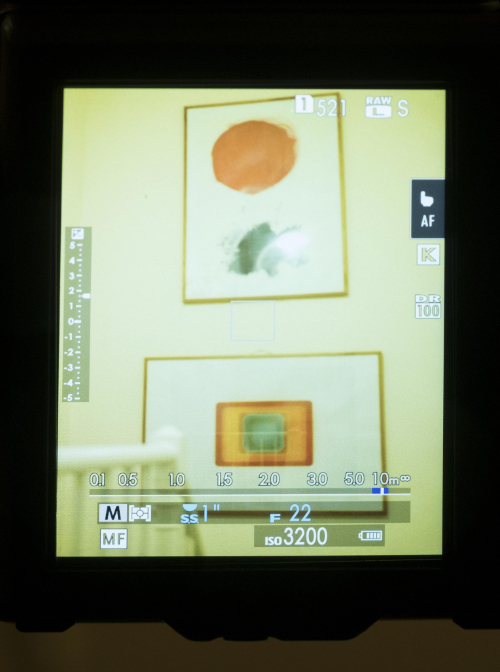 These details may seem to be just small ones but they speak volumes of how much care and passion FUJIFILM have put into the details which go into making this camera user friendly.

The joystick on the back of the camera is a dream to use and makes a simple task of moving the magnified focusing area around as you have your eye to the viewfinder – this makes focusing manually incredibly accurate.

The sensor may be 70% bigger than a full frame DSLR but its body size and weight is more in line with a DSLR and as a result will be an attractive option to top-end DSLR users who want to reach the pinnacle of photographic quality. It is worth noting though that this mirrorless medium format camera has achieved these targets without compromising on the everyday features which actually make a camera useable, notably it is very smooth to use with its impressive X Processor Pro and the liquid ink style LCD on the top plate of the camera which enables the user to see the settings of the camera (even if it is off) WITHOUT picking the camera up.

Though it is impossible to make any firm judgements regarding the AF on this pre-production camera with firmware (which was far from final) the AF in single shot mode I found to be very accurate and quick. The best I have experienced on any medium format camera.

The main event – Image Quality
The question everybody wants to know – just how good is the image quality? Over Christmas I was lucky enough to have the an early preproduction camera for two weeks and I used it on shoots which were relatively ‘real world’ – shoots which represented the type of photography I would undertake in my rather left field world

Firstly the ‘health warning’ – the camera is pre-production and not using final firmware and there is no raw processing as yet so the images you see are all JPG’s. Furthermore, a FUJIFILM representative told me that the camera I was using was running at ‘around 75 percent’ of what the camera is capable of. That said, the image quality is a long way ahead of any DSLR I have used in terms of detail and tonality, what is more, I feel it is at least as good as any medium format competitor I have used (I have not had the opportunity to shoot back to back yet though).

Firstly on Christmas eve ramblers in the Frome area may have seen some strange goings on down in the woods. While not being a full on ‘Forest’ shoot with exotic animals it had some of the key ingredients – smoke and big lights.

The point of interest this time was provided by volunteers from Bojangles Dance school of Frome. While the wild animals may have been absent we had most of the key elements which delivered much of the aesthetic of one of my forest shoots – with the GFX more than living up to the task. 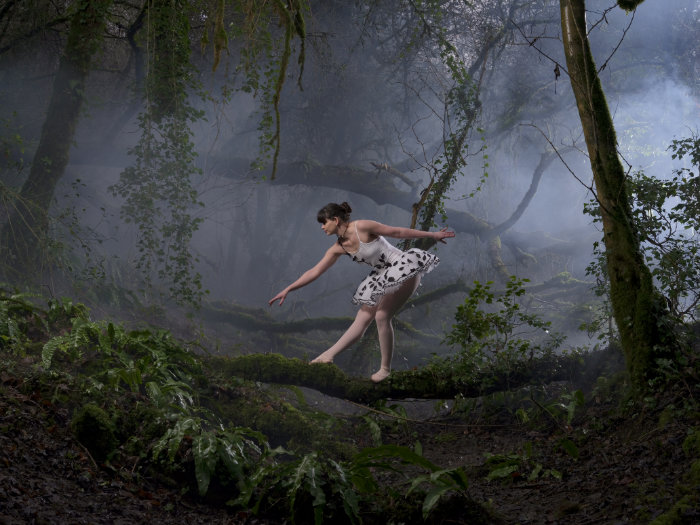 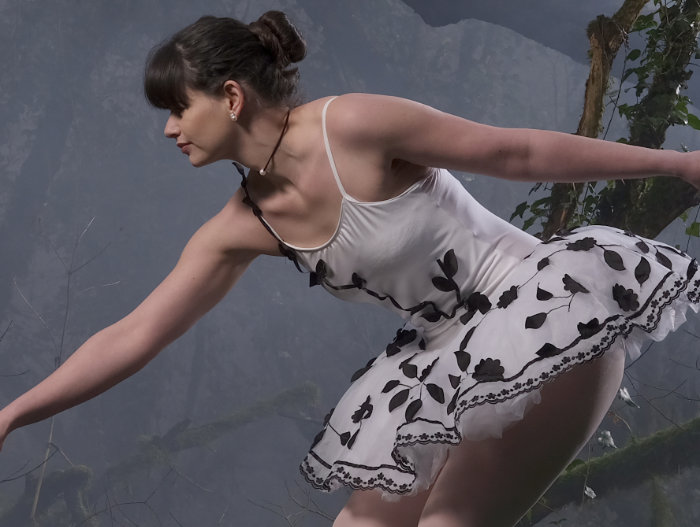 Even with the hottest property in the camera world in ones custody there is no avoiding Christmas but on the way back from the ‘in-laws’ we were treated to this stunning early morning view over the Cotswolds.

The longest focal lens I had was the 120mm macro lens which on the face of it really would not be suitable for a shot like this, and while it did not give me the deep tight details into the mist covered vale I did this stitch of 4 images and the resolution at 100 percent crop illustrates that the detail IS there and it is outstanding. 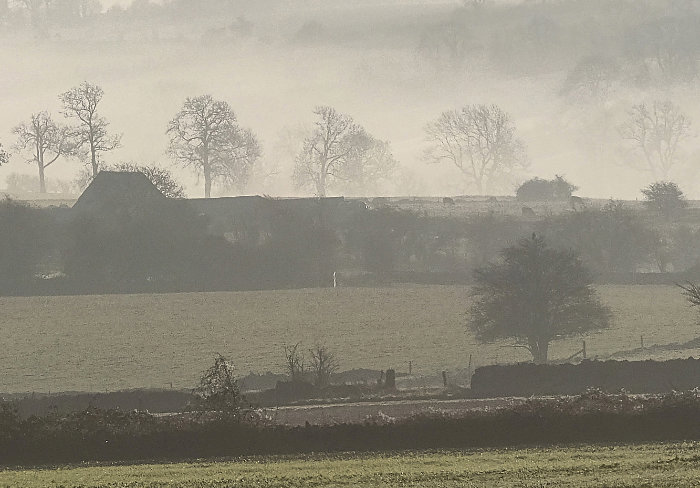 The 120mm macro is perhaps not the first choice for a landscape but perhaps its natural ‘habitat’ is in the food and product photography world. In Frome we have the internationally acclaimed artisan cake maker called ‘The Bakemonger’. 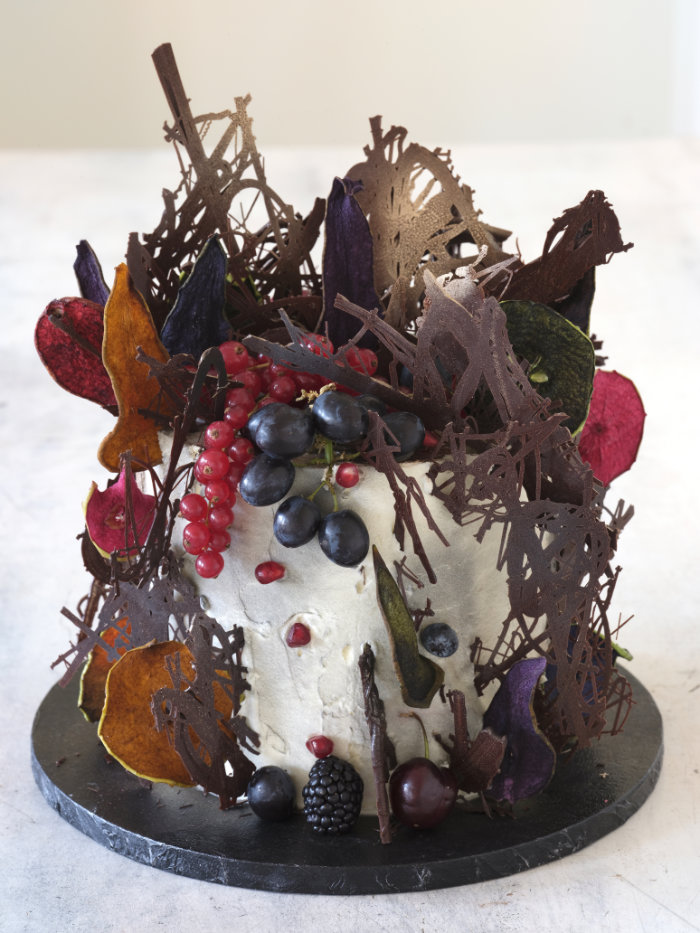 As you can see The Bakemonger creates the most stunning cakes – they almost look too good to eat, but they do taste as good as they look (and I’m not particularly a big fan of cake!).

Here again is a 100 percent crop of the image: 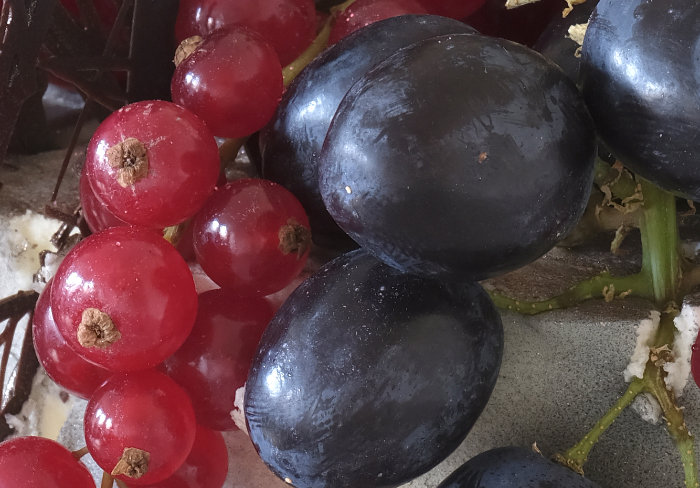 One does not tend to think of medium format cameras being used for time lapse but with a full 50mp of goodness to play and (with little to no noise at all) it does open up a world of possibilities allowing for big moves in and out of the footage, meaning that even though it was shot from a single viewpoint with the 120mm you can edit the video ‘dynamically’ giving a creative possibilities that just not possible with a DSLR – all at 3200ISO.

This time lapse is made of around 1000 images shot with the hand grip(which gives the camera a total of two batteries) at around 2 deg C. Notably the batteries held up for the whole time lapse without being changed which gives a good indication that they stand up pretty well.

For the ‘Big’ finish (the day before the day before I returned the camera) I took the GFX out onto a beach in Devon to shoot my good friend Jonathan Marshall on his his black stallion riding through the surf.

This was a particularly interesting shoot for a couple of different reasons, firstly it was quite cold – around 1deg C and the battery held up well and secondly though I started the shoot focusing manually with very good accuracy I switched to AF just to see how it would hold up and even though the AF works on contrast and the subject was predominantly black and into the light it coped remarkably well. 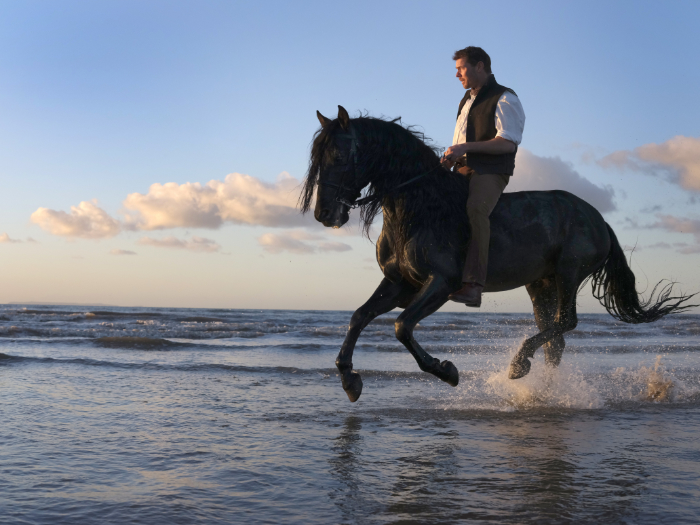 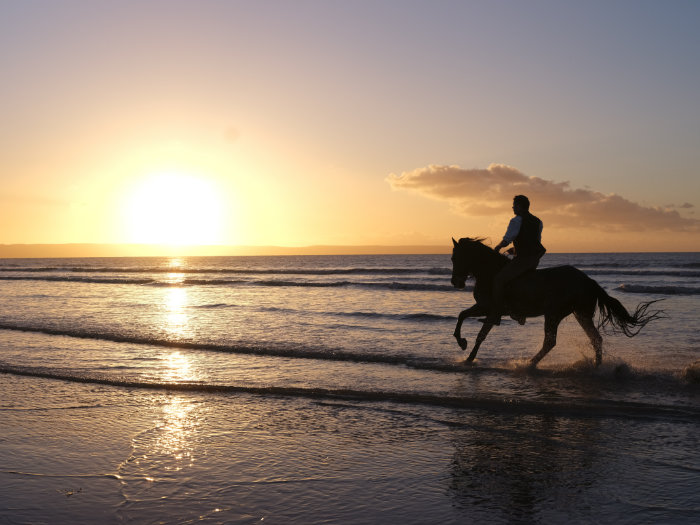 How is Fujifilm achieving this?
Of course FUJIFILM are using the FUJIFILM G format 43.8 x 32.9 CMOS sensor with 51.4 megapixels. FUJIFILM don’t just make cameras they make great lenses too – in fact if you have been using Hasselblad HC lenses you have been using them already and you possibly didn’t know it. I do not doubt that FUJIFILM has done an excellent job with the sensor but I suspect that a significant part of the camera’s performance is in no small part down to the superb lenses which are custom-built just for the GFX and are’ future proof’ and capable of resolving the 100mp.

So of course, the GFX delivers more detail than any other camera that you may have used previously, and it also has another party trick up its sleeve: it’s low light performance. Here is a still from Bristol docks time lapse: 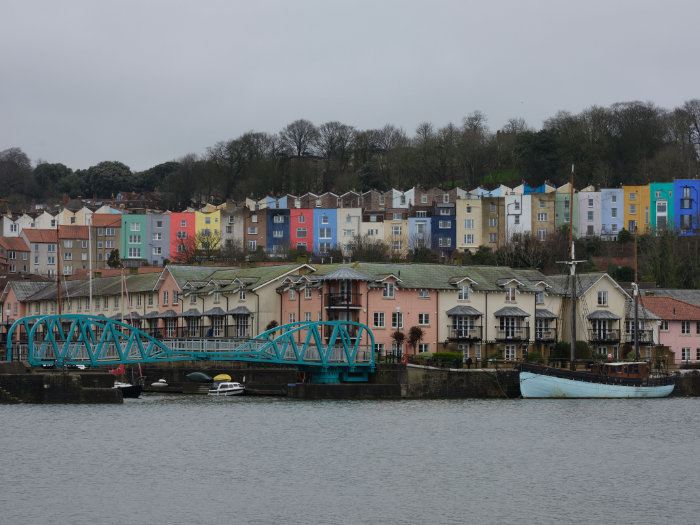 It will be interesting to do a direct comparison with its DSLR and medium format competitors, but I was surprised by how little noise there was. I can’t recall anything which is quite as creamy and detailed with such a lack of noise at 3200iso. This GFX beauty is more than the sum of its parts.

For me the real magic of this camera is its sheer ease of use and accessible performance – after all what is the point of having potentially amazing performance if you can’t easily and consistently access it?

Until now, the medium format sector has been dominated by cameras which require expertise and experience to get the very best from them. If you got it ‘right’ with one of them, nothing would come close in terms of image quality.

The primary challenge being the optical finder, which made getting the last critical degree of sharp focus – particularly at wide apertures – challenging to say the least. By moving to a mirrorless solution, FUJIFILM have overcome this challenge. With my 52 year old eyes I was consistently getting perfect, sharp focus manually time after time – something that even with my years of medium format experience I would have struggled to achieve with a medium format camera with an optical finder.

As aforementioned, I have been contributing to the development of this camera for some time, so I do have a ‘horse in this race’, so to speak. If I have made a mistake in this blog post it would only be that I have made comparisons to other medium format cameras (even though it is most definitely a medium format camera sharing the same sensor dimensions with the Phase One IQ250, Hasselblad H6D-50C).

So, FUJIFILM have not only re-defined the medium format camera but they have made a world-class camera which will be of great interest to DSLR users too. This will allow more people than ever the possibility of creating beautiful, detailed images which they could never have done before with a minimum of fuss and great reliability.

For the last decade or so I have been lucky enough to use a medium format camera on a regular basis. Thanks to the relatively high costs of those cameras I understand I have been in a privileged position. What excites me most about the GFX is that even if it is not exactly a cheap camera, quality medium format photography is now within reach of many more photographers. My closing lines on this review will be exactly as I tweeted: ‘The curse of having used a Fuji GFX is shooting with a lesser camera & knowing the images are not as good as they could have been on the GFX’.

Internationally acclaimed photographer Drew Gardner is a pioneer in his field winning numerous awards for his creativity. Known for his ability to deliver technically and logistically complex shoots, his expert use of light and his attention to detail have earned him an enviable reputation.
Drew started his career as a photojournalist travelling to over 50 countries photographing a wide spectrum of news events and personalities for the world’s most respected news and lifestyle magazines and newspapers. A master of reinvention, he is now best known for his big ideas and big productions. His work is influenced by his experiences bringing a strong narrative and cinematic feel to his imagery.
He is also an educator presenting workshops and lectures around the world.