My decision to study alternative or ancient printing techniques was motivated by several reasons.

The first reason lies in the fact that having started to photograph using the film (the loved Fuji Neopan 400 and 1600 ISO) I have always considered that a photograph was such only when it is printed. I believe that today the difference between a true photographer and “Facebook photographers”  lies in the ability to produce good prints. On the internet, in fact, even a photo taken with the smartphone as we all know may appear as valid as that of a full frame, but when we go to print the pictures everything changes.

The second reason lies in the fact that I think the photo printing is still the best and most reliable form of archiving and storage of images compared to the mere cataloging of files on cloud or hard disks.

The third reason is that photographically I am very close to pictorial photographers like Stigliz or artistic photographers such as Alfred Stieglitz, Hiroshi Sugimoto, Michael Kenna, Kenro Izo, Simon Marsden, all dark room experts and some platinum palladium lovers. 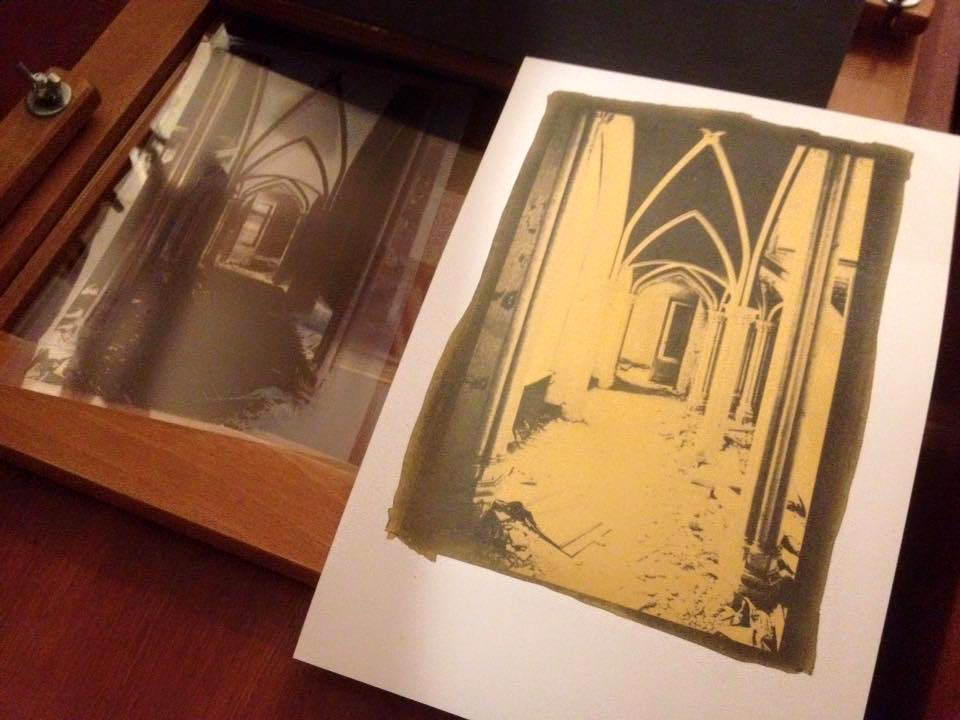 The last reason lies in the craftsmanship of the dark room, a place where time seems to stop and leave space for what Roberto Lagresta calls slow photography. The darkroom is also a real, physical place where you can work and interact directly with other people with the possibility of establishing a convivial and constructive atmosphere and so to make new friends for life. 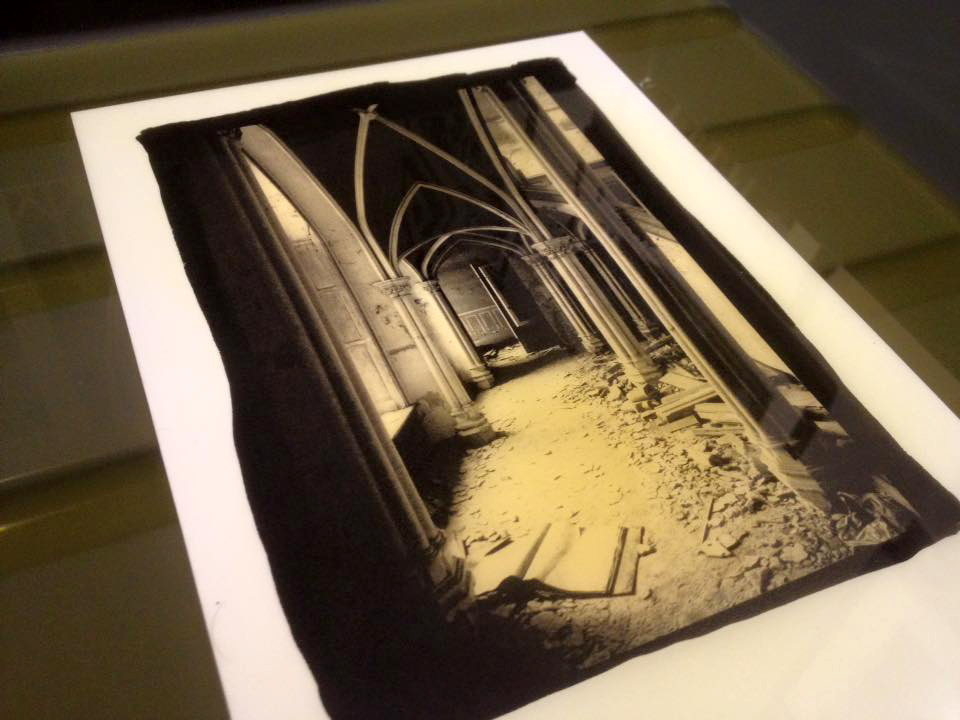 As for the procedure chosen by me among the many available in the world of alternative photographic techniques, I focused on pure palladium. Palladium is a noble metal like platinum but a little less expensive and above all excellent for black and white given the wide tonal range.

Below I will briefly summarize the procedure and the necessary tools:
The first problem you face when you want to start printing platinum palladium or other alternative techniques such as vandyke is the fact that they are all contact printing techniques, so they require large negatives or the use of a large format camera. The large format is a wonderful tool, but has two main drawbacks: the limited number of shots that can be done and portability.

These two factors make it in some cases such as air travel, mountain hiking, reportage, street photography very inconvenient to use. The smaller and transportable large format cameras in fact use negatives of quite small dimensions that produce very small prints those of bigger dimensions are instead very heavy and usable mainly in the studio. Fortunately, however, there is the possibility of creating negatives from digital photographs through the use of professional inkjet printers and special transparencies. 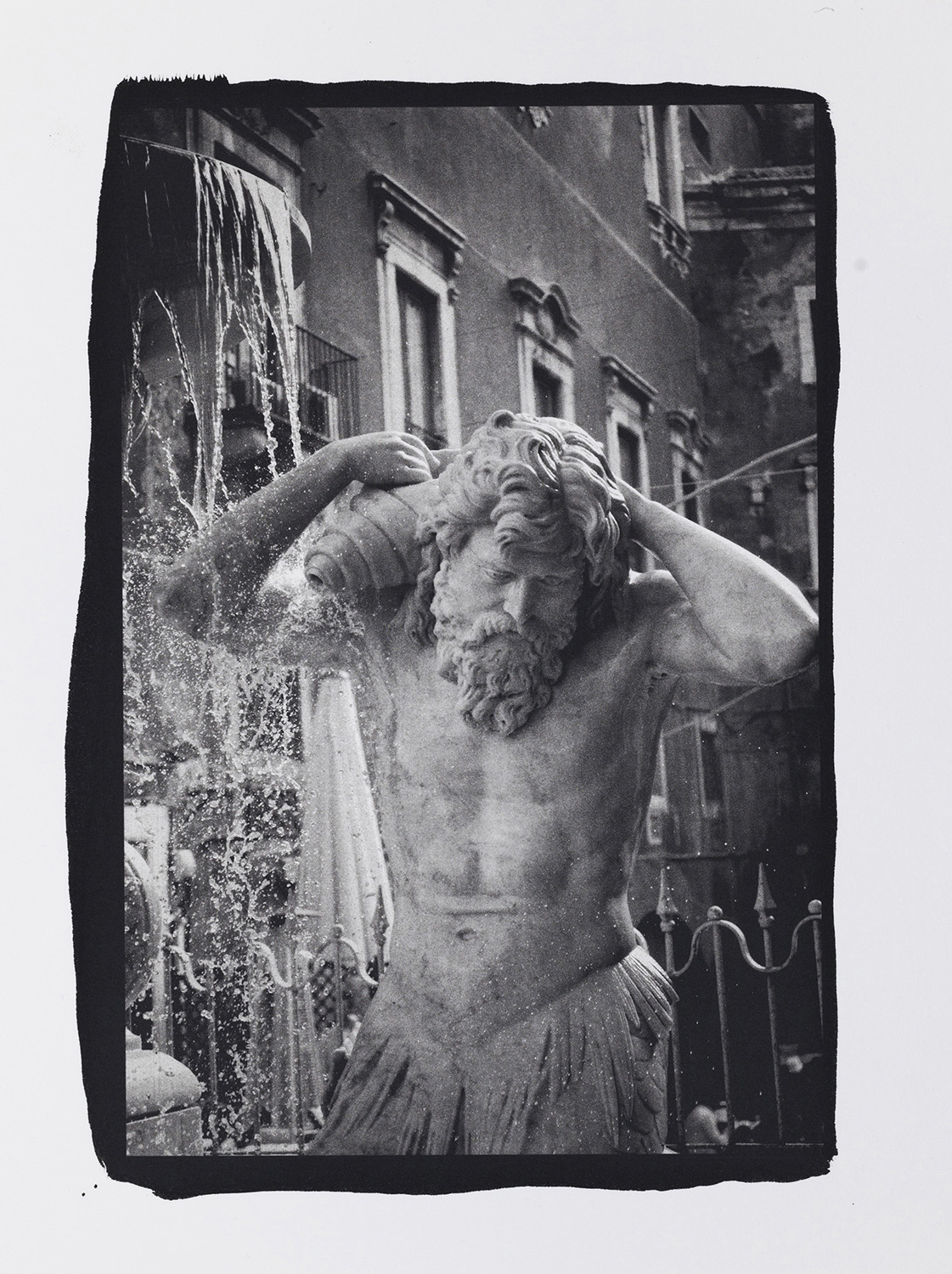 Personally, together with my friend Misha Cattabiani, we opted for this solution which, however, requires a lot of time and patience. Producing a printable digital negative is a complex operation since many factors must be taken into account. It is not enough to apply the negative Photoshop function, but the dynamic range and the density of the negative must be adjusted according to the instrument we will use to print: the bromograph. The alternative techniques are in fact only sensitive to UV light.

Each Bromograph is different from another (unlike the magnifiers that are quite similar to each other) so for  that every digital negative must be created exclusively for a single bromograph. This means that before obtaining the correct settings for the creation of the negative it is necessary to carry out different printing tests. The bromograph can be purchased used by  a typography which have changed their tools or built at home, on the internet there are several projects. Once you have built the bromograph and optimized the settings for creating the digital negative (we took about 6 months) you can start! 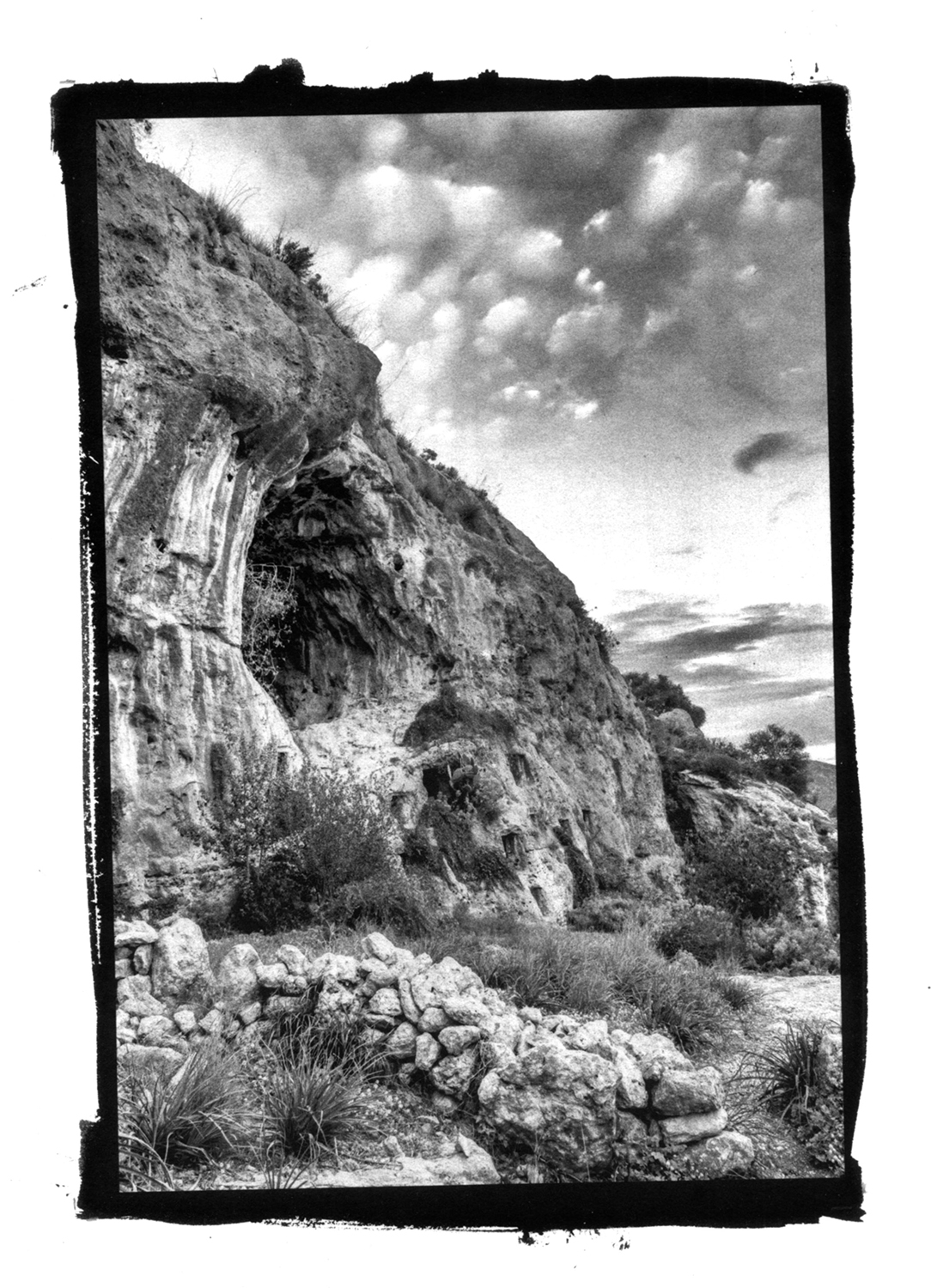 The procedure is rather simple: first you need to create the sensitizer that will be spread on a high quality paper (such as Fabriano artistico) with a brush and dried. The sensitizer is composed of Platinum and Palladium salts in proportion decided by the printer and joined to Ferric oxalate with the addition of a contrast agent such as potassium chlorate or NA2.
The sensitized sheet will be exposed together with the negative in contact with the UV light source or the bromograph.

The exposure time in the case of the use of a digital negative is fixed, since the density has been preset by photoshop, while in the case of using a traditional negative or a glass plate it is variable exactly like in the silver photograph. If you use traditional negative you will have to perform some printing tests with small strips of paper in order to choose the best exposure.
Once the negative has been exposed, it will first be developed in ammonium citrate and subsequently subjected to three different washings: EDTA 3, sodium sulfite, EDTA 4 in order to remove the minerals that could degrade the print in the future. 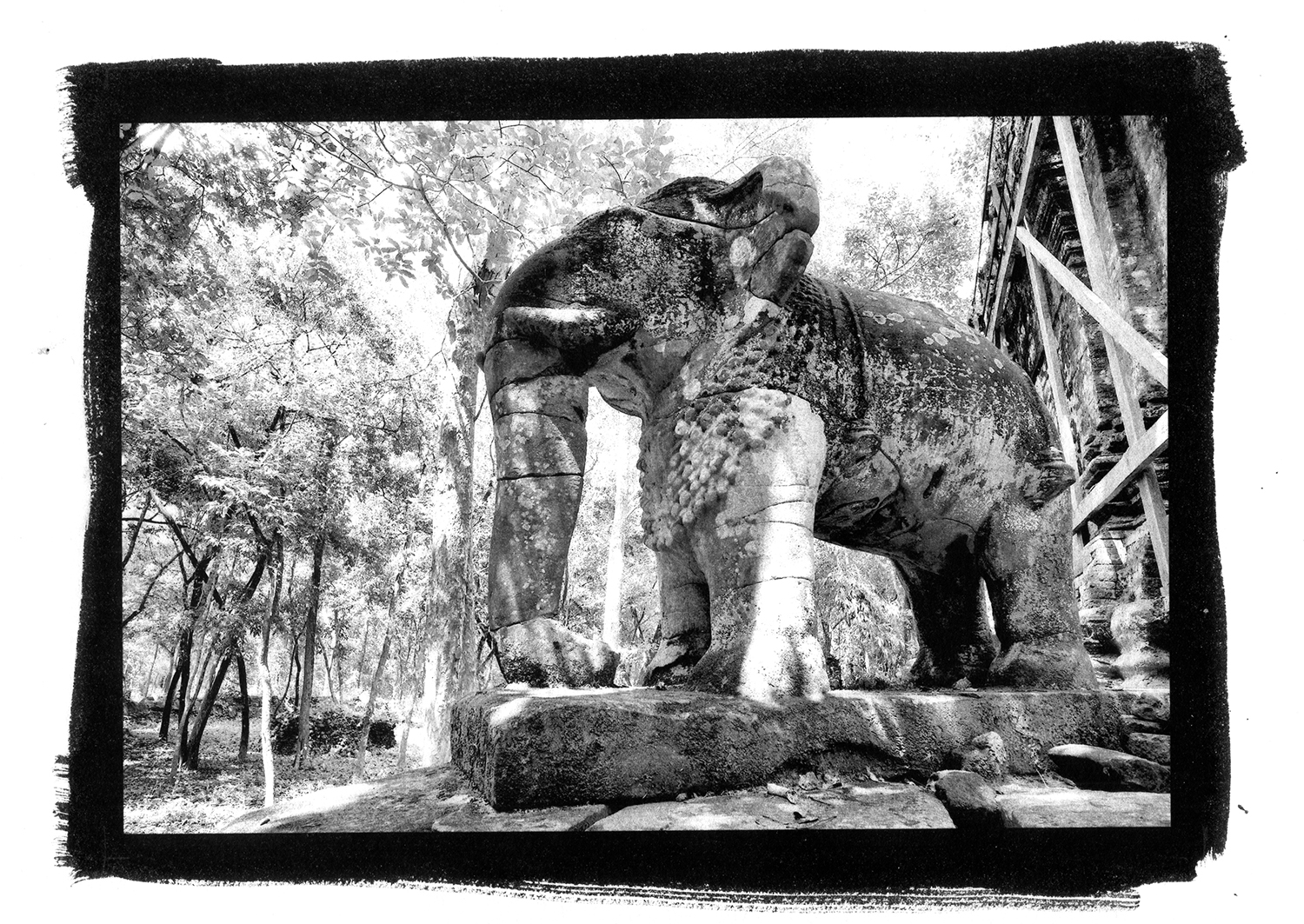 The final results depend on many variables (in the darkroom you never stop to learning) for example the warm or cold tone of the final result can vary as well as for the different mix of platinum and palladium also used for the use of a paper in place of another. The purchase of a good manual I think is essential to approach these techniques, I personally recommend to Italian readers the books of dr. Giorgio Bordin (http://www.bordinphotographic.it/manuali-antiche-tecniche/) for the English-speaking readers there are several publications by Mike Ware (http://www.mikeware.co.uk/mikeware/Platino-Palladiotype.html).

Following you can see  some pictures of mine that are a part of a project related to the temples of Cambodia and Thailand. The retro appeal of alternative printing techniques I think fits perfectly with these shots enhancing them.

The photographs were made with a fujifilm X-E2 with the lens XF 14mm and XF 18-55mm.

“I am 43 years old I live in Parma in Italy. Photographer for about 20 years. I love to photograph in black and white especially landscapes and architectures. Last year I self-published a photographic book on Sicily that was presented on fujixpassion. For about a year together with my friend misha cattabiani I started to print with alternative techniques such as platinum palladium and vandyke brown print.”