Documenting the Amazon with Fuji

I am the youngest of 3 brothers. My mom always liked photography whether it was hobby or work. She was a researcher / biologist and always had to take pictures of the expeditions she made and the insects she was studying (she was an ant and termite expert). She had a Pentax K1000 and an Olympus Trip 35s. On a trip I took with a friend, in 1999, I took this Olympus camera along with me andI never stopped taking pictures ever since.

The passion for photography actually reached its peak when my eldest son was born in 2007, when I began to study and dedicate myself. I bought better cameras and lenses.

As a civil engineer, I had to submit reports monthly with photographs of the development of the construction companies; so I enjoyed the fact that I sometimes was at the top of the buildings and I was able to register the urban scenarios, the landscapes. Time passed by and the landscapes and buildings registers no longer satisfied me. I needed more, to contact people, listen to their stories and record those moments.

In 2014 my photography began to assume this change. I started to dedicate myself to street photography. I used two Nikon cameras (D800 and D600) and 35mm f/2.0, 24-70mm and 28-300mm lenses. For my trips, I had opted for a smaller camera that wouldn’t call so much attention. It was that time I got acquainted with mirrorless system and Fujifilm. I bought my first Fuji and the model chosen was the X-E2.

At the beginning, I used Fujifilm as a backup camera when needed to shoot street photography and, I was realizing that the X-E2 results for portraits were better when compared to Nikon D800. I no longer used RAW with the X-E2 and the result of JPG colors were extraordinary. That’s when I made the decision: I’m going to abandon the DSLR system and immerse myself in the Fujifilm world. I had only two Fuji lenses at that time: the XF 18-55 and the XF 55-200. When it turned 2016 I bought my first Fujinon fixed lens: XF 35mm f/2.0 WR) and I was amazed by the quality of sharpness, contrast, clarity, bokeh and, of course, focal speed and almost imperceptible weight. I thought: Why did it take me so long to switch?

Fujifilm system setting, mirrorless system advantages, and Street Photography approach
As I began to focus on street and documentary photography, the use of DSLR camera with grip or zoom lenses somehow intimidated people. It was hard to walk the streets and approach, besides the discomfort due to weight and back pain at the end of the day. It was not being delightful to shoot with such weight, discomfort and apart from the risk of being robbed because you are using such sturdy equipment in the streets. I needed to change!

The cost-benefit of body + lenses is an attractive of Fujifilm, in my opinion. You can have state of the art equipment at a fair price. Another significant feature is meeting the demand of the brand’s photographers. Constant firmware upgrades for cameras and lenses, new product releases that always meet user expectations.

Photographing in the streets has become an even greater addict. The approach of people happens naturally, the size of the camera no longer intimidates so much and there are no pains in the wrists or the back at the end of the day. A funny fact is that people often think I have an analog camera, or those old ones, and they feel even more comfortable. I believe there is this psychological factor. When I’m with fellow photographers I take the pictures and show them on the camera screen, they are impressed by the Fujifilm movie simulations and even joke: this camera comes with Photoshop! The photos are almost ready right from the camera, where my only job, sometimes, is to insert my signature, but when I’m with a small volume of photos I transfer to my smartphone and make small adjustments in the same phone and post to social networks. I think it’s great to have that mobility. For photojournalism this is essential, agility at work.

Being in a very hot and damp area, Fujifilm cameras work normally. Both the WR series of standard lenses, there’s have nothing to complain about. The only care I have is at home, where I always keep a room temperature to keep the equipment away from moisture and fungi. Here in Amazonas, it is amazing how high the humidity level is.

These people live the same way as their ancestors from centuries ago. Because they do not have external contacts, they do not know what is happening around the world. They live from hunting, fishing, collecting vegetables and subsistence agriculture.

The Amazon portrayed often shows the exuberance of rivers, forests and animals, but the riverine caboclo, the indigenous who has difficulty in being inserted in society and social ills are often ignored.

My photography is focused on the Amazon, the caboclo who lives the drama of social forgetfulness and his daily struggle to get the daily bread for his family. Because it deals with such complex subjects, the photographic series will be divided into several chapters that are independent and that, in the end, may be joining or not to a bigger project, but, at the beginning, the objective is to portray the Amazon everyday in its most diverse aspects:
a) the day by day on the edge of the Rio Negro in the port area of Manaus – Portraits of Beiradão;
b) the culture, customs and life of the natives of Amazonia – natives;
c) Municipalities that integrate the metropolitan area of Manaus but live a well contrasted reality of the capital., in the specific case of the municipality of Cacau Pirera – The Other Margin; 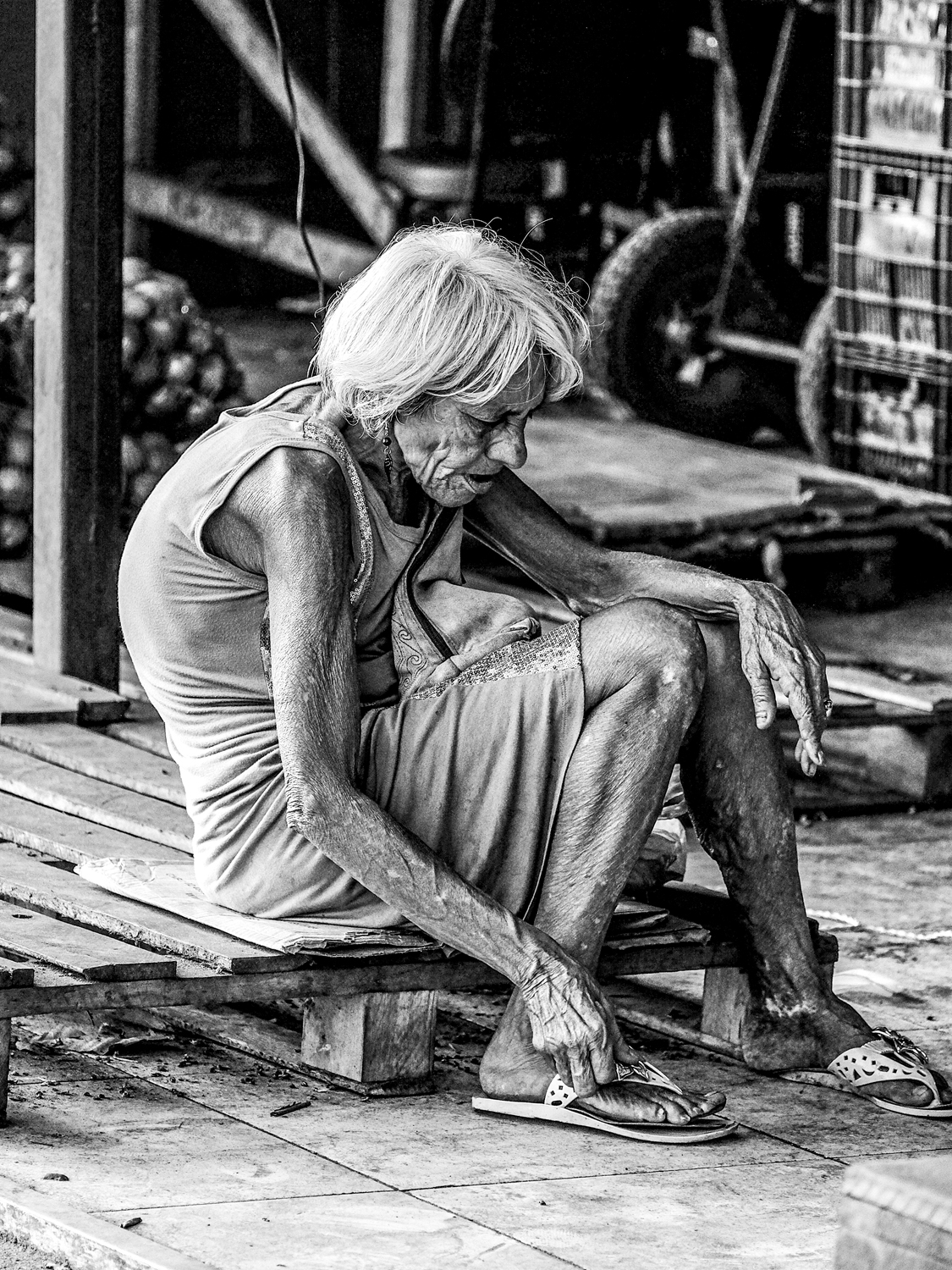 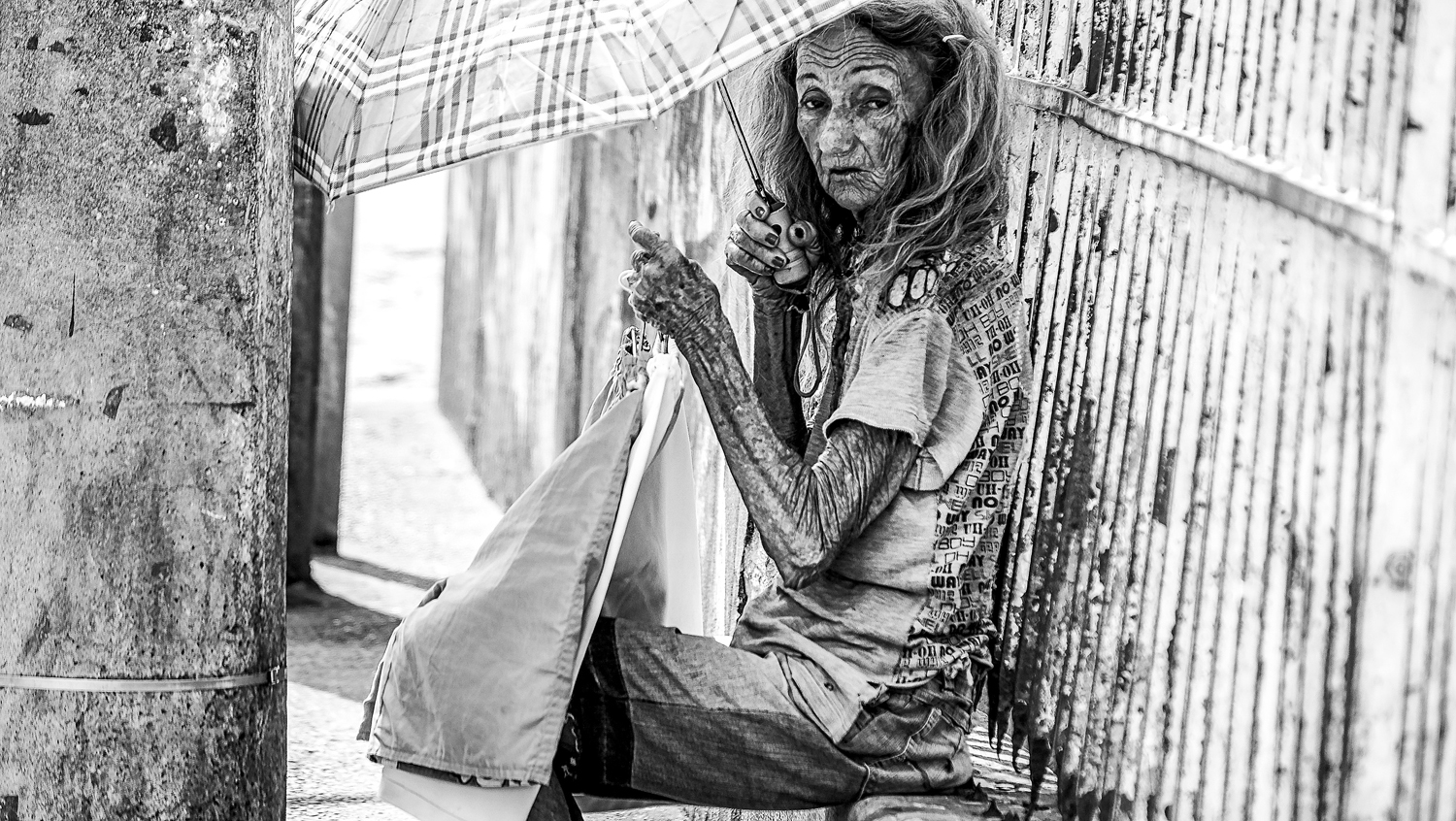 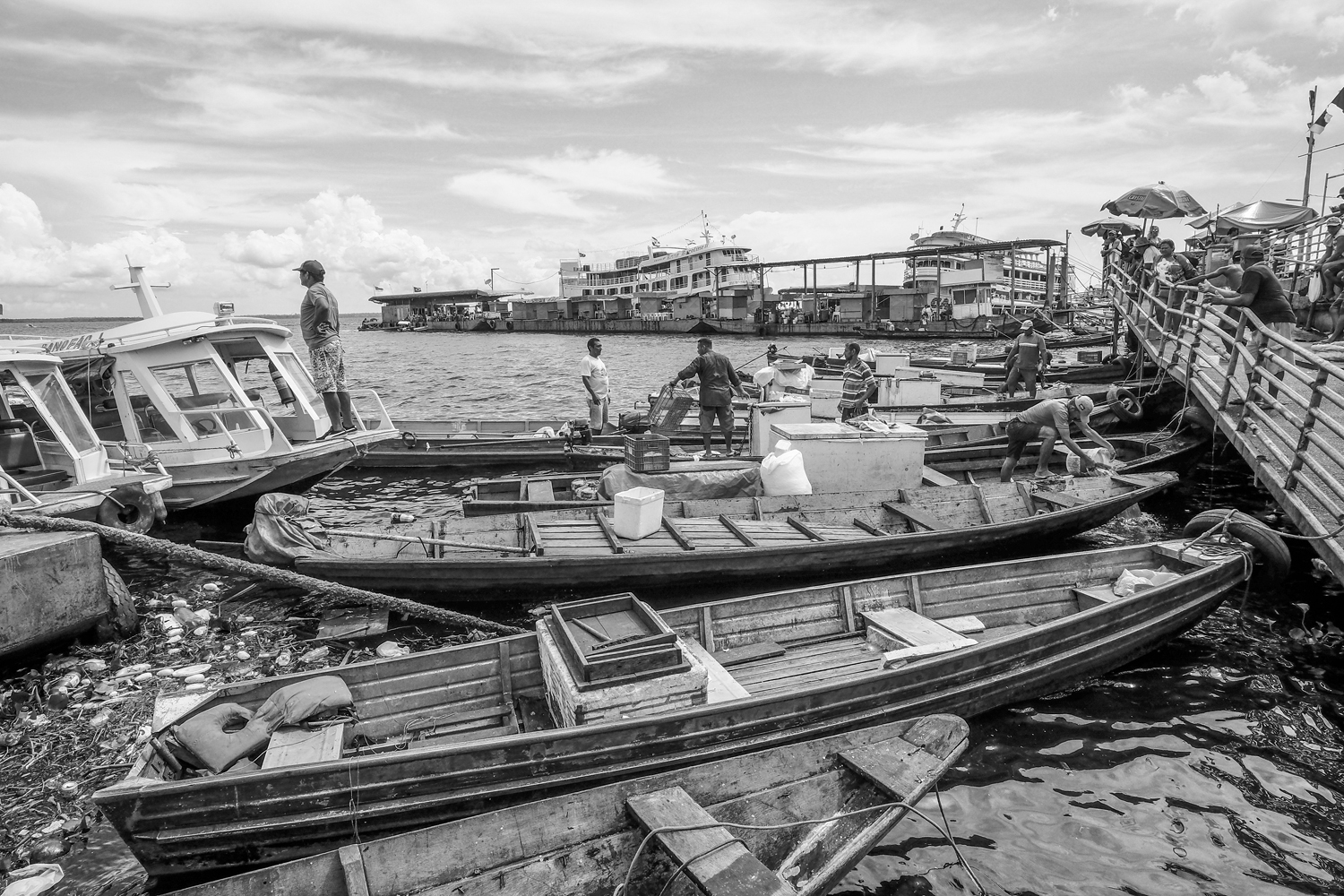 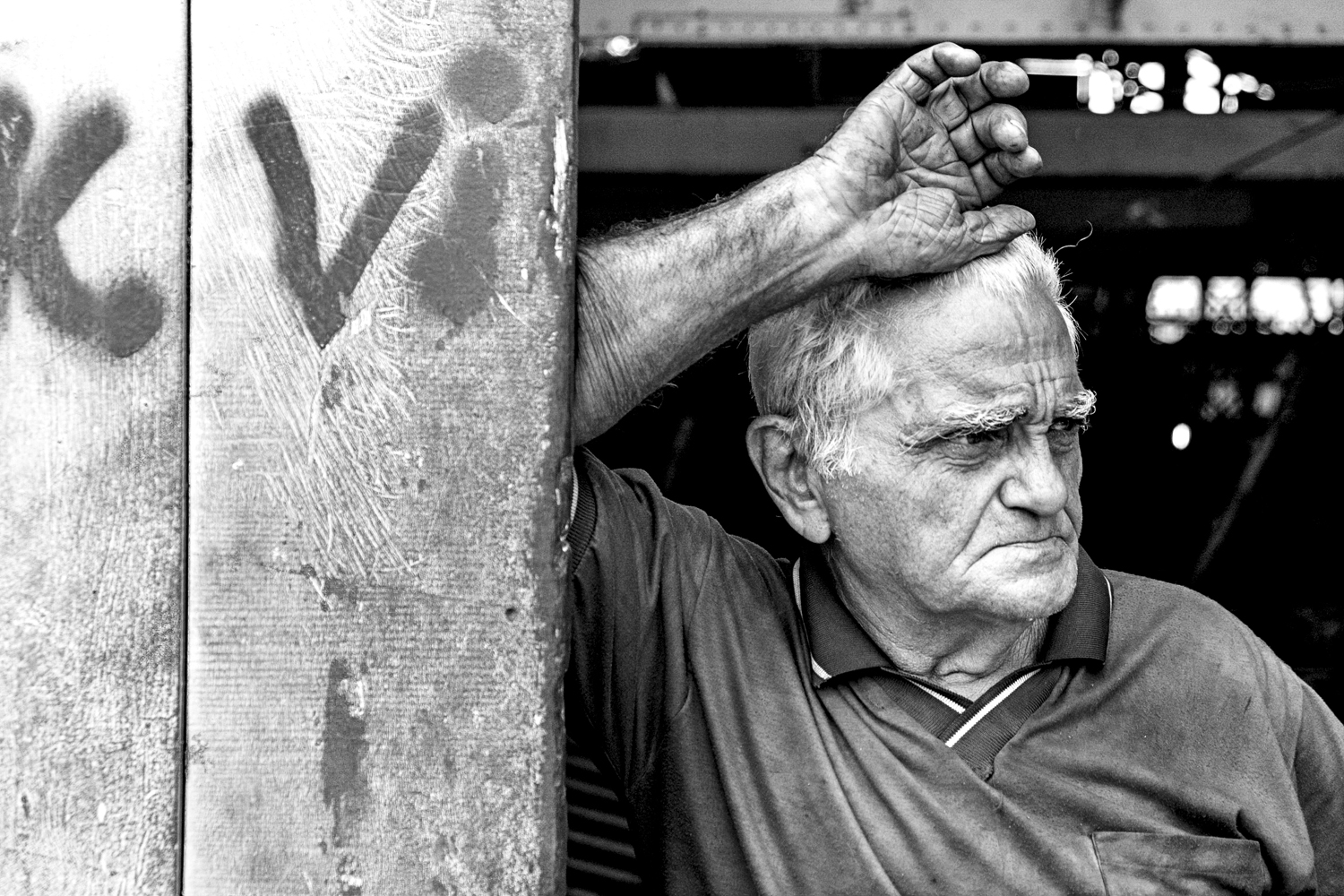 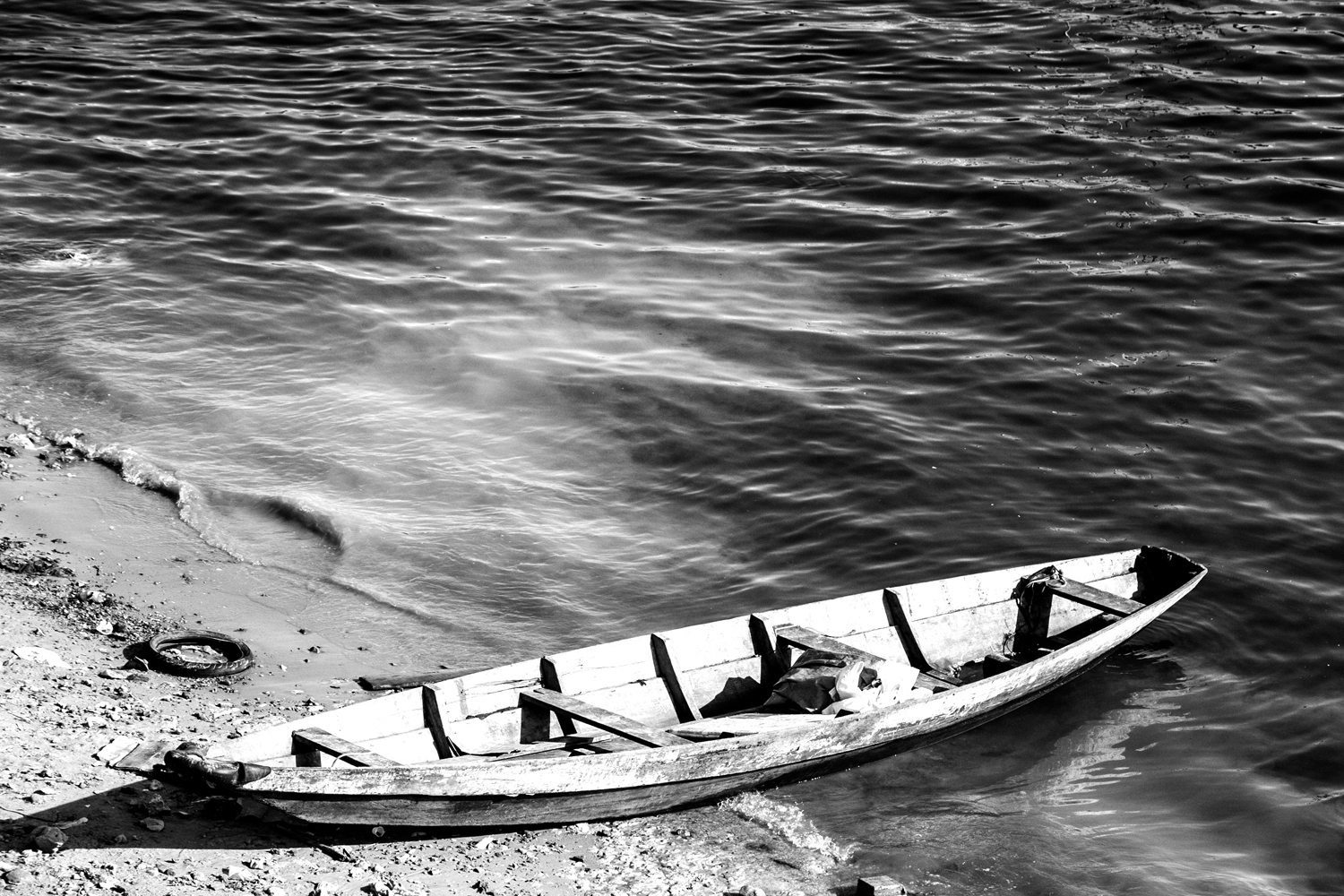 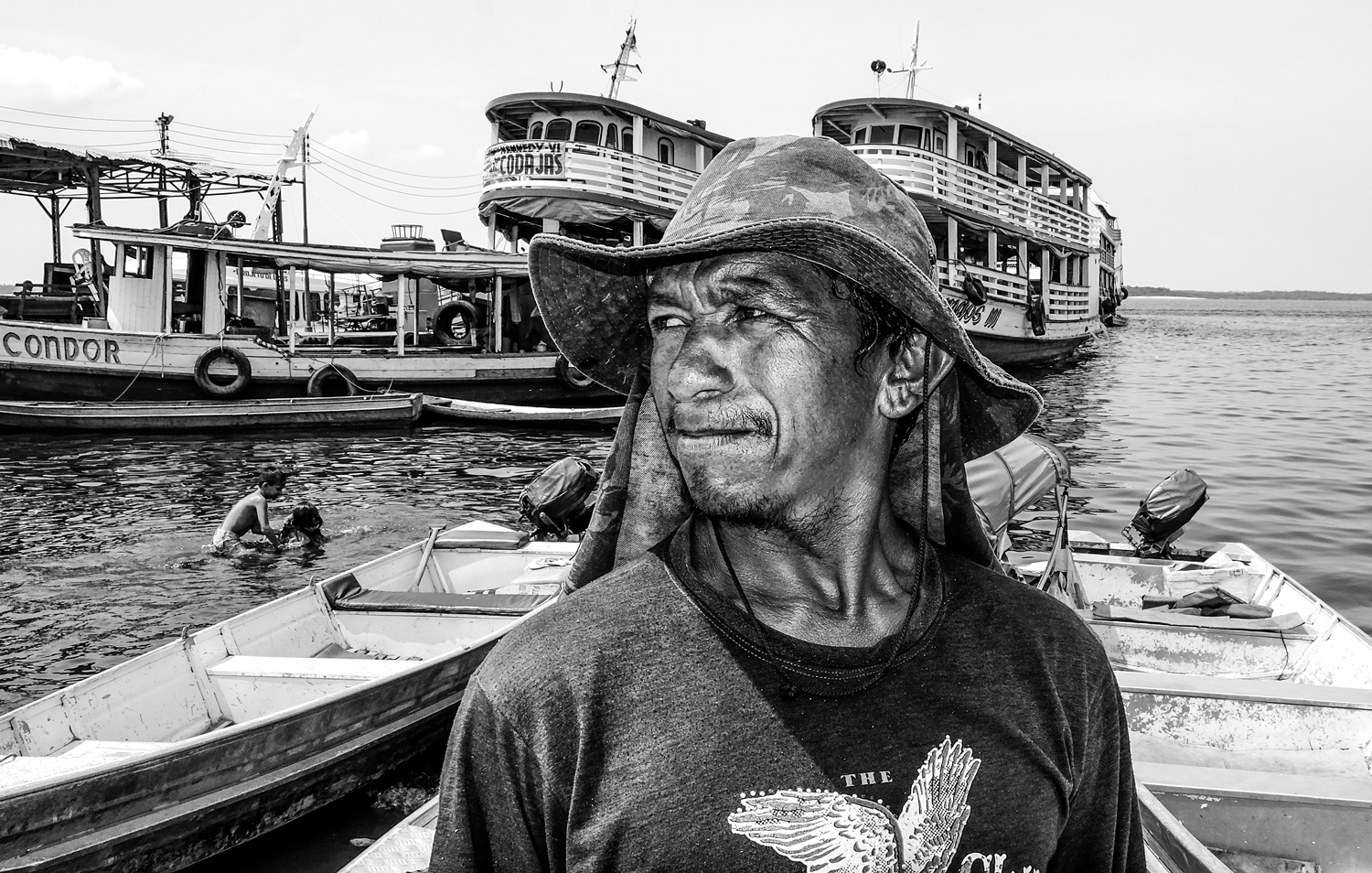 The Modern Manaus, as it is known the port area of Manaus is full of charms, mysteries and dramas. In the port of Manaus the Amazonian cultural meeting takes place. Ribeirinhos from various regions around there pass by every day, either arriving with their fish for sale, people going to meet the fishermen and travelers who arrive at Manaus or say goodbye. On the other side, the social abandonment of so many elderly people have through the streets of downtown is portrayed. The lack of a more humanistic policy makes it clear the social disparities that the Brazilian faces. 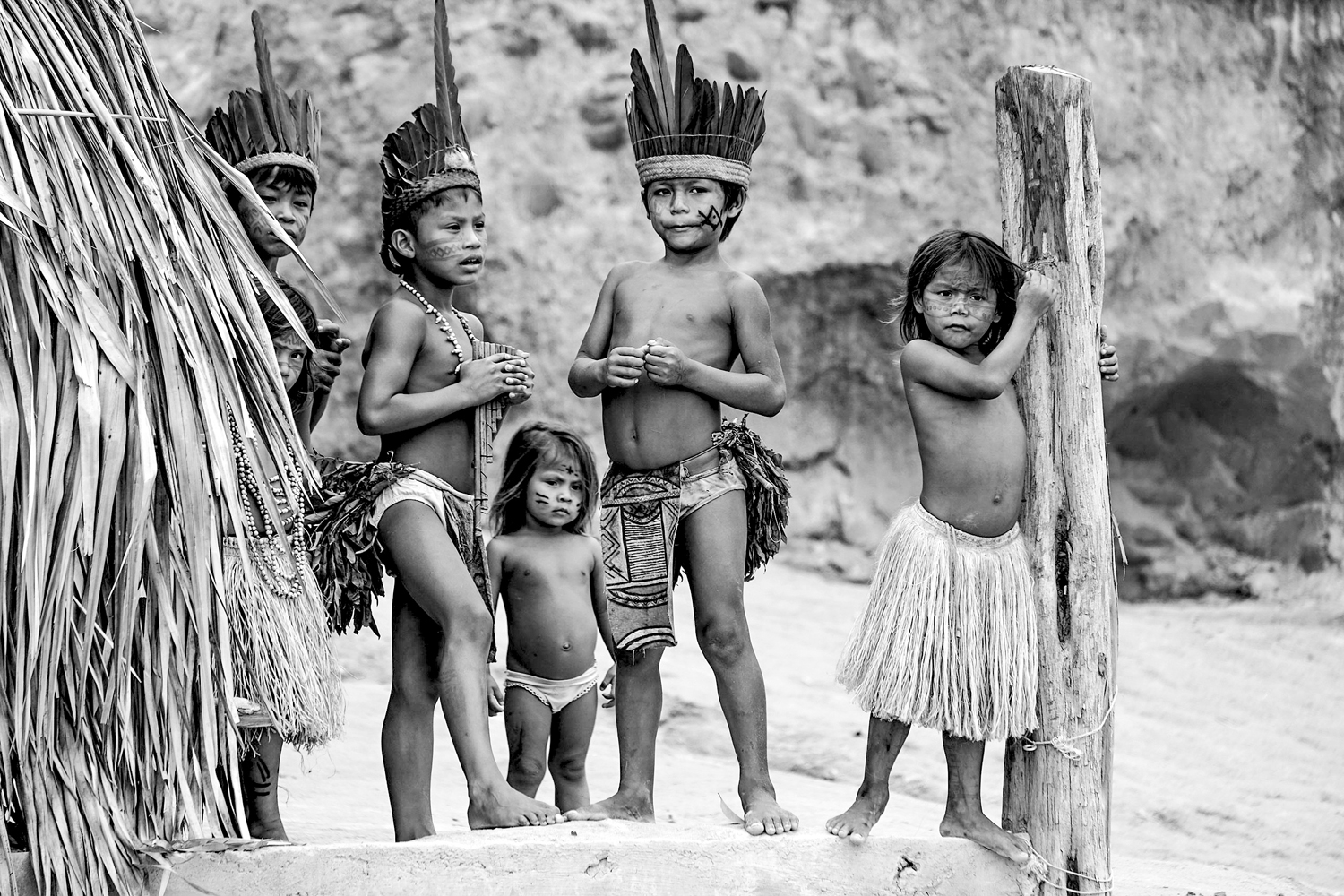 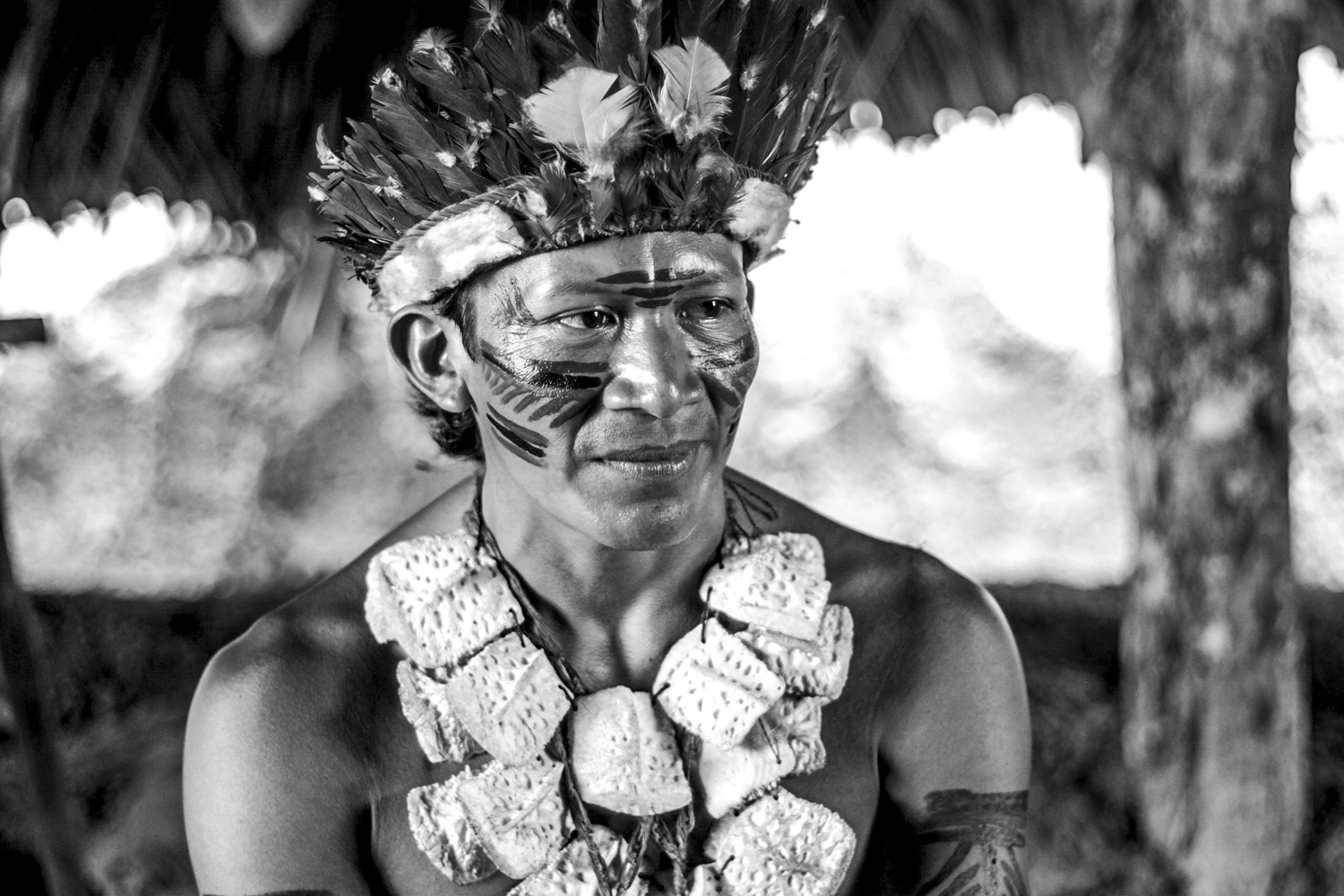 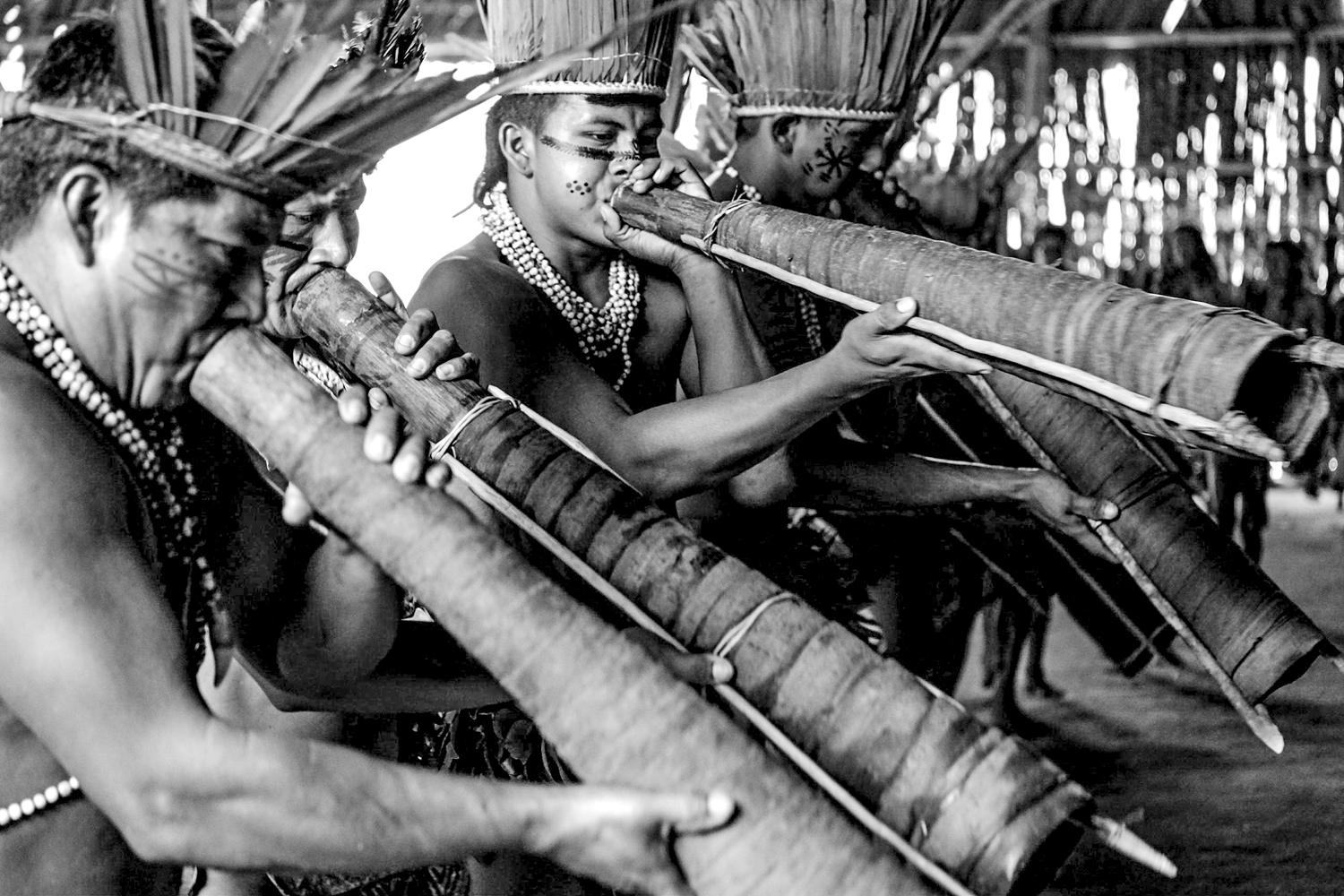 Tribes of the Tauyos, the banks of the Rio Negro.
“Native Look represents the identity of the Amazonian people, a perspective of those who live in the middle of the Amazon jungle in the middle of the chaos of the concrete jungle. River roads lead the ribeirinhos to asphalt avenues, the technology that brings the information is the same that propagates the resistance of the indigenous culture of the resident peoples at the banks of the Rivers of the dark or muddy waters.

The Amazon is resilient, makes their survival an art. Their economy is focused on tourism, fishing, agriculture, sales of artifacts and social programs of the federal government.
Native and often overlooked culture still pulsates strongly at the banks of rivers amidst forest and chaos. “ 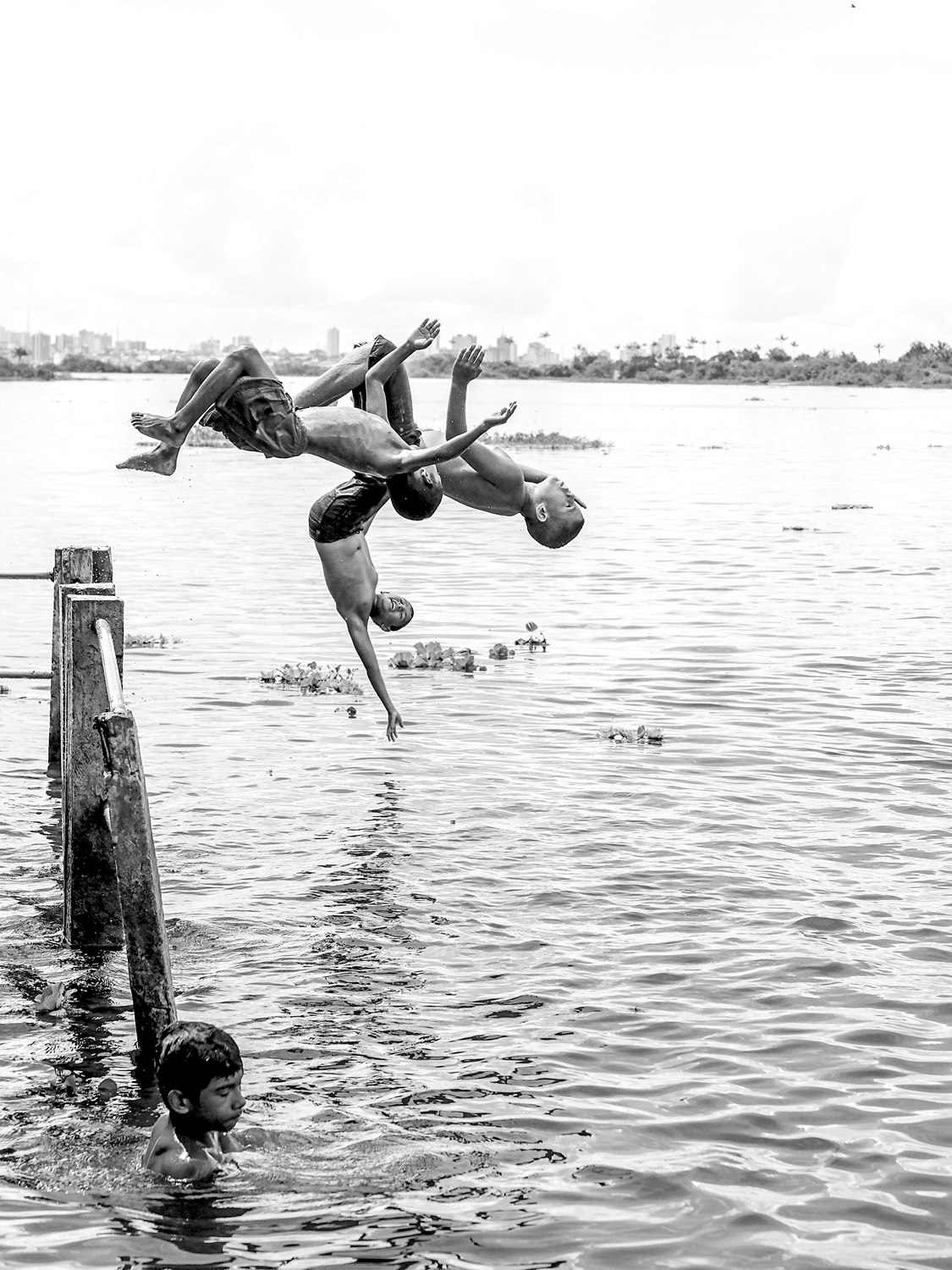 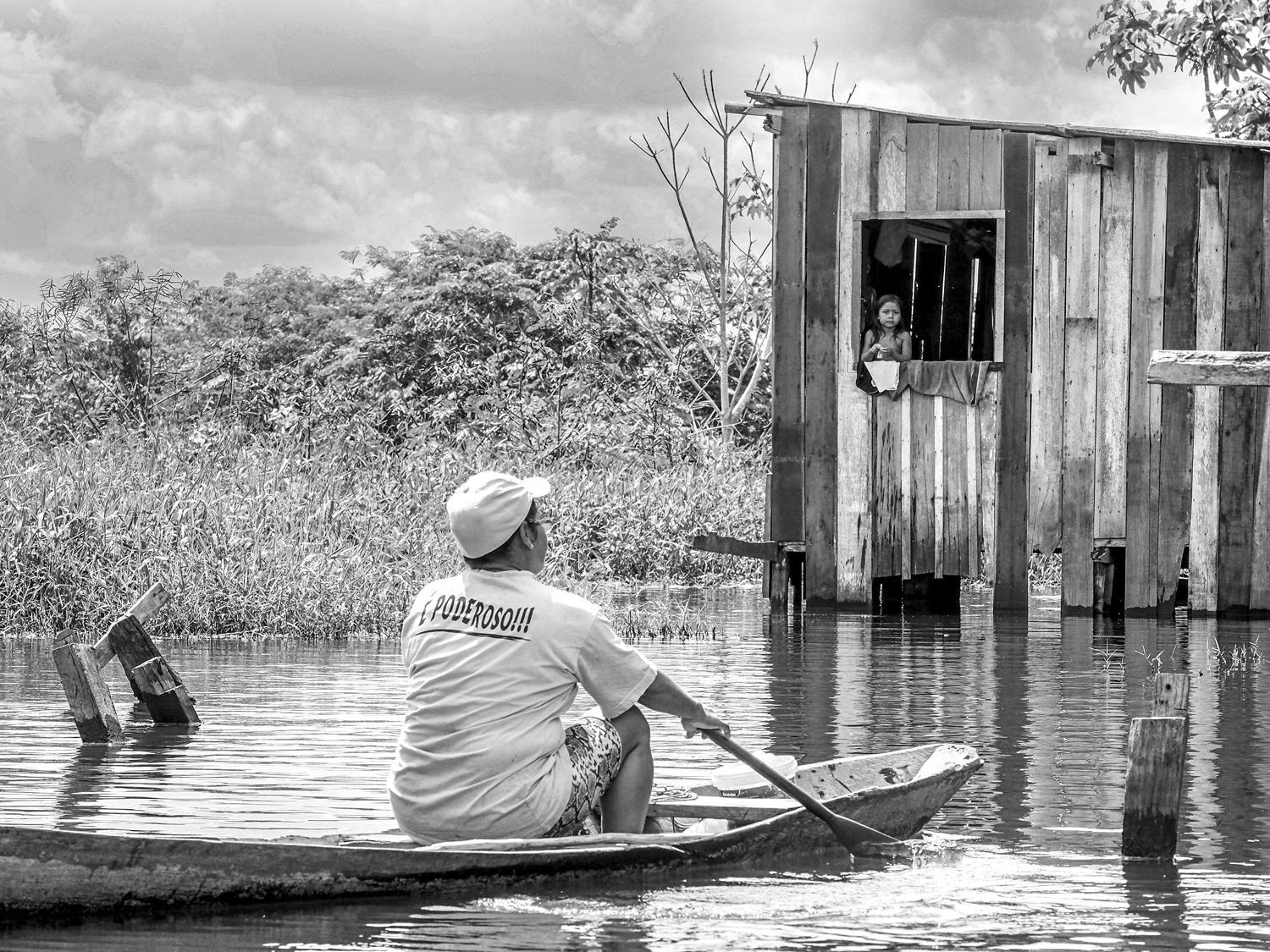 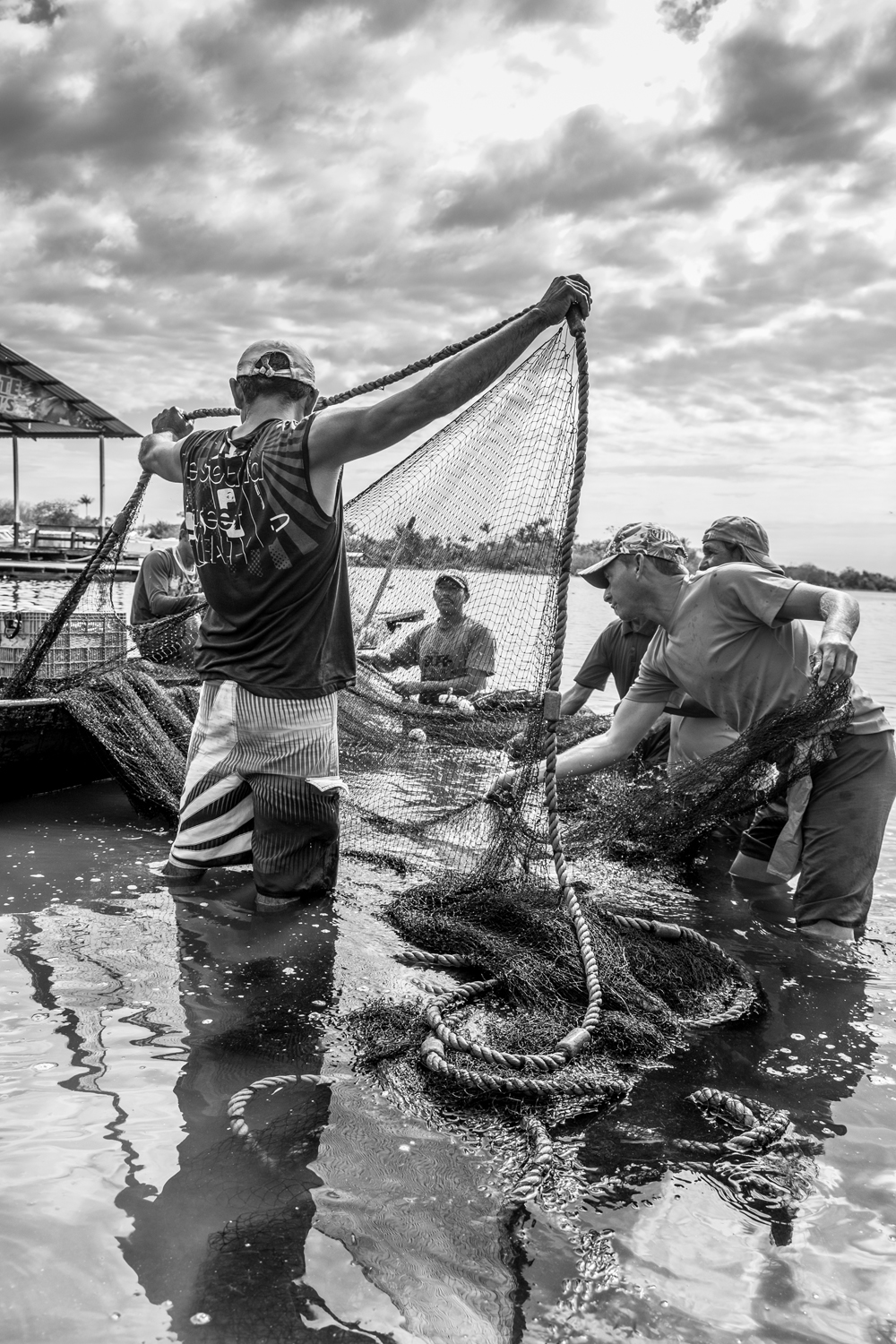 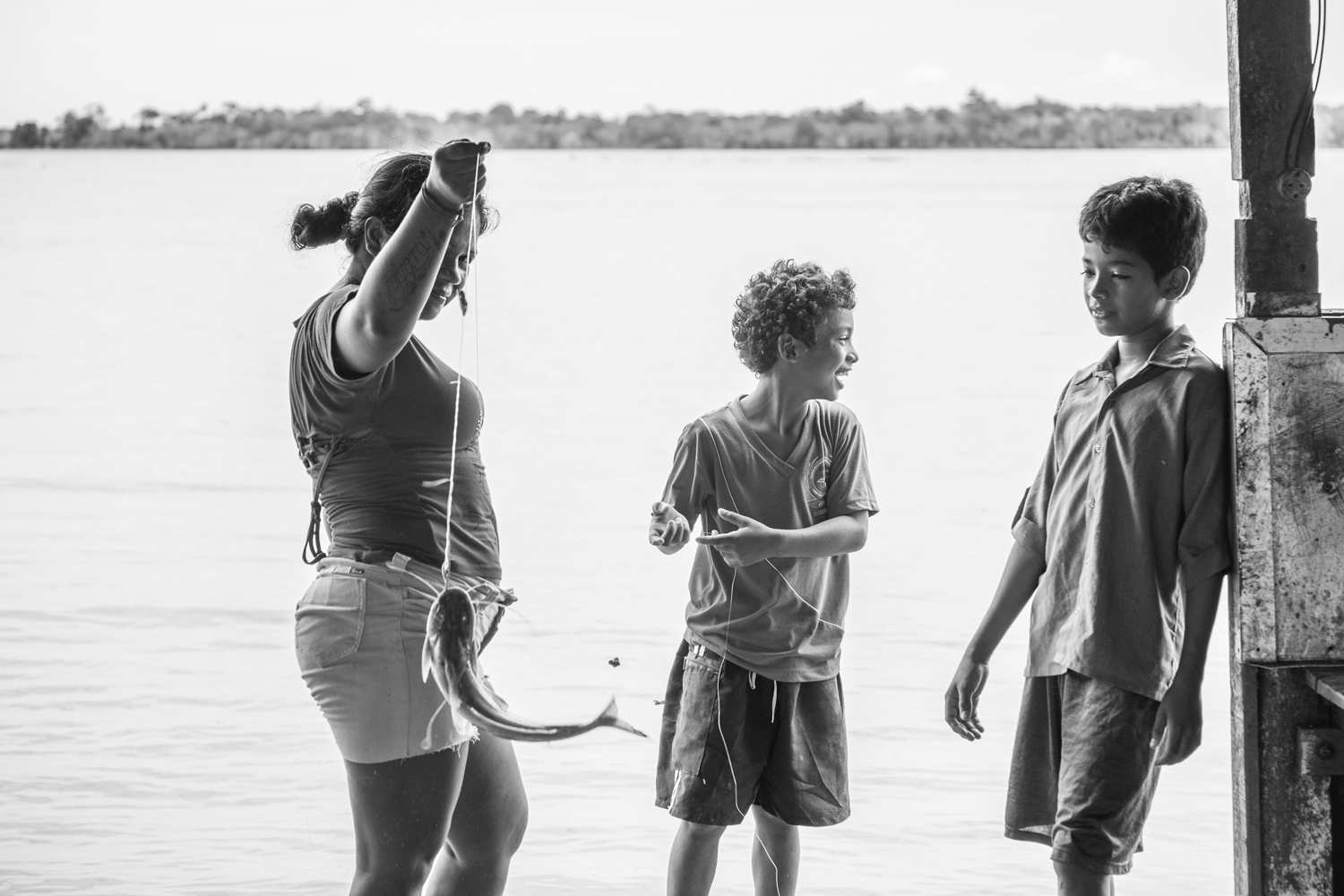 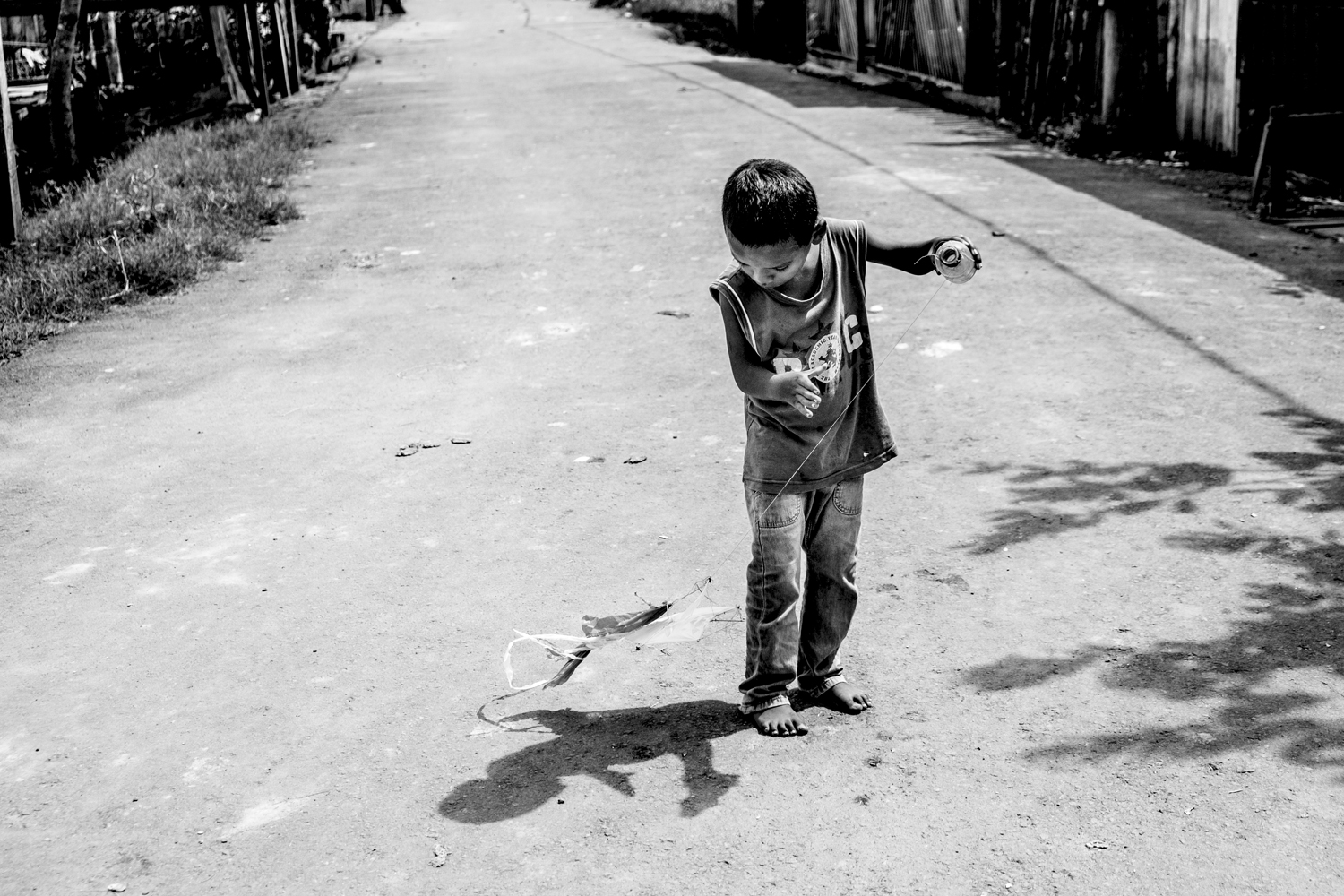 The Cacau Pirêra District, whose project was a village from an exploration colony created by one of the governmental projects of occupation and economic development of the Amazon that dates back to 1946. The beginning was marked by the arrival of Japanese immigrants who came to work with agriculture.

Standing on the right bank of the Rio Negro, the access was given through the use of ferries. For many years they have spoken and even built the Rio Negro Bridge, one of the great landmarks of engineering and architecture in the state of Amazonas and Brazil. With the construction of the bridge came the promise of progress where the life of the ribeirinho would no longer be marked by precariousness and social abandonment. However, the ribeirinho people still await such progress…

The locality brings out the extreme social inequality in which the different Amazon communities live. Conflicts over land ownership, undue exploitation of natural resources, lack of schools, health posts and poor sanitation, as well as violence due to drug dealing and unemployment.

Portraits of an Amazon forgotten by the banks of the Rio Negro, the reality hidden by the shadows of the Rio Negro Bridge. The river of the dark waters determines during its flood and ebb the rhythm of  both ribeirinha life and the floating houses. 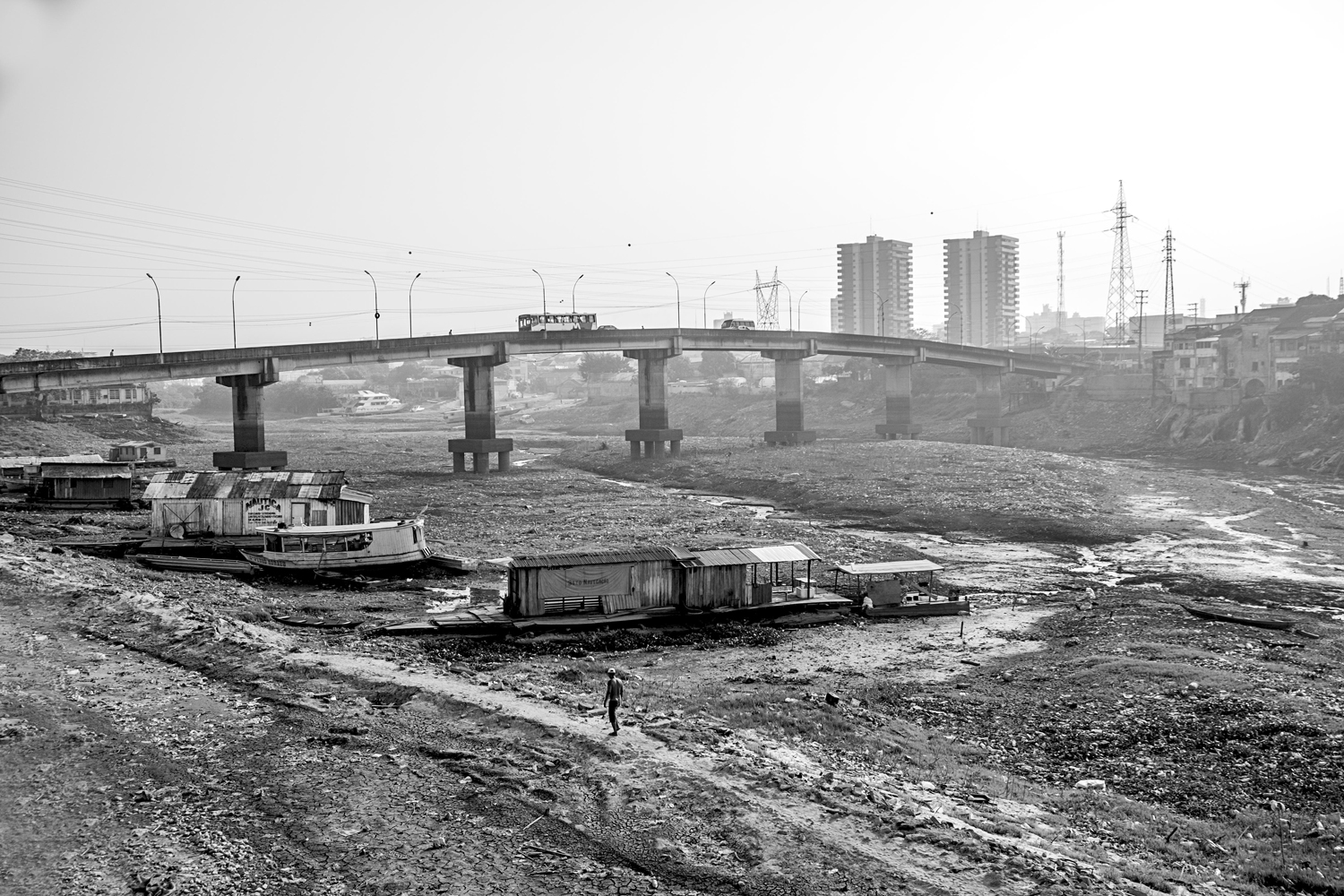 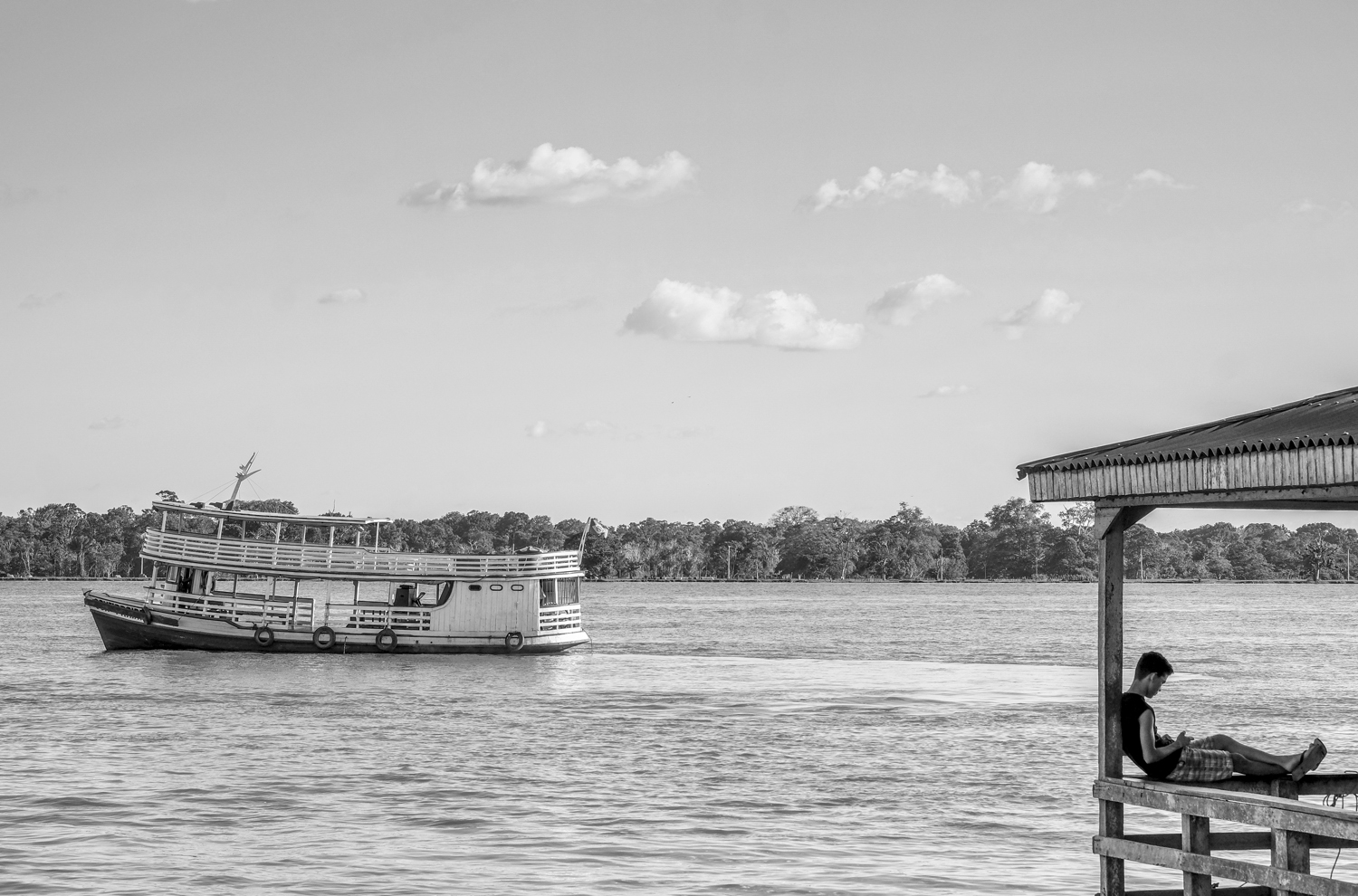 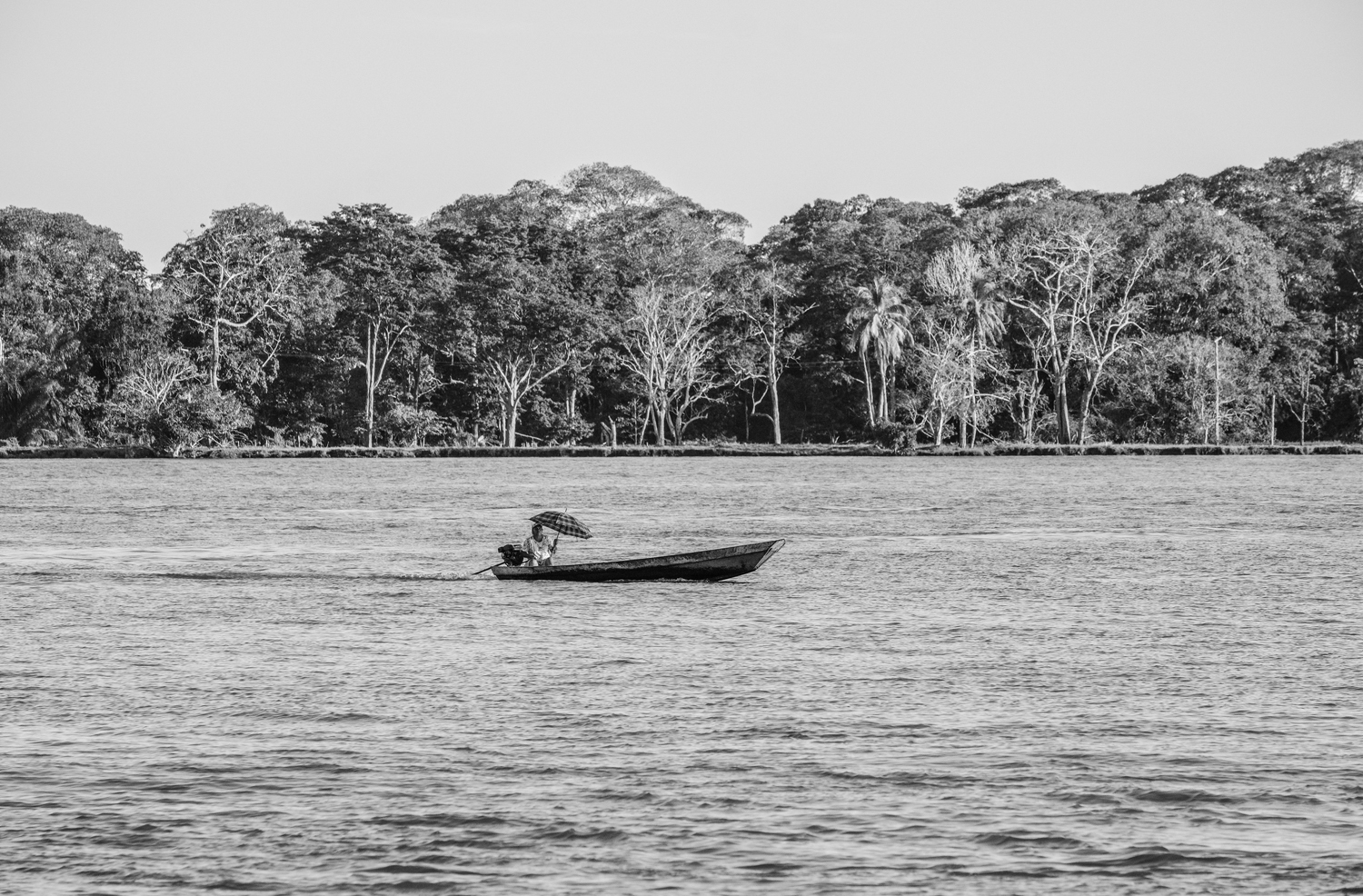 37 years old, father, Civil Engineer and photographer. Lives in Manaus (Amazonas) since 1992. Dedicated to street photography, documentary, portraits based on the Amazon themes. Lately, he has dedicated himself to three photographic projects: 1- Nativos – About the indigenous communities of the Amazon; 2- Retratos do Beiradão – daily portraits in the Port Zone of Manaus; 3- A Outra margem – Reality and social contrasts of the municipality of Cacau Pirera, metropolitan region of Manaus.