Growing up in the suburbs of a small town in New Jersey I had two creative parents my mother (originally from Flint, Michigan) who taught me how to draw and my father (A Jersey Boy) a hard working manual laborer who sang in bands his whole life. So I guess you can say that’s where my creativity all started. I remember receiving my first ever camera in 1999 or 2000 it was a Polaroid I-Zone camera. After that first exposure and pulling it out of the camera, seeing that 1.5"x1" photo I WAS HOOKED!

I was introduced to skateboarding by my best friend growing up (Grant) and it changed my life forever. Gave me the eye to look at things differently and notice a lot more because you are always trying to find that next spot to skate. I was always amazed by the photos in the mags and wanted to be that guy who went on the skate trips that documented everything.

Once I got my first point and shoot digital camera in high school for a photography class all I wanted to do is capture everything I saw.  Although there were no manual options with the camera I thought that’s okay because these shots are amazing. Looking back they really weren’t but hey it was a start. That same year my dad took me to my first ever concert besides seeing his band from time to time. It was at Madison Square Garden to see the reunion tour of David Lee Roth rejoining Van Halen! All I could think about was I want to be one of those guys in the pit taking the photos.

I received my first DSLR as a birthday gift my senior year of high school, a Nikon D60. I was amazed at the difference in my photos and couldn’t wait to learn how to shoot in the M setting on the dial like all the pros. After a couple years of shooting with the kit lens I decided to get the new (at the time) D7100 and bought my first prime lens a 50mm 1.8, a 18-55 2.8 and a 8mm fisheye. What a difference in my work I couldn’t believe the bokeh in portraits or the low light shots I was getting. The fisheye was mainly for getting skate photos or filming it. At the time I thought it was the ultimate kit.

A town over from me was a tiny venue that local bands could perform their original tunes in.  I figured hey let me bring my camera along to these shows each week and document it. It was a rough start in the beginning trying to freeze those moments it was definitely something that challenged me but I didn’t give up. A friend of mine Corey who sang in one of those bands asked me to shoot some photos of them for cash and I never thought that something I loved doing could make money.

Not to long after shooting shows I saw someone load a roll of film into a Yashica t4 and was amazed by the process I couldn’t help but to ask them everything I could. So with the job I had at the time I was driving pool parts all over New Jersey, the eastern side of PA, and New York. So I would stop in every thrift store I could find and look for cameras. I ended up acquiring a Yashica t4, the T4 zoom and a Canon QL17 GIII.

I couldn’t believe I found a rangefinder camera for so cheap! I was always into them because my favorite pro skater and photographer Ed Templeton used a Leica M6. After looking them up I realized I couldn’t afford one of these so having the Canon was the next best thing. At this point I was shooting with mainly film and my Nikon was just sitting there in its camera bag. There was nothing wrong with the camera I just felt a more creative side coming from my photography shooting strictly film.

I came full circle from shooting with my Polaroid as a young kid and now shooting 35mm. But I knew I needed to get something where I could switch out lenses depending on what I was going out to shoot and while on a trip to Vermont I bought a Nikon F3 HP. I was amazed by this F3 how you could change viewfinders and the ability to do double exposures. I was in love with this camera and ran roll after roll through it. Something about winding the film and hearing all the mechanics in a film camera was so amazing to me because it made me actually slow down each photo since there were only 36 exposures per roll. 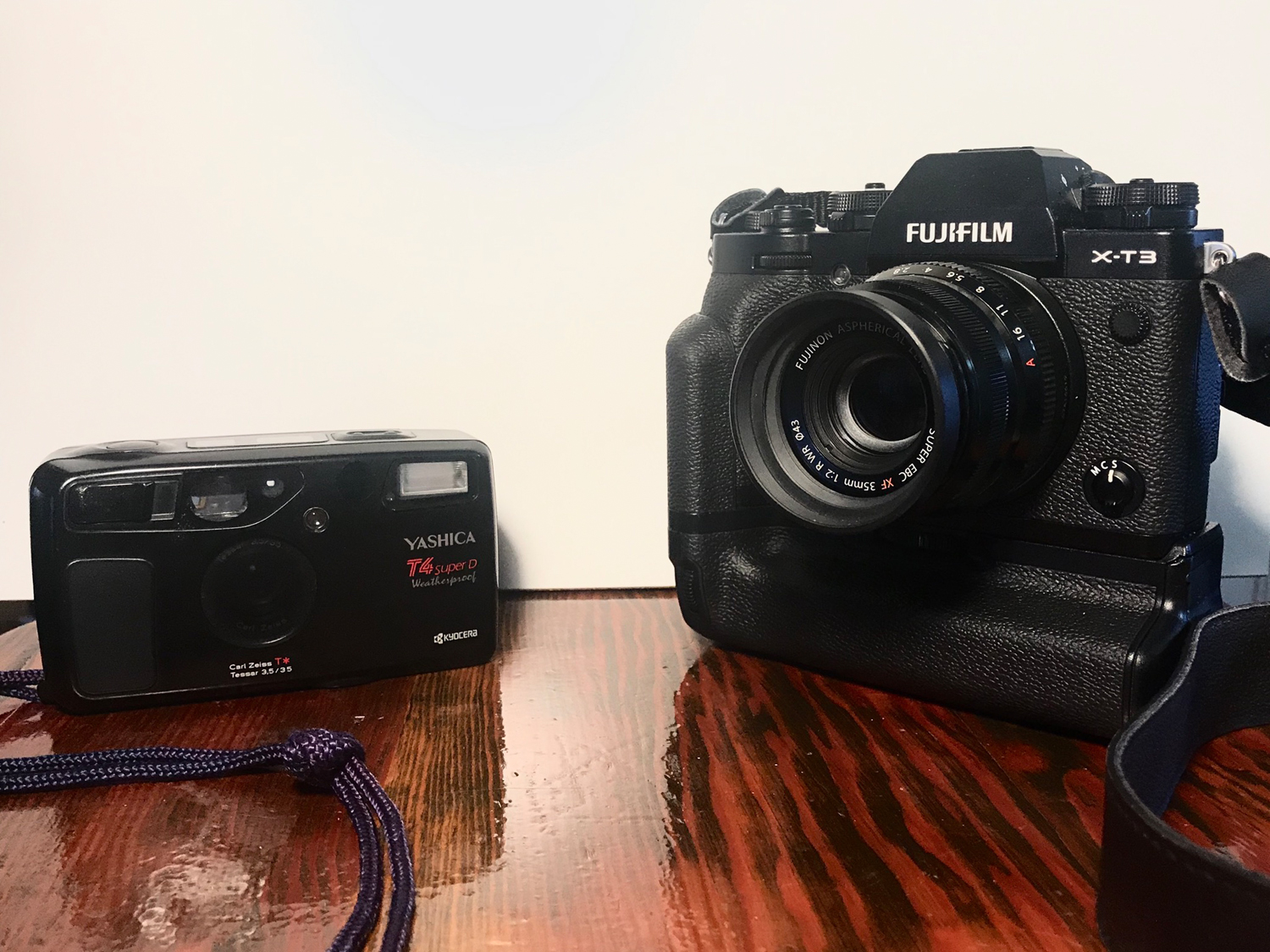 So one day when I was going to my local camera store to pick up some film I got developed I was looking around and spotted the Fuji X-Pro2 in this glass display and was amazed. It was like Wayne from the movie Wayne’s World seeing that Stratocaster and saying “It will be mine ohh yes it will be mine”.  I couldn’t believe it was a digital rangefinder that I could afford because up to this point Leica made the only digital rangefinder to my knowledge and that was out of the question.

So when I got home I was searching up everything I could about this camera. So I decided to trade in D7100 and lenses to get the X-Pro2 and 35mm F2. It was so surreal and felt perfect in my hands. The colors that Fuji cameras make stood out to me immediately and the fact that it has their film stocks built in nothing could top this for me. I loved shooting my QL17 GIII and think some of my best photos were shot with the rangefinder.

This became the only camera I had on me at all times and loving the challenge of making photos work with just the prime lens. Eventually I saved up and got the 16mm F1.4 that is remarkable. I put this setup to work and it never failed or let me down. I was absolutely speechless with the cameras low light capabilities and never had an issue with missing focus. I loved having the ability to switch back and forth with OVF and the EVF.

I grew to only use the EVF because being able to see what the image looked like while changing settings helped to be more in the moment instead of looking at the screen after each photo. I used this setup for two years and in December of 2018 questioned the idea of trading it in to get the X-T3. It was such a hard decision to make and if I should just wait till the X-Pro3 came out. But with a lot of research and comparisons I decided to do the trade.

Do I miss the rangefinder of course but it was definitely worth the upgrade to the X-T3 with the battery grip and kit lens. For a kit lens its really sharp and I find myself using it a lot. The camera with the grip just feels really good in the hand and isn’t overpowering in weight. A few new lenses will also be a goal for 2019 along with making photography a full time gig. I have only had the camera for less than a month and with the change of scenery of moving to Pennsylvania I’m ready for the challenge ahead to keep the creativity and explore new places!

“I’m a twenty seven year old self taught photographer who’s camera has literally become an everyday item I can’t leave the house without. I was born and raised in North Jersey about 45 minute from NYC but recently moved to the sticks of Pennsylvania. I’m currently employed as a… well you know I’m not sure what you would call it but I build and service in ground pools for a living. But in my free time I’m a freelance photographer who wants to make it a full time gig. I enjoy going out and exploring whether it’s hiking in the woods or through the city and documenting every step of the way. But in between those steps I like stopping at breweries, coffee shops, and new places to eat.”

"I’m a twenty seven year old self taught photographer who’s camera has literally become an everyday item I can’t leave the house without. I was born and raised in North Jersey about 45 minute from NYC but recently moved to the sticks of Pennsylvania. I’m currently employed as a… well you know I’m not sure what you would call it but I build and service in ground pools for a living. But in my free time I’m a freelance photographer who wants to make it a full time gig. I enjoy going out and exploring whether it’s hiking in the woods or through the city and documenting every step of the way. But in between those steps I like stopping at breweries, coffee shops, and new places to eat."

Posted on January 12, 2022January 12, 2022by Darren Pellegrino
It was 7am on a typical Summer Thursday. My weekday routine of which I enjoy and don’t usually tire is mundane but I don’t say that with disdain. I have always thought of the repe…
END_OF_DOCUMENT_TOKEN_TO_BE_REPLACED
Categories INSPIRATION

Posted on January 6, 2022January 6, 2022by fujixpassion
Hi everyone! Phil Porto is a name that every Fuji enthusiast knows. We had the privilege to publish an article by him some time ago. His work is incredible, and through his…
END_OF_DOCUMENT_TOKEN_TO_BE_REPLACED
Categories INSPIRATION

Posted on January 3, 2022January 3, 2022by Shinichi Kuroda
Hi Fuji X Passion, thank you for giving me the opportunity to share my passion and vision of photography. My name is Shinichi Kuroda. I’m Japanese and have been living in Briti…
END_OF_DOCUMENT_TOKEN_TO_BE_REPLACED
Categories INSPIRATION

Posted on December 28, 2021December 28, 2021by Christine Gabler
Hi, I am Christine, a photographer and creative girl with a passion for motorbikes and vintage cars based in Frankfurt, Germany. About five years ago, I was inspired to start phot…
END_OF_DOCUMENT_TOKEN_TO_BE_REPLACED