In the last two years many international design brands have chosen this location – in particular the tunnels/warehouses under the railway – as exhibition spaces during the Milan Design Week/Fuori Salone, one of the world’s largest design-related events.

Going North-East along via Ferrante Aporti and keeping the railway on the left, my photo tour dedicated to international design began. With me, sunglasses, business cards, the “old & tireless” Fuji X100 and three battery packs.

A large “slice of the world” opened up in front of my fixed 23mm lens: it’s Swiss, German, Spanish, Dutch, Brazilian, Japanese and Korean, and more. Among the various brands present, I recognized immediately the Yamaha Corporation Laboratory and the Swiss bags producer Freitag – the other exhibitors will excuse me, I’m not a design expert/savior.

I understood that I would take many shots during the sunny afternoon: all installations offered a 360° immersive experience which allowed to focus simultaneously  on visual quality, sound quality and intuitive interactions. That’s the photographer’s paradise!

The amount of input coming from each designer/installation convinced me to expand my range of possibilities and pushed me to shoot in color too. In some special cases – particularly when the composition of the frames plays on a broader range of chromatic nuances/levels – black and white vision might reduce the depth of field a little.

Despite this, black and white (in camera) retains an unattainable charm for me: for the series of shots dedicated to Yamaha’s “Pulse” exhibition – I especially liked the “puzzle wall piano” and the cocoon where you could snuggle up and play cello with a professional musician, two complete sound experiences thanks to which one fully enjoyed the differing perspectives of the players and the audience – I chose the monochromatic option. In my opinion, this is the only one which is capable of representing (by subtraction of info) the intangible emotion of sound.

In front of the fineness of the textures and the different color depths proposed by Dai Nippon Printing’s Innovative Design Center, even the most poetic black and white had to give way to color – I chose to shoot Velvia and Provia film simulations. The printed and illuminated panels were suspended in mid-air to keep company to groups of young ladies in kimonos ready to welcome visitors with cups of Japanese fine green tea.

Shooting across the panels allowed me – using just the installation lighting system – to create dream landscapes in addition to those of the original designers. Fuji X100’s wide range lens helps to create a sort of theatrical stage effect and to give centrality to all the amazing peripheral elements.

Some tricks were needed to get good & accurate shots: NEVER exceed ISO 500 – underexpose the shots; and, not least, let yourself be carried away by the atmosphere. Despite a not-so-super-fast autofocus (I chose not to update the firmware), the X100 has always been up to the task: JPG files are sharp while maintaining a considerable amount of shadows. I have also used part of the installations as additional photographic filters, as my photographer friend Federico Garibaldi taught me.

Japanese TAKT Project’s resin “Glow Grow” – the resin grows like icicles or like the natural forms within a limestone cave, showing various expressions through lighting, and growing into a new shape from the emitted light – became another “photo stage” which offered me the chance to cut out slivers of light in the dark.

While I was shooting I was in perfect harmony with the concept of the TAKT designers project: I was a part of a process of both artificial and natural integration that incorporated the principle of nature into artificial operation. This is it!

In front of Georg Lendorff’s “Unfluencer” for Freitag I deliberately lost control, to push (exposure setting: -2) my photography towards pure abstraction: the forest of transparent hanging threads on which images and lights were projected enhanced my imagination and distorted reality. What/which is really perceived and what/which is not? Perhaps some of my shots will solve the question…

And then, let me say it, during the Milan Design Week wandering with the coolest digital camera ever makes a certain impact! 40 megapixels and super-fast lenses & processors? No thanks, I prefer the super performing “vintage” digital. 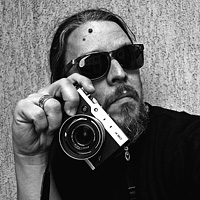 Matteo Ceschi - Milanese street photographer, essayist and journalist, writes for several magazines and has exhibited his shots in various locations. He is a member of f50/The International Photography Collective. His latest projects were in collaboration with English photographer John Meehan, founding member of the f/50 Collective, and with Italian fashion brand Lucio Costa. His latest exhibition "Ko.existence" (with the patronage of the Italian Embassy in Bosnia Herzegovina) was in collaboration with photographer Jim Marshall at Public Room Evergreen gallery in Sarajevo.

Posted on April 20, 2021April 20, 2021by Miro Maršík
Miro Maršík, music composer and producer, started using his images as covers for his music. Photography quickly became a passion, and with his X-T4, he captures wonderful landscap…
END_OF_DOCUMENT_TOKEN_TO_BE_REPLACED
Categories INSPIRATION

Posted on April 15, 2021April 15, 2021by Alwin Kok
First of all, I would like to thank Mr. Keitaro So, Divisional Head of Fujifilm for providing the loan for X-S10 and XF18mm F1.4. The units were loaned from Fujifilm Asia Pacific …
END_OF_DOCUMENT_TOKEN_TO_BE_REPLACED
Categories INSPIRATION

Posted on April 9, 2021April 9, 2021by Leroy Souhuwat
It is the year 2018, I moved to Iceland, the land of fire and ice. Everyone might know it holds astonishing beauty in its nature. That also triggered me in buying my first camera …
END_OF_DOCUMENT_TOKEN_TO_BE_REPLACED
Categories INSPIRATION

Posted on April 6, 2021April 6, 2021by Anh Vu Nguyen
My name is Anh Vu Nguyen, and I'm a 27-year-old mechanical/industrial engineer. I grew up and currently live in Pilsen, Czech Republic. As a second-generation immigrant from Vietn…
END_OF_DOCUMENT_TOKEN_TO_BE_REPLACED