Hi Luís! Thank you for all your availability for this interview. Could you start by introducing yourself to our readers?
Hello, I am grateful to be invited to give this interview to this distinguished magazine.

I am Luís Godinho, I was born in Angra do Heroísmo – Portugal, in 1983. And although holding a degree in Environmental Engineering and Management from the University of the Azores, I already have a vast curriculum as a photographer, focusing on Street and Documentary photography.

My work is internationally recognized by the editors of major photography websites and magazines, including National Geographic, Leica Fotografie International, Lens Culture, 500px and 1x. I’m currently living in Portugal on the Azores archipelago. I work as a freelance photographer all over the world.

Was it difficult the decision to leave your career as an engineer to become a full-time freelance photographer?
Since very young I had a passion for photography and I borrowed cameras to photograph. Later I went to take the Degree in Environmental Engineering, but it was at this point that I bought a camera a little better and began to photograph more and more.

Then the awards and highlights began to appear, more and more work and that was the point when I made an almost inevitable decision, leave engineering and become a full time photographer. At the beginning I traveled just a bit, also out of respect for my parents who had a lot of work to pay for my Degree.

Then I made a trip to Senegal, in Africa, to photograph a small humanitarian mission and I came from there with my head turned. It was the kind of photography that I wanted to make. A few months later I won the Sony Awards for Portugal and there was no return. It was the best decision of my life.

What is the basis of your success and what advice would you give to a young photographer about to make the same decision you made a few years ago?
I don’t care much about success. Nothing falls from the sky, it’s true, and I don’t lie that winning prizes and having all those highlights besides making the phone ring more often, also gives me pride and motivation to work more, but that is not what moves me. Being honest and always faithful to ourselves, I think it is a good beginning to achieve something.

I’m still very young and every day to me is new and I always learn a lot. The best way to be in whatever profession is to be open-minded, to be honest, responsible, and passionate about what we do. When we do it, we will never have to work, we will simply enjoy it.

The photographic projects you embrace are decided by yourself, by the publishers, or both depending on the specific situation?
It’s all decided by me. During the year I am asked to do several works and very diversified. But my documentary projects that I do throughout the year are thought and decided entirely by me.

What countries have you visited and what has struck you most, whether in a positive or negative way?
I’ve visited a few: Canada, Spain, England, Italy, Croatia, Bosnia and Herzegovina, Montenegro, Turkey, Germany, Austria, Israel, Palestine, Jordan, Dubai, India, Indonesia, Thailand, Morocco, Senegal, Guinea Bissau, São Tome , Mozambique, Colombia. Considering that I have visited India 7 times, it’s a country that always fascinates me. From the first time I went, I was impressed by the culture and the people.

There are countries with negative things but I always try to get the best of each one, only then you can assimilate the maximum of the culture of each one. Knowing to accept what each country or religion offers us, is one of the best ways to open our horizons and minds.

If you had to choose a project for 3 months, with all the necessary resources ensured, what would it be and where?
I would undoubtedly chose a country that had children at risk, hungry, sick, without access to basic necessities, without education, so that the photographs could then somehow alert, “shock”, inspire people to the inequalities that many still live in this world.

Because our readers are curious to know what equipment you use to produce this magnificent work, we understand that you started by using Canon and Leica, correct? How, from two very different systems, did you make the transition to Fujifilm? Could we say that the X-System brings together the best of your previous equipments?
I started in the digital age with a Fujifilm bridge. I then switched to my first Canon 450D reflex. Later I had a Canon 5D Mk II and an 5D Mk III. I then bought a Canon 1Dx that I still have but I hardly use it. I also had a Leica X2 but today I have a Leica Q. Fujifilm approached me about two years ago and I got an X-T2. I was amazed. I ended up selling the X-T2 and today I have two Fujifilm X-T3.

I must confess that it impressed me a lot, both in color and in the efficiency of the camera. Fast, simple, sturdy and wonderful lenses. Nowadays I use my two X-T3s for all my work. Being better or worse is always subjective, but I think that when you feel satisfied with the equipment you choose and it doesn’t compromise your work, it’s the most important.

For those who already own an X-T2, in your opinion, what are the main reasons for upgrading to the X-T3?
The X-T3 focuses a bit faster and performs much better. It’s an incredible camera.

If you had to go on a, let’s say, 7-day assignment with limited access to electricity and some hiking, what would we find inside your camera bag? By the way, could you show us a picture of it?
Surely! I would take my small bag with my two X-T3s, batteries, memory cards and an external disk for a fast backup of the memory cards. 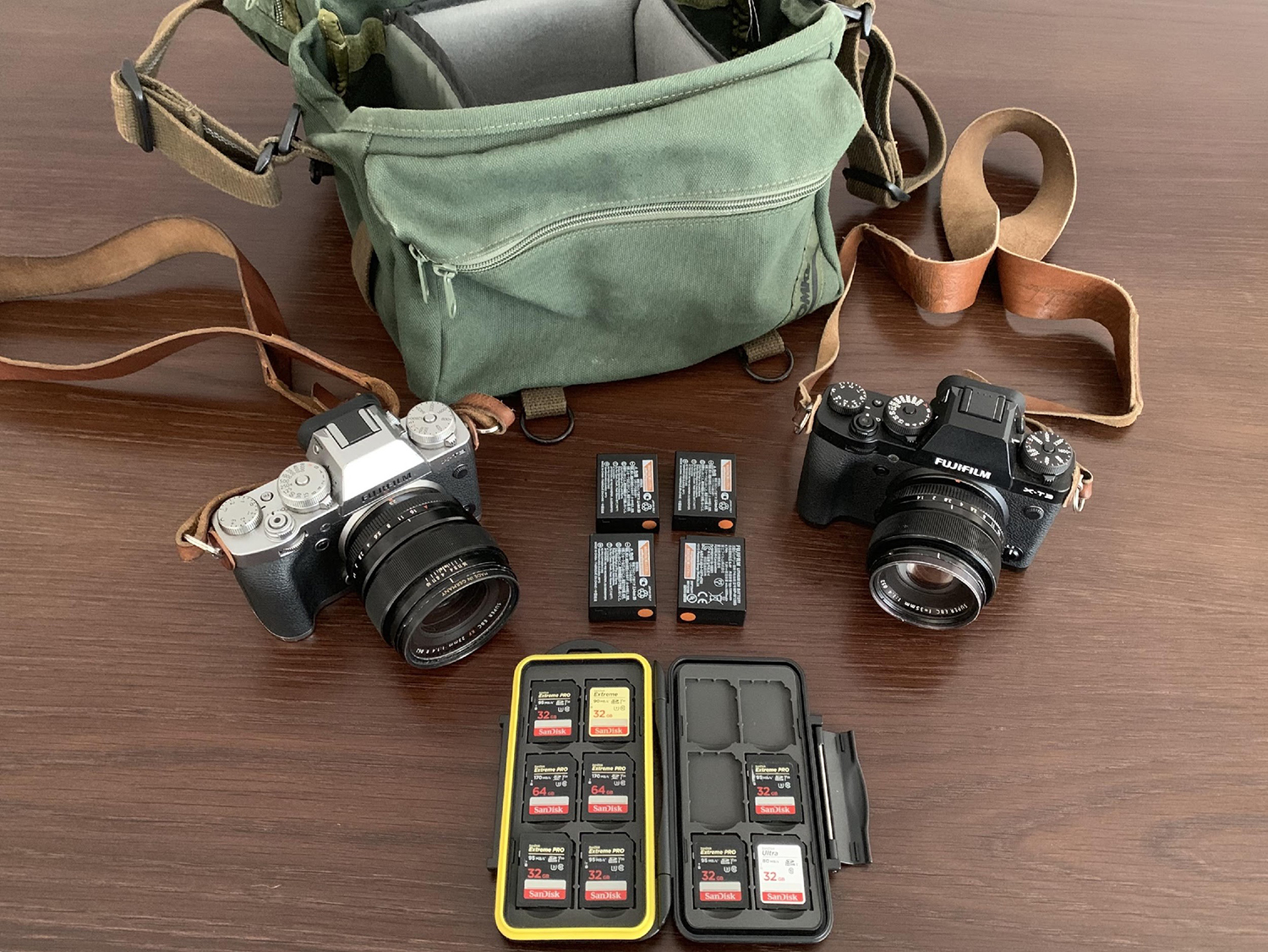 When you arrive to a new location with a particular project in mind, what is your usual approach and, when necessary, the process to get access to the somewhat more “closed” places and communities?
In my opinion I think the best to produce a good work, as genuine and true as possible, it’s important to know the place, the people and everything that involves these two factors. Sitting, talking, eating, drinking etc. I think it’s the best approach in order to almost feel at home and for people to gain confidence.

Later, everything becomes easier and they end up “forgetting” that you are there. It’s important not to have an “aggressive” approach. Often you can’t just get to a place or people, for various reasons. Then we have to hire a fixer to take us to that place or even to translate the local languages.

To conclude, would you like to leave any last words to our readers, or share some interesting/funny story that happened to you on your travels?
Sometimes, wanting to tell stories has its risks, but being in a world different from ours is also good to know other realities and other people.

In 2018 for example, I was in Mozambique to photograph a few kids in a dump,  and I had a complicated situation when I realized that I was photographing in a clandestine place, where some men appeared that made me perspire and shake a little. I ran the risk but it was worth it for the photographs I took and what I got from them. In other cases, we usually know good people, and we share life experiences that I think are very important.

To conclude I would like to thank once again for the invitation to this interview and say that if you have dreams don’t let them go unfulfilled, fight for what you believe in and you will always be happy.

Luís Godinho, born in Angra do Heroísmo, in 1983, holds a degree in Environmental Engineering and Management from the University of the Azores and, already has a vast curriculum as a photographer, focusing on street photography and documentary photography. He has become a professional photographer since 2017.
His work is internationally recognized by the editors of major photography websites and magazines, including National Geographic, Leica Fotografie International, Lens Culture, 500px and 1x. Luís is currently living in Portugal on the Azores Islands. He works as a freelance photographer all over the world.

www.luisgodinho.com/
Premium/ Why I love Fujifilm Premium/ Documentary Project | Module 4 – The essential accessories you may need