Every time Fuji releases a new camera I think this is the generation that will let me leave Canon behind. I had the same hopes and eventual disappointments with the X-T2 and the X-T3.

Inevitably, I would realize full-frame always beats out cropped sensors, that high ISOs and battery life can’t be matched, that Fuji was just not good enough to beat my Canons. But none of this was the real problem. The problem was me.

Shooting with the X100V is a breeze. It feels like an extension of the eye and of the hand. Its autofocus is snappy, the buttons feel good, it’s so light it’s hardly there. I find myself taking chances and landing them. Some photos are out of focus and yet it doesn’t matter.

Shooting in the Classic Negative picture profile, the photos seem like old memories magically appearing in an instant. Real-time nostalgia. The magic of photography, simultaneously freezing time and making you aware of it, methodically placing the present in the past.

I once met a photographer who only shot with a 35mm lens and I never really understood it. I never felt the way he did with my Canon and the insanely good 35 1.4 II. It was just too heavy, too long – dare I say – too shallow. Yet the 35 on the X100V feels familiar and at home. It feels effortless and natural.

A lot of the kinks have been worked out since my last X100 series camera, the X100S in 2013. That camera was beautiful and took great photos, I remember being amazed at the colors of the jpegs straight out of the camera and how little I needed to do to them.

But it would also freak out and miss focus stopped down in the middle of the day, which I forgave in the spirit of “slowing down”, a nice way of saying you don’t like things working painlessly. To be fair, the X100S was a reminder to shoot simply, not to overcomplicate.

This is the lasting ethos of the Fuji cameras for me, the type of camera I would take on a long trip or on a short walk, or the desert island fantasy gear set up (along with 1,000 batteries). The Fujis have a soul and remind me that I have one too.

Sometimes I take the X-T3 along on bigger shoots with lights and stands and setups just to remind myself to shoot with a 50mm by a window. Usually, that shot doesn’t make it to print, but it serves as a humble reminder to not overthink. A reminder not to get too lost in settings, focal lengths, adjustments.

And that’s the irony of the little X100V, now with Classic Negative. I used to play with presets on VSCO, dutifully degrading the raw image to make it feel human, whether shooting on an iPhone, mirrorless or DSLR. Now with this simulation, it feels like I don’t have to think anymore, I just press the button and turn the dials and get what I get.

Overexposed and underexposed sometimes just works as is, no need to “fix” it. That’s what we all loved about film, right? The happy accidents. One time the teeth of the advance gear ate through my roll of film and the footage got split between Massachusetts and Hong Kong, resulting in imperfectly double-exposed pictures.

Some frames were split over two others and the result was neon signs over frozen puddles, city chaos over singing country birds at dusk, it was the best I could have asked for from either of those places. It was better than asking, it was just receiving the blessings of the film gods, a roll of the dice.

Now, this camera is not as surprising, let’s be honest. It’s still a digital camera. But when I look through the viewfinder, I like what I see. The world feels a little more cinematic, the shadows and highlights more interesting, shapes more alluring. It reminds me of Garry Winogrand’s quote “I photograph to find out what something will look like photographed”.

Fuji has won me over with the EVF, which seemed blasphemous when it first came out. Through the EVF the world actually does look like a movie as the film simulation overlays over reality. Now I realize this is what I was looking for all along – it wasn’t just cleaner ISO at spectacular levels or endless battery power, it was a connection to what I was seeing. Where the Fuji falls short of a 5D, it makes up with soul. It evokes so much feeling that I can’t help but long for it in a way I will never feel about a DSLR.

Now shooting with the 5DIV, I appreciate its natural, neutral way of being. The colors are faithful and true, but it feels lacking in character. If there’s anything that Canon really excels at its hardware. Beautiful, durable and well thought out physical objects that are easy to learn and can be operated in extreme situations almost without thinking. The Fuji takes more time, more fiddling, but it has some kind of life in it that can’t be ignored.

On days off and in between assignments I like wandering the streets to see what I can find and a smaller camera has allowed me to walk farther and longer. I discovered this covering the protests in Hong Kong which some days ended up being 15 miles of walking, waiting for a picture. Just switching from two 5DIVs to 2 XT3s made a huge difference and I could devote the energy to shooting rather than carrying.

Back in New York, I’ve come to appreciate how stealthy the Fujis are. People react differently to them and I’ve been asked more than a few times if I’m shooting film, which seems to put people at ease. My personal theory is that the act of looking at the back of a screen creates a specific kind of jealousy in the average pedestrian. They become angry because you are able to see them in a way they can’t.

By photographing through the EVF I do not need to review the image, I know more or less that I’ve gotten it and if I really want to review it I can do it in the viewfinder. Sometimes I keep the camera to my eye as the person passes me and they eventually give up on the idea I’m photographing them and move on.

The flip screen has also been a surprisingly useful feature – being able to shoot reliably and discreetly from waist level is like a mind trick for modern street photography. The world seems to have internalized Susan Sontag’s idea of photographer as hunter, face obscured by the camera, and when one goes through that physical motion of raising a camera, people tense up.

Sometimes the person isn’t even looking, but their peripheral vision picks up the motion of a camera moving from chest high to eye level and they will immediately make eye contact, look away, walk away. Worst of all, they stop doing whatever they were doing that was interesting to photograph.

This is, of course, ironic in the days of constant surveillance whether it be city controlled traffic cameras, police surveillance, local business cameras recording entryways, exteriors, interiors, tracking data and the average citizen constantly facetiming, live videoing, Instagramming. Out of all those digital predators, people are afraid of the lone street photographer pointing the camera at them, seeing what they cannot see.

The flip screen is the strangest work around and I’m still marveling at how well it works. People are so used to seeing others walk zombie-like through the city starting at their phone that they are virtually oblivious to a photographer, crook necked, looking down at a flip screen, snapping away.

It’s astonishing how close I can get before a sense of suspicion creeps in and even at that point how quickly people seem to dismiss me because I’m looking down and they can see my face. There are even more elaborate ruses, holding a cell phone next to the camera looking lost, using the phone as a remote trigger, or just an old fashioned wire remote trigger.

There is always a honeymoon period for me with any camera. The excitement and promise of a new camera grows and then the feelings fade and the next thing comes along. While the older cameras do not excite as they once did, they are used and worked until exhaustion. Rarely can I even sell them when they are ready to retire due to their cosmetic condition.

Recognizing the insanity of short product life spans and gear lust, I even began watching gear reviews of cameras I already owned, which is a reminder that I was once head over heels about the camera I already own. I know that gear will only take us so far–in the end it’s just a tool to be used like any other. But some tools are more fun than others and the X100V feels less like a utilitarian workhorse (I hate that term). This feels like falling in love again. 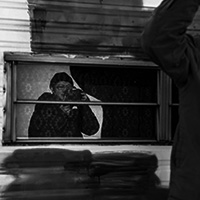 Stephen Yang is a freelance photojournalist from New York City. Along with covering day to day news and features in New York, he has spent time covering the Standing Rock Sioux Tribe in North Dakota, social uprisings in Hong Kong and Baltimore, and hurricanes in Florida and Puerto Rico. Stephen’s work has appeared in The New York Post, The New York Times, Reuters, The Wall Street Journal, Bloomberg News, Der Spiegel, and Newsweek among others, and his archive is syndicated by Redux Pictures. When not shooting, he is usually trying to find a better sandwich and spicy Chinese food.

Stephen Yang is a freelance photojournalist from New York City. Along with covering day to day news and features in New York, he has spent time covering the Standing Rock Sioux Tribe in North Dakota, social uprisings in Hong Kong and Baltimore, and hurricanes in Florida and Puerto Rico. Stephen's work has appeared in The New York Post, The New York Times, Reuters, The Wall Street Journal, Bloomberg News, Der Spiegel, and Newsweek among others, and his archive is syndicated by Redux Pictures. When not shooting, he is usually trying to find a better sandwich and spicy Chinese food.

The day I held the camera on the streets!

Posted on May 27, 2020May 27, 2020by Kanishka Sarangi
There are numerous genres in photography, and with the advancement in time,  we see a particular genre to evolve and differentiate into a new one. Photography perse still rem…
END_OF_DOCUMENT_TOKEN_TO_BE_REPLACED
Categories INSPIRATION

Posted on May 22, 2020May 22, 2020by Alessia De Angelis
Summer is around the corner and here in London is sunny as it’s never been before. The pandemic is forcing us all home, but so far I have had the strangely relaxing feeling that I…
END_OF_DOCUMENT_TOKEN_TO_BE_REPLACED
Categories INSPIRATION

Posted on May 17, 2020May 15, 2020by Robin Benzrihem
When it comes to photography, Iceland is a mix of what one would expect from the breathtaking pictures that can be found online. However, sometimes, even expectations aren’t enoug…
END_OF_DOCUMENT_TOKEN_TO_BE_REPLACED
Categories INSPIRATION

How the Fuji X100V can help you be a better photographer

Posted on May 15, 2020May 15, 2020by Jerred Zegelis
The Fuji X100V embraces and celebrates the Fuji philosophy: that cameras are more than just image makers. More than any camera I can remember using, the X100V is simply enjoyable …
END_OF_DOCUMENT_TOKEN_TO_BE_REPLACED