When it comes to photography, Iceland is a mix of what one would expect from the breathtaking pictures that can be found online. However, sometimes, even expectations aren’t enough to prepare you to shoot the country’s landscapes.

My name is Robin Benzrihem, and I have used Fuji cameras for about five years. My entry into the Fuji X family was the first Fujifilm X100, that I bought used in the Fall of 2015. This is certainly the camera that taught me most of the basics of how a camera works, but also of composition, because of its fixed 35mm equivalent lens.

Because of its wheels and dials, the X100 was a very fun camera to learn from, as you have a very concrete and live sense of everything you’re doing while using it. Back then, I lived in Austin, Texas, and my experience of the city and its state have definitely shaped the way I take pictures.

I had this camera at all times with me for well over a year, either strapped on my shoulder or available in my backpack whenever I needed it. The streets of Austin, the architecture of its buildings, but also the landscapes of the Hill Country and of the deserts of West Texas forged the way I aim and take photos, particularly to go beyond the rule of thirds and embrace more minimal and symmetrical views.

The Learning Curve
Over a year later, in late 2016, after I moved back to Paris, I switched to the Fujifilm X-T2, which allowed me to gain even more control over what I was doing. Overall, the X-T2 was more responsive than my old X100, and I quickly realized how useful some of its specificities, such as the tilt-screen or the interchangeable lenses were, compared to my previous camera. I took it with me to a variety of destinations in Europe, from Portugal to the UK, the Netherlands, and the South of France, while practicing on a daily basis in the streets of Paris.

Until the beginning of 2019, I used the Peak Design 30L Everyday Backpack as well as the 5L Everyday Sling. These two bags proved to be enough to bring my X-T2 with the 18-55mm f2.8-4 kit lens along with the 23mm f2, along with a minimal 4 to 5 days set of clothes. While I used the 23mm for my street photography, the kit lens was for all of my landscape pictures.

With the X-T2, I learned how to take long exposures, or when I couldn’t because of the sunlight, to take a series of shots and blend them together in Lightroom to give the impression of a long exposure. Eventually, to make things easier in my landscape photography, I felt the need to acquire the Joby GorillaPod along with a variable ND filter for my kit lens.

For my Iceland summer trip, the goal was to buy a wide lens and possibly a telephoto lens to be able to get a large variety of pictures. However, in February 2019, my backpack was stolen, with my X-T2 and the 23mm lens as well as my laptop in it.

Thankfully, a couple of friends decided to launch a GoFundMe to help me get enough money to buy a new camera. Within a week, thanks to friends, family, friends of friends and even Instagram friends I still haven’t met, I had enough money, either to buy back my X-T2 and the 23mm lens, or upgrade for an X-T3, with the lens. I opted for the latter option.

Having to reinvest into what I had lost prevented me from buying the 55-200mm lens I wanted for my trip to Iceland, but in the end, it was certainly for the best, as I rarely had to change lenses during my trip. My whole setup for my Iceland summer trip consisted in a Fujifilm X-T3, the 18-55mm kit lens, a Samyang 12mm f2 lens for wide shots, which I actually did not use that often, the Joby GorillaPod, a variable ND filter, along with four spare batteries, just in case I would be unable to charge them for a few days in a row.

In terms of camera carry, I used a regular Salomon 30L backpack, onto which I installed the Peak Design Capture Clip, which was perfect to avoid hitting your camera against rocks or trees while hiking. This setup was great for my day hikes because of how light everything was, while being big enough to fit my camera, another lens, a tech pouch, my tripod, a spare jacket, food and a water bladder.

The Fujifilm X-T3, a landscape beast
The light weight and small size of the camera compared to DSLRs was certainly an advantage over the few day-hikes I was on over the 18 days I spent in Iceland. The customization of the function buttons really helped me get the results I wanted without losing too much time in the menus.

While the dials are fun to use, I realized that applying the wheels in the front and the back of the camera to ISO and speed not only gave me more subtle control over these settings, but also allowed me to change them with just one hand without having to take your eye away from the viewfinder. It’s especially efficient when you are trying to take pictures of wildlife under the harsh sun. With the same logic I moved the review button to the one in the front in order to find it more easily than where it is originally positioned right next to the viewfinder.

In terms of image quality, I had already been pretty happy with that of the X-T2, but the X-T3 delivers even more! The dynamic range was especially impressive. In Iceland in August, you never get complete darkness, which means that if you get sunny weather, which was my case for 16 out of my 18 days in the country, you have very dark shadows and very bright light at the same time.

I had several tricks to expose correctly. Setting my ISO at 400 allowed me to put my dynamic range at 200, but when it wasn’t enough, I took several pictures at different exposures, which I subsequently stacked in Lightroom. This trick was especially useful during golden or blue hour, which does happen in Iceland in August, as well as when I was shooting waterfalls, to make the water super creamy.

The last instance when I used the exposure stacking technique was when there were too many tourists in my scene. While there are only about 360.000 people living in Iceland, there are as many as a million tourists each year on this island the size of Portugal, so stacking the photos together did allow me to make people “disappear” peacefully when selecting the right option in Lightroom.

Overall, while I do wish I had a telephoto lens, especially in the mountains to compress the perspective, or just a weather-resistant lens around waterfalls on this trip, the X-T3 with the 18-55mm and the Samyang 12mm performed admirably. I never used all of my batteries, even when I could not charge them for a few days, and I believe the images here show that you can obtain great results just with the kit lens, if travelling light is what matters most to you. The gorgeous landscapes of Iceland are partly responsible for it, but the quality, the build and the features of the X-T3 also definitely made all of this possible. 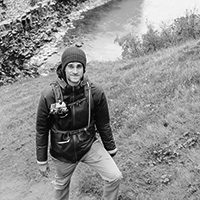 “My name is Robin, and I am torn between landscape and street photography, as I live in Paris, France, but I love leaving the city to spend time surrounded by nature. I am also a teacher but I spend more and more time focusing on my photography.”

"My name is Robin, and I am torn between landscape and street photography, as I live in Paris, France, but I love leaving the city to spend time surrounded by nature. I am also a teacher but I spend more and more time focusing on my photography."

Posted on July 4, 2020July 3, 2020by Thomas John
Currently, I happen to have both these cameras at home so I thought this is a good opportunity to do a small comparison – between the first and the current incarnation of Fuji’s E…
END_OF_DOCUMENT_TOKEN_TO_BE_REPLACED
Categories INSPIRATION

Slowing down is fun

Posted on July 7, 2020July 7, 2020by Mustafa Bastaki
Hello all. My name is Mustafa Bastaki and I’m a street and freelance photographer based in and from Bahrain, also an Engineer-to-be and a Fujifilm X-Photographer and Official Bran…
END_OF_DOCUMENT_TOKEN_TO_BE_REPLACED
Categories INSPIRATION

Posted on July 9, 2020July 8, 2020by Alwin Kok
Before having a Fujifilm camera in my arsenal, little did I know that "colour" actually plays an important role in my photography life, and that is motivating me to shoot. Why do …
END_OF_DOCUMENT_TOKEN_TO_BE_REPLACED
Categories INSPIRATION

Posted on June 25, 2020June 25, 2020by Stefan Panaitescu
When I switched from Sony to Fuji, I had no idea how much photography would actually grow on me. Of course, I wanted to get better and take nicer shots, but since that first tr…
END_OF_DOCUMENT_TOKEN_TO_BE_REPLACED