Like many people I suppose, I had in my head a list of a few countries in which I wanted to travel. And Thailand was certainly not one of them. I don’t know if it is because of our life close to nature and the mountains, but when I thought of travel, I imagined beautiful landscapes, mountains, cold, adventure. The first countries that I thought of and that attracted me were Iceland, Tibet, Norway, Canada… The culture of the country did not really matter to me, it came second.

And then, when we finally had the opportunity to go on a trip, we first thought “travel with family and children”. We were trying to teach them values ​​we believe in: curiosity, tolerance, open-mindedness … And we said to ourselves that it might be good to put images on all this. To open them to the world by making them discover another culture differently than on paper or screens. By going to see how people and especially other children live elsewhere in the world.

What was not very important to me when I thought “travel” has become my number one priority in choosing our destination.

We had the opportunity to leave in April 2017. My girls would miss a few days of school, but we sincerely believe that this kind of trip for a child is more rewarding than a few days of school. Even if French national education sometimes thinks otherwise…

After several discussions with friends knowledgeable about Asia and a lot of research on the internet, we chose Thailand: a radical culture change and a very reassuring country. For a first trip with children, this destination seemed perfect!

The time we were going to leave was quite hot in Thailand. Especially in the north of the country. So, we decided not to go there and focus on the center and the south of the country. By taking our time and not running so as not to disgust the children with endless visits and too long journeys.

We had just booked the first hotel when we arrived in Bangkok to allow us the freedom to change our trip at any time. And even if we had most of the trip in mind, we wanted to leave it up to improvisation and to be able to change our plans at the last moment.

We tried to leave as light as possible. A big bag each for my partner and me and two small bags for the girls. I would take a light backpack for day trips that would contain my gear: an X-T10 and three lenses, the XF35mmf2, the XF23mmf2 and the XF14mmf2.8 as well as a small tripod.

We arrived in Bangkok on April 11 in oppressive heat. The change in temperature and humidity was very difficult to manage for the smallest of my daughters, who was sick the day after our arrival. After a little morning in the hospital, she was much better and were ready for the rest of our trip.

We stayed for four days in Bangkok, and I think I could have stayed there for three weeks if I had traveled alone. I fell in love with this capital just by crossing it to join our first guest house in the city center.

This city is crazy. Its old neighbourhoods with narrow streets, it’s street food, its large futuristic shopping centers served by the sky train, its floating markets and its klongs, its majestic temples. We go from the old world to the future in a few dozen meters. This city is bubbling. It lives 24 hours a day and I took a monumental slap during its four days. So much so that we returned to Bangkok earlier than planned at the end of our trip in order to spend a few more days!

After Bangkok, we went to visit Ayutthaya and its ancient temples. Then a national park in the east of the country to try to spot wild animals and especially elephants.

We planned next to go to the west of the country, but we changed our mind because of too long trip times. So we went south to enjoy the beaches around Krabi.

We have fallen in love with Railay and its cliffs.

We have been disappointed and a little disgusted with mass tourism around Ko Phi Phi, even if we participated too… These islands are in disaster if tourism continues like this, but it seems that Thailand has finally become aware of it and now try to regulate tourism in this heavenly place.

And we met great people, full of affection and, yes, they never stop smiling.

Then we headed south-east on the island of Koh Samui, before going back a few days to Bangkok for the end of our travel.

We were a little worried about the routes inside the country. Indeed, Thailand is reputed to be a country with a lot of traffic accidents. We travelled in the country by taxi, by plane, by train, by tuk-tuk, by boat without knowing the slightest concern, without seeing the slightest little accident, even if my partner has made a few scares. Particularly a stressful journey behind a pick up on a kind of highway without belts or protections. Or a big rainstorm in the middle of the sea on a long tail boat. And trips in threes on scooters without helmets. She is very concerned about safety in transport, and she has made a lot of effort during these three weeks.

For us adults, memories are still very much present. My oldest daughter dreams of going back. And for the youngest who was only five years old during the trip, she has already forgotten a lot; except the smells she talks about regularly and some highlights.

And when the memories are erased little by little, there will remain these photos at the bottom of a hard disk and this little book in the bookcase that will bring us back there… 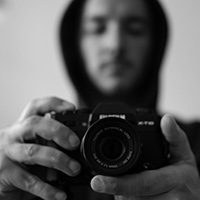 “I live in a small town in the South of France. I am the father of two girls. I constantly try to juggle between my work, my passion for photography, and my family life. I tell a lot of stories on my blog.”

"I live in a small town in the South of France. I am the father of two girls. I constantly try to juggle between my work, my passion for photography, and my family life. I tell a lot of stories on my blog."

Posted on June 11, 2020June 9, 2020by Marcelo de Coghlan
I give thanks every day since, in this life of troubles and commitments, I can carry out many activities that I am passionate about. In these quarantine times, these things are no…
END_OF_DOCUMENT_TOKEN_TO_BE_REPLACED
Categories VISUAL STORIES

Posted on May 25, 2020May 26, 2020by Marcelo de Coghlan
It is one of the few moments that I did not have my camera with me... Two days before the quarantine began, my dog ​​Chops got sick, we did everything, everything, everything, to …
END_OF_DOCUMENT_TOKEN_TO_BE_REPLACED
Categories VISUAL STORIES

An adventure worth having

Posted on May 20, 2020May 20, 2020by Jerred Zegelis
I’ve lived in Nebraska my entire life, going on 45 years now.  Nebraska is situated right in the middle of America, and there was a portion of my life when I wanted so badly to mo…
END_OF_DOCUMENT_TOKEN_TO_BE_REPLACED
Categories VISUAL STORIES

Posted on May 13, 2020May 13, 2020by Intrepid Nomads
It’s difficult to understand the real motivations that led us to go to Hawai’i. If you think carefully about it, they’re one of the most remote islands. At 8000 miles of distance …
END_OF_DOCUMENT_TOKEN_TO_BE_REPLACED