Currently, I happen to have both these cameras at home so I thought this is a good opportunity to do a small comparison – between the first and the current incarnation of Fuji’s E-series bodies.

The X-E1 came out in late 2012. It was the second Fuji X system body of them all, after the system was launched with the X-Pro1 earlier the same year. In late 2013 it was replaced by the X-E2. From then on, it took another four years until, in October 2017, the first X-E3’s hit the shelves. (Yes there was an X-E2s but that was, in fact, just an X-E2 with a substantial firmware update and a very few cosmetic changes.)

On these pictures, both bodies are seen with a lens of the same vintage – the 27/2.8 pancake is an older release from 2013 whereas the 23/2 appeared in 2017. Of course, all Fujinon X system lenses work on all Fuji X system bodies without any issue.

Today, you can pick up a Fuji X-E1 on the used market for maybe 150 or 170 Euros here in Germany, whereas the asking price for a new X-E3 is 599 Euros. That’s more than 400 Euros difference. In fact, the X-E1 currently is the cheapest Fuji body (with built-in viewfinder!) that you can get at all. The camera you see on these pictures belongs to a good friend of me who just kept it alongside his newer bodies, and I could borrow it for a couple of weeks when my newly acquired X-E3 had to be sent in for a warranty repair.

So I gained some experience now with the old X-E1. Many of my recent blog postings featured the X-E1, such as Merry Christmas 2017, Olympus PEN Zuiko lenses for Fuji: Part 1 – Introduction, Part 2 – The 38/1.8 and Part 3 – The 100/3.5. They are all a testament to the X-E1’s great image quality and overall nice handling.

But when I picked up my X-E3, I was instantly reminded that this was the Fuji body that I felt in love with! But let’s just see what differences and what similarities the two cameras share, below.

What are the differences, performance-wise?

1. Obviously, the sensor. The Fuji X-E1 offers 16 MP, the X-E3 24 MP.
I have to say that the image quality of the X-E1 still can keep up well, but the difference in resolution can be felt if you want to print large or if you want to crop in post-production. Here I did a direct comparison shootout between the two.

2. The Fuji X-E1 does not have yet a phase-detect autofocus system.
As such, it can only measure contrast of a given scenery but has no clue how far subjects are or in which direction they move. In practice, you’ll be fine with AF-S and in daylight, if you are not a real action photographer. I never found the X-E1 really lacking here. However, don’t even dare to compare AF-C between these two bodies. No contest.

3. If you like to use manual lenses, the Fuji X-E3 makes it really easier for you.
First, it offers additional focusing aids such as Fuji’s unique digital split screen. (This is impossible on the X-E1 as it needs the sensor’s phase-detect pixels to work.) Also, the viewfinder magnifying function offers a clearer image, especially in low light conditions, and even the focus peaking feature that both bodies offer, works better with the X-E3. Your mileage might vary, but I actually find this is one of the big differences between the two bodies in practice.

4. The Fuji X-E1 struggles in really low light.
If you, for example, take night shots on a tripod. The viewfinder image gets coarse, the autofocus often does not work any more, and you can also forget to use the magnifying function to achieve focus. The X-E3 just has many more reserves here. This is not about image quality – both bodies deliver very good night shots – but more about handing and about the viewfinder image.

5. The Fuji X-E1 does not offer ISO 100 when shooting in RAW.
I know that the sensors of both cameras operate with ISO 200 as their native sensitivity, but if you want the best possible output with really clean shadows, switching to ISO 100 still can help.

What are the differences, body-wise?

What’s the same between the two?

As you can maybe already guess by reading through this blog post, most of the differences are rather subtle. Personally, I’d rate these four points the most important for me:

Are these points worth more than 400 Euros of price difference?

Truth is, you can only answer that for yourself. Even the Fuji X-E3 is not exactly “expensive” when it comes to state-of-the-art mirrorless camera bodies. Yet, the X-E1 is a real bargain. There is no arguing around that. If you want to save money and thus not get the new X-E3, I’d personally jump to the X-E1 (and not the X-E2 or X-E2s), because here you’d save the most. 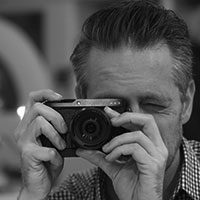 “My name is Thomas C. John. I was born in 1975 and have been crazy about photography since I am 6 years old when my older brother handed me over a Kodak pocket Instamatic camera. I’m working in content creation for websites, infotainment apps and other media and currently live in Cologne in Germany. I do photo assignments as well as dive deeply into my personal photo projects. To give back something to the great photography community out there, I recently started my own YouTube channel. Maybe I belong to the last generation that learned photography when it still was a totally analog process. So also analog still feels very natural to me and continues to be an important part of my creative work.”

"My name is Thomas C. John. I was born in 1975 and have been crazy about photography since I am 6 years old when my older brother handed me over a Kodak pocket Instamatic camera. I'm working in content creation for websites, infotainment apps and other media and currently live in Cologne in Germany. I do photo assignments as well as dive deeply into my personal photo projects. To give back something to the great photography community out there, I recently started my own YouTube channel. Maybe I belong to the last generation that learned photography when it still was a totally analog process. So also analog still feels very natural to me and continues to be an important part of my creative work."

Posted on December 30, 2020December 29, 2020by Alwin Kok
Disclaimer: This is not a sponsored post by the lens manufacturer. I paid for this lens from my own pocket. This is purely my own opinion about this piece of wonderful glass, and …
END_OF_DOCUMENT_TOKEN_TO_BE_REPLACED
Categories GEAR

Posted on December 22, 2020December 22, 2020by Miles Witt Boyer
The camera world has been completely turned upside down in the last few years and though about 90% of the content we create is written to prospective brides or clients, every once…
END_OF_DOCUMENT_TOKEN_TO_BE_REPLACED
Categories GEAR

Posted on November 28, 2020November 27, 2020by Paul Marshall
So the battle of the sub f/2.0 portrait lenses for the Fujifilm X series is heating up with some of the best lenses I have used to capture anything from my son to a CEO of a huge …
END_OF_DOCUMENT_TOKEN_TO_BE_REPLACED
Categories GEAR

Posted on November 25, 2020November 25, 2020by Alwin Kok
Yes, this is probably my shortest hands-on experience with the lens. First, as of this moment, Fujifilm is still struggling to supply this wonderful XF50mm F1 lens to the hands of…
END_OF_DOCUMENT_TOKEN_TO_BE_REPLACED