It is slow, it has its quirks, but one thing is for sure, no one can remain indifferent to the Fuji X-Pro1. And maybe that’s why, eight years after its launch, it remains a highly sought-after camera that has won a special place in everyone’s heart, even those who already own the X-Pro2 and 3.

Hello all. My name is Mustafa Bastaki and I’m a street and freelance photographer based in and from Bahrain, also an Engineer-to-be and a Fujifilm X-Photographer and Official Brand Ambassador. I started my journey into photography back in 2011 using just an iPhone 3GS, chasing and shooting sunsets almost every week. I’ve used several mediums and brands from Nikon to Sony, until settling down with Mirrorless systems in 2014, specifically with Fujifilm.

I first fell in love with Fujifilm after the release of X-Pro1, back in 2012, which is the main subject of this article. I’ve always had a thing for the X-Pro1, but couldn’t afford it for a first camera purchase.

My first Fujifilm camera was the X-T1, bought in 2014, and the last camera is the X-Pro3, which is my main workhorse camera.

I started street photography back in 2013, which my main genre in photography. Before trying it out, I always got anxious about holding my camera (which was a Nikon DSLR and a 50mm lens) and pointing it at random people, knowing they would notice me in the streets and react negatively. So, I finally tried it out and let go of my fear and have been enjoying it ever since.

Being inspired by the photography greats, such as Henri Cartier-Bresson, Fan Ho (Who’s my greatest influence and inspiration on street photography) and Robert Capa, I tried to go out and shoot very often and try to see the world around me the same way they did and failed initially because of lack of practice.

The X-Pro1 is a camera that was always on my mind, even though I owned cameras that were technically much superior in terms of features and performance, but that never stopped me of owning one because it has always been a camera I wanted to own and shoot with. It slowed me down a lot, and again, that never gave me second thoughts about using it.

Around 2 years back, I was going through the used camera’s options on eBay and coincidentally found an X-Pro1 being sold for a very reasonable price. Never have I tapped on my mobile screen so quickly.
It arrived in the mail after that by two weeks and seemed like a brand new camera, so I directly attached my 7artisans lens and went out to test it out.

I’ve used it with several Legacy and vintage lenses, such as: Carl Zeiss 35mm F2, Helios 44-4 58mm F2, Canon FD 17mm &85mm 1.4, and Minolta Rokkor 58mm F1.4 and have fallen in love the quality I’ve been getting from the first-gen sensor.
Because of it being slow, I used it just like how I use my film cameras: fully manually!!!

After purchasing the X-Pro3, the latest and most advanced of the X-Pro lineup, the X-Pro1 still is on my mind, and I always have a smile on my face when looking at it now, knowing I couldn’t afford it when it was released around 8 years ago.

I have always had G.A.S. (Gear Acquisition Syndrome), which basically means you get the urge of purchasing more and more gear. I used to carry around a bag full of lenses and end up using just the lens on the camera, something that my friends usually laugh at. I’ve learned the hard way that all you need is just a one camera one lens setup and be as minimal as possible.

So, I have sold off all my previous gear and remain with just the X-Pro3 (with a 23mm F2) and X-Pro1 (with 7artisans 35mm F1.2), and it has been such a relief not thinking about other lenses.

So, for those of you that aren’t bothered with the new advanced features, AF speed accuracy and megapixels, I 1000% would recommend you to try it out and enjoying it.

In September 2016, I was approached by Fujifilm Middle East and given the opportunity to become their Bahrain-based Official Fujifilm X-Photographer. Ever since, I’ve often get asked by curious followers on Instagram direct on why I use Fujifilm cameras, or what camera I suggest to them. Nothing makes me happier as a Brand Ambassador for a camera company I have so much respect and admiration for.

The thing is, Fujifilm makes some of the most beautiful cameras ever made. Cameras that inspire you to go out and shoot, stunning colors, and dials that make photography much easier.

Yes, I may be biased, but hold a Fujifilm camera in your hand and tell me otherwise.
I DARE YOU!!

I have done landscapes, street life, portraits, products, architecture, macro and even a wedding and paid jobs with it, but it’s street and documentary photography that I enjoy using it most for, which are the best genres best fit for the X-Pro cameras.

Fujifilm JPEG files are amazing on whichever film simulation you use, but I usually end up editing in RAW. Capture One is the best software made for Fujifilm files, but I mostly use Lightroom Classic on my Macbook Pro because I’ve been used to its interface and simplicity for many years. The ease of use while editing in RAW is what stopped from jumping ship to a new software.

Since I’m a lover of black and white, the first step in editing I do is usually de-saturating my photos just to see how they look like in B&W, and then it’s all based on my mood.

Personally, I have a thing for the low-key style of editing. Highlights and shadows are my most two sliders being used while editing.
The reason why I love the low key style is because I feel they add mystery to the photos, something that I’ve been inspired by after being influenced by Fan Ho’s works.

As of recent, I’ve become more interested in documentary photography. I usually go out on a photo walk with a friend or two and have a specific aim each time. Recently it has been about documenting people and their professions, which is now unfortunately been postponed due to the Coronavirus pandemic.

Hopefully, I can get to complete it and share it with you all soon 🙂 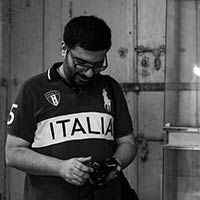 “I’m a street and freelance photographer based in and from Bahrain, also an Engineer-to-be and a Fujifilm X-Photographer and Official Brand Ambassador.”

"I’m a street and freelance photographer based in and from Bahrain, also an Engineer-to-be and a Fujifilm X-Photographer and Official Brand Ambassador."

Posted on July 9, 2020July 8, 2020by Alwin Kok
Before having a Fujifilm camera in my arsenal, little did I know that "colour" actually plays an important role in my photography life, and that is motivating me to shoot. Why do …
END_OF_DOCUMENT_TOKEN_TO_BE_REPLACED
Categories INSPIRATION

Posted on July 28, 2020July 28, 2020by Pavel Rybníček
Originally published in 2018 on the 21st edition of our monthly magazine, this interview with Pavel Rybníček debates his work as a portrait photographer, the switch to Fuji and wh…
END_OF_DOCUMENT_TOKEN_TO_BE_REPLACED
Categories INSPIRATION

Posted on July 16, 2020July 16, 2020by Giannis Angelakis
Some lessons I learnt from photographing at crowded beaches on the island of Crete: Limits can boost your creativity Some people restrict street photography at the streets. But I …
END_OF_DOCUMENT_TOKEN_TO_BE_REPLACED
Categories INSPIRATION

Why FujiFilm? The reasons I left Canon and Sony to go Mirrorless with Fuji

Posted on July 13, 2020July 13, 2020by Phillip Porto
Phil Porto is a Wedding photographer and videographer, using Fuji since 2016 for all his professional work. At that time, coming from Canon and Sony systems, Phil wrote an article…
END_OF_DOCUMENT_TOKEN_TO_BE_REPLACED