“Prepare yourselves.” – This was the advice of our guide, Marius, on our first night in Addis Ababa.

I knew what he meant by “raw”. We would be living rough, in a makeshift, temporary camp with no electricity, no running water, and no connectivity. But “raw” has another side too. Spending time in a genuinely untouched environment, far from our civilization, in a place that is out of reach and unseen by most people on the planet.

And now, here we were, living amongst the Suri people in the Omo Valley, experiencing their way of life, immersed in their daily routine. Discovering what raw really means.

It took 3 days of travel from Addis Ababa to reach the Omo. First, we flew to Jimma and from there, we continued by car. Moving from cities to towns, to villages, to… nowhere. On the final day of driving, we soon saw the last of paved roads. We chugged along on improvised dirt paths, obstructed by cowherds and muddy river streams. Our destination? Deep in the jungle with the Suri village spiraling a web around us in all directions.

The minute we arrived at the camp, Marius gave us some hopeful news.

“There’s a wedding in the village today. I’ve been coming here for 9 years and I’ve never seen a Suri wedding and neither has our local guide.”

“We’ll try to get permission from the chief to join in and photograph,” he said.

Half an hour later, after getting the official thumbs-up, we were making our way through the bushes on a goat trail headed towards the sounds of festivity. Women and children were dancing and singing for hours (maybe even days), while the men sat under an adjacent tree, watching. It was a genuine celebration of life and joy. Next day, there was a funeral thirty meters from our camp. Crying and mourning continued on into the night.

In the Omo Valley, it feels as if time has no meaning. Days, months, seasons and years are irrelevant in this timeless corner of the world. Same goes for the concept of money, or the modern angst that comes with the intellectual pursuit of the meaning of life and death. Here, it’s about life’s essentials. It’s about freedom and bare necessities. About being satisfied, joyful and surrounded by loved ones.

When we visited the eastern side of the Omo Valley, home to the Hammer, Karo, Dassanech and Mursi tribes, we saw clearly the impact of infrastructure, access to roads and tourism on the area. While the way of life is undeniably still very “raw” and untouched, we could sense that the minds and souls of the people had indeed been affected by the newer transplant of western ideologies and concepts.

For my trip into the raw, I decided to purchase and bring the GFX 50R along with a GF-45mm and a GF-110mm, using it as my main camera and lens set. I also brought the X-T2 and the XF 16-55mm as a backup camera but left my XF primes at home. One thing for certain, I missed my X-T2 during the trip. The GF system is not quick to focus, nor quick to shoot, and occasionally has issues focusing. It’s also quite hefty and bulky in comparison to the X-T2.

Don’t get me wrong; the camera is very light and portable in relation to its sensor size, and there is something very familiar about the dials and interface. It didn’t take me more than an hour to get very comfortable with the camera. It’s also super durable and rugged, and suits a rough, outdoor environment such as this one. I can’t say that I experienced any dramatic dust or water episodes, but I’m certain it can withstand harsh conditions just as well – if not better – than its APS-C cousins.

The GF system certainly makes you work harder for the images. Yet, when you finally take the shot and look at the outcome at the EVF, it makes it all worth it. The detail, the sharpness and the color rendition, not to mention that creamy bokeh and improved separation of the subjects. Nothing short of stunning.

I kept recalling my 2-month trip to China back in 2012, when I decided to leave my DSLR and lenses at home and only travel with the X100. It was slow and limited and made me work hard. But the sharpness and color rendered by that 23mm fixed lens were priceless, not to mention the form factor. There is some magic going on with Fujifilm in general; a definite sense of going back-to-your-roots when using their gear. You get a distinct feeling of being totally present and in touch as you interact with the surroundings. There’s something rather raw about it, in fact. Rather like the Omo.

The images were taken while on a trip to the Suri tribe in the Omo Valley.

The models were not dressed, simply recorded as they were.

No artificial lighting was used. These were taken within a dark tent with the light coming in from the entrance of the tent. 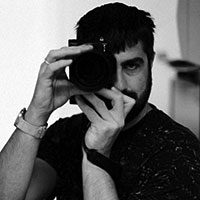 “I am just a regular guy who loves taking photographs of interesting places and cultures. I was fortunate enough to be able to spend a good amount of time traveling and I genuinely wish I will be able to keep on exploring this beautiful planet of ours. I live in Israel with my wife plus 3 kids and I’m always on the watch for my next adventure.”

"I am just a regular guy who loves taking photographs of interesting places and cultures. I was fortunate enough to be able to spend a good amount of time traveling and I genuinely wish I will be able to keep on exploring this beautiful planet of ours. I live in Israel with my wife plus 3 kids and I’m always on the watch for my next adventure."

Posted on April 22, 2021April 22, 2021by Alessandra Santangelo
My name is Alessandra. I was born in Sicily, Italy, and moved to Denmark with my family when I was 9 years old. I am currently living in the suburbs of Århus, with my two children…
END_OF_DOCUMENT_TOKEN_TO_BE_REPLACED
Categories INSPIRATION

Posted on April 20, 2021April 20, 2021by Miro Maršík
Miro Maršík, music composer and producer, started using his images as covers for his music. Photography quickly became a passion, and with his X-T4, he captures wonderful landscap…
END_OF_DOCUMENT_TOKEN_TO_BE_REPLACED
Categories INSPIRATION

Posted on April 15, 2021April 15, 2021by Alwin Kok
First of all, I would like to thank Mr. Keitaro So, Divisional Head of Fujifilm for providing the loan for X-S10 and XF18mm F1.4. The units were loaned from Fujifilm Asia Pacific …
END_OF_DOCUMENT_TOKEN_TO_BE_REPLACED
Categories INSPIRATION

Posted on April 9, 2021April 9, 2021by Leroy Souhuwat
It is the year 2018, I moved to Iceland, the land of fire and ice. Everyone might know it holds astonishing beauty in its nature. That also triggered me in buying my first camera …
END_OF_DOCUMENT_TOKEN_TO_BE_REPLACED