I work on torture prevention. Which is odd because I’m sure that when I grew up in Tasmania (at the end of the world) I didn’t know that there was such a thing. And I’m still not quite sure how I ended up spending my life travelling around the globe, visiting prisons and police stations and psychiatric hospitals and trying to make things a little less bad than they are.

I’m also a rock climber and an alpinist. Although that is easier to explain. When you grow up at the end of the world, there isn’t much to do except explore the wild places that surround you. To go out into the forests and mountains. And then, once you’re there, climbing is just a way to get a little higher and a little further than you could before.

And I’m also a photographer. Although that came much later. After all the rest. Once I realised that I had a unique opportunity to see things and meet people with stories that need to be told. So most of my photo work still revolves around the first thing. Around torture prevention. And around taking pictures of human rights and humanitarian organisations. Trying to tell stories of hope, even when the world seems to be a very dark place indeed.

So when FXP asked me to write about my landscape work, I scratched my head at first. Not sure how to approach it or what I could say. But I guess there are two things.

First, I think the most important lesson I ever learned as a photographer was to take my camera everywhere. I learnt this from Sean Tucker. To take it with you. All the time. To the office. To the shops. To get coffee. No matter where I’m going. Not only because you never know what you’re going to see but also because having a camera teaches you to spend your life looking. It teaches you to see the world in a different way.

That’s one of the reasons I love Fuji gear. With my X-T3 and a FUJINON XF 27mm F2.8 “pancake lens” I have something super light and super portable that still takes extraordinary images. That lens was the first lens I owned. Back when I started. And it is still one of the lenses that gets the most use. Fast and light are a mantra in climbing, especially in the mountains. But with that kind of set up, there is no reason not to take it.

Fuji gear is also bomb-proof. I’ve taken my kit out in horrendous weather. Banged it around on cliffs, in deserts, on glaciers. Dragged it to war zones and into prisons. And I’ve never felt like I have to worry. Cameras are tools to me. They’re there to work, not to sit in a box their whole lives.

I never understood camera collectors like that. With their special edition Leicas that haven’t shot a frame. For me, the scratches and the wear that I feel when I pick up my camera just remind me of all the places we’ve been and the cool stuff we’ve done. Then seeing that makes me want to just pick it up again and head back out.

And because I always have a camera with me, it means I sometimes get a good landscape shot. Just because I’m in the right place and I know my gear well enough that I can be fast when I need to be.

Second, I have a passion project on environmental defenders. Documenting the work that frontline activists are doing to protect the last wild places on Earth. Often putting themselves in extreme physical and legal danger to save what’s left. And here, while it is about people — so similar in a way to my human rights work — it is also about the natural world and it would feel weird to document the work they are doing without also trying my best to capture some of the extraordinary places they are battling to protect. The Tarkine in Tasmania. Bialowieza in Poland. Bears Ears in the US.

Like with human rights work, it also helps to have a small Fuji kit for this kind of project. Small for the documentary part of it. When you don’t want to be shoving a huge camera in someone’s face the whole time. Or you want to be subtle, when working around police or in sensitive situations.

But also serious but compact lenses, so that when you turn around to take a landscape, you have the option of a FUJINON XF 50-140mm F2.8 R LM OIS WR to pick out the simple beauty in a scene. Everyone always says you want to go wide for landscape but I shoot longer lenses more than anything. Rarely with filters. Rarely with a tripod.

As I write, it is late on an early autumn evening. Rain battering the skylights. But there’s my camera. Scuffed up dials. A patina on the corners. Waiting on the table. How heavy is that rain? I guess it is time to pick up the camera and go and find out. 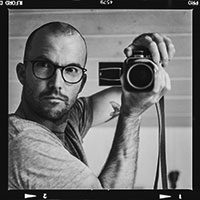 “From Tasmania but based in Switzerland, I am an internationally award-winning photographer and a senior advisor on torture prevention. I combine these two skill sets to take compelling images for human rights and humanitarian organisations. When I’m not working, I’m mostly climbing.”

"From Tasmania but based in Switzerland, I am an internationally award-winning photographer and a senior advisor on torture prevention. I combine these two skill sets to take compelling images for human rights and humanitarian organisations. When I’m not working, I’m mostly climbing."

We asked you to show us pictures of your Ex, and here are the results!

Posted on October 2, 2020October 2, 2020by fujixpassion
In this post that we published a while ago, we challenged our readers to show us pictures of their "Exes". And they did :) The responses were quite surprising. All with differe…
END_OF_DOCUMENT_TOKEN_TO_BE_REPLACED
Categories INSPIRATION

Posted on October 14, 2020October 13, 2020by Orlando Asson
Thank you, Orlando, for all your availability for this interview! Could you start by presenting yourself to our readers?Hey everyone! I first would like to thank Fuji X Passion Ma…
END_OF_DOCUMENT_TOKEN_TO_BE_REPLACED
Categories INSPIRATION

Posted on September 29, 2020September 28, 2020by Vincenzo Tasco
The Fujinon XF 90mm F2I currently use both systems. I have always used Nikon, shooting with a D4S full-frame reflex. Still, since one year I have been using Fuji, and I am about t…
END_OF_DOCUMENT_TOKEN_TO_BE_REPLACED
Categories INSPIRATION

Posted on September 27, 2020September 23, 2020by Marcelo de Coghlan
The friend's day, for us, is obviously every day we meet, and we really don't give much importance to the dates, except for the friend's day of the year 2019. Vicente López Royal …
END_OF_DOCUMENT_TOKEN_TO_BE_REPLACED