For several years now, I have used laptops to process my RAW files. I started with a PC and moved on to a Macbook because many professionals were using it. To my eye, images looked good on screen and my web page. It was only recently that a friend with a sharp eye pointed out that some of the images had a little yellow tint, probably caused by an ageing laptop screen.
The suggestion was to invest in a professional EIZO monitor, the gold standard in computer monitors. An expensive investment, no doubt. Finally biting the bullet, I got a 24-inch monitor, and I soon realised what I had missed all these years. Now there is much more detail, and even minor setting changes are clearly visible on the screen. The monitor comes with a calibration instrument, and if you use the monitor frequently, you will need to calibrate it at least once a month.
The EIZO, unlike other monitors, stores all settings, and so any other laptop plugged in will also enjoy the benefit of a calibrated screen. This is not the case with most other monitors, where the settings are stored on the laptop. The final images have much better colour, contrast and shadow detail and do justice to the output from your expensive camera.
I grew up on film, to be more precise Ilford PAN F, FP4, HP5+ and Kodak Kodachrome for slide. In 2002 I switched to digital with a Nikon D100 and 4 lenses. And 6 years ago, I moved from Nikon to a Fuji XPro1 with the XF10-24mm, XF18-55 and XF50-140mm lenses. I later added a 2x Fuji converter and a 30-year-old Nikon 105mm f4  macro lens with a Metabones adaptor that produces amazing images.
Now I use the X-E3, and it’s one amazing camera. I love the small size and the retro look. It may be small, but it delivers big results and amazing colour. A 24MP camera is more than enough to make an excellent 20×30 inch print. Few of us ever make prints larger than that. A 6-8 MP file is the equivalent of a 35mm frame in quality terms. So if you think about it, a 16-24MP camera is the equivalent of medium format film.
I own an old Rolleiflex 3,5 F made in 1953 before I was born. It was gifted to me, and I still use it for landscapes and portraits. It was recently CLA’d in the UK and fitted with a split-screen and a new mirror to make focusing easier. Film is back, but only for a few who can take the trouble to work slowly and plan their images. With 12 images a roll, the costs can increase quite fast.
Using film today is not cheap but it has its rewards. It’s not for the “spray and pray” crowd. The medium format Rolleiflex is a joy to use and the Tessar lens gives excellent images even at very large print sizes. The Rollei was for many decades the Rolls Royce of medium format, for photographers such as Richard Avedon, Gordon Parks, Cecil Beaton, Diane Arbus, Irving Penn, Robert Capa and others.
There are very limited film printing facilities in India. My Rolleiflex negatives are scanned on an Epson V600, or I photograph them with my tripod-mounted X-E3 and the Nikon macro lens by placing them over a lightbox. The files are then processed in Affinity. My camera setting is Highlight -1 and shadow -1 in order to capture all the details.
I shoot RAW+JPG. The OOC jpegs are mainly for my web page. The RAW is saved for high-quality processing for International exhibitions and magazine applications. The post-processing is done on a Macbook Air with 8 GB RAM running Affinity and NIK plugins. Of course, 16 Gb would be preferable… I switched to Affinity some years ago for its one-time licence fee, and Serif provides upgrades from time to time. It works very well with all types of RAW files. I tried processing some Fuji 100MP test files, and they worked well with 8 GB RAM.
I have been seeing the reviews of the Apple M1 processor and have just bought the new 2021 Macbook Air with the M1 and 512 GB SSD. The price in India was double what I paid 4 years ago for my Macbook Air. However, the hard disk is now SSD which is very expensive.
Being new, some of the old plugins such as NIX will not work. You also need an updated Affinity that can run on the M1 processor. No doubt, in time, all existing software will be compatible with the M1. However, I was disappointed to see that on the new Macbook Air, sockets for the flashcard and external HDMI monitor were missing and now I need an external adaptor to enable these to work.
About the images from this article:
Taken on Fuji X-Pro1 and X-E3. The dance images are by stage light during a show. The seascapes are all taken at Kovalam, a rocky beach area about 40km from Chennai, where I now live. It’s a popular spot for photographers. The images are at slow speeds with the camera on a Manfrotto tripod and a cable release.
The image of the two fishermen silhouetted is from the mid-1970s and shot on Ilford FP4 on a Nikon, and the negative scanned using my macro lens as described. The image was later solarised. The image of the two boys early morning is also a film scan which was digitally processed. 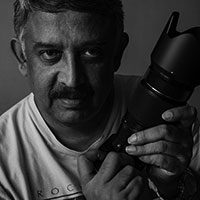 Ashok Viswanathan is a retired company executive living in Chennai, India, and passionate about photography. He started with film in the early ’70s and continues to mix the traditional format with digital. A regular exhibitor at national and international exhibitions and has been honoured with distinctions from the FIP India, FIAP Europe and the PSA. Besides exhibiting his work, he has a considerable body of published work in magazines and the web. His interest is in travel, landscape, portrait, culture and fine art image.

Ashok Viswanathan is a retired company executive living in Chennai, India, and passionate about photography. He started with film in the early '70s and continues to mix the traditional format with digital. A regular exhibitor at national and international exhibitions and has been honoured with distinctions from the FIP India, FIAP Europe and the PSA. Besides exhibiting his work, he has a considerable body of published work in magazines and the web. His interest is in travel, landscape, portrait, culture and fine art image.

Reportages about your craft, by a craftsman

Posted on June 9, 2021June 9, 2021by Robert Kalb
As a trained carpenter and photographer, I have specialised in photographic reports in the field of traditions, culinary and handicraft. All photographs are taken without "prepara…
END_OF_DOCUMENT_TOKEN_TO_BE_REPLACED
Categories INSPIRATION

The story of my story

Posted on May 31, 2021May 31, 2021by Christian Vaccaro
My name is Christian Vaccaro, I’m 19-year-old, and I live near Milan. I attended art school, where I cultivated my passion for art, drawing and photography. Here I had the oppo…
END_OF_DOCUMENT_TOKEN_TO_BE_REPLACED
Categories INSPIRATION

The photographer who used to leave the lights at home

Posted on May 28, 2021May 28, 2021by Ciro Palomba
Working as a software/web developer, Ciro Palomba, from Napoli, started with photography for its technological aspect. But he kept experimenting and slowly started to get into por…
END_OF_DOCUMENT_TOKEN_TO_BE_REPLACED
Categories INSPIRATION

Posted on May 18, 2021May 18, 2021by Johan Otterdahl Edfeldt
Born in Sweden, Johan is a citizen of the world. Music, Photography, Dance, among others, his passions are many, becoming indistinguishable between hobbies and work.Enchanted by h…
END_OF_DOCUMENT_TOKEN_TO_BE_REPLACED