Advertisers will always do their utmost to prize away your ‘hard earned,’ attempting to satisfy that wish list. Its what they do!

It may well be that some of you reading this, may be considering a camera either as an upgrade or a first time purchase.

Throughout the year, I regularly receive emails seeking my advice on which lens or camera to go for. Should you be seeking an upgrade my first question is, “What is wrong with what you have? Are you really getting the most from it?” I’ll expand upon that later.

If it is a new acquisition and they you going to enter the world of photography as a hobby, then it all depends on what your requirements will be. You are spoiled for choice and it really does depend upon your need, not forgetting your budget.

Mainly known for my landscape work, the requests usually come from the outdoor fraternity. Chances are that you will love the outdoors too. So, the question you should ask yourself is, “What do I want to get from my photography?”

I guess it will probably be more than just memory shots? Usually, the response is, “I want something to be proud of to hang on the living room wall.”

To do that, you can’t simply rely on the camera. It’s about ‘you’, your eye, your understanding of the kit and how you use it. After all I can’t think of an oven that went to the shop, gathered ingredients, blended them and cooked a meal all by itself! It needs the chef!

I know we can all ‘fluke one’ and be in the right place at the right time but if it was that simple and the camera really did it all, then we would all be professional photographers…

Personally, I am lucky to utilise two set ups. One for working at lower levels, which is a larger, heavier, Canon full frame camera and one for ascending and up the tops. I chose a camera that would be easy for me to carry up on the higher fells without overloading my bag and selected one of the new generation Fuji mirror less cameras. I have the X Pro 1 which is akin to an older style film camera but is a great piece of kit.

Most of you won’t have the requirement or luxury of having several kits but will definitely spend the majority of their time going upwards. That’s where the weight and portability come in. You won’t be compromising much either as I have to say that difference in quality, especially to an A3 print is minimal. Don’t get me wrong it would be folly of me to say they are just the same. They aren’t but the mirror less are improving rapidly and are worth your time and investment.

So what should you be looking for and what will give you the best quality and results?

Whilst I won’t recommend a definitive model, I do have a personal liking for specifics on the camera to make life easier.

Easy access to the important buttons and facilities are a case in point. Some are buried in menus. I personally would avoid those. Viewfinders are a must for me, as they remove all distractions and present you with the same picture that the viewer will see. Without one, you will be holding a camera at arms length, only having an LCD to look through. It has spawned the new generation and name (not my doing by the way), ‘zombie photographers’! They stand there, arms outstretched, moving around slowly as they look for the best view through a light affected LCD screen. We have all seen them and they seem to come to weddings in droves ha ha!

So for me, I prefer a viewfinder. Some of the cameras now allow you to buy one at a later date as an ‘add on’. When that model is usually due for an upgrade, it is not unusual for them to offer them as apart of the deal. Well worth looking for.

Manufacturers all want to ‘out do’ their competitors. That is business. You know the sort of thing, “ours has three gangly switches compared to ‘theirs’ that only has one” and ” Yes sir/madam but can you get it in yellow?”

A bit glib I know.

Many of the new breed of cameras now have a myriad of facilities buried in menus such as effects, 4K and HD video, HDR, black and white, panoramas which are all added to make this model more attractive than the last.

I can recall when all we had on cameras was the ‘holy trinity’. Aperture, Speed and Focus.Ok well there was ASA too, (now known as ISO) but you get my drift. Other than that it was you, the scene or subject and the ‘three’ others to get the pix.

People who watch me work know that I only use those allied with the respective grad to balance out the limitations of the camera. No tricks or gimmicks.
It isn’t all about full frame or megapixels either.

These two images were taken with my two cameras. One is 24m at full frame and the other 18m with a crop sensor of 1.6.

Which is which? Both of them enlarge beautifully to over three feet wide. I shall tell you at the end of the blog. 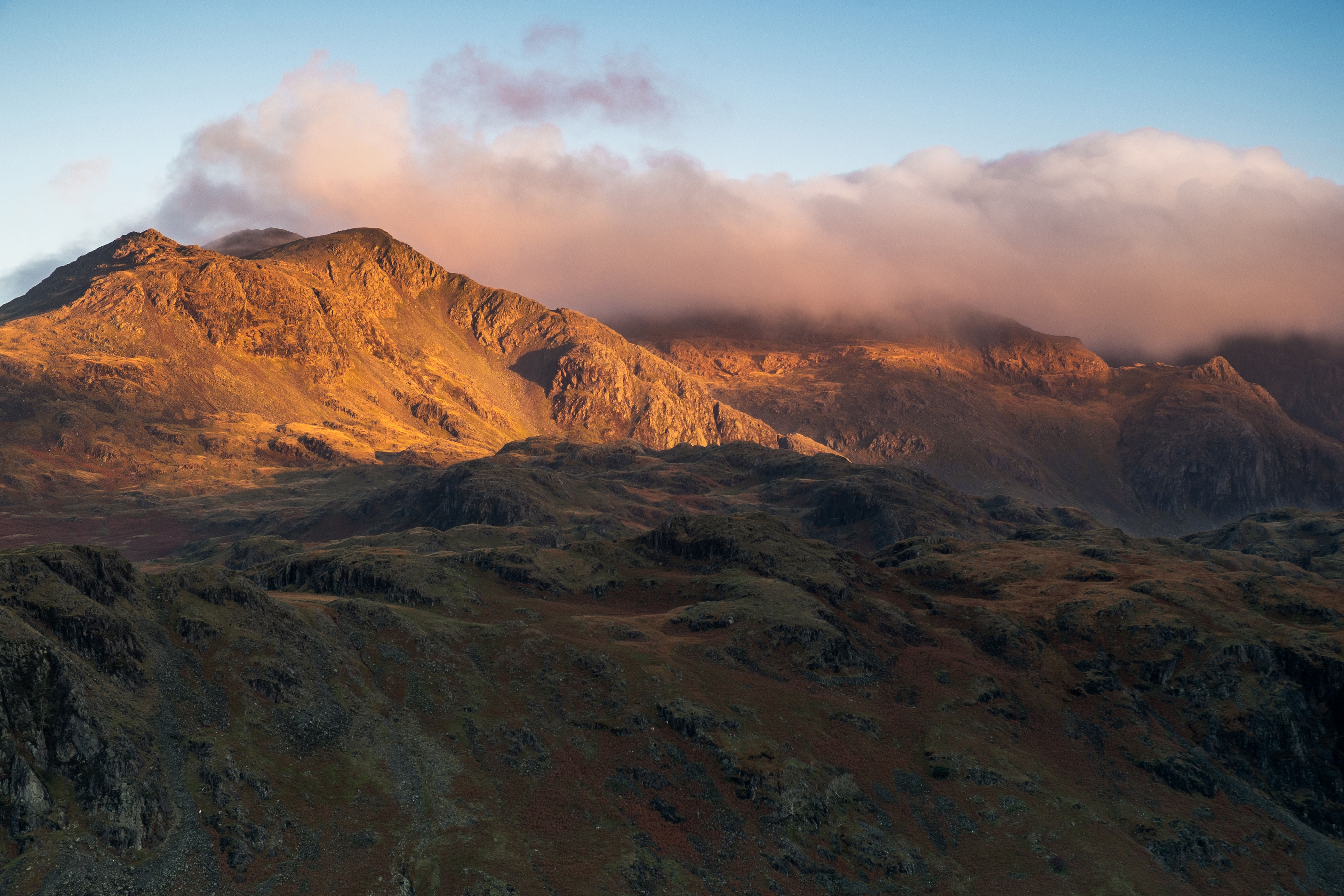 Looking Towards Slight Side at Dawn

Difficult to tell and for me, the new generation of mirror less cameras are the way to go forward. They are smaller, lighter and pack a great punch. As an all rounder, that’s what I would look at. Not a compact but a mirror less DSLR. Your budget will dictate but be prepared to part with £450+ and not be disappointed. These will allow you to add lenses to your kit if you really get into it and that’s a consideration.

It may well be that you enjoy adding to social media and so ‘wi fi’ might also be something you’d like to have within the camera. Many have this now and transfer images ‘on the hoof’ to phones and upload immediately. You will need a phone signal though. Can be tricky in some places as you will already be aware of.
With these, you can change lenses but most people tend to opt for a zoom such as an 18-55 which will give you a good range to capture most landscape images. I take that combination with me when I shoot my ‘abroad stuff’ for Monarch Airlines and it has always managed to satisfy the needs of the client.

It may be that a compact with a large zoom will suffice. I have seen some superb images taken on them but there are compromises. They are, as the name suggests, compact and these tend to be operated using menu driven facilities and multi use buttons. They can be fiddly to some people and if you are wearing gloves a tad difficult to use. However it may be that it fits the bill for your needs. That is a key throughout all of this advice. Your own personal needs. Sauce for the Gander etc…

So what if you already have a camera? It may be a few years old and you just want to upgrade but is that really necessary?

Only last night I received an email saying, “I have a DSLR that is about five years old now. Weighs a ton when I am out walking and have seen this new camera, what do you think?”

In cases like this, I give my usual response, “What do you want it for?” I run through some of the aforementioned advice but you really do have to ask what are you going to gain?

We live in an instant world. We want it as easy as we can without thinking and apply that logic to a camera.

It doesn’t work that way.

Unless you are in a position where the light is perfect and the scene is lit well then you will have to ‘work’ the camera. Forget what the salesperson or literature says, cameras can’t be all things and deliver all scenes they look at without help and understanding their capabilities.

It is not unusual for people who attend my workshops to turn up with a fine array of equipment. Camera bags loaded to the max. We sit down and then before we start, they will tell me about themselves, their intentions and then begin bemoaning the capabilities of their camera, stating, “really looking forward to this and once we have done the course, I am going to treat myself to new kit.” I can honestly say that in the majority of cases they complete their time with me and declare, ” you have saved me a lot of money. I now realise it was me!”

The reason for telling you all this is not an advert for my workshops, (although you can book here if you like ha ha) but to point out that before you jump in and spend, literally sit back and look at whether you really do need to upgrade.

What is it not doing that another camera would do for you? Bear in mind that it is you that really makes it sing and dance.

Having more and more megapixels won’t make you a better photographer. It is how you approach the scene you are looking at and your knowledge that allow you to capture it. No matter what the camera.

The usual response I get back, when I ask, “whats the problem with your camera,” revolves around the complexity of the manual being hard to digest coupled with, “it just won’t do what I want it too. What I see through the viewfinder isn’t what I capture. I thought this digital lark was supposed to be easy?”

Do you think changing the camera will make it any easier? The new ‘do it all technology’ is just that? It isn’t.

As I said before, if it was, wouldn’t we all be professional photographers…

If you are looking at developing your skills as a photographer you must consider if the costs of the new kit outweigh the benefits?

If you have already gone past that and are still frustrated at your lack of wow pictures then literally go back to basics.

Most of the pro’s I know literally only ever change their kit when it really is necessary and only when the benefits really do outweigh the costs. Not only that but they rarely dispose of the existing equipment.

So to sum up, yes there are some great cameras out there and most can be of use to you. Some more than others but never forget this, the one component that makes it all work is you. We do have to knuckle down and get to grips with it. Walk before we can run. Oh yes and part with that hard earned cash when all things have been considered. Not being condescending but helpful.

Have fun and chose wisely but just as importantly enjoy your photography!!

*The first image is taken on the 24m full frame camera